Hey everyone. I've been reading all the posts on here for months, thanks for the great advice and info. We've got two 10-11 week old pullets, an EE and a Delaware, that we raised from chicks. The other day I was doing some work in the backyard and heard what sounded like a faint rooster crow... Ooops... I watched the birds for a while and I'm pretty sure it was the Delaware. She's shown no other rooster-like behavior.

I went online and found topics here about crowing hens, but it seems like it's usually older birds. I sent photos of her to the store I bought the chicks at - they said they think she looks like a hen, but nothing certain. I also sent pics to a friend who's got a big flock, she pretty much said the same thing, but wasn't too familiar with Delawares. I'm hoping you experts can give some advice. It seems like there's variation in Delawares that might be making it harder to tell?

We're in the suburbs and can't have a rooster, so if she's a he, I'd like to start making plans to re-home him ASAP. She doesn't like me standing next to her so these are the best pics I could get. 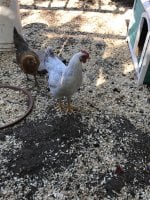 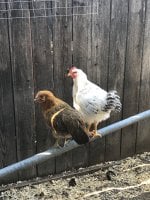 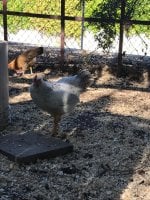 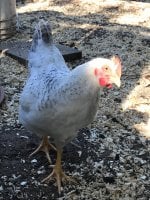 Looks like a pullet to me. I had a crowing pullet (positive), it wasn't old & hadn't even started laying yet. I did some research & asked around here, seems at times the dominate pullet/hen will take on the "male" role....Crowing. Thought she'd out grow it but she had to go, lucky for me the person I got her from took her back & once put with a male stopped crowing....Go figure

At 10-11 weeks that's a cockerel. Gender differentiated saddle and hackle feathers will develop in the next few weeks

Crowing hens happen but it's rare. If you hear a crow, especially young, it's safe to assume it's a boy.

When should I let my 7 week old pullets sleep with the flock?

What are Lavender Orpington chicks supposed to look like?
4 5 6