Are my 2 ducks both drakes?

I know this is difficult for you all to answer because I'm unable to post pics, but any advice would be appreciated.......

I have two ducks which were given to me quite a while back. They were hatched together about five months ago. When I got them, one was significantly bigger than the other, but now they are both the same size, and 100% identical in every way. They are both pure white with some black speckling on the top of their heads, and both have what appears to be a red fleshy growth on the top of their beaks, or let's just say it's similar a chicken's comb and wattles, only much bigger and fleshier. As they are both 100% identical, I know they must certainly be the same sex, that is, both males, or both females.

Now for their behavior............The have never yet quacked, but instead, they make a strange hissing noise, and they do this all day everyday while they both constantly harass one of my large hens. When my roosters tries to intervene, they attack him, and they actually work as a team in order to get him cornered. They have also both tried on several occasions to mount the hen they chase around all day. When they do manage to get her, they don't fight, but instead, they try to mate with her.

Now, I believe they are both drakes, but my father in law doesn't seem to think so because they always hang out together. Like I say, they are 100% identical in every way. BTW......the one has also recently started hissing at me

So, depending on the answers I get here, they will either go on making my chickens lives hell, or they will be slaughtered before the sun sets. I only agreed to take them for the sake of getting eggs, and since the time we got them, it was always our intention to eat them if they turned out to be males.

Look forward to any and all replies

They sound like male muscovy ducks. They are quite tasty.

You have two muscovy drakes. Seperate them from the chickns before they injure or kill the hen.

Wow, thanks for the quick replies. I never even knew you get white Muscovy ducks

Anyways, I just googled it and yes, mine are white Muscovy ducks

Also, thanks for confirming my suspicions about them both being males. I never knew ducks could be so aggressive, but oh well, you live and learn. So, I guess we'll be eating some fresh duck soon, but at least they've had a great life.

Strange how they have only taken a fancy to my one and only very large hen. They don't seem to be bothered with the others. In fact, I was quite surprised to see them go for my rooster who is a very large Shamo. Hell, I wouldn't even want to fight with my rooster, not that I have to though, because he's a true gentleman. Fortunately he's quicker than the ducks, so up until now, they haven't managed to harm him.

Once again, thanks for the advice

Many years ago (I refuse to divulge how many.

) I had a muscovy drake kill a very large RIR rooster. As big as your Shamo is, two drakes are capable of killing him. By breeding the hen, they can cause a cloacal prolapse, dislocated hips, or conceivably even a fractured pelvis. Young muscovy drakes make for some great eating.

I got a pair of muscovy last year, but they didn't last long as the drake tore up one of my female runners. I did very much enjoy them though. 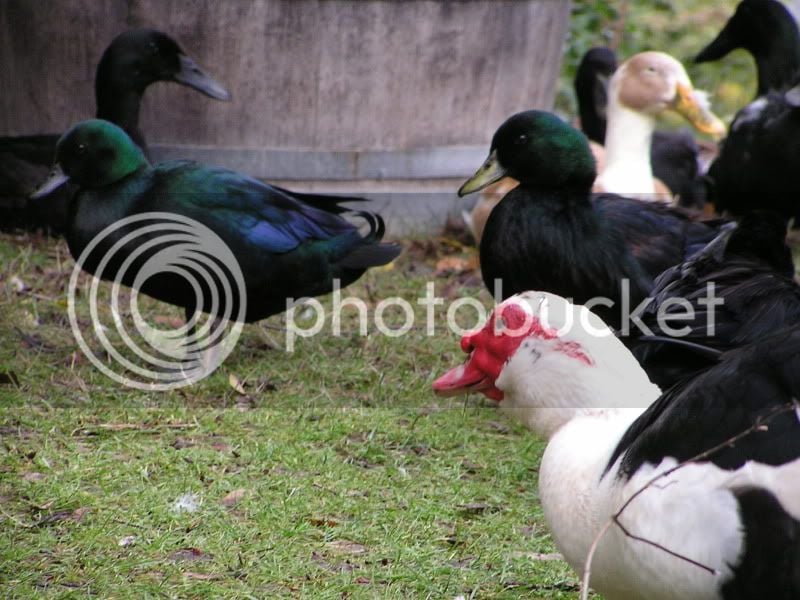 Mrs. Muscovy once again busted on top of my car. It was her favorite perching place: 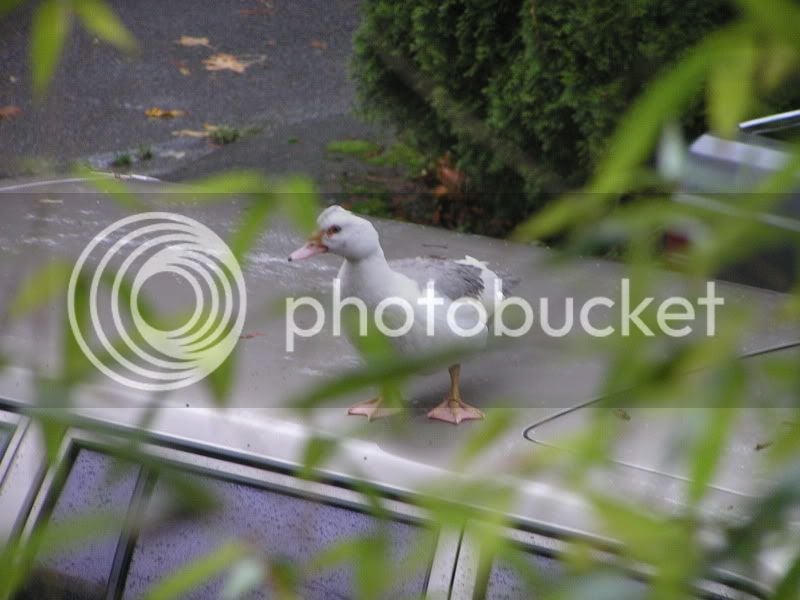 Yes, my Shamo seems to know he must avoid them. He does however distract them when they are after the hen, so at least he's trying to help his girl. I was really surprised though to see how fast they can move when they want to, because they usually just waddle around at a snail's pace

The last time I weighed them, the were a touch 2.9kg's but I think they would be slightly more by now. I'm looking forward to eating them, although I'm dreading the processing bit because I've hear it can be quite a job. Fortunately my father in law is here today, so perhaps he can help

Oh, and my DW doesn't mind helping so long as someone else does the killing part.

Like I said, they are about five months old, or just under.

Well, I had better go and start with the preparations

Quote:
Sorry for a derail but that last pic, at a glance, looks JUST LIKE a Seagull

P
Keeping males together in sight of females?

Drake is banned from the duck barn