Bit off more than we could chew 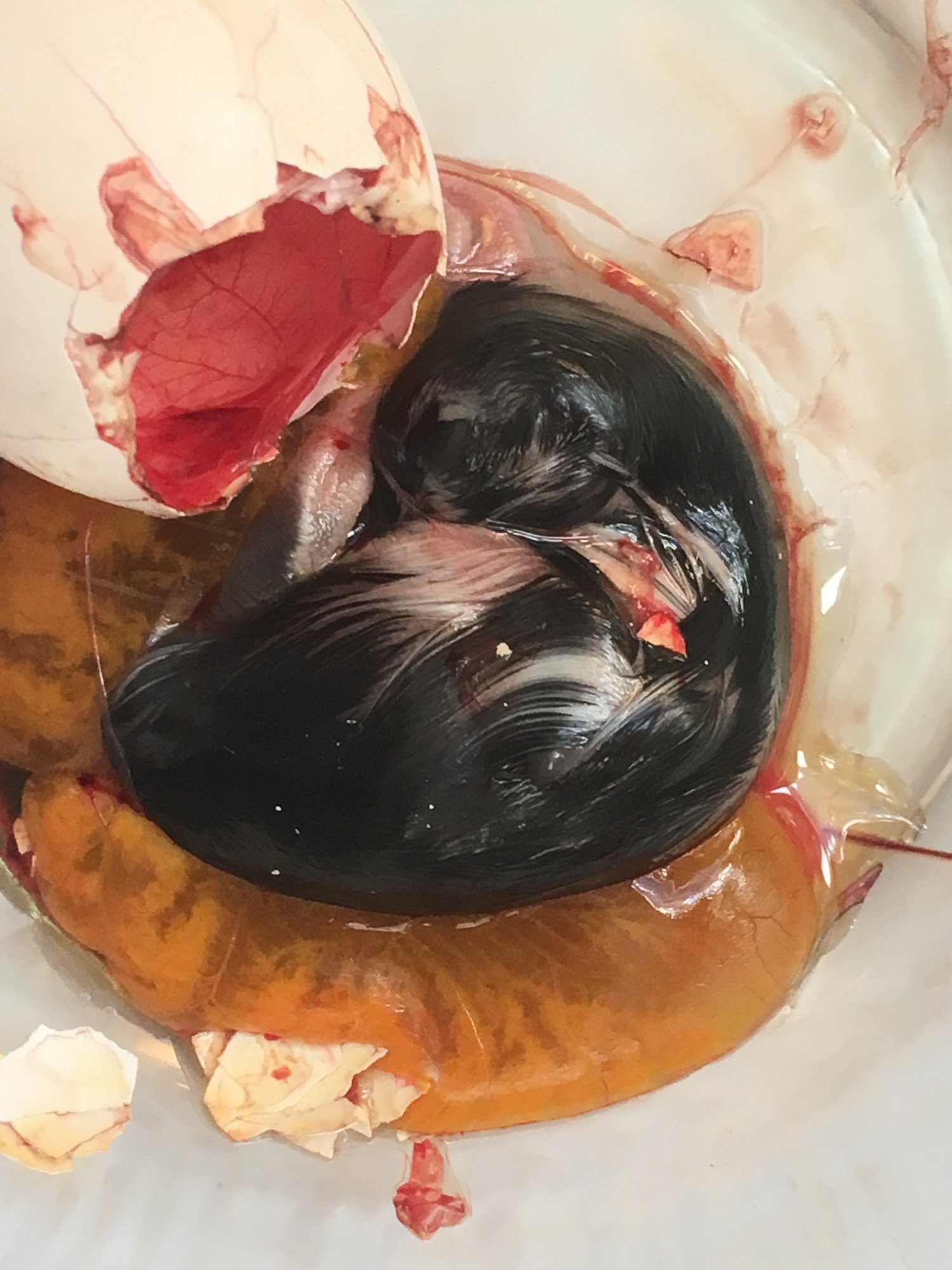 Hi! We are barely into our first experience raising/keeping chickens and we've already been thrown a curve ball. We live in the Sacramento valley in California and started with one very beautiful jersey giant roo who was given to us. Shortly after his arrival, we were given 2 hens (absolutely no idea what breed) to keep our roo company. Everything was well till our landlord (who lives just across the field from us) asked that we get rid of the roo because of the crowing

. Our 6 year old daughter was so sad about the rooster so we opted to pick up 6 chicks from tractor supply just before they ran out and raising these babies has been such a delight!

We got rid of the roo and picked up the chicks in the last week of April. About 2 1/2 weeks ago my husband was out closing up the coop for the evening when he noticed one of our two hens was missing. To make a long story short, we ended up finding her and 14 eggs under a tool cart. Turns out 4 of the 14 were fertile! I returned the 4 developing eggs to her nest in hopes that something might come of them. I candled them a week ago and one had a blood ring clearly visible so I got rid of it but the other three were still good as far as I could tell. My husband had me convinced that there was no way these embryos could still be alive because they're a month and a half old so pulled them from the nest and ignorantly cracked into one to see what the dead embryo looked like. After I gently removed the chick from the egg, I was horrified to see it actually start moving!! I felt terrible!!! Needless to say, I quickly returned the other two to the nest hoping it wasn't too late. That was 4 days ago. Here is a picture of the embryo. Maybe someone can tell how far along it was and how I can verify the other too might still be alive since there has been no signs of hatching that I can tell. Any advise would be greatly appreciated!!

That is almost a fully developed chick. I hope this isn't too graphic of a chart to post.

Going by this chart, I'd guess 17-18 days old approximately. There is still a fair bit of yoke to be absorbed, but the chick itself is proportionally formed. 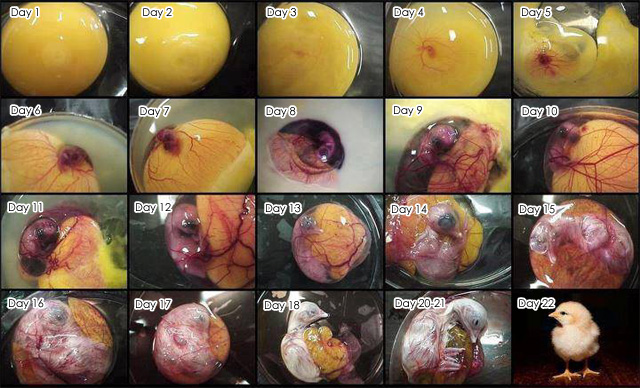 Sorry about the picture delay...I was experiencing technical difficulties.

I also want to say that I'm sorry to hear about having to get rid of your rooster and about your chick.

In regards to the eggs being fertile...a rooster's sperm can remain viable for up to a month inside a hen...so the hen's eggs can still be fertile in that amount of time. Usually 2-3 weeks is a more common amount of time for eggs to be produced and still be fertile, but breeders wait 1 month before exposing the hen to a new rooster to ensure the sperm from the original rooster is no longer viable and fertilizing the eggs.

A hen will lay a clutch of eggs, which may take up to 10 days to 2 weeks depending on the breed. Those eggs stay viable for that amount of time. Eggs being incubated in an incubator are usually set by 10 -14 days for the best hatching rate. My first attempt at hatching was to try to preserve the genetics of my predated hens. The three eggs I managed to hatch were approximately 4 weeks by the time I set them. They had sat in the barn for two weeks because I had hoped some of the hens would set and approximately two weeks before I made an incubator. So it is entirely possible in your time frame to be getting eggs almost ready to hatch.

You can candle the eggs. That means using a flashlight and holding it to the developing egg in the dark and looking for live eggs. At this point you should see that the eggs are mostly filled with chick, you "may" see veins and you'll see the air cell at the fat end of the egg.

The visual appearance of the size of air cell that should be showing for the related days. 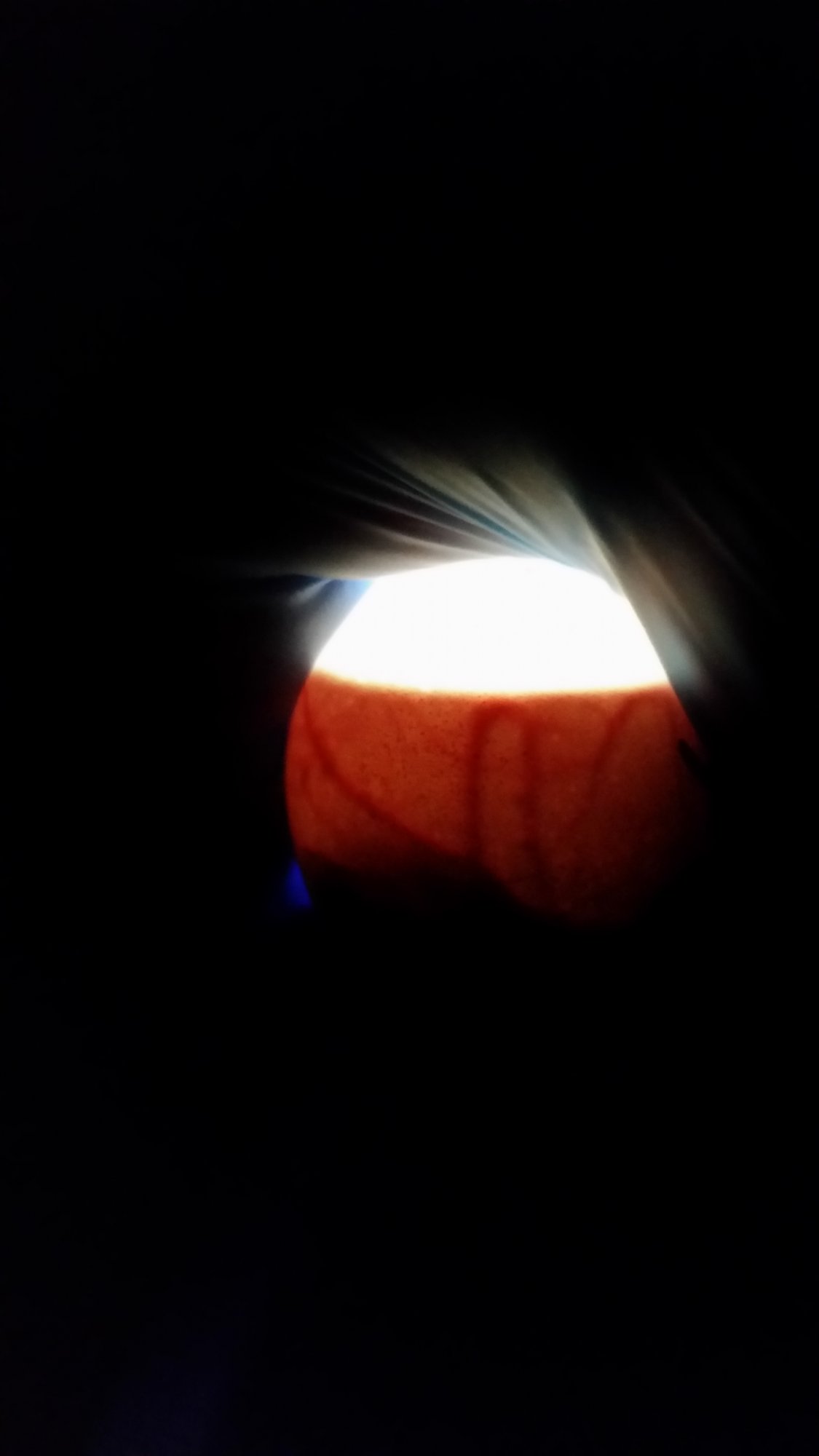 Above is an egg with a flashlight being held from the top to illuminate inside. It shows the air cell and veins (although veins won't be as visible) This egg is not as far along as yours.

Here's an egg where the embryo's died. 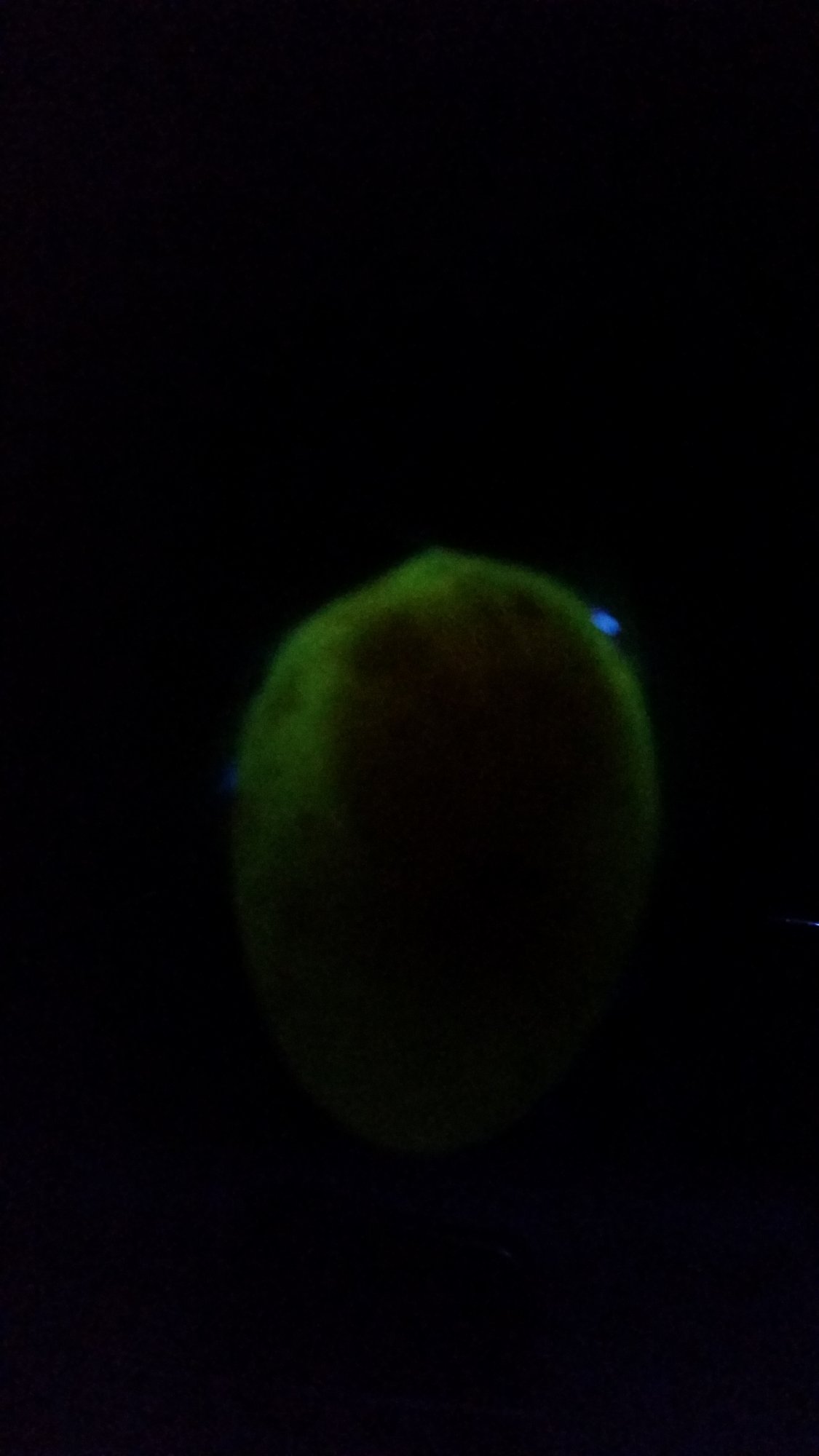 I use a dollar store led flashlight. I hope this gives a bit of an idea of what you may see.

Everybody makes mistakes. There are lots of people on here who have dropped eggs or done the wrong thing so don't feel too bad. You learn from your mistakes. Fingers crossed the other two eggs hatch for you (and they turn out to be girls)!

Ok....wow that long after the roo has been with her then? So this peaks my curiousity about the other 10 eggs she was sitting on before I pulled them. I candled all 14 eggs originally and left 4 because they clearly were developing inside. I put the rest in the fridge in case I learned we could still eat them. My question now is: could these eggs still be incubated and quite possibly hatched?

Ahalestorm said:
Ok....wow that long after the roo has been with her then? So this peaks my curiousity about the other 10 eggs she was sitting on before I pulled them. I candled all 14 eggs originally and left 4 because they clearly were developing inside. I put the rest in the fridge in case I learned we could still eat them. My question now is: could these eggs still be incubated and quite possibly hatched?
Click to expand...

Oh and the other two look exactly like they should when I candled them just before I opened the one: almost all chick with a perfect air pocket on the big end. Is it ok to move them with the hen into her own enclosure then since they haven't hatched yet? I'm really going to have to improvise since our 6 almost fully grown chicks occupy half of the coop which is divided off from where my hens are. Then should I leave the chicks for momma hen to raise or should I put them in a brooder and do myself? lol I'm so unprepared for this!

It's ok to move her as long that doesn't disrupt her and she won't settle on the eggs. Sometimes that can happen. I've had broodies where I wanted to move them and their eggs and they weren't having any of it...lol. All they do is run back to the previous nest and sit on it whether there's eggs or not.

Whether you leave the chicks with the mother is up to you. It depends what works best/is most convenient for you. I've read where someone had chicks in the same area as the broody hen and her chicks. The broody hen stayed with her chicks and the other chicks just stayed away from her. It also depends on how much room they have together as well. If it's too small that will cause problems...she may attack them because they're just too close. I have a broody right now that I'm trying to decide on whether I should take the keets away or not...lol.

If you take the chicks away once they hatch...you'll have to integrate them back into the flock later. You're already familiar with this since you're doing it right now. Some people feel it's extra and prefer to leave the chicks with the hen.

As far as the 10 eggs...I'm assuming they didn't develop because they're not fertile. Or are you thinking other hens laid eggs in her nest? I would think any eggs now that haven't developed by now won't develop. Plus, if they'd been set on for several days and then put in the fridge for over a day...I don't think they'd be viable anymore.

In my case the three chicks I hatched were the only ones that made it out of a large pail of eggs, which at best guestimate could have been anywhere in the 80-120 range of eggs.

As far as the eggs in the fridge for eating, I won't eat eggs that have been in the nest boxes for the day. If I go away and I have broody hens, I gather those eggs that night and feed those eggs to the livestock. I'm quite picky about that...I sell my eggs as well. If you don't know how long they were set on...I wouldn't think they'd be safe.
Last edited: Jun 8, 2017

Thank you so much for all the info! The thing about this hen is she's hardly tame at all. She was given to us as an adult so she's quite skittish. We just got home to find her off her eggs and to our surprise, one of the eggs has started to hatch!! I think I'm not going to move her but have a space ready for her and the chicks. I don't really know how I'm going to get them in there. Any clever suggestions will be greatly appreciated!

Your welcome...lol. Ohhh..the skittish ones make it tougher. It sounds like you have a good plan there with leaving her on the nest until the eggs hatch. The more skittish hens won't usually work with a person if one tries to do anything with them when their setting.

How do you mean fit them in there? Into the coop as far as size or just getting her to move? How big is your coop?

I decided to take the four white keets from my broody hen and I left her with one. We're busy and I don't have the time or space to fuss with extra stuff at this moment. This is her first time raising babies. Leaving just one baby mitigates the risk of losing all the keets. I already have incubator chicks and keets in the laundry under lights so I'm already set up. I see the one keet's leg is swollen so it must have gotten injured. I can keet my eye on the one keet better than trying to make sure she has all five.

We plan on moving the chickens to another building in the yard, eventually...and it's bigger and split into sections. I'll have more room and the ability to keep them safe and under watch in one of those pens. I can do more next year...lol.

If you need to move her do so a bit after dark once she's asleep. Then she has all night in a new position and should wake up thinking she's been there all along, plus she should be easier to handle while sleepy. I'd wait until the chicks have hatched as then she should be distracted by looking after them rather than worried her nest has moved.

egg stepped on, chick breathing, anything I can do?

S
Help! Momma got off eggs!