Hey y’all!
Long time lurker, first time poster.
I have this lovely 3 year old runner duck named Bee, and she’s a bit of a medical mystery.
Her stomach is incredibly distended/bloated/fat, and neither my vet or myself can figure out why. It’s concerning me because her little butt drags on the ground, which is unusual for a runner— I’ve yet to find a picture of one as “chubby” as she is.
Her belly feels hard and often develops bald patches. It doesn’t seem to bother her, but something doesn’t feel right to me.
She’s had x-rays done, and the vet told me that the mass was “all uniform,” which suggested it might be fat. Her top half feels skinny, though, so I’m not sold on the idea. I’d also like to note that in the past she has had a large keratin cyst in her belly, a ruptured egg in her vent, and she always has a runny nose. She’s also gone white real early from all the stress
Any ideas of what might be going on with my bird or suggestions of what to do/test are greatly appreciated!
Thanks!!

Does she lay eggs regularly? What do you feed her? Can you get a few pictures of her?

Sounds like the only way to find out would be an exploratory laparotomy (open the abdomen and look.) She apparently has multiple anomalies. Unless you are willing & able to spend the money, and your (or another) vet feels confident he/she can successfully operate, keep her happy and keep your eye on her; euthanasia is better early than when they're suffering. A short happy life if much better than a longer miserable one. Best of luck to you and her.

Does she lay eggs regularly? What do you feed her? Can you get a few pictures of her?
Click to expand...

She hasn’t laid eggs in around a year, I’d say. Last we had was the collapsed egg around 7 months ago. That egg was in there for a while, though— vet saw a developing egg in March, it came out in May. This makes me think that it could be another egg, but it’s been a gradual gaining of weight, and she’s acting just fine. It’s just that she’s too big! She can’t walk properly, and she hasn’t been able to climb into the pool in months!
All three of my birds eat the same things. Right now they’re on layer feed, but they enjoy a good amount of lettuce and fruits. My mom also likes to give them dog kibble to snack on.
Here’s a picture of the little baby begging for watermelon this evening: 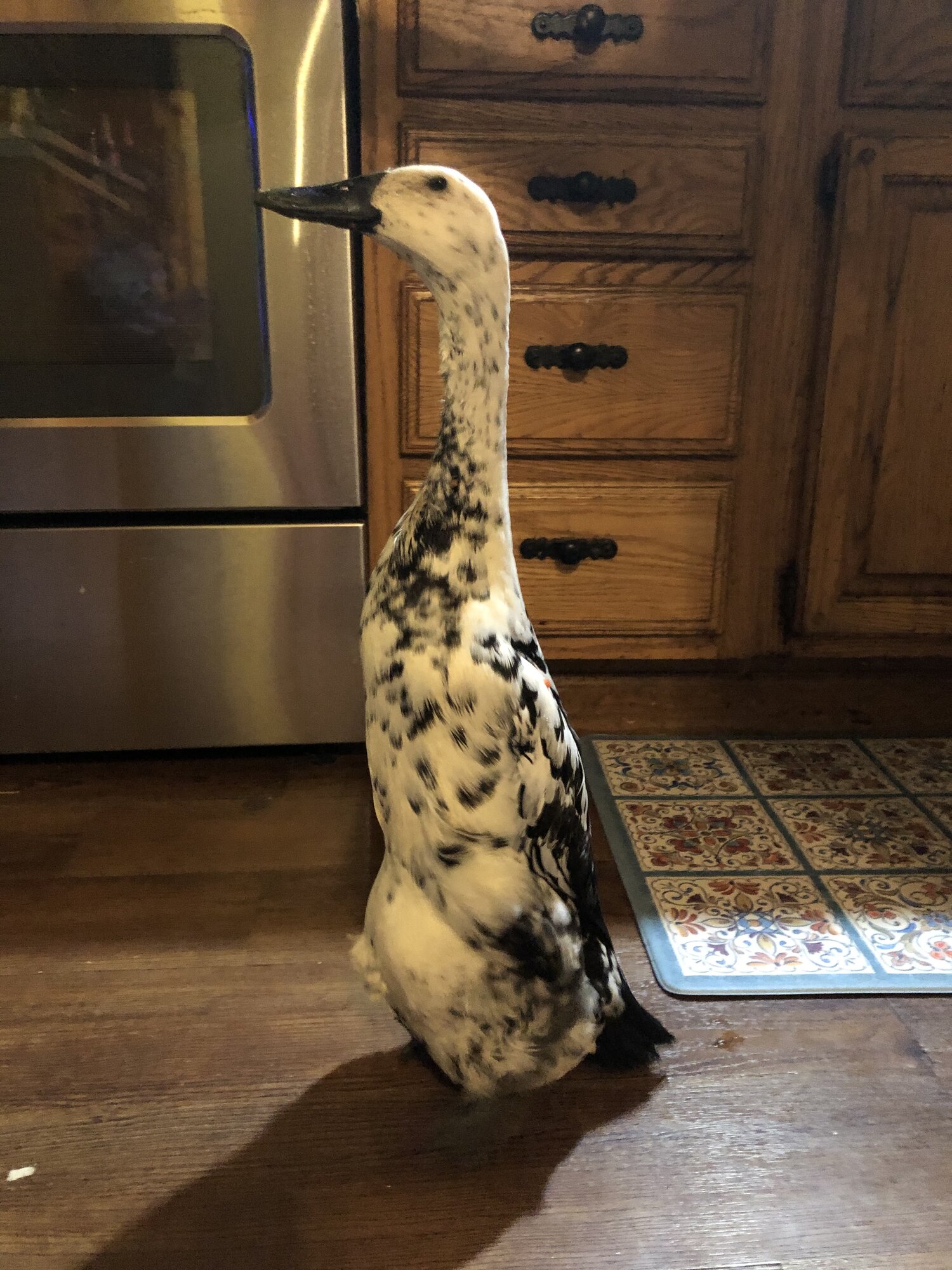 Oh my bless her heart. I have never seen one like this. If belly is hard most likely Isn’t fluid build up. Sure looks like it could be a tumor or fluid. I’d like for @casportpony to look at this lil one.

Miss Lydia said:
Oh my bless her heart. I have never seen one like this. If belly is hard most likely Isn’t fluid build up. Sure looks like it could be a tumor or fluid. I’d like for @casportpony to look at this lil one.
Click to expand...

I originally thought it might be fluid buildup because the majority had some squish to it— it feels taut like a drum— but there are bits that are extra squishy or extra hard.

I guess it could still be fluid is it possible to get the vet to try to draw off some fluid? How long has this been going on?

Miss Lydia said:
I guess it could still be fluid is it possible to get the vet to try to draw off some fluid? How long has this been going on?
Click to expand...

She’s been getting bigger and bigger for about a year and a half, I’d say. I’m not sure if the vet would be willing to try drawing anything because she believes that it’s fat and “might be common to the breed” (even though I told her runners are bred to be lean little things). Her diagnosis of “fat bottom bird” was based on how uniform the mass looked in x-rays. Correct me if I’m wrong, but fluid would also look uniform in an X-ray, right?

She sure is precious, I sure do love my Runners. That is def not normal for Runners. If fluid didn’t come out fat may and can be looked like under a microscope. I am not sure if fluid would look like on Xrays. When my dog had what looked like a tumor come up a needle was put into it and fluid was drawn out looked at under a microscope and it was found out to be a fatty tumor.
You must log in or register to reply here.
Share:
Reddit Pinterest Tumblr WhatsApp Email Link