Breed on this 4 week old?

I have no idea what breed this chicken is-

I had a delivery of ten sexed pullets that arrived as day old chicks. 5 of them were not obvious to me upon arrival-4 EE and a silver penciled rock. One died at a few days old and I'm reasonably certain that was one of the EE. The problem is, of the 4 remaining I only have 1 with the telltale greenish legs. I *think* I know which one is the silver penciled rock at this point and I'm guessing another one is an EE.... this is the one that I'm baffled by. I have no idea.... anyone have an EE that looked like this as a chick?

Also, if anyone has any pics of a silver penciled rock chick about this age.... 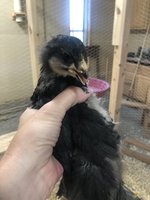 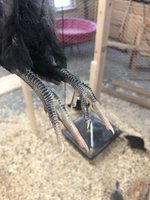 It looks like a rose comb? Not a rock if it is. Easter eggers are basically mixed breeds, so they don't all look alike. Unfortunately I'm seeing more without muffs lately. I think you will need to wait until it's mature.

Did you order an assortment? Or? It’s cute!

The original order was for a welsummer, splash maran, leghorn, australorp, austra white, 4 EE, silver penciled rock, and a buff orpington. 11 original, 1 died. I am certain about the welsummer, splash maran, leghorn, austra white, australorp and BO-it is the other 4 that I'm questioning. I need to look closer for signs of muffs and beards but it is not at all obvious from a distance. Only one has greenish legs. The rose comb on this one is throwing me off as well, otherwise I would have assumed it was a BCM or another australorp. These were from MPC. I've had them make substitutions (or mistakes) before on breed but on this specific hatch they called me when one of my breeds didn't hatch out (how I ended up with the Rock, original order was for an exchequer) so it is hard for me to imagine they would have called about one sub but neglected to mention another. I'm happy with the chick either way, I just have no clue who she is!

I guess I can't tell for sure if it has muffs from your pictures. I have gotten a few surprises from MPC too.

Are you sure that's a rose comb? They're generally pretty wide, as well as wedge-shaped. Though it could just be the angle, I'm seeing pea. There's so much variation within Easter Eggers.

That said, I have a bantam EE with a rose comb. It's certainly possible.

Is my silver penciled Plymouth a roo?
2

Would love confirmation on breed AND gender
2