My prob is 3 weeks old have about 6 flying now--out of brooder box---inside house---still not ready of course for outside. Have lattice on brooder but getting out of lattice..(they are growing very nicely)---13 now...And very energetic!!!...LOL...Not sure where to go from here...Oh yeah most are very social SPOILED) want me to be with them most of day--if i AM they let me know..... please help...I love them but what am I to do---husband is jealous...LOL

Mine could get out but haven't bothered. They like it on top of the feeder and waterer.
I tried taping cups on top of the containers but it just gave them a higher place to sit.
One flew to the edge of the box to say hello.

The brooder is a moving carton in the basement with lamps suspended by chains from the rafters.
Other than the illumination in the box the basement is fairly dark.
While they like to peer out of the box they have not as yet shown an interest in actually leaving the
light box and exploring a dark basement.

As a college student I had anoles in a tank in the basement. The tank was set up with plants and lights
and I misted them several times a day and left it uncovered. Occasionally a lizard would leave the tank
and climb up the wall but it always returned to the plants and the warmth. At the Bronx Zoo most of the birds
are shown without glass barriers, they could fly out into the darkened hallway where the people are but prefer
to stay where it's light, where the food is, and where it is familiar.

I can't predict what will go on in that bb sized brain and I've no experience with chickens so I'm not suggesting
anything or even pretending that I'm not taking some risk. I'm just at a kind of cabin fever stage;
Got To Get Them Out Of The House, and the energy to create additional measures in my basement just isn't there.
I'm keeping my fingers crossed and hoping to make it another week or so without incident.
Then they go where they really belong.................OUTSIDE!!!!!!!!

Jealous of time I spend with them--not of their interest in me...LOL....

Here is one of my brooder boxes that I put the chicks in until they are all fluffed out. It is a styrofoam cooler meat came in. 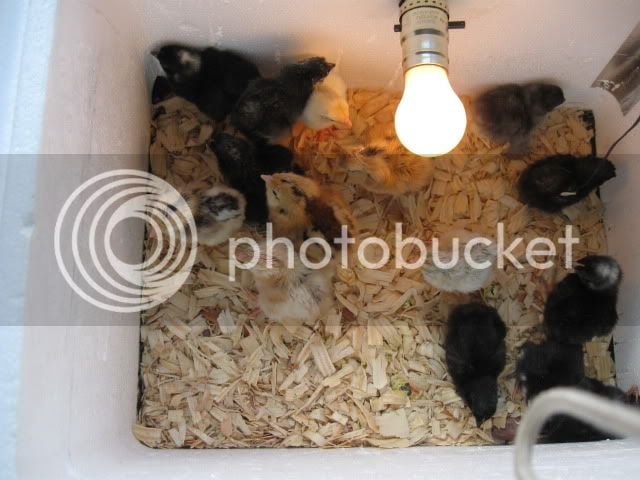 After they have been in the brooder box for around 24 hrs, they get moved to the brooder cabinet. 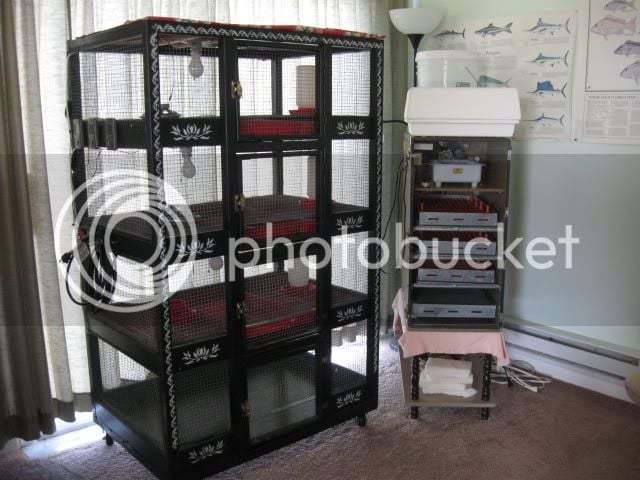 Here are some of the chicks from my last hatch. 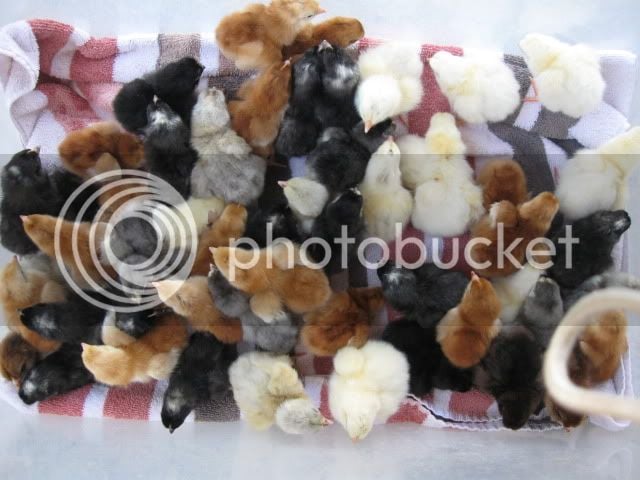 ours were about 2 feet tall but after 2 weeks a few of them could fly to the top so we had to put a cover on it...we made a brooder out of a watermelon box we got for free from our supermarket. 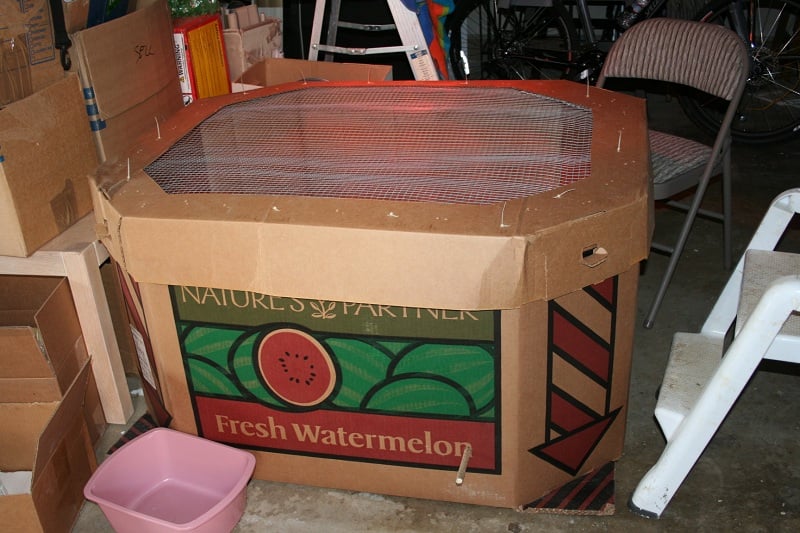 Quote:I noticed mine figured out how to use the top of the feeder as a launch pad in about a week or so. I cut some wide chicken wire to make a top for the cardboard sides of our pool brooder. Crimped the chicken wire down all around the edge of the cardboard and bound the edge of the wire with duct tape so we don't get stuck by the ends of the wire. Now I get the stink eye from whichever one happens to be on top of the feeder

I put a wire mesh over my brooder till I was ready for them to be out. I live in Southern Colorado where it was still getting to 20* at night, so I wasn't ready for them to wander too far from the heat source.

I came down to the basement and there was a Hamburg (would be a Hamburg) sitting next to the box in the shadows. She didn't move away as I came up and she didn't resist like she usually does when I scooped her up. I put her back in and she looked a bit relieved.

I thought I had it licked when I left Catwoman sitting on the edge and went upstairs and then peeked to see what would happen. She looked around for a minute and then turned around and went back into the box. Aha I thought, my theory is correct.

She (I think it was Rorschach) was out long enough to poop (an inch away from where she was standing) and was standing facing the box. She may have made several attempts to jump back and failed. Had she jumped from the top of the waterer to the edge, and then maybe didn't get a good grip and flapped down to the floor she would have landed where I found her.
I've blocked the area over the feeder and waterer with some cardboard so they can't make it in two easy jumps. The box is a whole 22" tall so a determined Hamburg could make it. Will she?

I'm betting I can keep this under control for another 10 days. Then they will be six weeks and outside. Nighttime temps now are in the 60's, sometimes hi fifties, if we are lucky. If not our lows will be upper sixties and lower seventies. In either event they can handle it.
I shredded some straw yesterday and raked it into the run. Then I packed the nest. Mixed some pine shavings with DE and added it to the nest. I am so ready to put them out. The Yokohamas are only feathered about half compared to the rest. Slower to mature I guess. And despite being about 5-6 times their original size they seem tiny next to the RIRs. If they all were the size of the RIR's and as feathered they would be O-U-T.

Reading some of the posts about Hamburgs today it seems that they are a tiny breed and some are even confused with bantams. Tiny as mine seem to be they are the most feathered so far.

I lost. The cardboard that was supposed to stop them from
jumping off of the feeder became the new desired target.
It couldn't hold the weight and buckled and I found it
at the bottom of the box.
Though the three boys are now men I was able to find
a few of those old toddler barriers in the basement and
now the girls are topped off and secure. Ten days to go.
You must log in or register to reply here.
Share:
Reddit Pinterest Tumblr WhatsApp Email Link