Bruce, known to BYC members as bruceha2000, has been a member of our community since April, 2012. Another of our wonderful all rounders, he is known for his friendliness and good advice.

I grew up in Southern California and moved to Vermont when I graduated college in 1979. So. Cal. was too hot, too dry, too paved over and TOO populated. The over population is far worse now, not sorry I left. I have been married for 27 years and have 2 daughters soon to be 23 and 25. Both girls are still at home, the 22 year old graduated from Beloit college last May. Older daughter has started taking some courses at the Community College.

I am a retired Software Engineer. The commute to "work" is much nicer when everything I need to do is at home

I like to work with wood and made all the door and window trim at my prior house from rough Cherry and Red Birch. You can have a "nicer" result if you can do custom work yourself rather than pay someone a lot of money to do "off the shelf" work with cheaper materials. I like not only the creation of a finished item but the design of it as well. I also enjoy vegetable gardening though with the clay soil at this property and rocks EVERYWHERE you want to dig, the garden is less productive than it could be. The food garden is a work in progress, amending each year.

"How" did the possibility of owning chickens happen? My older daughter has had a 24 hour migraine since she was 14. She gets episodic headaches on top of the permanent migraine. She missed more days at school during her HS Junior year than she made and had to do her senior year at home with Pass/Fail grades (all pass, she thinks 100% is ALMOST good enough). Some of her episodic triggers are noise and man made fragrances, she has been on Candesartan for about a year which has helped with the episodic events. Our prior house was in a tight neighborhood (the lot was 44'x100') and we couldn't open the windows in case someone was running their dryer with "make it smell nice" sheets. The street was parallel to a main road 1/4 mile away and sirens weren't helpful either. My wife decided we needed to find somewhere less busy and further from other residences. At the end of 2011 we bought a "used to be a farm" of ~26 acres, 19 of them woods, 2 old barns in not great shape and a rehabbed house that was originally built before the U.S. Civil War. There isn't enough "time" here to discuss the rehab that had been done by the prior owner, what structural problems were covered over. Of course we found this out after buying the place.

"Why" chickens: I figured since we live on what had been agricultural land I should be doing something sort of agricultural and useful with it. But my older daughter is an emotional vegetarian which severely limits things. She won't eat anything that contains the slightest bit of something an animal had to die to provide. She would not be able to deal with anyone here or elsewhere eating an animal that was raised here. Thus we have chickens for eggs and unless they have medical issues that make it inhumane to let them live, they are here for their natural lives whether they are productive or not. 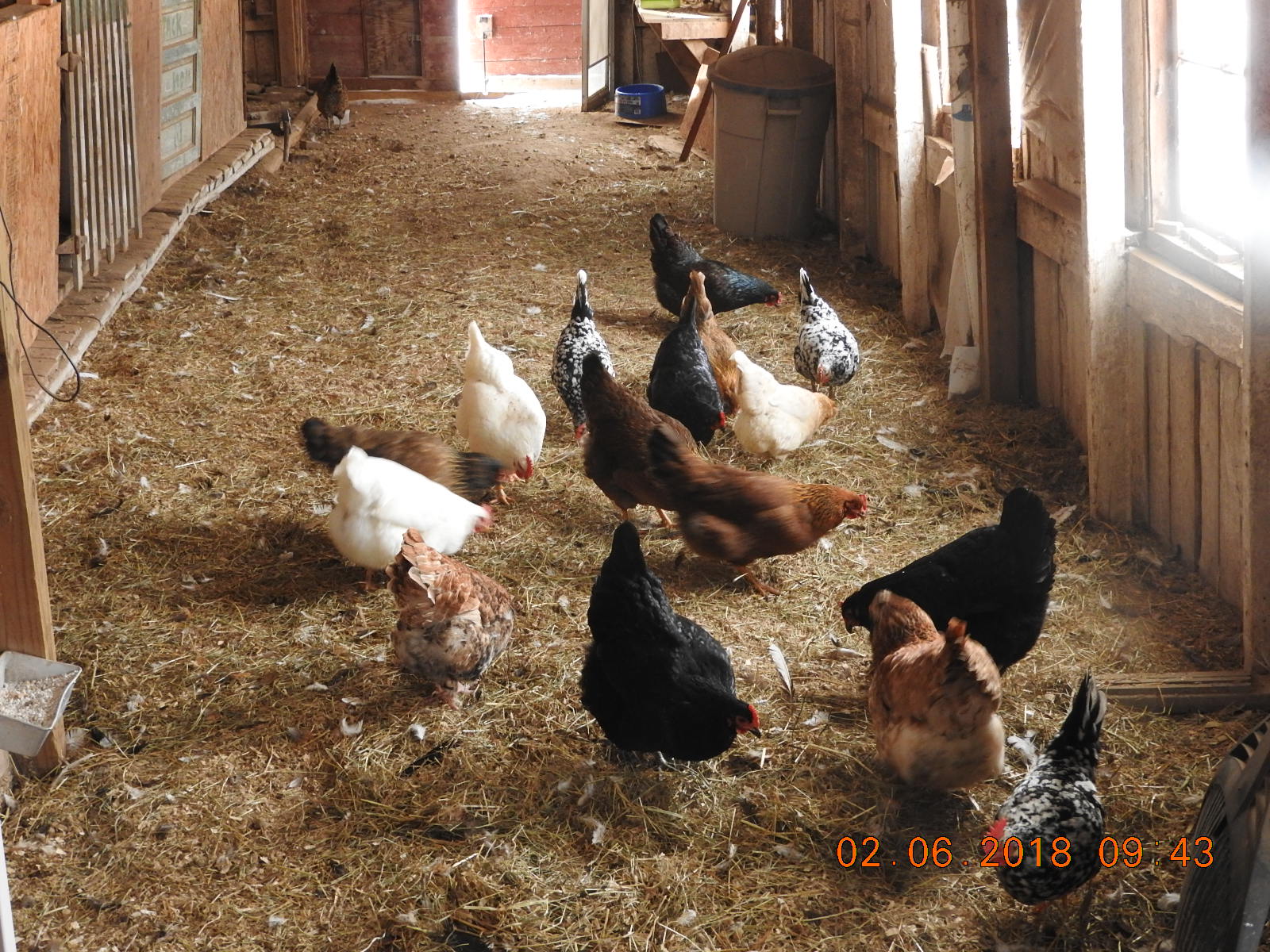 3. Which aspect(s) of chicken keeping do you enjoy the most?

Eggs are good, when the girls are laying

. I like that each chicken has her own personality. I wouldn't have guessed that prior to having them. My older daughter names them all and they are leg banded. The banding is mostly for my wife who works 6 days a week at the post office and somewhat for my older daughter. My younger daughter couldn't care less about the chickens. I know who is who by look and sound but I see them at least twice a day. They have their 3 favored hangouts when there is little or no snow, 2 of which are near the house. Watching them forage around the yard is very pleasant and calming. The girls can come and go from the barn as they like during the day though they spend their nights in a coop that had been a horse stall. They have an auto door controlled by a light sensor that lets them out into the barn alley every morning. 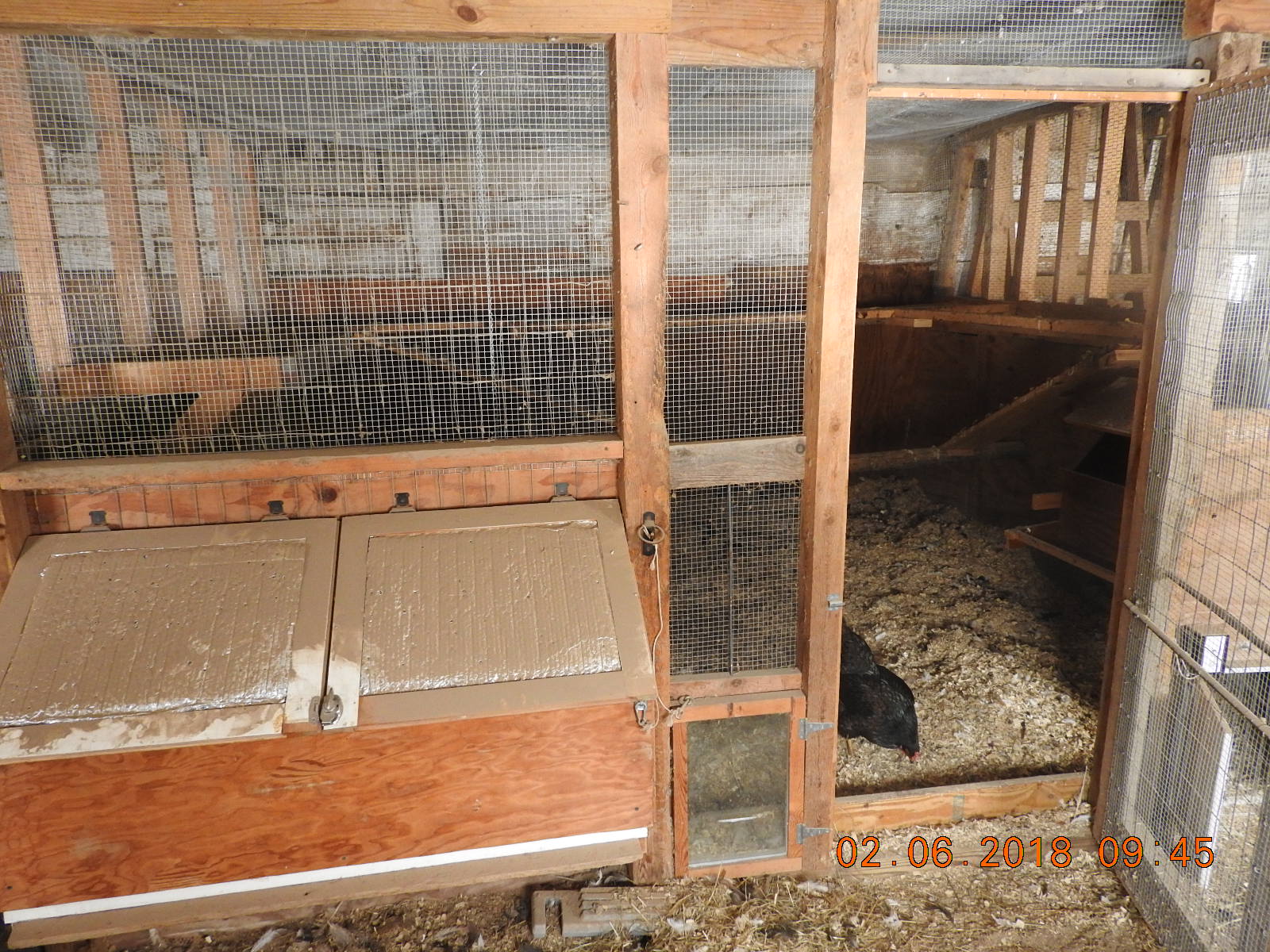 Echo, 2012 Black Australorp, no question. She was the most amusing girl, first to see if I had treats. She was my best layer and hardly ever sounded like a chicken but vocalized quite a bit. Squeals, bugles, whistles, the occasional 2 note crow. She was very "helpful" anytime I was digging, eating "things" with such speed I rarely knew what she got. I did manage to see her half miss a worm once, but it didn't get back underground before the second strike. She didn't mind a little rain. 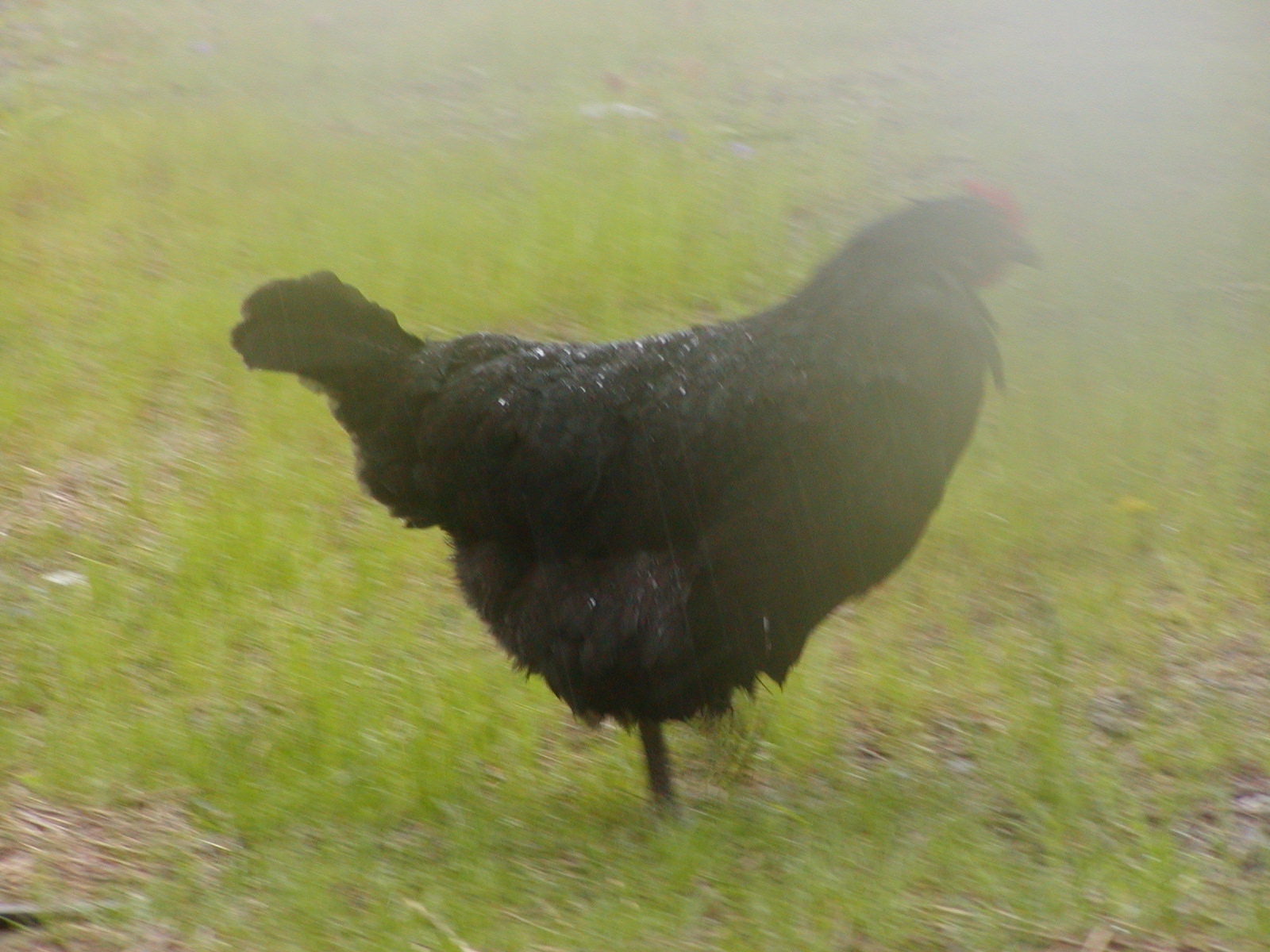 She survived a fox attack in April 2015, screaming loudly as I was making dinner. We were able to scare the fox off toward the woods, Echo took off the other way. We found her 2 hours later at a neighbors 100 yards away and across the road. We now know WHY the chicken crossed the road

She lost feathers around her neck but was otherwise fine. Sadly she had a non recoverable prolapse last summer and I had to end her life. She would have suffered for a couple of days and died, no way I could do that to her.

Of the present flock, 4 of the 2017s - the Welsummers (Betty and Veronica), the EE (Cassiopeia) and one of the Leghorns (Mint) hang out together, I call them the 4 musketeers. They are all pretty friendly and often exit the barn through the alpacas' always open door in the north end of the barn before I go down to open the south door to let all the chickens out (if they want to). It isn't unusual for me to be greeted at the upper gate by one or more of the 2017s when there is no snow on the ground. Or, for that matter, up by the house on the WRONG side of the 5' tall gate and fence. For whatever reason, none of the older girls ever go out the alpacas' door, they wait for me to open the south door.

5. What was the funniest (chicken related) thing(s) that happened to you in your years as chicken owner?

When the 2015's were small I let the grass in front of the barn grow so they had some cover. Chicks at 9 weeks, a week after Zorra quit her "mama job". 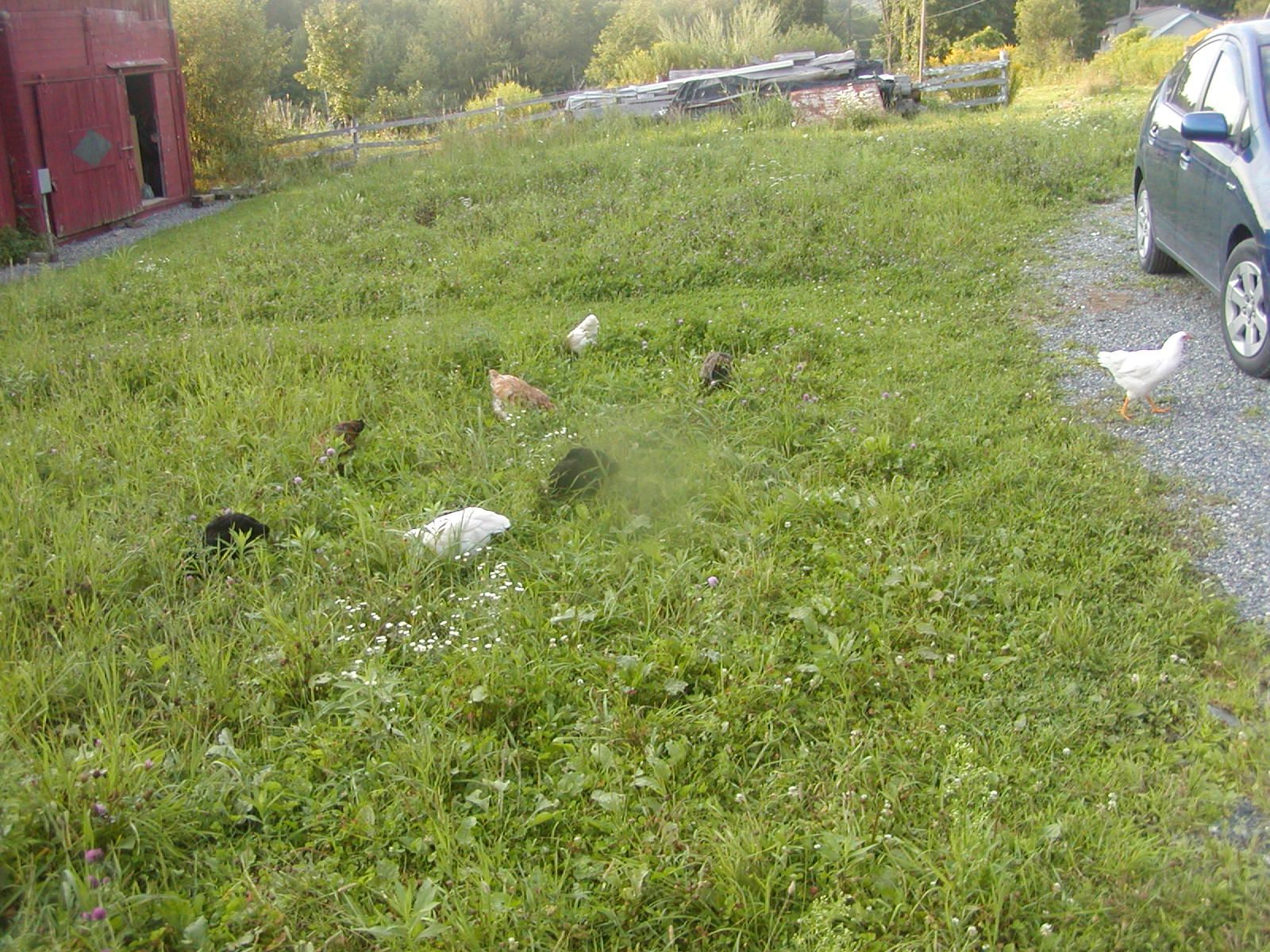 We had 15 chickens at the time and the littles were a bit hard to spot in the grass. My wife was counting all the girls. She got to 15 and was happy with that until a hen walked up between the barns. That makes 16, she had counted a wild rabbit. This is not that actual event, but you can see the rabbit and chickens aren't concerned about each other. 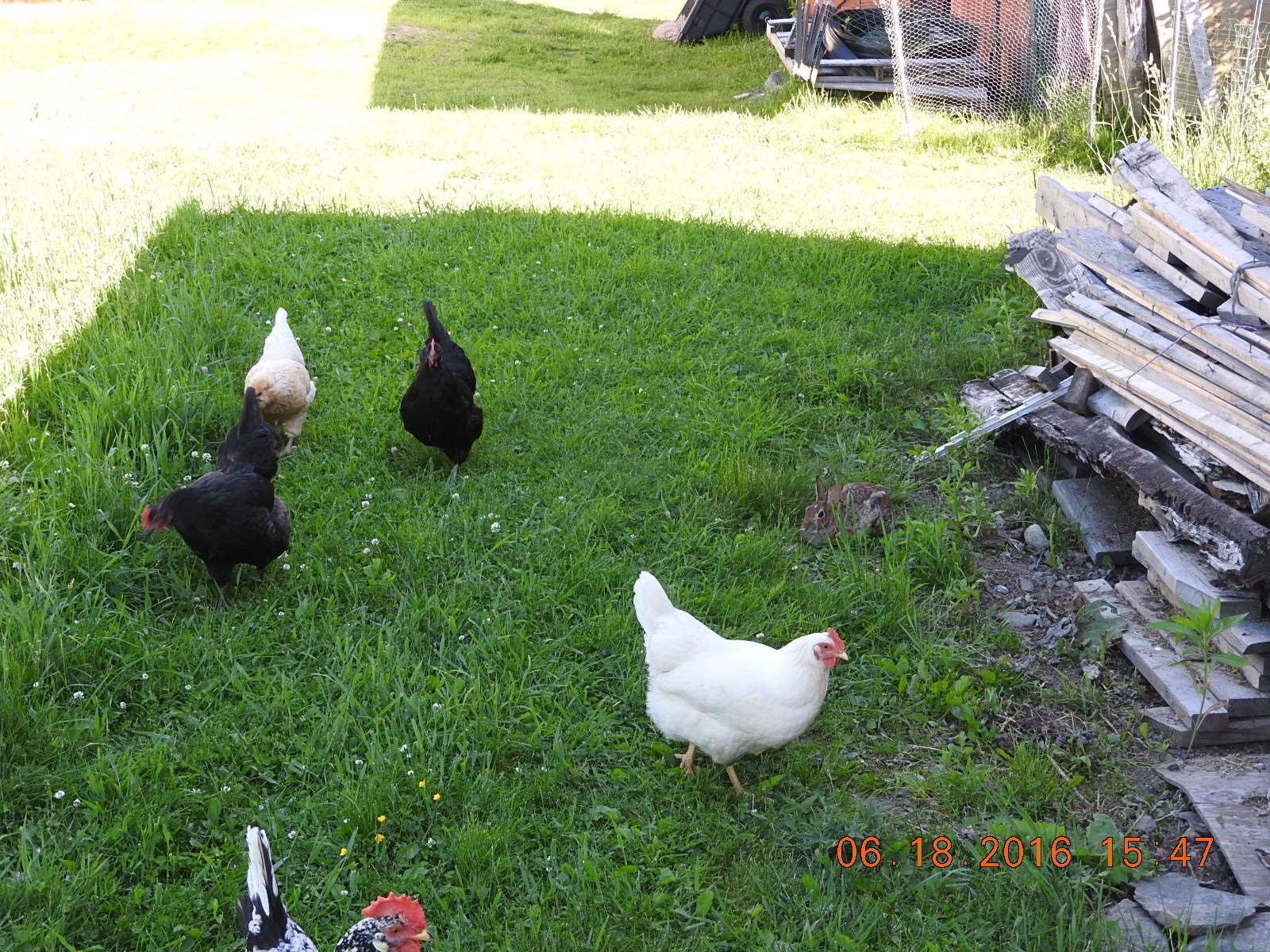 6. Beside chickens, what other pets do you keep?

True pets - 4 indoor cats. Samantha is the oldest at 16 and has diabetes. She and Rascal, 11, came from the Humane Society and are my wife's cats. Older daughter has Checkers, the 6 Y/O that was dumped at our old house at about 6 weeks of age. Younger daughter has Christofur. He is somewhat over a year and was dumped at our current house 1 year ago at about 3 months. I heard him crying in the barn but didn't figure we needed yet another house cat though a barn cat could be useful. My younger daughter came home from college for a week at the beginning of March. She loves cats, wanted a cat and this one liked her; 4 indoor cats it is. Checkers on top, Rascal in the "house", Samantha on the far chair, Christofur on the near chair. 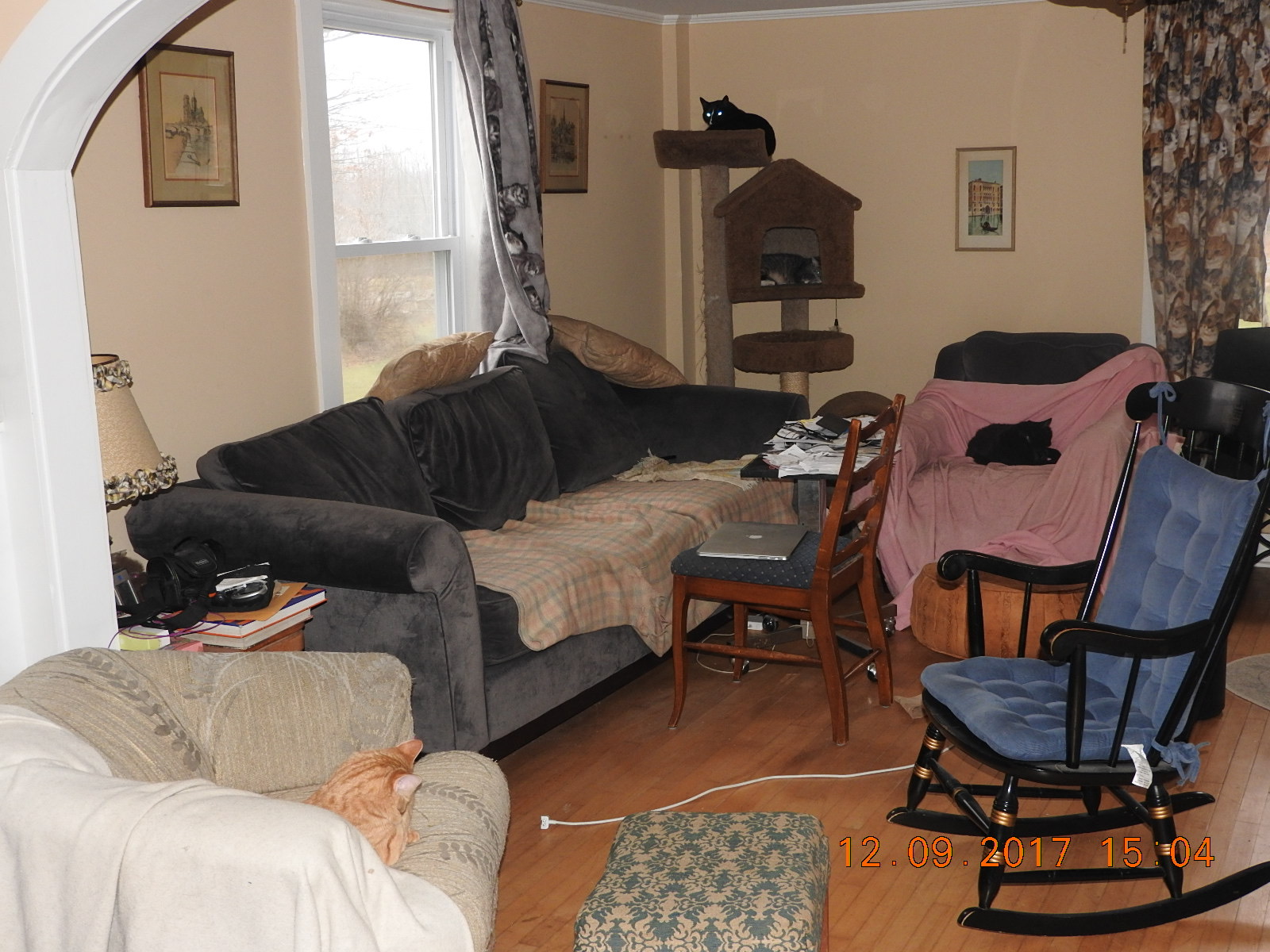 Not really pets - 2 gelded alpacas Teddy (black) and Laddie (brown and white). They were given to us October '16 by neighbors that were planning to (and did) move to Florida in the spring. Teddy really is black, he's a bit frosted and sunlit in this picture. Presumably we will eventually do something with their fiber. 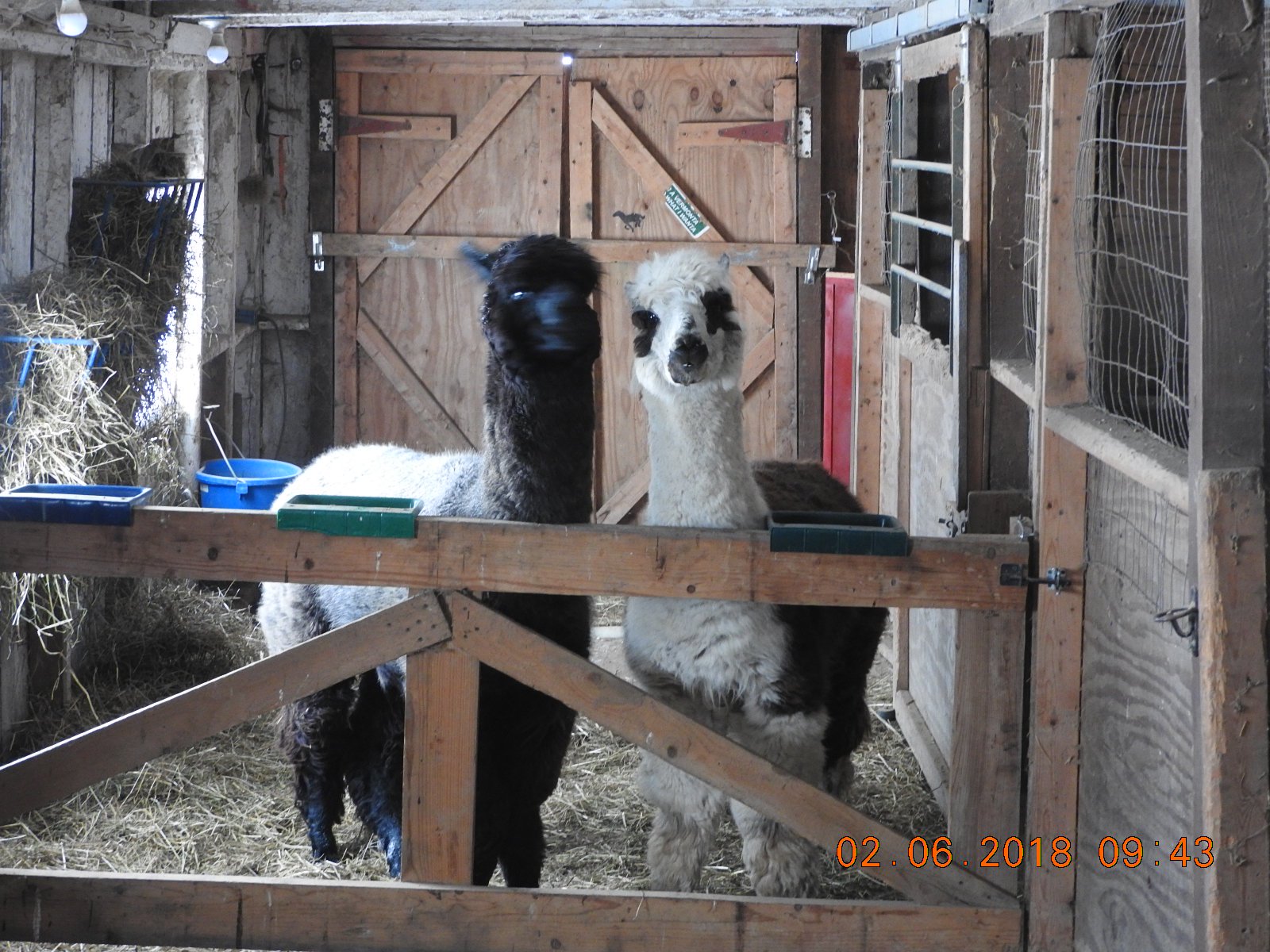 Some tropical fish in a 29 gallon aquarium. We also joke that the ladybugs we find in the house are my older daughter's pets. She puts something sweet on a plate and puts the ladybugs on it. Sometimes they stay around a few days.

I started reading BYC 6 months before I got chicks and joined 3 months before so I could ask questions. I've gotten a ton of good information from people on BYC both in chicken related threads and the "Random Ramblings" threads. I've "met" many nice people. I can't list them all but I would like to single out my friend "Blooie" for her intelligence, humor, engaging writing style and for championing the Mama Heating Pad method of brooding chicks, ducklings, poults.

See here for more about the interview feature and a complete list of member interviews:
https://www.backyardchickens.com/t/905602/introducing-vip-member-interviews/0_30

Hi Bruce! So glad to see you did an interview, great to see all your animals.

Thanks for sharing your story and thanks for always being around

Bruce....ah, Bruce, my friend! What a great interview! Too bad the written word doesn’t capture the smile that can be heard in your voice despite the miles!

Guess we kinda belong to a mutual admiration society!

Teddy and Laddie are gorgeous! You have a beautiful flock too (love the photo with the rabbit).

It's always a pleasure chatting with you. Thanks for sharing all your wisdom and good humour.