Can you feed chickens egg shell

Yes you can. I crush the shells up and add them to their food. Let the chickens benefit from that extra calcium!

Egg shells are my Isa's favorite food. I give her a big bowl of crushed shells every other day. Makes her eggs very strong and tastier too if you ask me.

You can offer it to them. Whether they eat it or not is up to them.

Egg shells are mostly calcium and can serve as a calcium supplement to chickens that are laying eggs. Chickens can get calcium from a lot of different sources, chicken feed, certain green plants, some of the creepy crawlies they eat if they can catch them, or even the rock they eat as grit if it is limestone. If the egg shells are hard they are getting enough calcium from some where.

All chickens need a certain amount of calcium for body function but ones that are laying eggs need a lot more. A fair amount of the calcium they eat never gets absorbed by their digestive system and passes straight through and comes out the back end. It can sound a bit complicated but a hen that needs extra calcium for her egg shells seems to know it and will eat a calcium supplement like oyster shells or egg shells if offered. Those that don't need the extra amount shouldn't eat enough to harm themselves. I'm all in favor of offering a calcium supplement on the side and let them decide if they need it or not.

As with a lot of different things on here we can have some pretty different opinions on how to prepare the egg shells for them or how to offer them. Some of us just toss the half shells after they have been cracked into the run or compost pile and let them have at it if they want them. Some people believe you need to wash them or bake them before you offer them so they don't taste like eggs. Some people believe you need to crush them to tiny bits so they don't look like eggs. Some people mix them with the food instead of letting the chickens decide whether they want them or not.

As far as I am concerned do it as you wish. Mine go on the compost and usually are not eaten. The egg shells are hard enough so they don't need the extra calcium that badly. In my opinion there is nothing wrong with offering them the egg shells an may in some cases be beneficial.

I let them dry a day or two. 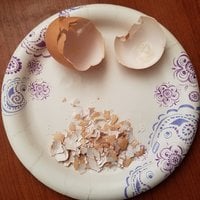 . Then crush with my hands. I don't wash, bake or microwave. 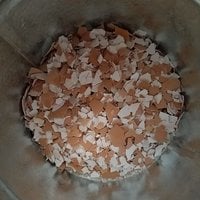 Some people say, only feed shells from your own chickens, not store bought. Fear of disease? I do the same. GC

When I have far too many eggs and no one is buying them I boil them mash them up mix with crushed eggshells and then leave it to cool down when it is cold I give it to my chicks or chickens BTW it is very good for baby chicks!!!

@HuffleClaw
What do you think?

SongBaby33 said:
@HuffleClaw
What do you think?
Click to expand...

Why of course you can feed your chickens their own egg-shells! I do it often, never had an issue with it. It's a great source of calcium for your girls, too.

Yep I thought so thanks

Wondering if I should change chicken feeds