This little chick seemed to get picked on by ONE particular hen way more than any of the others, generally it was never BAD. A bit of chasing, but when the little one got to the others, the chase was up and she ignored them all. But this..... this was horrifying to come into in the morning yesterday. (pretty sure it was this particular bird because she had blood on her, that AM while nobody else did, but since i was not there i cannot be 100%) I felt absolutely terrible thinking that integration was going smoothly ( All the other chicks REALLY are fine, and are even accepted to eat out of the food dish of the big girls, when i have them loose. The chicks DO have their OWN waterer and feeder as well, and are usually sectioned off at feeding, but i was taking it away occasionally, and left it out for a few nights with NO problems at all like this, or even much pecking that isnt just a correction)

I feel awful that i let this happen.


So far the chick is eating and drinking really well, constantly ( like a normal chick) and the wound is not seeping NEARLY as much as it was yesterday. I expect some seepage for healing/draining ( I thought this chick would surely die that night..... ) Ive been moistening it with warm water, cleaning up as much as i can and i trimmed any feathers that would get caught in the seepage and stick in the wound as i could and putting Polysporin on it ( No pain reliever! lethal stuff!) and coating it in the stuff every few hours or so to keep it fresh, and to keep bacteria at bay. ( Do you think that i should only do this twice a day? to allow it to dry and get air at it as well?) The wound is NOT covered in gauze, but i can if it is highly recommended. I figured that it would probably heal faster without gauze ripping it open every time to be changed and checked. The bird is inside in a brooder type box ( smaller to prevent her from flapping around too much, aggrivating the wound, or just doing TOO much) And im keeping it extremely clean and changing the paper shes on every time i go check and there is mess in there. Fresh CLEAN water available every time i check, and food ( as much as little bird wants!)

Have and of you experienced this type and extreme *to me* type of injury in your birds before? how did YOU handle it? Im choosing to go with treating it on my own at the time being, the bird seems to really honestly be doing well, in spite of things. 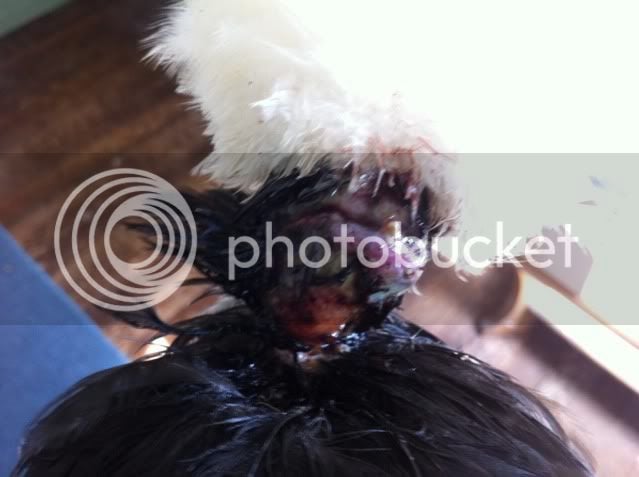 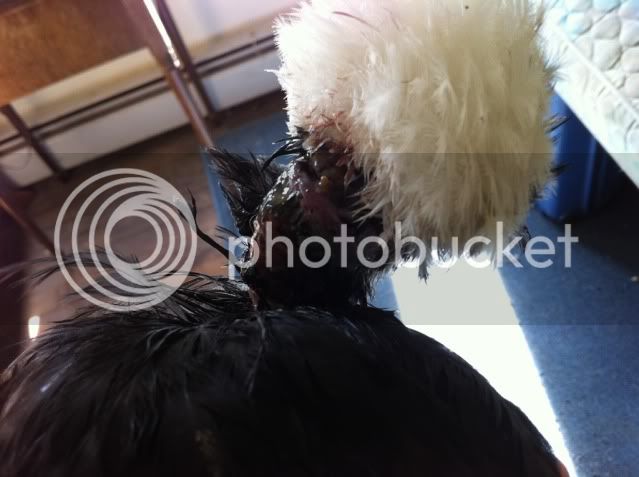 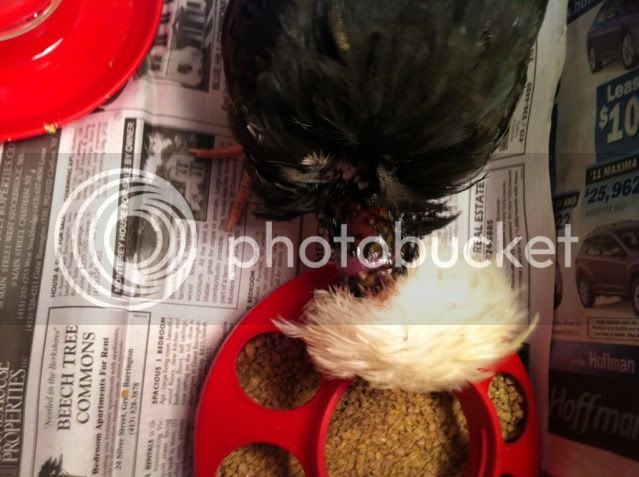 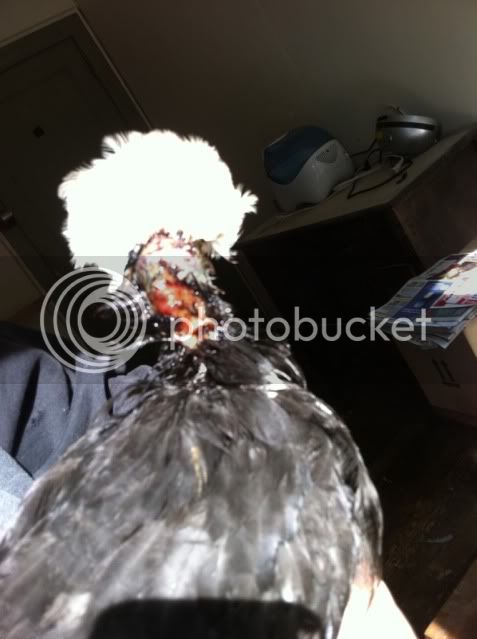 ( The light, in this pic, makes it look more RED than it really is, the lower lighting shows color more accurately)

Quote:
Is this a polish? and do all your other chicks look like it? the reason I'm asking is they seem to be drawn to chickens that have top knots for some reason and that maybe why this one is gettin pecked. what you have done is great, I had a frizzle bantam that got scalped by a roo and looked awful too, after a few days of neo- I sprayed blue kote on her and she healed fine. so I'm sure your little one will too, but you might have to take the perpertrator out for a week when you put this one back that way you have knocked this hen down a few pegs on the pecking order.

Thank you so much for encouraging words! Shes very energetic today, nearly normal acting, if just a bit less flighty. Still eating and drinking well, taking polysporin well albeit with a bit of a struggle

(thats a good sign!) The other birds (polish) are all fine, just this girl was being specifically targeted by that hen. A silkie ( mixed i believe from TSC) but they live with pure silkies too and nobody elses gets PICKED on like this one.

Im either going to try attitude adjustment with that hen ( mean one, though she leaves others alone) when this one heals ( THIS intro will be slower still because im NOT putting her back till shes healed!) or i will cull, no reason to have a mean bird when everyone else is really OK.

Ill keep this post updated with info, and pictures and how im going about treating this girl.

So far littlechick is still feisty and eating and drinking. Though she might fidget while i put ointment on, shes not HATING every minute of it, and i dont need to restrain her to do it. Just let her perch on a hand.

Still applying polysporin to the wound, and nothing seems to be turning sour, or smelling badly. Im still keeping everything very very clean, and she is still alone for now. I am wondering, once i put her in a bigger box after the weekend, if i should put another chick in there with her, to keep her company? Though i dont want any pecking, and she does not seem the worse for wear being alone.

Im happy that her energy is up, that, to me, is a very good sign and i should stop fretting every hour as to whether she is going to pull through this A OK. I think she will. Pictures tomorrow of the wound progress. Not much change, less weepyness. Bloody areas i could not clean up/get off are drying.

Still doing good, and looking SO much better. Really must get pictures up!

Do you have a wire pen of some kind so that she can be with the others without fear of the scabbed/healing area getting pecked? The longer she's away, then most likely the harder the reintegration will be. I would def. pen the bully separately when you attempt full reintegration. Glad to hear that poor little bird is doing well and healing.

I may start putting her out, in the pen/coop in the day, with JUST the other little birds ( while the big ones are out in the run) so shes socializing, under supervision, of course. Shes truly healing so well. Skin is very normal colored again, just scabby and bare. Im not worried anymore about her like i was!

If integration takes longer, and i have to have one house chicken for longer until things are healed 100%, im ok with that. I may end up bringing in two other birds so she has friends to be with if things end up taking longer. I want her in the house for a bit more until im sure things are 110% healing wise, and its safe to continue with the next steps. I think it was more of a size issue than anything, the other birds are laying age, and these guys are still chicks ( still making "Chick" sounds, though having adult feathers) but close enough that overall, integration has gone fine other than this incident.

its hard to pinpoint a specific cause, the bird, is otherwise healthy and active and acts just like the other chicks. No weird fear of the other adults, or funny reasons for it to be specifically targeted. Ill be careful and slow with this one, and remove the other bird if i need to to knock her down a few pegs.

Graphic Photo - gaping neck wound, what can I do?
2

2 Day Old Chick Pecked. What do I do?