chick with characteristics of both my roosters

Hello, In May of his year I hatched an egg from my red naked neck 1/2 bantam Cochin hen. Her eggs are easily identified as she is the only hen that lays almost white small size eggs. I have had three roosters since mid January. My Naked neck red rooster is the father of the chick in question and was not directly in contact with the mother of this chick. The other two roosters were a white headed black Polish rooster and an Ayam Cemani. Both of these roosters had just started breeding and had no relationship to any other birds on my property. Both the Polish and Cemani roosters where allowed to free range and were housed with the mother of the chick above. When this chick hatched it was completely black with black legs and skin and 4 toes. Immediately I assumed it was the Cemani's chick as it had no sign of any crest After a month or so passed the chick started to sprout a small top hat crest of feathers which started me scratching my head. I know it isn't the product of two rooster's genetics but it is so strange that the two characteristics it picked up from its dad happen to match the two roosters. The hen passed forward her genetics of the feathered feet and the naked neck. The chick still has the dark solid colored eyes of the Cemani. The eyes of the other non Cemani chicks have all changed from dark to have the colored normal chicken iris, so I believe her eyes will stay solid dark colored. If the Cemani is the dad where did the crest come from and if Polish is the dad where did the Cemani traits come from. At the time this egg was put into the incubator I did not have any dark skinned fibro birds other than the Cemani and the Polish rooster was the only crested bird. I may have this wrong, but when I wanted to add a Polish to my naked neck hens I did a little research. It was my understanding the NN Polish cross chicks would have much smaller crests then a full Polish. In the next generation the half Polish small crested chicks would produce non crested offspring unless bred to a crested bird. I understood it was not something that can skip a generation and present on chicks without a crested parent. Is this correct? I have seen the dark skin show up from non fibro birds in other flocks but they were more mulberry or gypsy faced. It has never cropped up and presented so vividly in the birds I have seen and they usually had eyes with a colored iris not solid dark eyes. I am by no means a master of poultry color genetics but this one seems to defy what I thought was possible. I should also mention that I am the only chicken keeper within a mile, so a neighbors rooster being the surprise dad isn't the case. The mother of this chick was hatched here so no semen was hijacked by the hen and brought in from another source. The only other feather footed chicken I have is a dark Brahma. In the highly unlikely case that I was wrong about the mother and confused the small white egg for the Brahmas large brown egg it only brings up more questions as then I don't know where the chicks naked neck came from. I'm sure it isn't as complicated as I am making it but I sure could use some help trying to figure this one out. thank you for taking the time to read the history of how this chick came to be. I will attach a photo of the mother after the two photos of my mystery chick.

That is a very interesting combination! Congratulations on hatching such a unique-looking chick!
Unfortunately I do not understand chicken genetics, and therefore cannot help answer your questions.

orloffer said:
That is a very interesting combination! Congratulations on hatching such a unique-looking chick!
Unfortunately I do not understand chicken genetics, and therefore cannot help answer your questions.
Click to expand...

thank you, she has a unique look that is for sure. i see you are an Orloff fan. I was given a pet Orloff teenager a while back that was supposed to be a pullet. the grand kids dressed her up, she even wore a pair of pink doggy sandals and then our little Loretta let out the most pathetic crow. My other roosters weren't happy to have him so we didnt keep him. My friend gave him a great home with his own ladies to watch over and he still comes running when you call out "Loretta", lol. Aside from my Naked neck Roosters he was the sweetest bird ever.

Nice Orloff! The shoes are so funny! I just have one Orloff hen. They are such unique-looking chickens.

This is happening to me rn! I have a splash chick with fibro traits and the splash rooster doesn’t have any fibro lineage and the barred half AC couldn’t carry the splash genes! I’m so confused 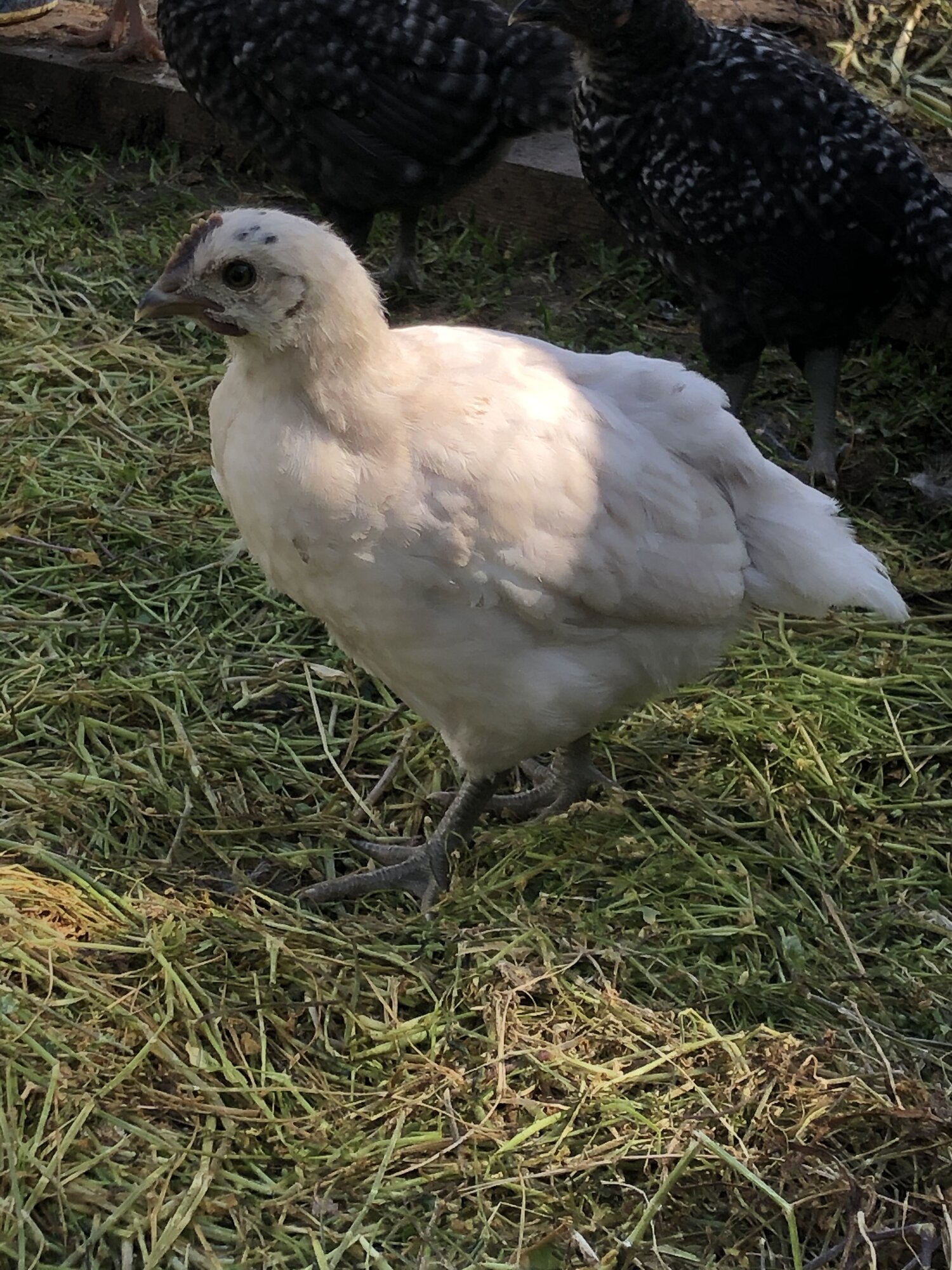 pretty sure the mom is RIR, none of the hens have fibromelanistic traits

what a cutie. if mom is a RIR then how would you produce a splash chick. I get my chicken genetics screwed up so please correct me if I am missing something. it seems as if fibro birds can just pop up out of know where and disappear just as fast. the chick i posted had a chick from a non fibro rooster recently and her chick has no hint of fibro, she is as pink as pink can be. it is fun to get something unexpected pop up in our chicks but it sure can leave you scratching your head

I've heard of this happening with snakes, when bred to two different males. Occasionally the offspring will have both traits from both daddies. Not sure how common it is with chickens though.

i never heard of this happening before in any species I need to investigate further. would love to know if there is a way to test the offspring. thanks for the info. be great to know i was not crazy

Maybe they can help. Can a chicken have two fathers?