So, I am posting this story for two reasons. First reason is I am trying to cope with a friend's passing by posting a funny story. Second reason is I have been meaning to post this for a while.

So, when I got my golden sex links in March 2017, they were a few weeks old, then I moved my rabbit, a Netherland Dwarf/Californian named Sophie into their run. She and the chickens got along right away.

Their relationship is quite interesting. They eat and drink from the same source, eat the same feed, drink the same water, and more.

But this is not all. Once, we went outside to check on them, when the chickens were acting scared. I looked at them, they were okay. I then found a dead feral cat in the yard near the run. The wounds it suffered were too small to be our dogs, a Saint Bernard and a besengi. The chickens were scared, then we figured it out.

The rabbit killed the feral cat. It was the only explanation.

Then, a year later, I heard the chickens freaking out. I went out, and a LARGE hawk was perched on the runs fence. The rabbit was out, and a chicken was missing some feathers. The hawk then flew off empty handed.

Once again, Sophie scared off something that went after the chickens.

She is a TOUGH rabbit. I saw her go after a baby rabbit that went in the run once. She is very territorial and is not afraid to defend her territory or herself. She does NOT, however, go after the chickens. They are friends. They never fight.

As sweet as Sophie is, she defends the chickens. She is also smart enough to shake the feeder to make more feed come out for herself and the chickens.

I call her "Sophie, The Mighty Bunny, The defender of Chickens."

I'll get a picture of her later on today.

a windy hill in southwestern Indiana...

That warms my heart! So sorry for your loss, I'm glad you have Sophie and her charges to help you through. Can't wait to see photos!

Sophie sounds like a rooster in a rabbit body!

Love to see a picture of her if you'd share one Jared. 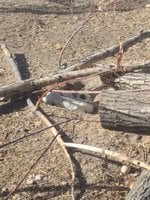