We live on a property that is mostly wooded and in the past have ran across a black snake or a water snake every so often. Since I've had chickens over the past two months, I've dispatched of one very large rat snake and have seen three more that got away before I could get to them. My guess is that these things are catching the chickens' scent. I know rat snakes go after chicken eggs, but do they go after the chickens as well?

See if you have mice and rats

In a word - no.
Unless you live in southern Florida where crazy people have released Burmese Pythons.
Snakes harm thing only to eat them. A snake can't eat a full grown chicken, unless a python, anaconda or similar sized snake.
They may eat baby chicks but most snakes are likely to be in greater danger from the chickens than vice versa.
Personally, I would never dispatch a non-venomous snake, least of all for the chickens' benefit. Snakes are the best mousers you can have.
I have had big black snakes get into a couple coops to eat eggs but that is my fault for not collecting frequently enough.

I do a lot of hen-hatching and hen-rearing so larger Black Rat Snakes are a problem as one can take an entire clutch of eggs or hatchlings in a single night. If larger than 4 feet, then they get relocated. The larger Bullsnake is someone that has caused issues with broodies nesting / roosting in field, but does not appear to come into barn or do a lot of climbing when compared to the Black Rat Snake. The big Bullsnakes can take 5 week old chicks.

My chickens, especially the games, will attack snakes during the day but the snakes of greatest concern are hunting after dark. I have likely lost a couple juvenile chickens to Osage Copperheads over the year, but those losses are not something that causes much concern.

Last year I experienced heavy losses from the resident snakes. I didn't get any chicken eggs for months over the summer. And until fall would regularly lose birds up to 3.5 months old from asphyxiation. The snakes couldn't actually swallow them, but the'd kill them, swallow them to the breast bone, and then spit them back up to go try another one.

I've never had a problem with snakes in the chicken yard, but I have watched the chickens dispatch one on a few occasions.
As long as the snakes follow the rules, they are welcome here.

ColtHandorf said:
Last year I experienced heavy losses from the resident snakes. I didn't get any chicken eggs for months over the summer. And until fall would regularly lose birds up to 3.5 months old from asphyxiation. The snakes couldn't actually swallow them, but the'd kill them, swallow them to the breast bone, and then spit them back up to go try another one.
Click to expand...

Wow!
What kind of snakes?
Are your chickens bantams?

What kinda feeder are you using?

ChickenCanoe said:
Wow!
What kind of snakes?
Are your chickens bantams?
Click to expand...

Nope, surprisingly enough all the birds I lost last year were English Silver-laced Orpingtons. I moved the first three snakes several miles away that I found in the pen or coop last Spring hoping that would be seen as some sort of benevolent deed and the snake gods would smile upon me, but no. I stopped counting after I permanently relocated 18 last year (two in one night; one in the coop and one eating baby barn swallows on the front porch). It was about three months of no eggs at all with the three hens that were laying unless they chose to lay in the middle of the breeding pen. When I introduced the 3-3.5 month old Orpingtons I was locking everyone in the coop at night. Apparently they were several rat snakes living in the pine bedding. They were coming out at night and taking the youngsters off the roost, strangling them, trying to swallow them, and then regurgitating what they'd managed to get down, and would try again. Once I discovered that I gutted the coop. I drug all the bedding out, nestboxes, etc. I ended up with one pullet out of eight surviving. To be safe I stopped locking them up at all so if a snake managed to get into the coop the younger birds could escape out into the pen. I also lost all of the American Buff geese eggs to them lastbyearost of the snakes last year were all over five feet in length. Most of them have been fairly aggressive for rat snakes also which I find very odd.

This year I've only seen three rat snakes in the barn, which is almost impossible to secure from them. I've seen two garter snakes which I'm not worried about at all. I must have stepped on the second one in my mud boots because he was a very angry, little snake. He struck at me and then chased my roommate across the yard, who of course is deathly afraid of snakes after an encounter she had with them as a child. She does raise bantams, and all of her birds are behind hardware cloth. I've found a design for breeding pens I really like so I'm planning on helping her build those for her birds so I never have to worry about her going out and finding a snake eating eggs or one of her birds. If I really like the design, I'll build them for the Orpingtons as well and just leave the turkeys, guineas, and geese in the barn.

I suppose I should count myself lucky though. Another friend breeds exotic parrots and she's found multiple rat snakes in her barn, one of which ate an fairly expensive bird in a nest box last week. She's not super snake savvy so she'll send me pictures of them to ID and she's also killed two water moccasins in the same day in the bird barn, stomped a copperhead to death in a pair of flip flops no less, and in the very early, wee hours of the morning last fall found what she thought was a small rat snake curled on top of a feed bucket and grabbed it behind the head and placed it in a Tupperware for me to ID. It was a juvenile water moccasin. 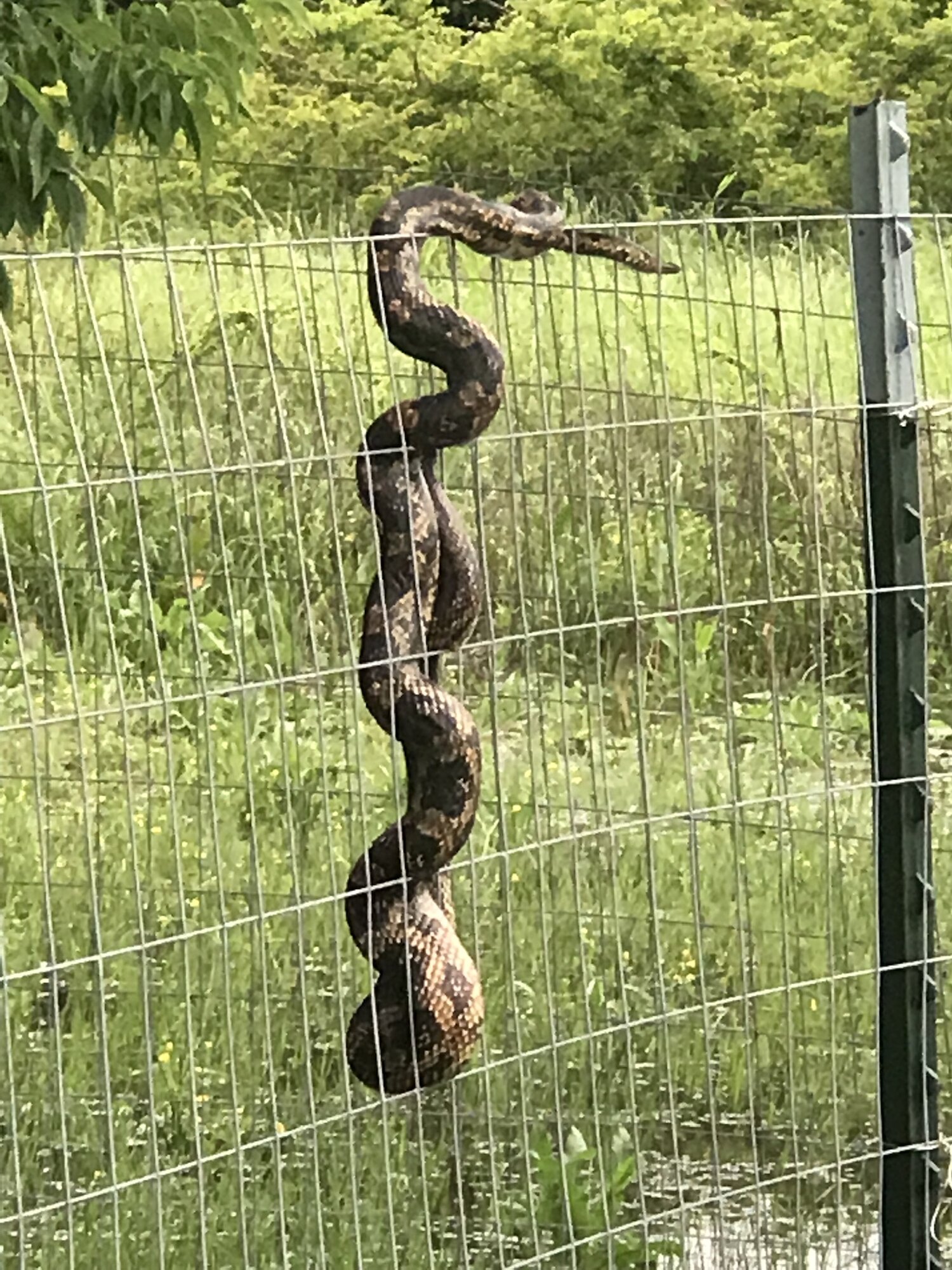 Turkey hens fascinated/horrified by one of the dead snakes this year: 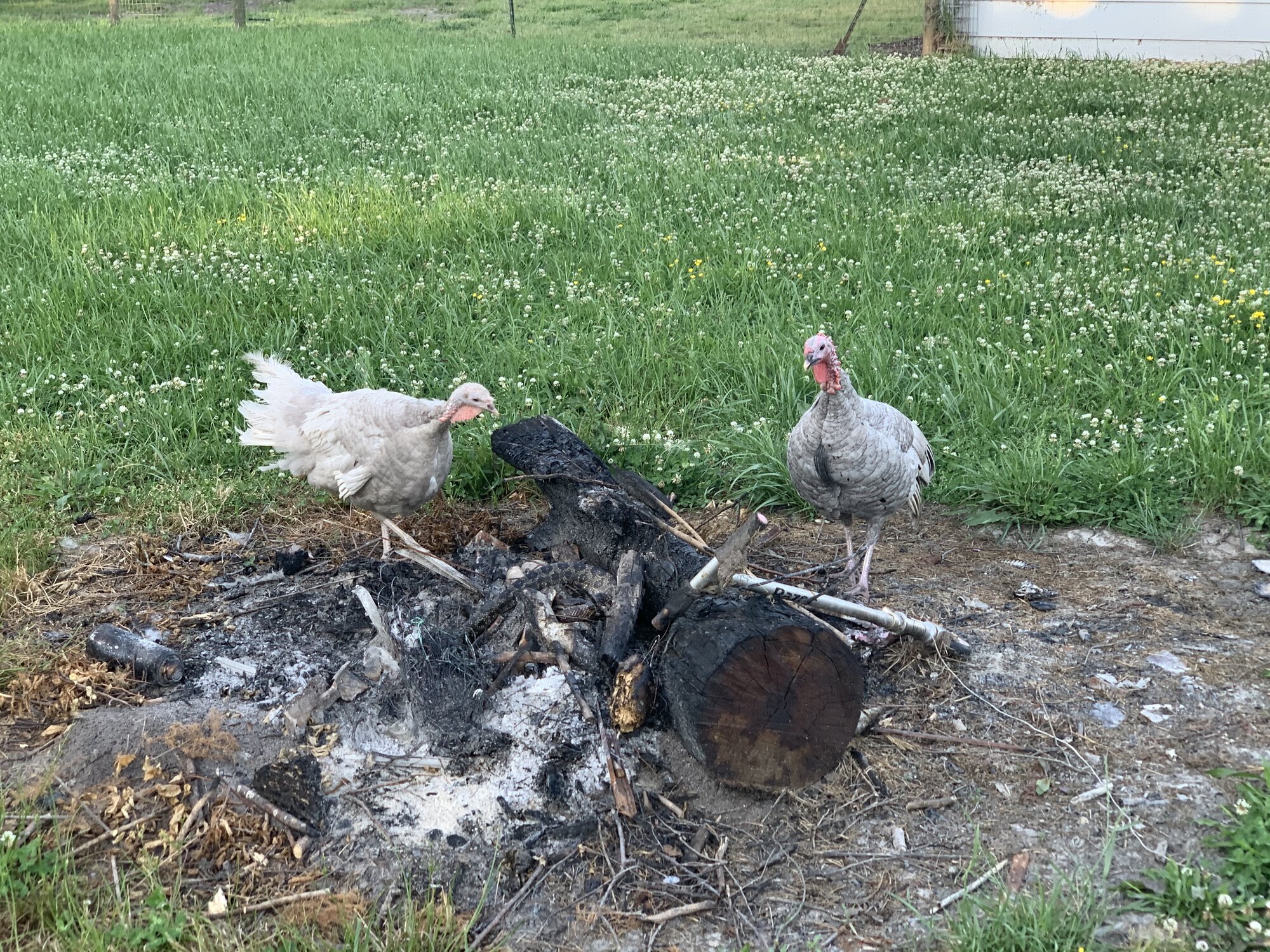 Another one this year: 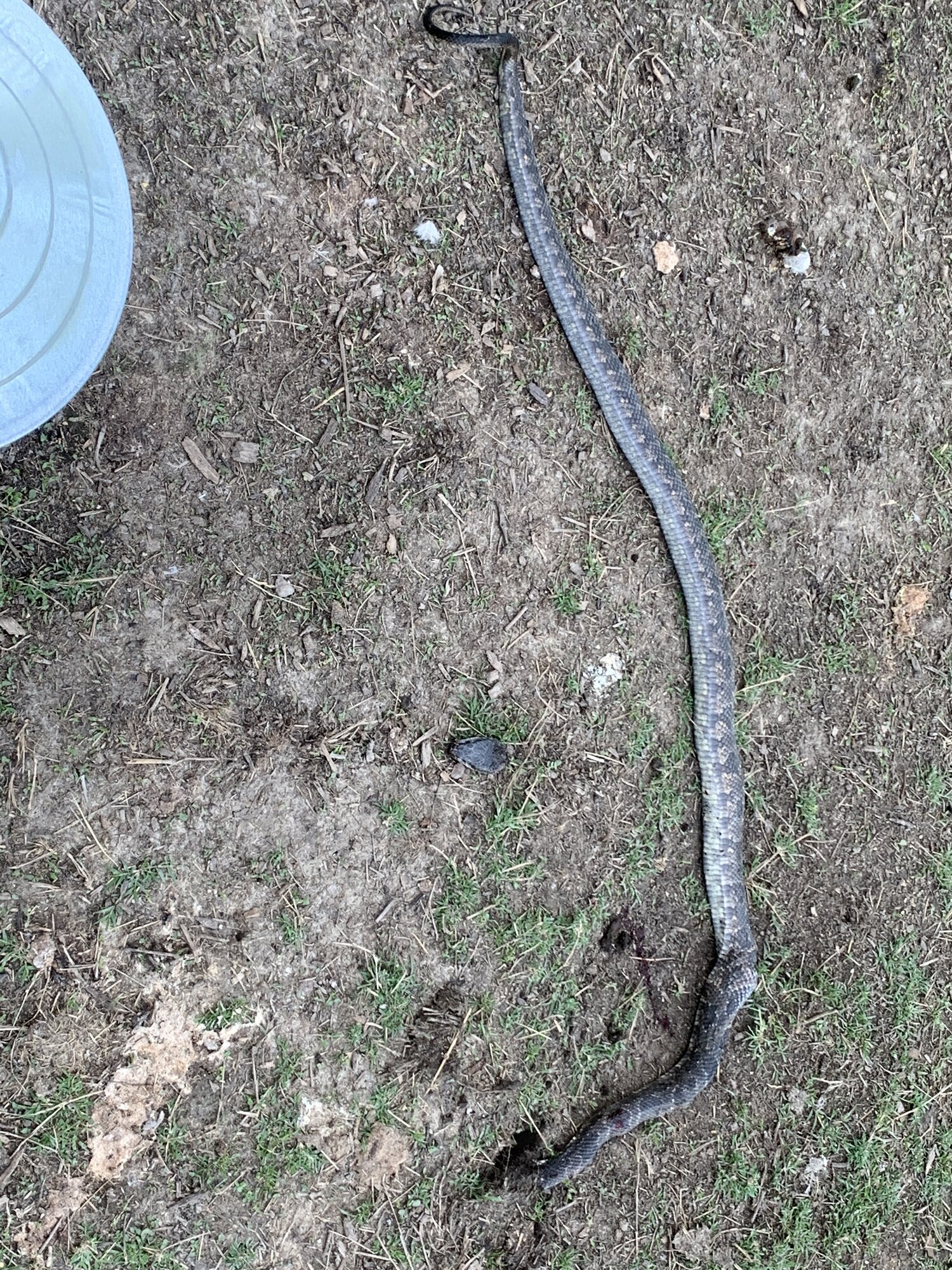 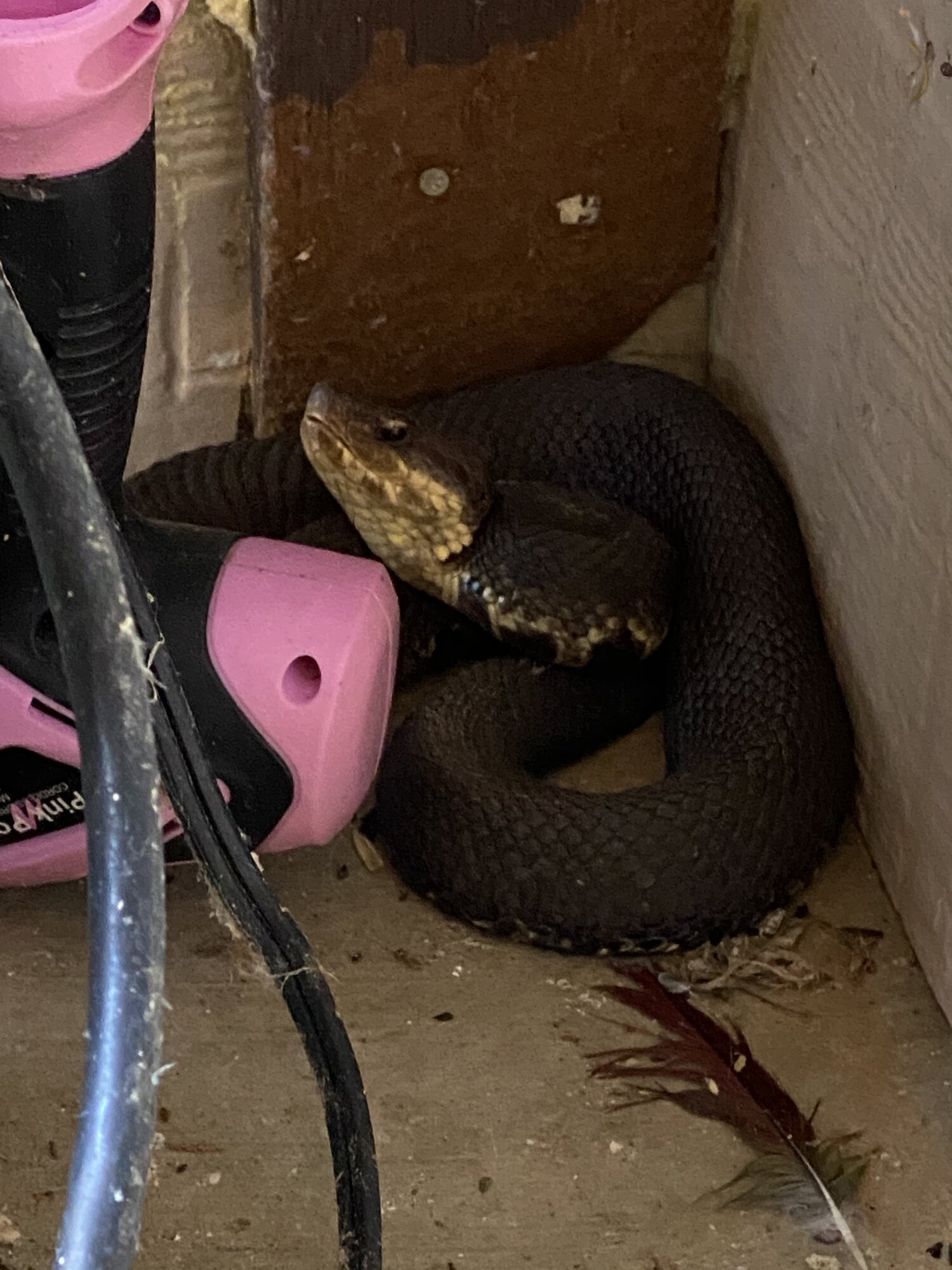 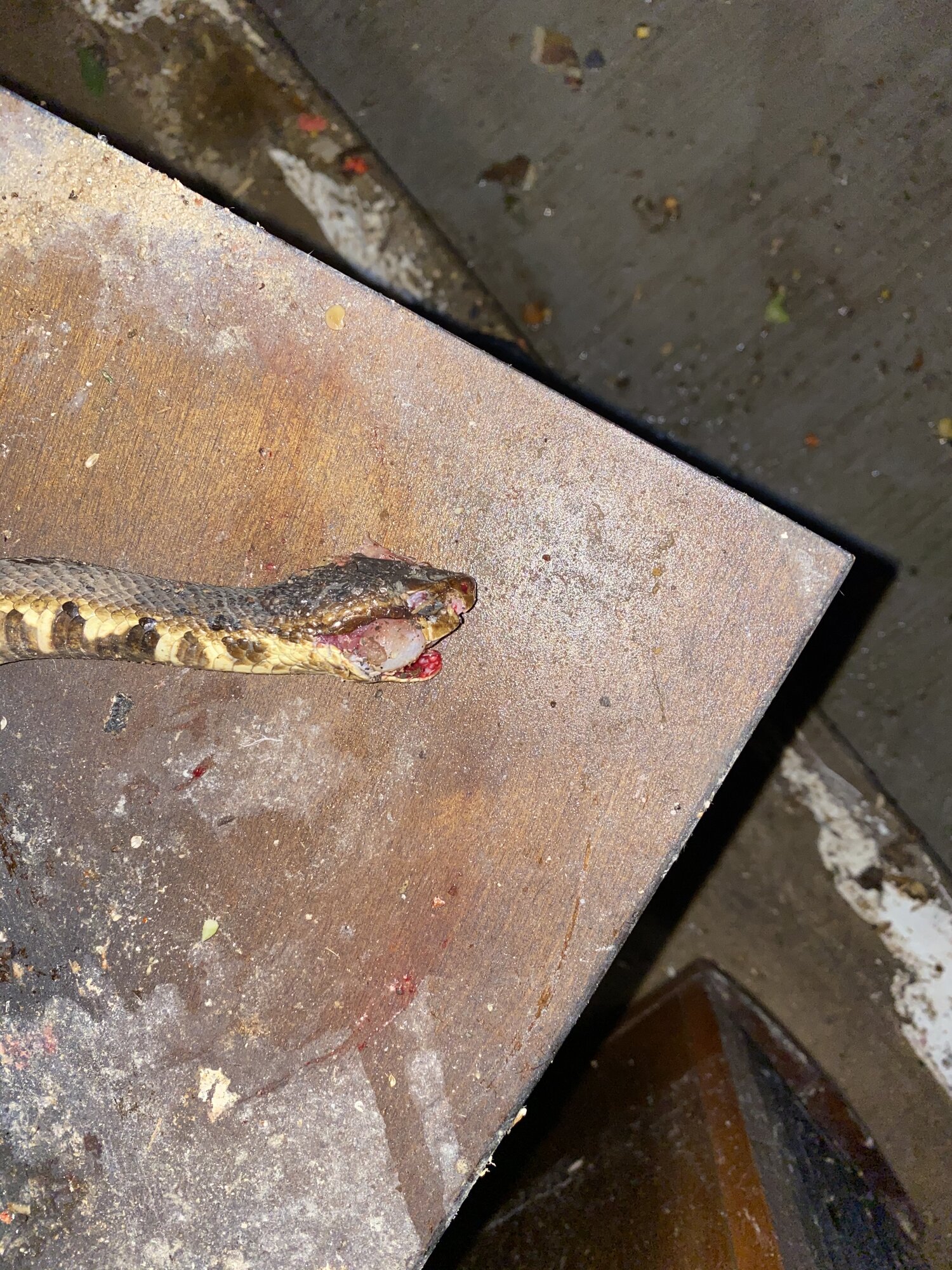 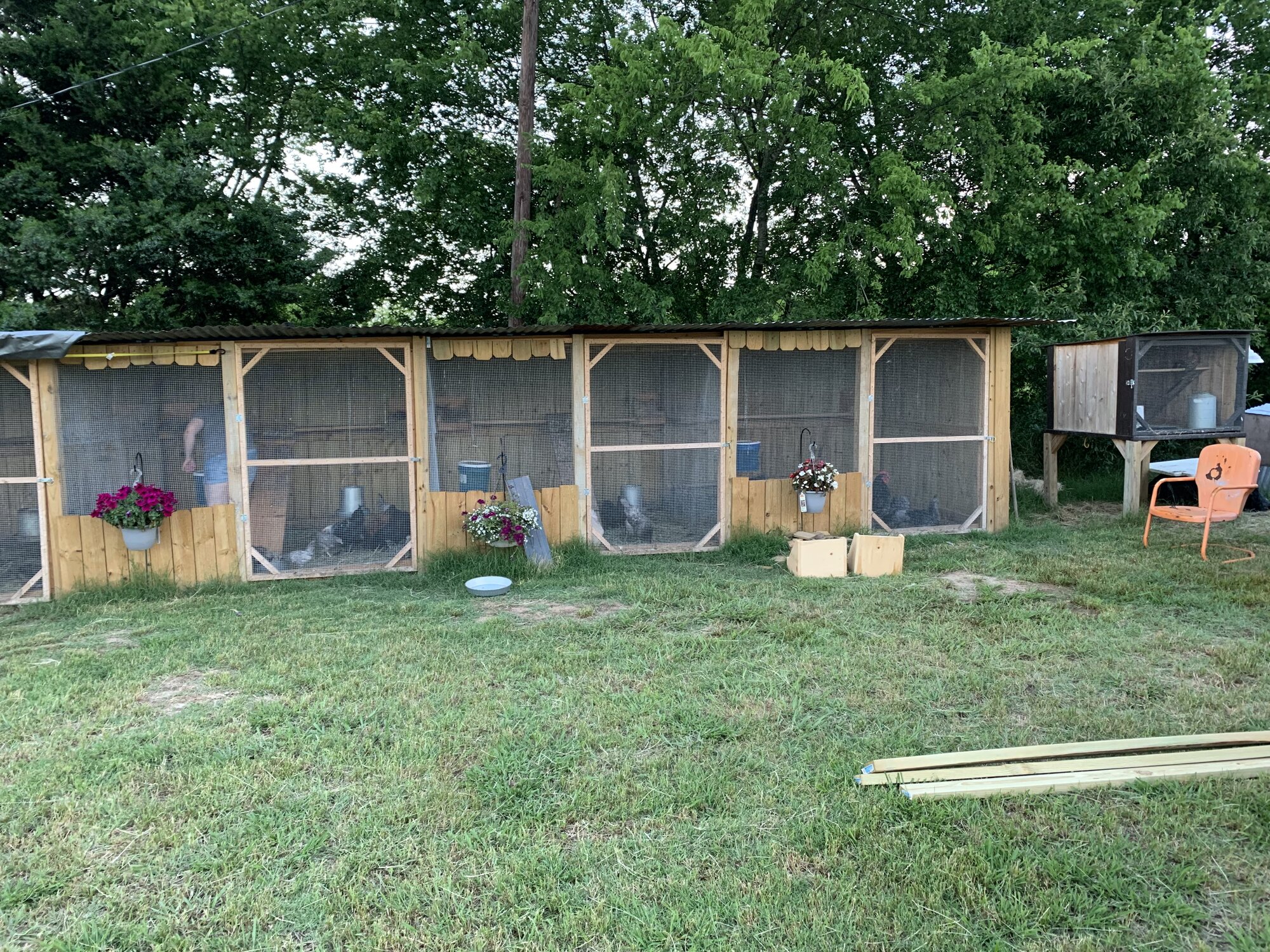 Rat snake in the Meyer's parrot nestbox at my friend'd barn. You can clearly see the large lump that is the 20+ year old male. The hen was calling for him in the cage when she discovered this: 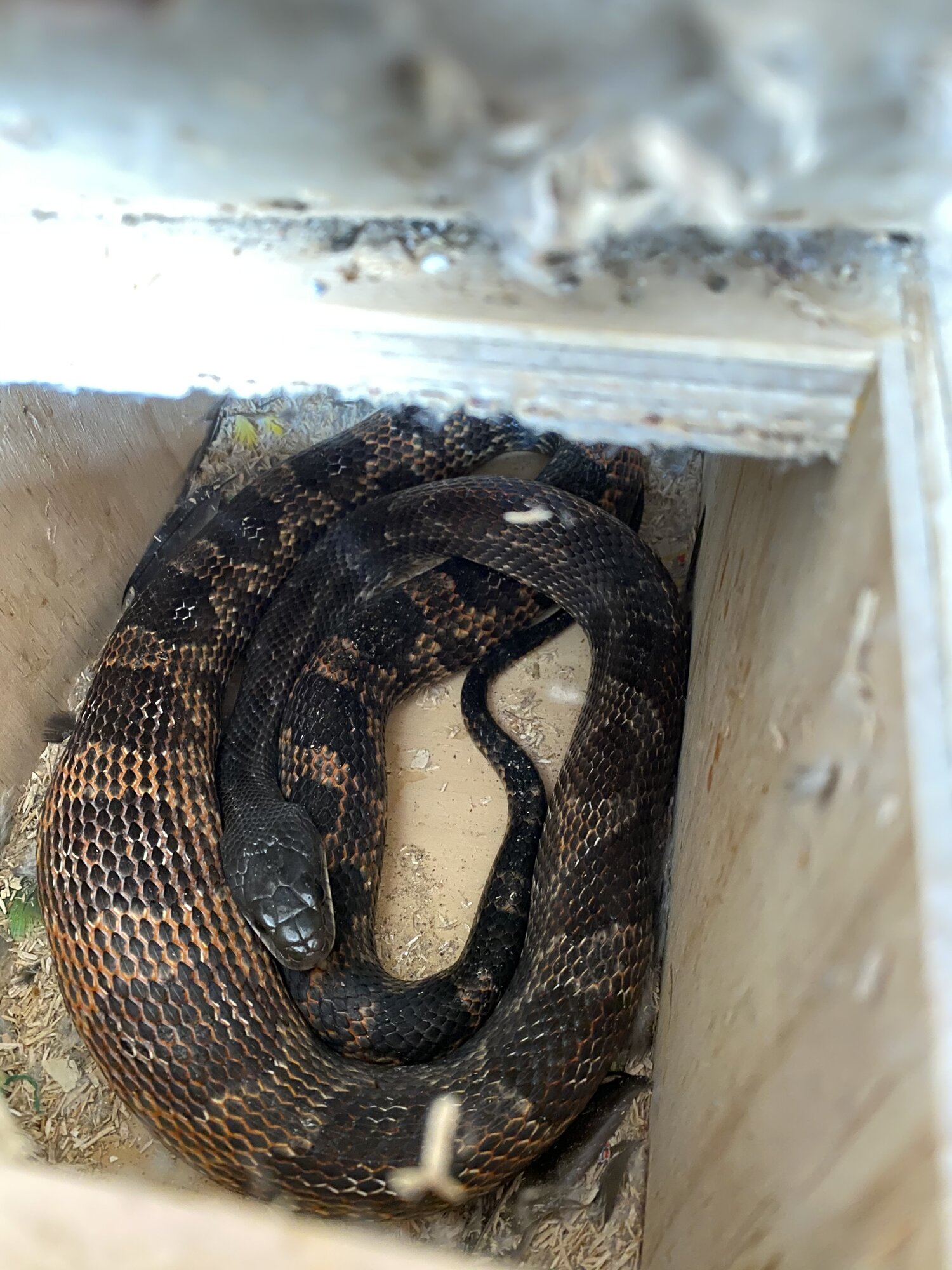 Will One Snake Keep The Others Away?
2