Chocolate Orpington- anyone know if there is a breed standard?

I just wondered if anyone knows where I can find a breed standard for Chocolate Orpingtons (LF)?

Or even just if they can be allowed to have some red feathering. I am trying to set up a breeding quartet. I have 3 pullets and a cockerel who are about 18 weeks old. The pullets are lovely and totally brown (though they did have a sister who had loads of red on her, I gave her to my friend as I didn't want to keep her for breeding- she's gone to be pampered on a farm

). The cockerel has just recently started to show a bit of red feathering around his neck.

I have another 3 younger ones (about 11 weeks old)- none of them are showing red as yet, and I'm not really sure what sex they are yet either. As the 3 older pullets are so nice I guess I'm hoping that one of these youngsters will be a cockerel, and fingers crossed won't have any red (they are from different sources so I'm as sure as I can be that they are unrelated). But I would be interested to know if the red in the feathering is permissable.

Any info would be very much appreciated

Quote:they suppose to be self chocolate, I assume some leakage its ok with breeders, but not to be showed.. 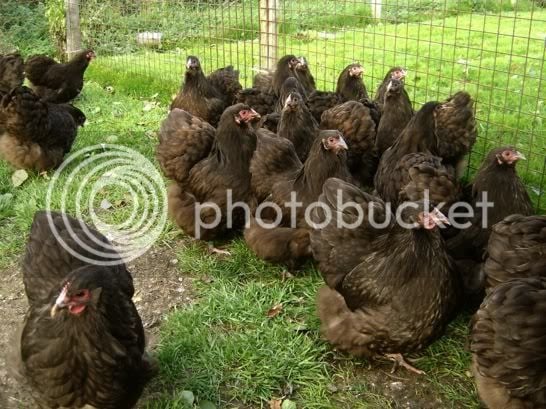 You will need to get a Standard from England as one does not exist in the US.

Quote:you make it sound like they need to zip on over the pond and get one

I would assume you can just forgo the plane trip and look on the internet for the english standard for orpingtons. I havent read one lately to see if Chocolate is an allowed color, if it is it might talk about leakage on them. Bet some of the english breeders both here and there will chime in and tell you whether or not you should use it for breeding.

The type standard would be the Orpington Standard.

The color standard would be chocolate in any accepted variety. Since the imported Orpingtons are the first true Chocolates in North America, no color standard exist here. Perhaps a breeder in England etc will either post a copy or email you a copy.

According to the standard I have seen the only accepted colors in England are Blue Black White and Buff but thats for LF idk about bantams. The color would just be self chocolate, which is usually a dark brown color.
Last edited: Dec 30, 2011

Also do you want to breed to the American Standard or the British Standard?

Thanks for all the replies everyone

Would be British standard as we're in England. Am crossing my fingers that the smaller ones don't end up with any red and that one of them is a cockerel!

Quote:Oh ok cool, you should buy the British Poultry Standard that will have what you need.
Last edited: Dec 30, 2011

Origin: England. First bred by Dr Clive Carefoot between 1993-94. It was bred as part of the Black Orpington Breeding Project. They are the rarest variation of the orpington breed of chickens.

Carriage: Bold, upright and graceful, an active bird.
Type: Body is deep, broad and cobby. Back is nicely curved with a sharp and concave outline. Saddle is wide and slightly rising with a full hackle. Breast is deep and well rounded. Wings are small, nicely formed and carried closely to the body. The ends of the wings are almost hidden by the saddle hackle. Tail is short, compact, flowing and high but not a squirrel tail.
Head: Small and neat, fairly full over the eyes. Beak is strong and curved. Large bold eyes. Single, small comb firmly set on the head. Comb is evenly serrated and free of side sprigs. Face is smooth. Wattles are of a medium length being oblong in shape and nicely rounded at the bottom. Ear-lobes are small and elongated.
Neck: Medium in length, curved and compact with a full hackle.
Legs & Feet: Legs are short and strong. Thighs are almost hidden by the body feathers and are set well apart. Four straight and well spread toes.
Plumage: Fairly profuse but close and not soft, loose or fluffy and in the Cochin or close and hard as in the Game Fowl.
Handling: Firm.

The general characteristics are similar to the male except that her cushion should be wide and almost flat and slightly rising to the tail.

Colour: Chocolate brown all over. Beak is brown, eyes are either dark brown. Comb, face, wattles and ear-lobes are bright red. Legs and feet are pale.