Circulation cut off in foot

Hi folks,
One of my guineas had a string wrapped around it’s foot. The circulation must have been cut off, because the string was super tight, and the foot was swollen. I don’t know how long it’s been on, or how it got there. We’ve had problems in the past( coop windows shot out, doors opened, more string ect.) It appeared to be tied on: 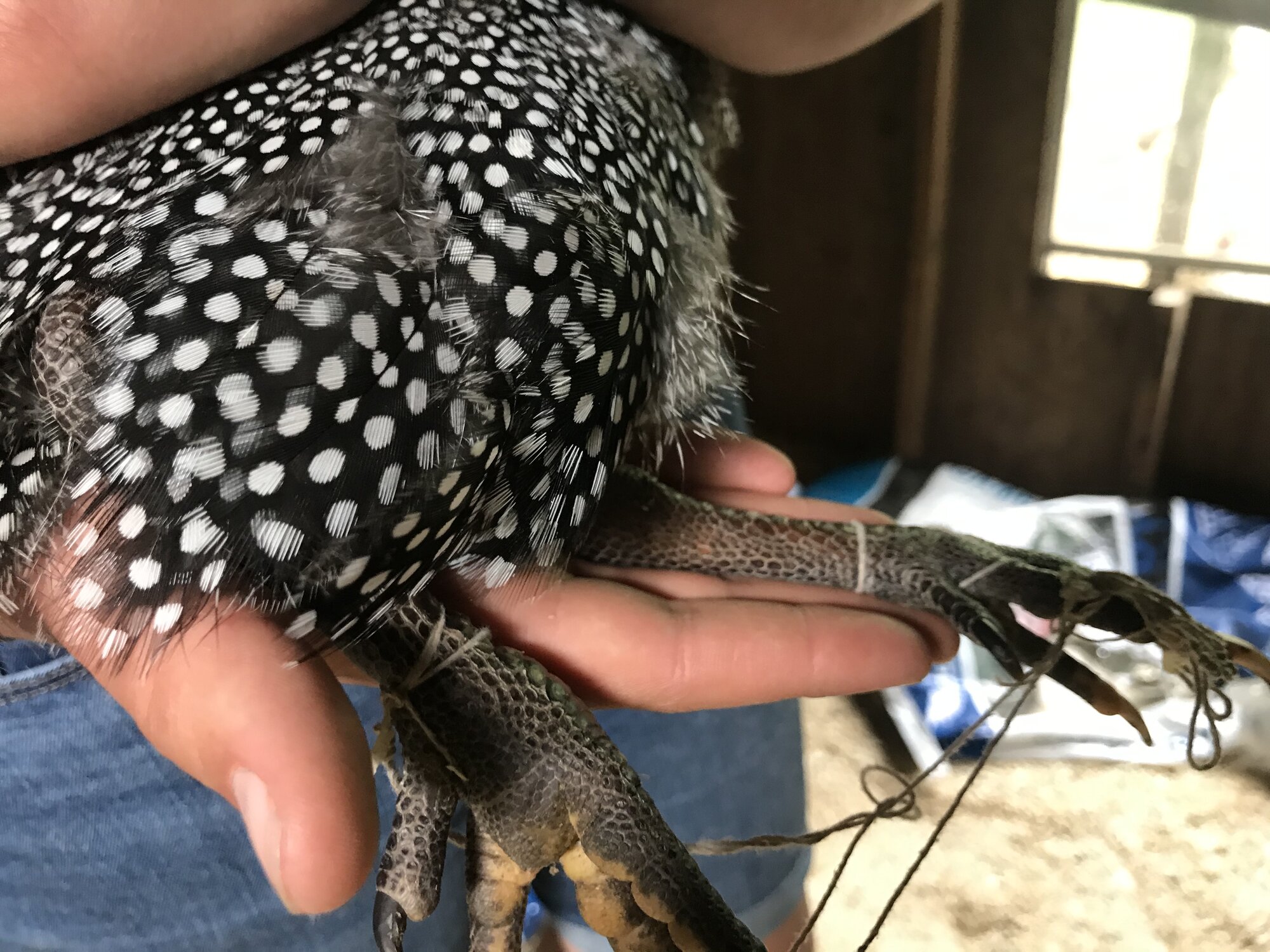 I cut the string off, but it’s still having trouble walking. I rubbed the foot in attempt to bring back circulation, but I don’t know if it helped. Is there anything else I can do? I feel terrible

. I’ll be putting up cameras ASAP!
Thanks in advance!

Sorry about the guinea. Is that a string around the other leg as well? Remove it right away. That looks like it could be the string off of a feed bag. The toes appear black compared to the others. If it was tight for long, there is a possibility that the foot will become necrotic or dead. Let’s hope not. Can you feel if the foot feels warm? I would try soaking the feet in lukewarm water with Epsom salts daily. Do not rub the leg, since if they are compromised, it might damage it further. I really hope that it is not permanently damaged. You should know in a day or two.

Thanks. The string was around the other leg as well, but I did remove it(forgot to mention it) It does look like a feed bag string, I didn’t notice that! I think that the legs/feet were warm. I’ll try soaking it daily, and I won’t rub it anymore. Thank you so much! I’m really grateful. I also hope it’s not permanently damaged.

Sorry I didn’t reply yesterday. I was so busy

The guinea was doing better, and could walk around with a limp. I’ll soak the foot today, and let y’all know how it’s doing!

Glad that she is walking, and I hope that she recovers. When I open feed bags, I religiously remove those strings and put in my pocket for the garbage. Strings get swallowed by chickens and are nortorious for getting wrapped around feet. I think reading emergency posts here has made me very paranoid.

Eggcessive said:
Glad that she is walking, and I hope that she recovers. When I open feed bags, I religiously remove those strings and put in my pocket for the garbage. Strings get swallowed by chickens and are nortorious for getting wrapped around feet. I think reading emergency posts here has made me very paranoid.
Click to expand...

Yeah, I should be doing that. Normally I don’t take the string off all the way, and put the bags in the coop ‘loft’. I like to hang them behind roosts.
I’ll be WAY more careful nextime. I don’t want this happening again.

Just wanted to let y’all know that the guinea is doing great. The limps gone, and the toes feel warm and move normally. I unfortunately had to rehome the guineas ( I still had to build them a separate coop and train them to free range, and I was too busy) but they’ll be happier at their new home. They went to experienced guinea owners with acres of farm land to roam, and an old cattle barn to sleep in. Many thank for your help and advice!

That is great news. Glad that she is alright, and thanks for the update.

Injured duck - trying to figure out how to help
2

I can’t find the bumble!