Sweet, funny, confused Ramen arrived in a box of Muscovy ducklings we were given at the end of June. We were told a chicken had laid her egg in a Muscovy nest. Ramen was hatched by a broody Muscovy, and has lived with his siblings since arriving (except one terrible night that he slept with the Big Girls, and was found curled into a fetal chicken position behind the water dish the next morning, visibly terrified).

We know his father was a massive light Brahma, but his mother is a mystery.

He feathered out very, very quickly. The oldest ducklings in the picture below were just under a week old. Ramen was probably around 2 weeks old, I'm guessing, with the difference between chicken and Muscovy incubation times. 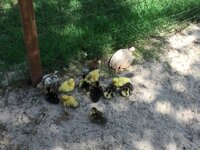 The above picture is tough, with all the birds, but Ramen is most upper left bird, beside the fence post. 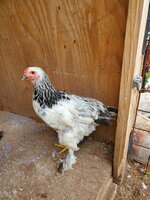 The pictures above and below were taken today, at a guesstimate of 12 weeks old. His hackle and saddle feathers don't scream cockerel, but seem more angular than rounded. 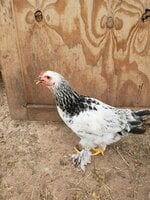 No crowing at all yet, and is in fact just started experiencing the voice chance from "peep" to "buckaw!".

We've really been hoping for a pullet, because we can't legally have a rooster within city limits, and this is a very flock oriented, very watchful, very funny and sweet bird that's going to be an amazing rooster if he overcomes his fear of women when he hits puberty.

Unbridled thievery of tomatoes notwithstanding, Ramen the Half Brahma is a great bird. Just hoping my novice experience is leading me to the wrong conclusion, and hoping for the wisdom of those who know more than myself.

I have a few light Brahmas my guess is cockerel. They develop slower than others, I have a four month old who isn’t crowing or at least I haven’t heard him crow yet.

Mvan42 said:
I have a few light Brahmas my guess is cockerel. They develop slower than others, I have a four month old who isn’t crowing or at least I haven’t heard him crow yet.
Click to expand...

Ramen is a cute name for him.

I can see the pointy saddles starting.

Also my pullet same age has hardly any comb or waddles yet...

Mvan42 said:
Also my pullet same age has hardly any comb or waddles yet...
Click to expand...

Yeah, I was very suspicious about the rapid comb/waddle development. My husband has spent three months calling poor Ramen "her".

Definitely a cockerel. The comb and wattles leave no doubt.

I was really hoping that I was wrong. Sigh. I think he's going to make an amazing guardian and protector - he already is with his ducklings. I've never seen a chicken so watchful and aware, even at night. I have yet to be able sneak past him doing bed check. Ever. He sounds the alarm before I get to the duck yard gate.

I hate city ordinances. We were under the mistaken belief that our Silkie was a pullet when we bought our house in June. We had no interest in having a rooster, because we have a one year old son, and both had read many horror stories. But it sucks seeing the potential good in a young cockerel, and know you have to roll the dice with his future by either hoping he has a low volume crow that the neighbors won't complain about, or entrusting a complete stranger to give him the chance you wish you could.

He is very handsome, and I do hope he finds a home.
Move to farm country, and enjoy all your birds!
Mary