Sally PB said:
Depending on how often I turn it, and how active it gets, it can be done in 3 weeks.* Then it can go on the garden, or sit until I need it. ... *This is the "hot" method of composting. Yup, lots of labor, but sometimes I'm in a hurry for some compost.
Click to expand...

Wow, 3 weeks is amazing, but if you put all that work into the turning of your hot compost piles, then you deserve the rewards. My strategy was to make more chicken run compost then I could use, so I always have compost in the run ready to harvest when needed. It took me about 6 months of adding material to the chicken run to get to the point where I now have more compost than I can use. I continue to add material to the chicken run all the time, but I'm never in a hurry to make compost as I have more than I can use.

Last year, I was giving away chicken run compost to my good neighbors for their raised beds. They loved it. And I still have more compost in the chicken run than I can use for myself.

Also, another pitch for my cement mixer compost sifter.... I can sift out 6 cubic feet (3 bags of compost) into my gorilla cart in about 15 minutes. The sifted compost goes to the garden and raised beds, and the unfinished compost gets thrown back into the chicken run. Anyway, I used to buy compost at $5 per bag at our big box stores, but now I can process compost from my chicken run at the rate of about $120 per hour (if I had to buy compost bags at the store). My days of needing compost in a hurry are behind me. I got years worth of compost ready to harvest in my chicken run.

RubelliteRose said:
... periodically sift out my finished compost and then return unfinished parts ...
Click to expand...

In a single person household with dry summers and unpredictable cold weather, it takes forever for composting. I have yet to see how chicken leavings will impact, as I deep litter and my flock is young.

I could easily see harvesting what is available as it becomes available. How do you go about sifting your compost for useable stuff?

When I suggested moving the compost pile into the chicken run and letting the chickens spread it around, I meant to move the contents of the pile, not put the bin in the chicken run.

So what you are saying and what I was trying to suggest are the same thing.

My experiences are about the same as yours. The chickens eat the most attractive stuff first, so it's not lying around to attract anything else.

I'm different than "everybody," because I DO give moldy food to chickens. They typically eat it, mold and all, and do not suffer any harm that I can see. It is usually small amounts: the last two slices in the bag of bread, the cheese that got forgotten in the back of the drawer, the strawberries that got mushy and have a touch of mold.

Some molds might be toxic, but not the kinds that I have encountered on bread or cheese or produce. The bread mold and cheese mold haven't hurt people either, when they had a bite or two before they noticed something was off.

MTKitty said:
In a single person household with dry summers and unpredictable cold weather, it takes forever for composting. I have yet to see how chicken leavings will impact, as I deep litter and my flock is young.

I could easily see harvesting what is available as it becomes available. How do you go about sifting your compost for useable stuff?
Click to expand...

I built a frame out of 2x4s and attached 1/2" hardware cloth to the back. The frame fits over my wheelbarrow so the finished compost falls into it. However, it is a lot of work, so I think I will try building a tumbling sifter similar to this one that I found on Pinterest. Unfortunately, no instructions, just a photo 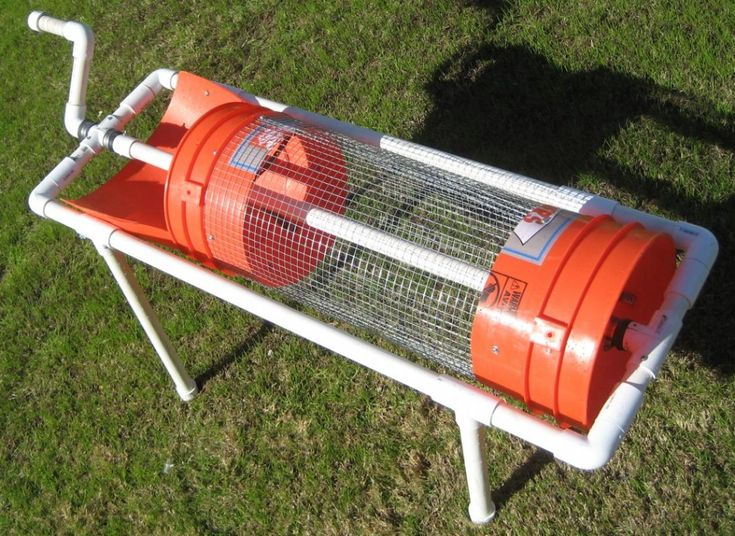 RubelliteRose said:
I built a frame out of 2x4s and attached 1/2" hardware cloth to the back. The frame fits over my wheelbarrow so the finished compost falls into it. However, it is a lot of work, so I think I will try building a tumbling sifter similar to this one that I found on Pinterest. Unfortunately, no instructions, just a photo View attachment 2868049
Click to expand...

That gizmo is cool. PVC must be the ultimate diy supply.

After starting a small compost pile, I ran into the direct method of composting. I like this idea because I need to bury my kitchen waste to discourage scavenging (bears, coyotes, neighborhood dogs). I think I might give that a try on a new bed I plan to create next spring.

The only drawback for me might be leaving a bed fallow while I compost to it because of my dry summers.
S

@gtaus, can you link to your article/thread about your cement mixer sifter, please?
S

MTKitty said:
I ran into the direct method of composting.
Click to expand...

My neighbors do this form in buried buckets, which they call worm hotels, with great results.

gtaus said:
Yeah, you really got a good thing going with all that food waste product. If I had that much food scraps for my chickens, I doubt they would need any commercial chicken feed at all.
Click to expand...

I’m going to use the magic quotes to work through the goodness bit by bit.

My flock still gets commercial feed, but on a good day they get a lot of their nutritional needs from the compost & food waste.

If I was going to go “pellet free” the big thing I’d need to do different is add protein. They get plenty of worms and bugs, but to consistently hit the mark on protein I’d need more meat scraps. If I lived in an area with invasive fish species, I’d be dusting off my fishing pole to go do my part keeping population in check.

I do “treat” with 30% game bird starter to up overall protein.

I do see some moldy items…it’s well under 5% of the material (probably 1-2%). If I see something obvious and accessible, I do sort it out and toss it into a composter outside the run.

Generally speaking, though, you’re right…they ignore the moldy stuff and focus on their favorites. I imagine that in a system of plenty, this is the case…if their only option was moldy feed, there would be more risk they’d eat it.

I’ve also noticed that any mold disappears after a week or so in the compost - not sure why, but the compost microbes seem to eat the mold.

Composting in the run?
2

How to determine quality of different types of compost?
5 6 7