Below is a link of the previous update and where I was at that point, and below that will be the continuation.

So 9 weeks of unemployment kicked in, and I was able to get the supplies I needed to finish building the Goose Condo, and I will get into the Condo after I talk about Crash & Bash.

Bash
He is starting to get an angel wing, so the wife and I have been wrapping it every day, but the two work together to rip it off, even going as far as getting in the water dish to get the tape wet. His right eye has an infection and we have been fighting to get it cleared up by getting droplets from the vet, and Terramycin ointment. The poor guy as of late has been falling over onto his back and not able to get up. I checked on them at midnight and he was fine and sleeping, then checked on them at 6am. He was upside down with a big pile of goose shit, so he had been there for awhile. He is scared to lay down right now and tries to sleep standing, thus falling over onto his back again and getting stuck again. Last night I stayed up with him out in the Condo all night to make sure he was fine. It was a sleepless cold night, but I had to be there for him.

Crash
She is doing awesome. She walks around the goose condo like a T-Rex memorizing the layout and where everything is. She is a lil' wobbly, but we are making sure they are getting their vitamins and nutrition. When I slept in the Goose Condo last night I had an old patio furniture pad down where I was laying, and Crash was cuddling with me on it between my legs. This morning we set it up out if the way. She was making laps for like 30 mins, making big girl honks, then the wife put the pad down to see. Crash did her namesake and came crashing in like the kool-aid man onto the pad and was immediately asleep. I have spoiled that goose since she was a day old cuddling with her on the pillow. LOL

So we got them a swimming pool, and here are some videos of them swimming. Crash acts like a seadoo does doughnuts, its great. While Bash will go to shallow part, start bobing and fall asleep.

Some older videos of when they were younger
note: I still am not a 100% sure on their genders, and in one video I call Crash a boy, but I have stuck to her being a girl, so she can be my lil' princess.

Now the Goose Condo is pretty much done, just finished the outside run today. Im just going to post pictures of progress and then final product at the end.

Also on the outside wall there is a door that slides up, so they can go out into the run. I have latches so when its down lil' raccoon hands cant push it up, and when its its I have latches to keep it up and not let it become a Goose Guillotine. All in all not bad for winging, and damn rubber mats are spendy. After their first night in there and shitting all over them I decided to throw hay down for extra insulation and to protect my precious mats xD 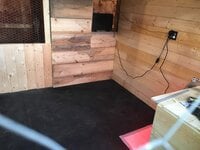 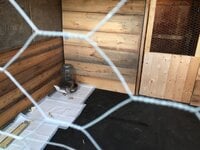 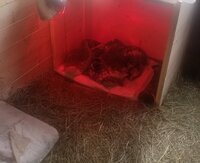 Sigh. Just went out and checked on them. Both of them were upside down. Crash was all good as soon as i set her up right, but Bash needed some cuddles and tucked back into bed.

In their nesting box I have a blanket in U shape that I place him into, so he has the blanket to support him on all but butt to stop him from rolling to the sides onto his back and so he has a head rest.

Do you know why the end up on their backs? I really hate to tell you this but chicken wire does not keep predators out only our birds in. The area you have made for them is so nice love all the pictures but I’d get 1/2” hardware cloth and cover every opening.
D

I can add the cloth.

My wife was pretty worried last night so we brought him into the guest bedroom, and made a bed for him. We are giving him 24 hour monitoring and comforting him and putting him to sleep as soon as he wakes up...besides the breaks for eating and drinking.

Hopefully some good rest will help out his exhaustion.

Thinking about it, its probably why he likes to sleep in the pool, because he can float and stay atop and sleep not worrying about rolling over onto his back.

I will painfully try to record he crying and panicking.

Aww poor baby. Can you imagine where these two little ones would be with out y’all.
D

So we are thinking Bash might have a calcium deficiency. Because he grew rapidly compared to Crash, and my wife was reading it can lead to weak legs, inward feet and hard to control neck...so we are giving him some oyster shells from the feed store that is rich in calcium.
D

I think my Crash Cart loves me. 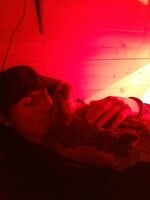 dbabendererde said:
So we are thinking Bash might have a calcium deficiency. Because he grew rapidly compared to Crash, and my wife was reading it can lead to weak legs, inward feet and hard to control neck...so we are giving him some oyster shells from the feed store that is rich in calcium.
Click to expand...

I would like to see where wife saw this? And here is info on niacin deficiency https://www.backyardchickens.com/threads/niacin-deficiency-in-waterfowl.1367557/page-7#post-22735911
D

She is finding me the info on tbe calcium deficiency.

Also this is his right eye that has been bothering him. He rubs it over and over on his feathers. After taking that pic we rinsed his eye with a sterile eye relief eye wash and those white things came out like boogies.

That’s good what ever that is can be washed out does it look like pus? Is the Terramycin helping at all.

White Geese or Swans to scare away Canada Geese?
2