Hi, Im new here. I currently have silkies and cochins, theyre good pets but Id like something a little more productive. Ive been reading about the autosexing breeds in Europe such as the Legbar and would like to try and create something similar. So here is what Id like to create:
 Autosexing
 Dual Purpose
 Blue Egg Laying
From what Ive read to create an autosexing variety you use a chicken with striped down as a chick such as a partridge variety crossed with a barred bird. Since barred is sex-linked when you continue to cross down the line you will end up with hens that have one copy of the barred gene and roosters with two copies. When they have two copies on the striped base it covers the stripe on the back of their heads so you can tell them apart from the females where the stripe is still visible. Here is a chart I found that shows how to make them. 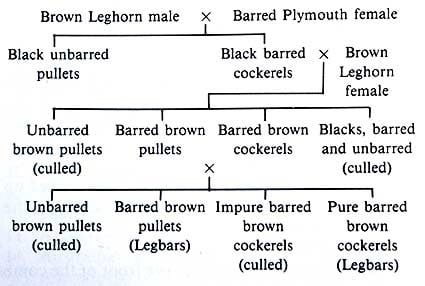 I would like them to be good meat birds as well as good egg layers. I would have a hard time eating them but at least there would be a use for the roosters. I think Id have a hard time getting rid of them otherwise. Nobody really wants a chick they know is a rooster

Anyway, I was thinking of using Easter Eggers and barred Rocks. Would this cross make a good eating chicken? I dont really know what makes a good meat bird. One problem I see is the Rocks are brown egg laying so when crossed with the EE they would be green instead of blue which is ok but I prefer blue. Maybe barred Hollands are a better choice? Does anyone have any suggestion?
If yall think this is a good idea I may start this project this spring. Anyone want to join me? I plan on using hatchery stock since Im not going to be showing them and they will not be a recognized breed anyway. The only advantage I can think of by starting with quality stock is using true araucanas to add a better blue egg color other than that I think hatchery stock would work fine. What do you think? will this work? any more information or suggestion would be awesome. take care

P.S. Just for fun, what do you think they should be called? I like Loxbar since I live in Loxley even though it doesnt come from the original breeds names.

I asked about this same thing the other day and got no replies! I'm glad to see that chart, I couldn't even find that much info.

The Legbars are actually everything you describe, down to the blue egg. I wanted to just figure out how to recreate them exactly, just because I was curious. It seems like the chart you have would pretty much make them, but I don't know at what point they worked the Araucana into the mix. Maybe after they had a reliably autosexing breed? That's the part I can't figure out.

I have one big project I am working on that I would love to also make autosexing and blue egg laying, but I think I would be trying to work too many traits into the same bird at the same time. Large, dual purpose, minimal combs and wattles for cold hardiness, fast grower, beards and muffs are my priorities. Also selecting for egg color and autosexing seems like it would force me to hatch THOUSANDS of chicks instead of hundreds!

It looks like it would take three generations (basically equivalent of three years, unless you have an exceptionally long hatching season) to get birds that are autosexing. Maybe start there and continue to research how to add the blue egg gene later. If you start the project with cuckoo blue egg laying hens, I'm afraid it would be a long road to the "dual purpose" bird, but maybe that's the way to do it, so you don't have to worry about adding it in later.

I'm not all fluff

just putting this out there. what if you started with cornish crossed with blue egg layers. that should give you your blue eggs and meat type- if you used a cornish rock cross with the blue egg layers that would give you dual purpose but green eggs, breed back to blue and maybe? get bluer eggs.
just a thought.

Hm, I wonder if the dark cornish would work? Is there a Partridge Cornish? I would also be concerned about the brown/tinted eggs as opposed to the white eggs of the Brown Leghorn.

Maybe the Dorking would work. They are a good choice for foundation stock because they are such an old breed, but I have heard that it is difficult to obtain good, hardy stock.

I would definitely stick with a white egg layer for your initial male cross if your eventual goal is a blue egg. I think the Brown Leghorn x BR cross is pretty ideal as a start for a dual purpose bird, with heavy culling for meat qualities and maturity rates. I am just not sure where the best point to work in the blue egg gene would be. Maybe start off with BRxAmeraucana barred hens, but even those shouldn't lay blue eggs.

I think dark cornish might work. here is an ecerpt form Poultry breeding and genetics by R. D. Crawford found on google books.

"Autosexing. As pointed out by Silverudd (1974), sex-linked barring (B) could be called the autosexing gene, since it has been the key ingredient in all true autosexing stocks. Sex differentiation is accomplished through the well-established dosage effect of B. On appropriate genetic backgrounds, homozygous barring in males lightens down color appreciably more than does the hemizygous condition in females. This B-associated difference is apparent on a wide variety of phenotypes, but is most obvious on a striped down background."

so it sounds like any genotype that displays striped down would work. this is what got me thinking about using EE instead of Leghorns. then I could just pick out some good striped ones at the feed store and already have the blue egg gene (theoretically). I could always sell the non-blue egg layers. what do you think? I'm still not sure what to use to add the barring gene while not adding brown egg color. maybe after the autosexing trait is set I could cross in cornish to improve meat quality. with a couple back crosses it should be possible to regain the blue egg color. humm... a lot to think about.

Thanks everyone for the replies

The best autosexing breeds are built on the wild type E locus allele- like in the light brown leghorn. If you want a blue egg, you can not use a barred rock in the mix. You will have to use a barred holland to introduce the barred gene. Barred hollands lay a white egg if you use a barred rock you will wind up with green eggs. I would suggest using an ameraucana ( not an easter egger) to introduce the blue egg shell gene. Using a dark cornish is a good idea for the dual purpose attribute but they lay a light brown/cream colored egg which will lead to green eggs.

If you select easter eggers that have wild type down ( which would be a good short cut) you will have to make sure the females are wild type as adults. Birds that are brown at the E locus can also have stripped chick down.

What you want to do would require a more sophicticated breeding regimen than what is represented in the scheme. It can be done.

Yep, one thing people really need to realize is that if you want BLUE eggs, do NOT use brown egg layers to create something that lays blue eggs.

Also, why start outside the Ameraucana / Araucana genepool when looking for barred birds when there are already barred Araucanas around?

I myself have a blue/splash partially barred (diluted by e+ genes) Araucana cockerel and pullet trio that I'm working on cleaning up with. (getting better barring) And I've known quite a few other breeders around with true, purely barred Araucanas. I'm not sure about their egg color, but mine are the bluest of my Araucanas. 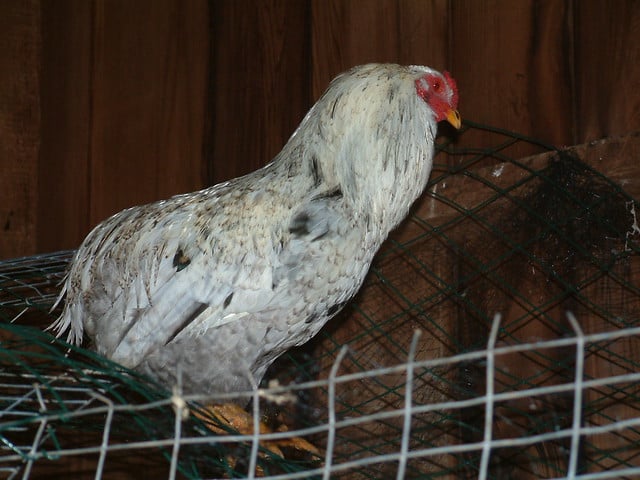 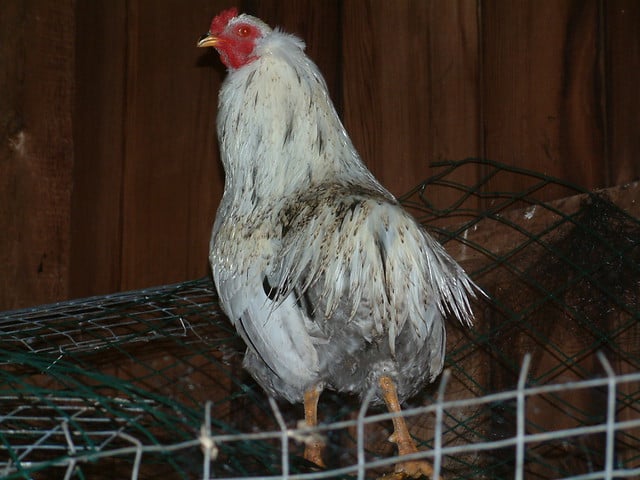 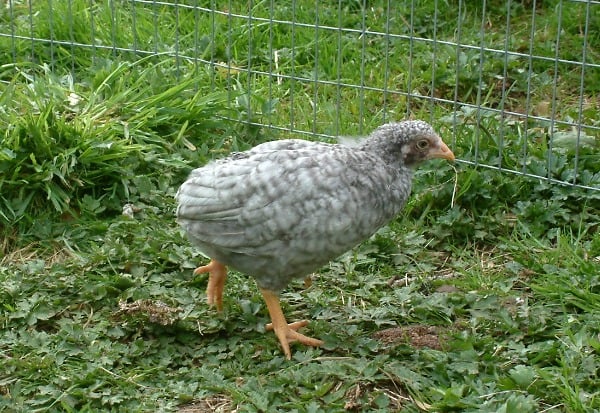 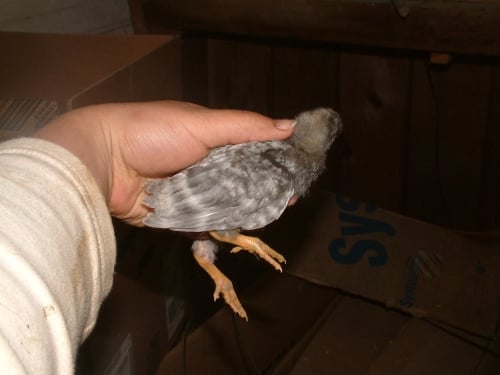 Back at it: Wheaten Ameraucana roo on a the barred production black leghorn. Would it work? I'm hoping I will soon find out for myself, but I'd like to know if anyone's already tried it!

It may take longer to create an auto-sexing breed than you'd think. You would need to stabilize the genome so the chicks have a consistent look. This takes longer than simply producing one bird that meets your criteria. It usually takes many generations.

For example, Reginald Punnett, who with his colleagues at Cambridge invented the cream legbar, first got his hands on Araucana stock in 1929. In 1939, they formally began trying to create the cream legbar. In 1947, they introduced the breed to the public for the first time. In 1958, the cream legbar was accepted into the breed standard. From acquiring foundational breeding stock to breed acceptance took almost 30 years. And, this reflects the time required to create a new breed by one of the greatest geneticists who ever lived who enjoyed the benefits of government funding.

It doesn't mean it can't be done. In fact, I'm sure BYC people could accomplish it. I just think you're looking at many years to achieve the goal; closer to ten years than five years.

Actually, never having had a barred chick before, how "autosexing" is a regular barred bird?

I think a clean barred look is actually much more attractive than these muddy brown barred ones. I know many have created barred EEs, I wonder what is the best way to get clean black barring out of this combo. The hen I have access to is actually already a barred AmeraucanaxProduction black cross. I want to take her back to an Ameraucana, can I breed her to the wheaten and still get black barring or do I need to track down a black roo? Then breed a pea-combed, puff faced barred cockerel back to the original cross-bred hen, or breed him to a pullet from the same breeding?

The formula for creating an autosexing bantam breed?
2 3 4

Does anyone have experience with Lakeshore Eggers from Meyer?