Crop problem in 14 month BLRW, any ideas? Any help appreciated!

We have a 14 month Black laced red wyandotte who I found had a slow/backed up crop about 3 weeks ago. I'm not sure how long it had been backed up because she had been in her hard molt and I wasn't doing health checks as often as I usually do (every couple days). Her crop was about the size of a tennis ball when I discovered it, she hides it well being a large and loose feathered breed. I took her to the vet, they gave her metoclopramide and attempted to take some of the excess fluid/food out. Her crop was full of old grass so they didn't get much out. They sent her home with meds, gave her a shot of the metoclopramide to jump start her digestive system and we fed sparingly and I gave her crop massages several times per day.
After nearly two weeks of this her crop backed up again. It was mostly liquid and it was baseball sized, I was medicating her and she was kept out of the yard. I took her back to the vet, her crop felt like a water balloon. They ended up doing surgery to empty her crop, found lots of grass and cleaned everything out. They sent us home with more metoclopramide, and antibiotics because she may have aspirated a bit when they did the surgery (she was super full and they had trouble getting anything out with a tube. She had surgery on Friday and now, on Wednesday she has a full crop again. She has had access to water with vitamins, but her food is metered out daily so she doesn't eat too much at a time. She has access to grit at all times. I have been giving her coconut oil in her food as well. I am just looking for ideas, I see that she isn't able to digest her food, she is going to eventually head toward starvation and I'll have to euthanize her. I'm just trying not to go that direction, I don't want her to suffer.
Some other things: She isn't laying because of her molt, I and the vet both checked to make sure it wasn't an egg issue. She has generally been healthy before this. She is currently alert and somewhat active, but spits up food and fluid, probably 10 ml at a time maybe once per day. They did take x-rays and nothing abnormal showed up. Her bloodwork was completely normal except slightly low calcium, probably due to her being on all flock with calcium free choice. Her poops are weird, I will post some of the worst ones. The picture of the enclosure is her spit up. 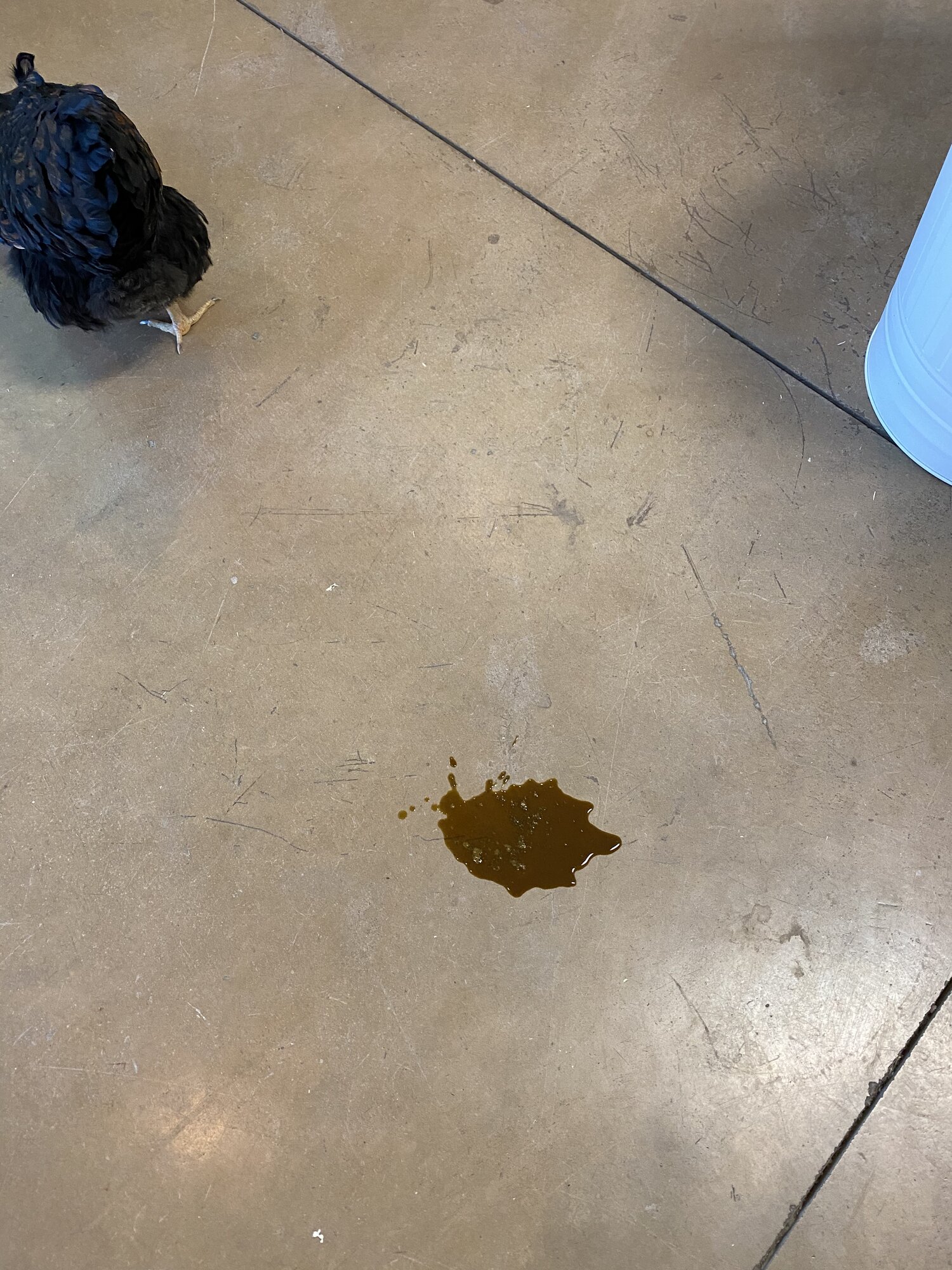 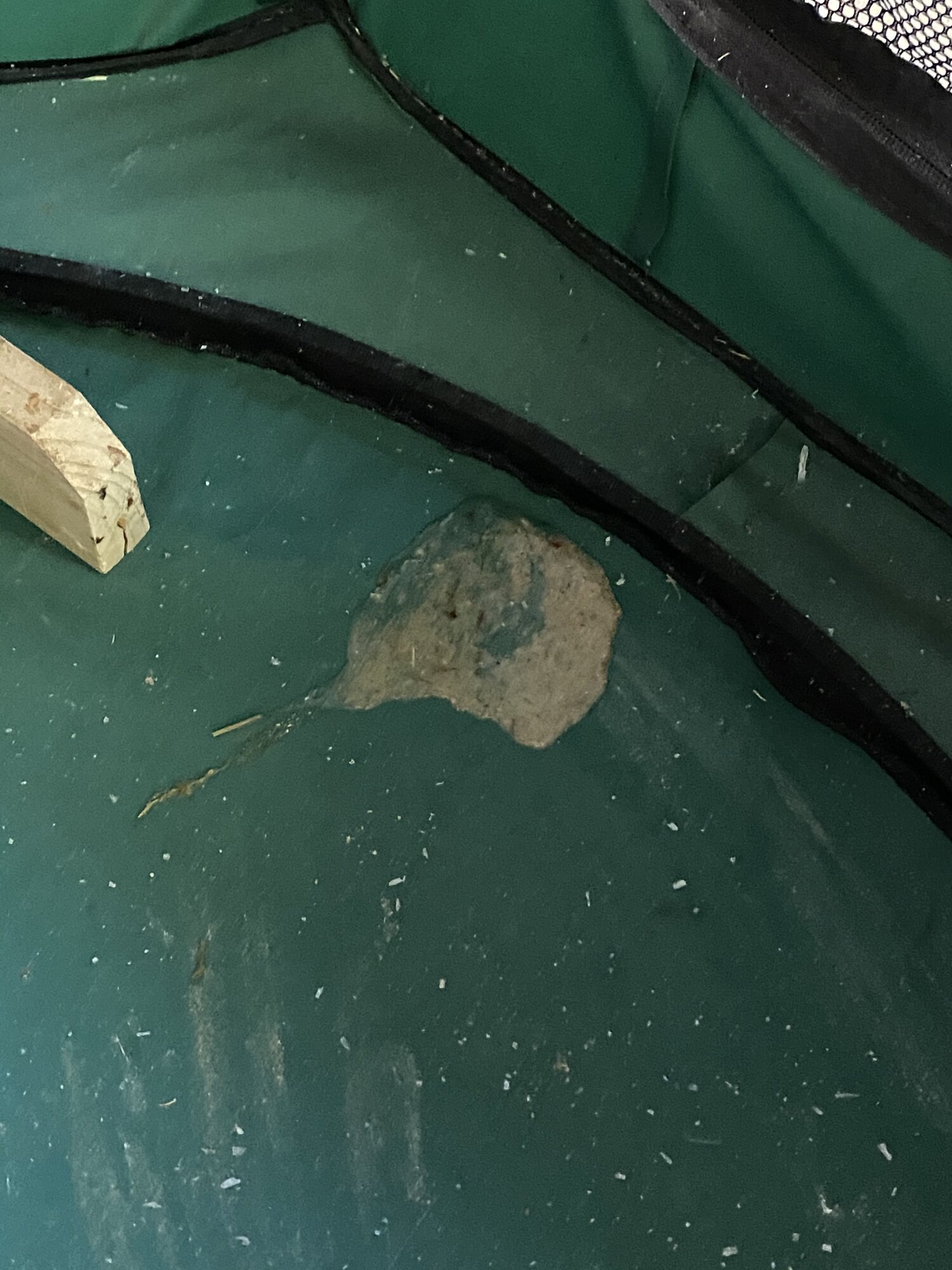 Your hen has had all of the benefits of vet care and surgical removal of the crop obstruction. So that leaves possible gizzard obstruction still slowing movement of material through her body. You can try a molasses flush after giving her more oil with a stool softener. Let the latter two work for about an hour. Then give her one-fourth cup of warm water with one teaspoon of molasses stirred in. Try to encourage her to drink it all.

If this doesn't work, then there may be something else obstructing her digestive system such as tumors that may not have shown up on the Xray.

azygous said:
Your hen has had all of the benefits of vet care and surgical removal of the crop obstruction. So that leaves possible gizzard obstruction still slowing movement of material through her body. You can try a molasses flush after giving her more oil with a stool softener. Let the latter two work for about an hour. Then give her one-fourth cup of warm water with one teaspoon of molasses stirred in. Try to encourage her to drink it all.

If this doesn't work, then there may be something else obstructing her digestive system such as tumors that may not have shown up on the Xray.
Click to expand...

Thank you, I will do this today. She's part of a shared flock with my best friend and she is going to come home with me for Christmas and the weekend so I can keep a very close eye on her. In terms of a stool softener, you mean docusate sodium, correct? I don't know that she has enough room in her crop for the 1/4 cup of water and molasses, but I can try. This morning with water withheld her crop is tennis ball sized. I did worm her yesterday as a last ditch effort in case there is a worm issue. I hadn't thought about it because I wormed her before her molt about 1.5 months ago.
I agree with you about the tumors, that is what I told my friend when we talked about it yesterday. I am doing what I can, making her as comfortable as possible and looking toward possible euthanasia and necropsy so we know for sure and can put measures in place in case it is something we could have done differently.
Thank you for your reply, it is very much appreciated.

Yes, you have the correct stool softener. A worm load can also obstruct the digestive tract, so that was a good move to worm. The molasses flush can help clear the intestines of any dead worms following worming. Try to get the entire amount of molasses solution into her, even if it requires syringing a little bit at a time over several hours. It's a last solution before assuming cancer tumors which can be very tiny and not resemble a typical tumor mass. It's good you're planning on an eventual necropsy. If cancer tumors are found, they may be from an avian virus and this can have consequences for the flock.

A
Chickens crop is literally rotting off
6 7 8