Since I am hatching eggs out I thought I would experiment on making my own meat birds. Last year I bought 4 Red Rangers at Tractor Supply and 2 turned out to be females so I kept them to breed with. So far I have bred them with what was supposed to be a pure bred Ayam Cemani but turned out to be a cross that happened a little on the large side. Next was a Silver Grey Dorking. 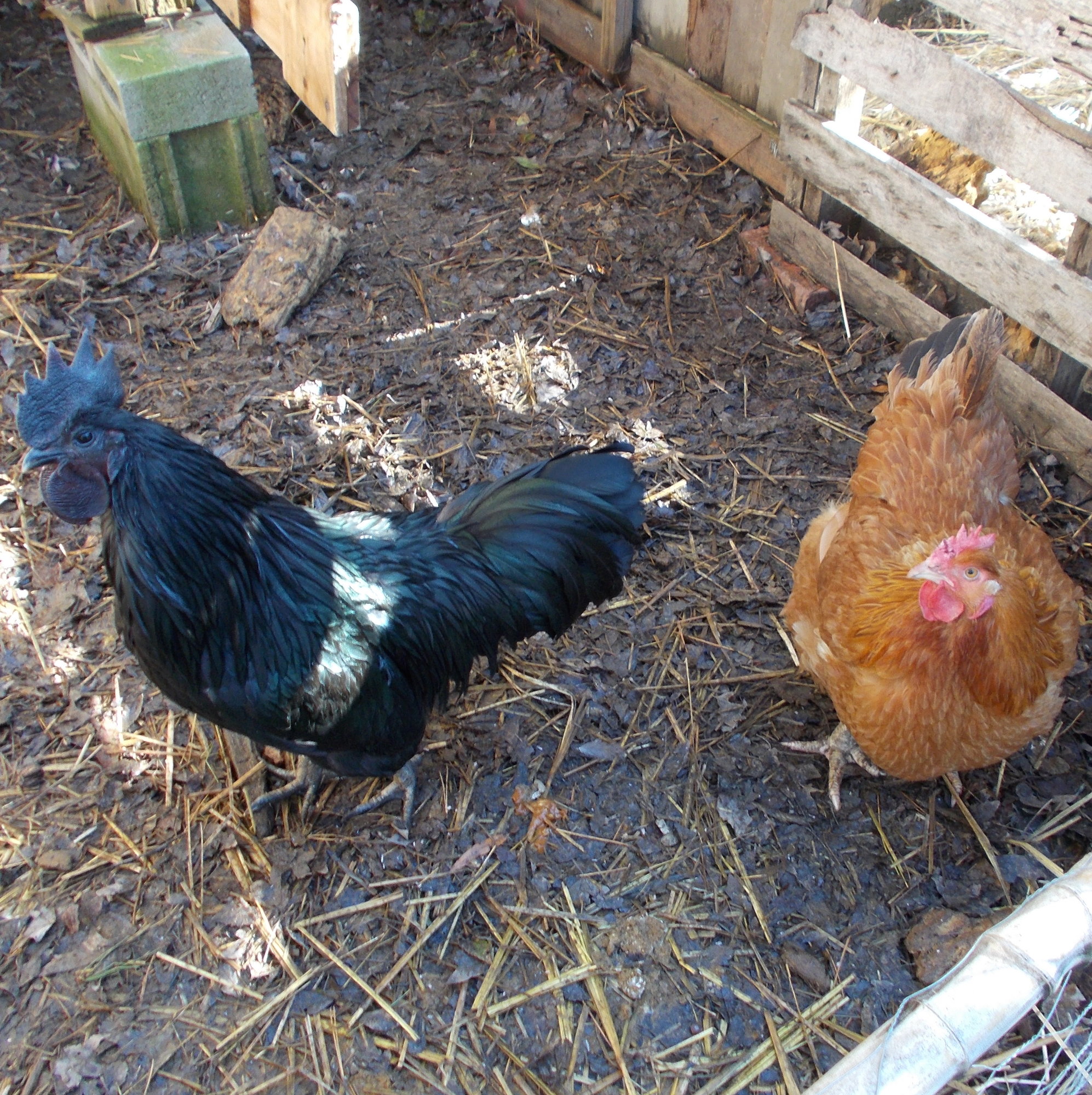 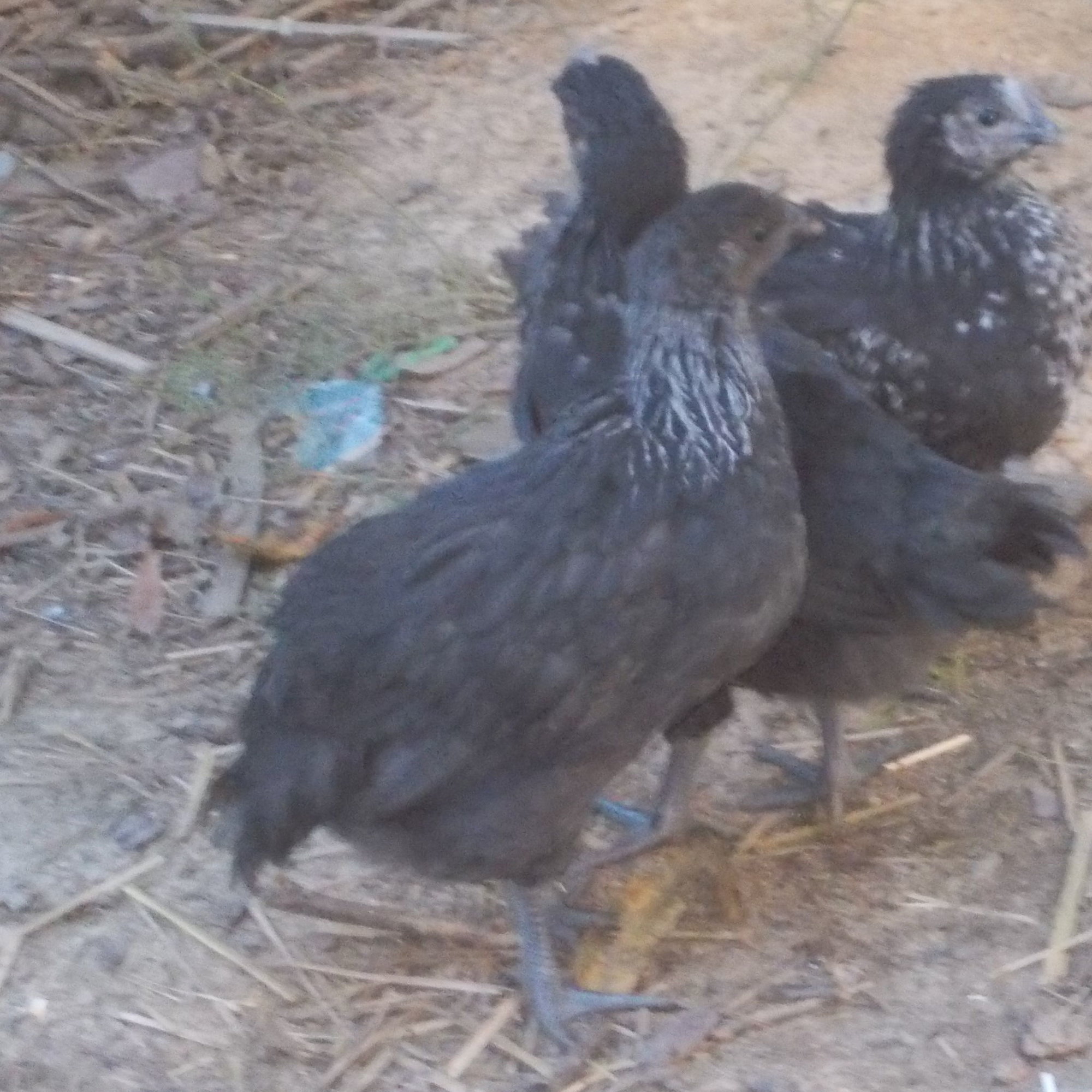 The Results after 6 weeks, 3 Black N Meaties as I like to call them 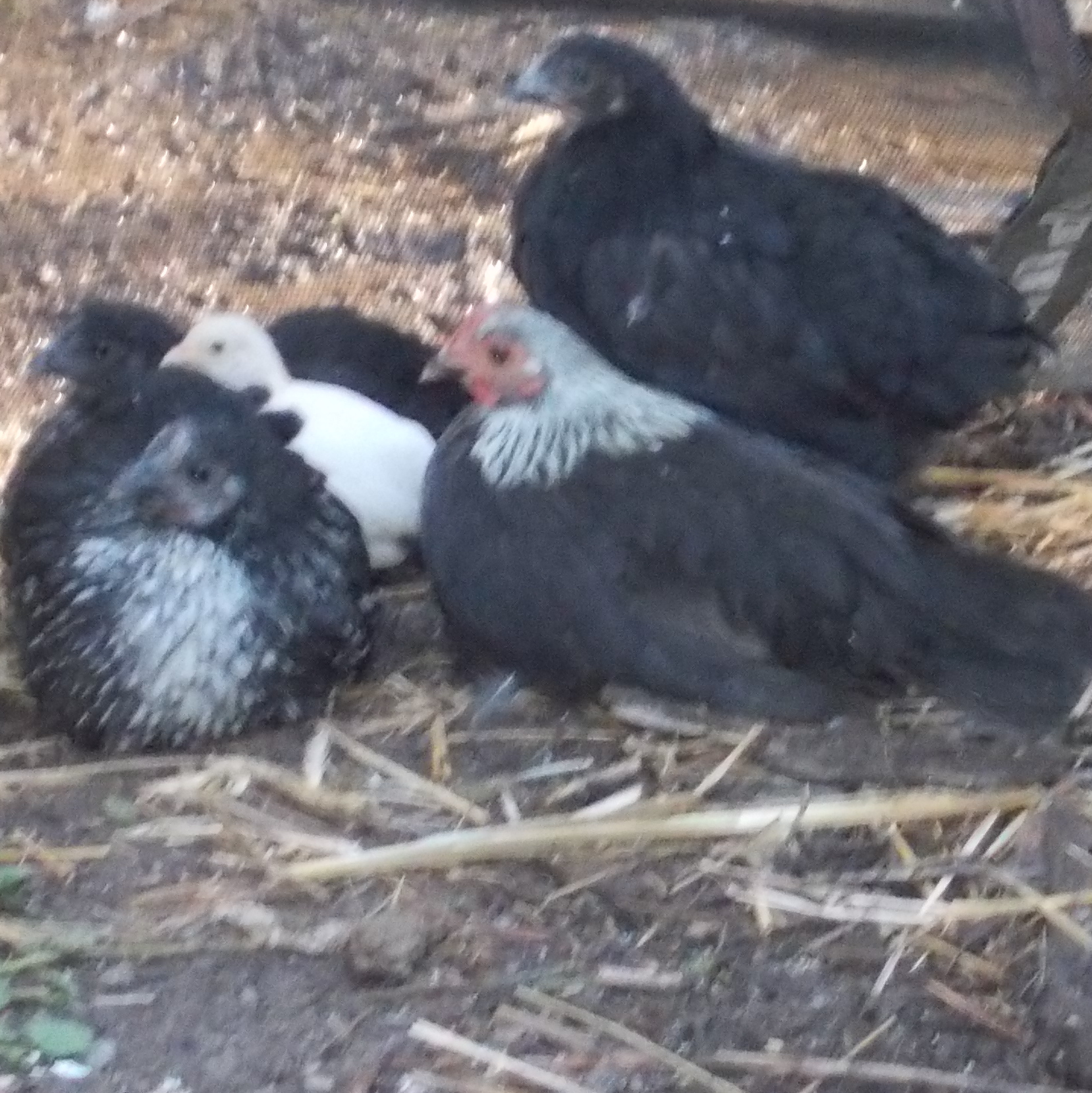 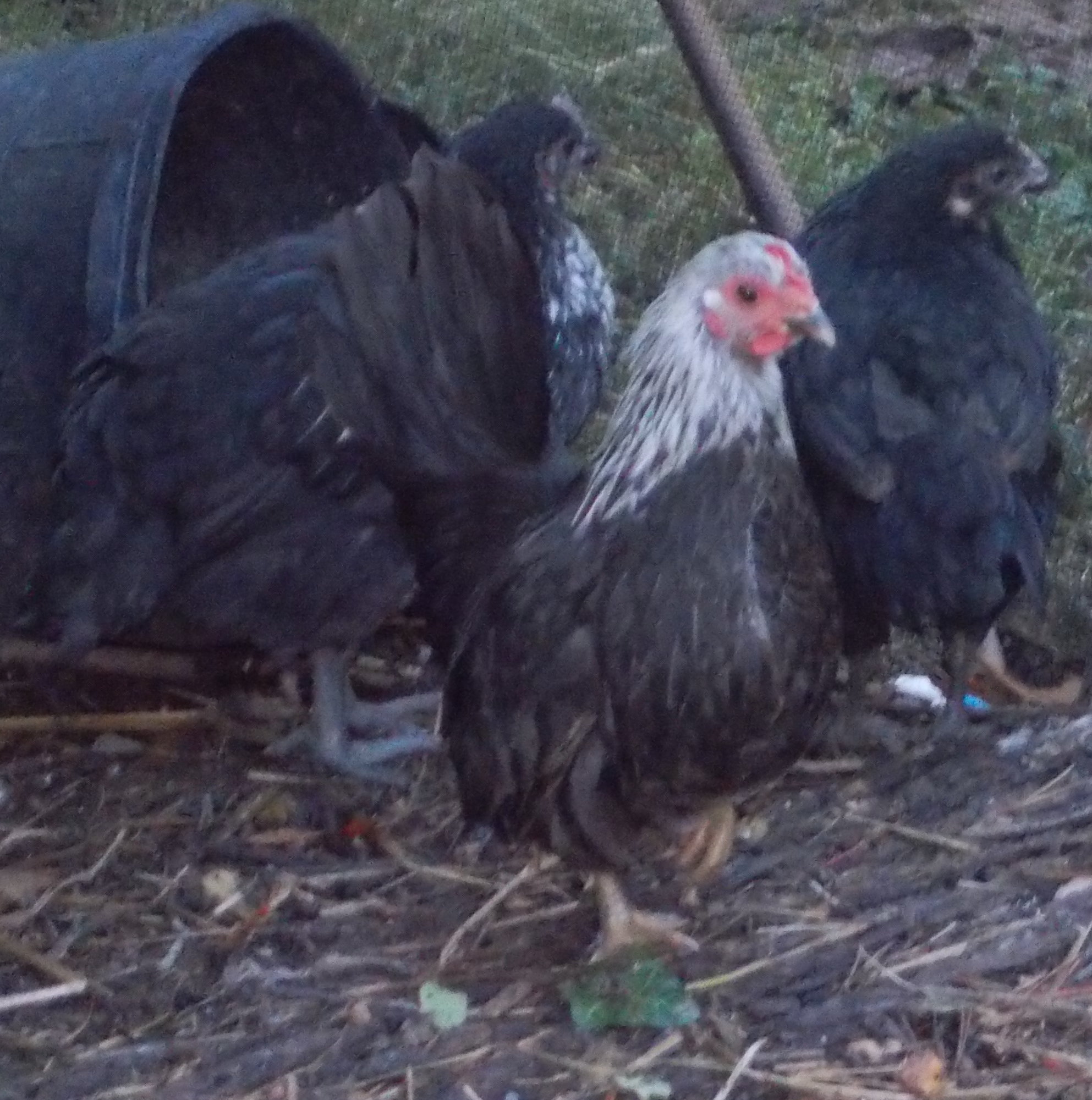 I also had some under a Broody Japanese Bantam and at 6 weeks they are larger than mama bird. Although there is also a Black Maran Sex Link in there too you can tell her by the leg color in the 2nd photo. She is the one standing up in the first photo of the Brood. 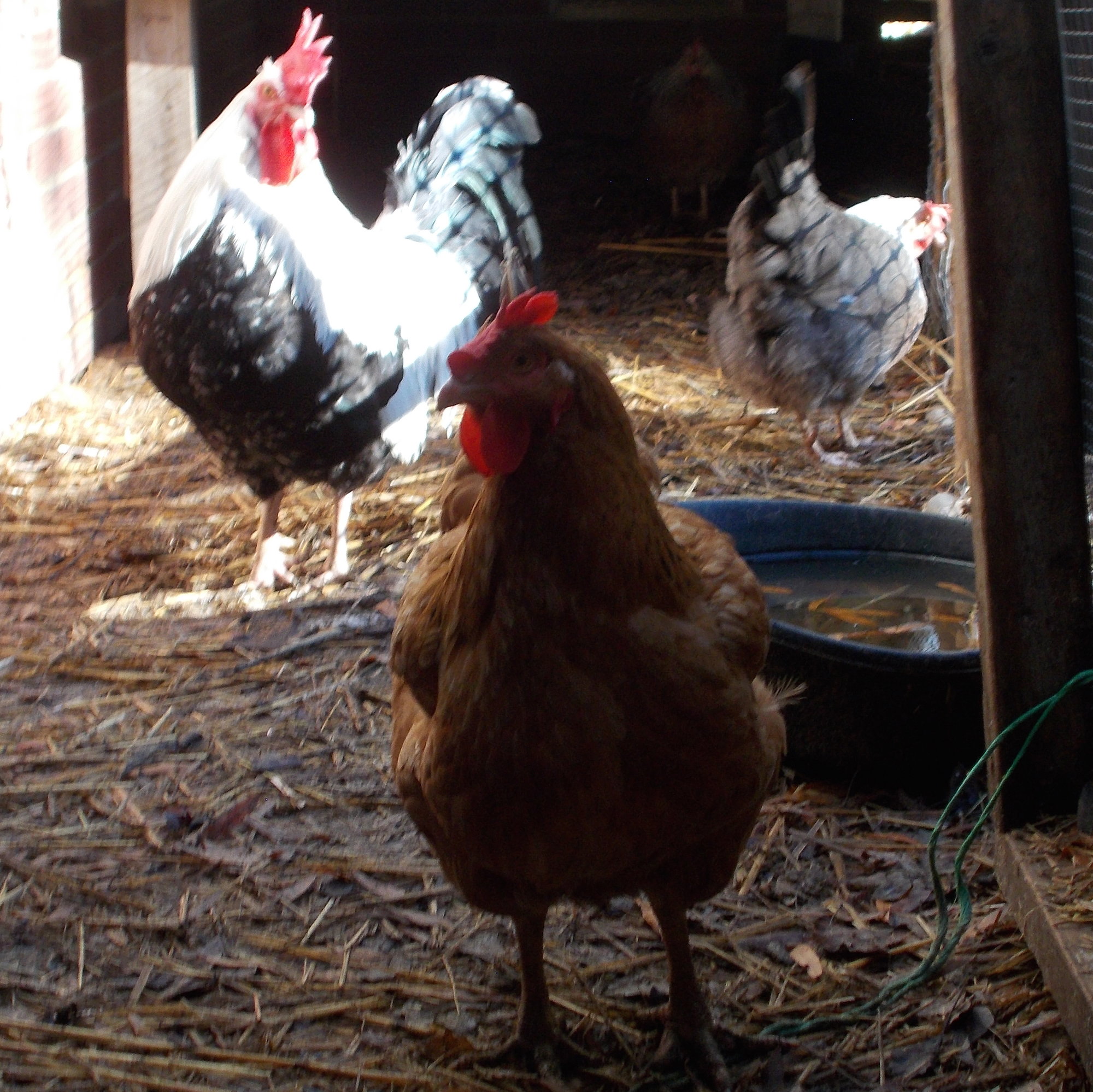 The Next Set of Parents. Dorking x Red Ranger 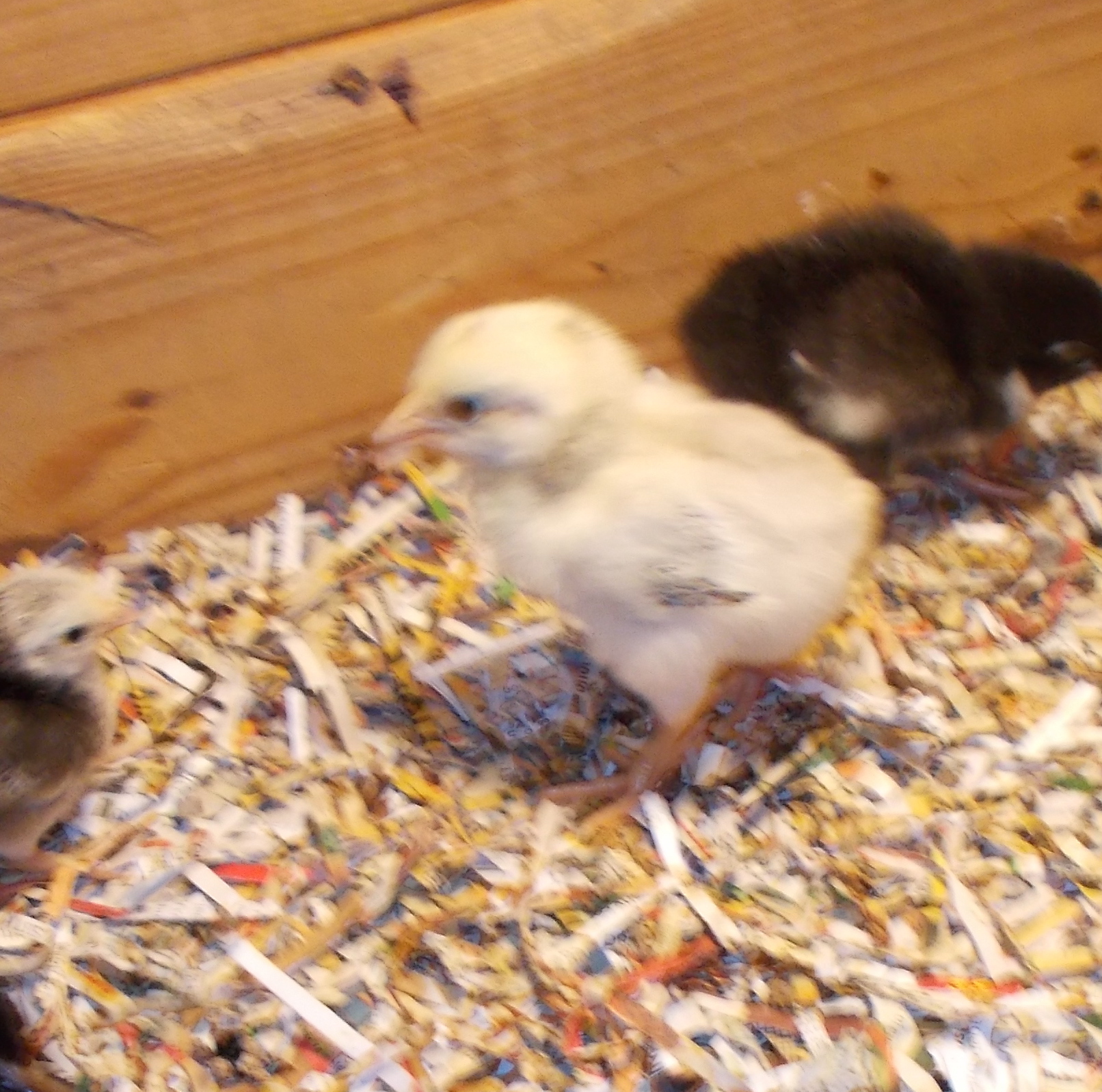 Still in the Brooder about day 3. I have no idea how that one will turn out but I might be breeding him/her back to the Dorkings if It looks like the offspring have a chance of being Columbian patterned. I want to make my own Breed of Columbian Dorkings that I can make sex links with using a New Hampshire Red male in the distant Future.
Last edited: Nov 16, 2018

I love hearing about these kind of projects. I'm thinking about getting Red Rangers next year with the thought of keeping a couple to cross with a Marans. Please keep us updated with how their grow-out weight go.
Last edited: Nov 18, 2018

Maybe I will cross a red ranger with my Black Copper Maran Rooster next time I rotate the breeding. its about a 50/50 chance I do that and if I do I will let you know the results. My Marans do no feel very meaty but they do have a decent frame. I also have a Black Sex or 2 from my Maran Black Sex Links that is full Maran but half cuckoo half BCM I could cross with them. I imagine the Maran Black Sex Link male might be better due to hybrid vigor even though he is fully Maran.

Sex Link Issues! (male in front, female in the back) 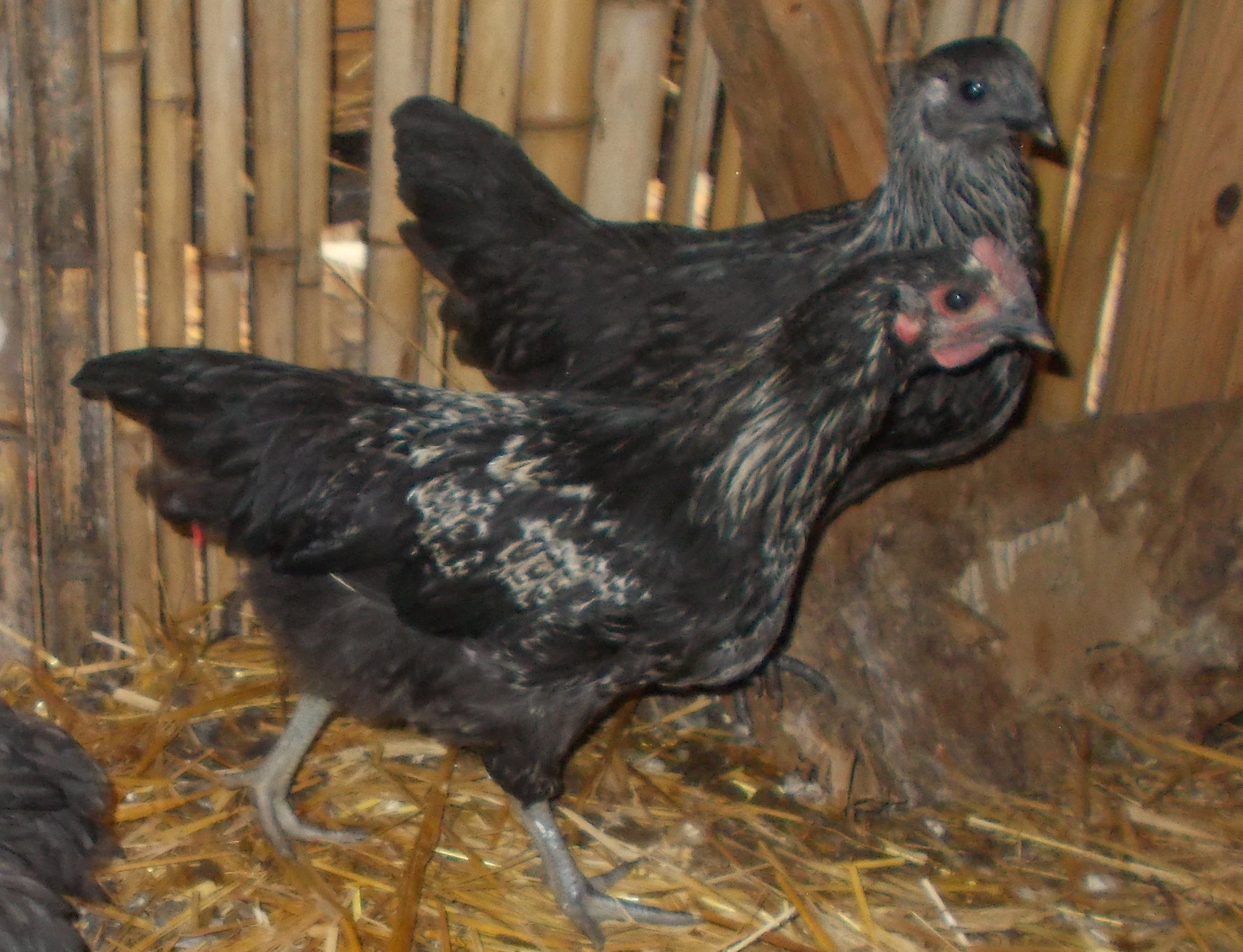 At 10 weeks the Ayam Cemani X Red Rangers are not exactly impressive in size but they are now larger than their 14 week old coop mates that are Asia Blacks, Bared Rocks, and Easter Eggers (TSC quality). The Red Ranger (mother) seemed to reach butchering size at 12 weeks. I suspect these guys will peak out at 16-20 weeks. I found that the black skin (as well as other Fibro characteristics) were passed on to to the female not the male. There is much more red feathering showing up in the males than that picture indicates, the female has no red in her feathering. One female was a runt (not in the photo) and she is slowly starting to catch up. She also has very little white in her feathering and was left in the Ayam Cemani (same hatch) Brooder until I could figure which one was her, Eventually some white lacing in her feathers showed up and she started to get bigger much faster than the rest of her old flock of Ayam Cemanis.
While they will be at the feeder more often than normal large fowl birds in their coop they still get out and forage for most of the day. The Red Ranger mother were the same way so no shock.
I am not sure where I am going to go with this black meat bird project but it looks like I will be needing to breed a female back to the Ayam Cemani father to get males to also have black meat. I have a few plans but I have to do research on genetics and hybrid vigor. I have a few months before the largest female reaches breeding age to figure out where to go from here. The males have 6 to 10 weeks before someone gets to give them the a taste test. And the Runt Female.... Not sure what to do with her. of course I will wait it out until about 18 weeks and measure the 2 females up. The largest female from that will go into the next phase of my breeding program.

I do not have a picture right now but the Dorking x Red Ranger is starting to feather up and is the largest of his/her brooder mates @ 3 weeks. I suspect it's a female but not sure. The Dorkings are hefty meaty short birds but as chicks they were no larger than other breeds. Its good to see this hybrid size up and feather up quickly. I only have one chick but the next hatch will have more of them. This one looks promising as a decent meat bird.

Looking good and thanks for the update. I'm planning on getting some Red Rangers next year for my own project. The first group will be a BCM cross, but I am very interested in your dorking/RR cross.

Where did you get your dorkings from? Are they hatchery or breeder stock?

I got lucky and found a decent breeder on craigslist. I had bought hatchery Silver Grey Dorkings and they had no vigor, were small, and eventually just died. I am guessing that hatcheries are great with production type breeds but if you get rare breeds they aren't very hardy. That has been my experience anyways.

Compost King said:
I got lucky and found a decent breeder on craigslist. I had bought hatchery Silver Grey Dorkings and they had no vigor, were small, and eventually just died. I am guessing that hatcheries are great with production type breeds but if you get rare breeds they aren't very hardy. That has been my experience anyways.
Click to expand...

I got a couple of dorkings from My Pet Chicken this year -- both male. At 14 weeks they dressed out at 2 1/2 and 3 1/3 pounds. Pretty small, and I've yet to try eating them. I wanted to let them go longer, but they were harassing the hens, and I didn't have a grow out area built yet. If I like the way they eat, I was going to start looking into eggs from a breeder. 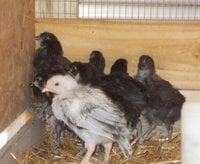 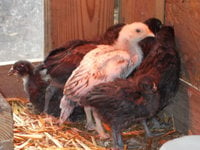 Pictures of the Silver Grey Dorking x Red Ranger. Only one hatched but I didn't have many to start with. The other Chickens are Maran Black Sex Links (BCM x Cuckoo). He is a bit bigger and his legs are thicker. Not the best pictures but they are in the giant brooder where catching them requires a long handled fishing net. On hatching day he/she didn't seem much bigger but at 3 weeks I am starting to see a size difference. I am starting to suspect its a female but too early to know. I am starting to get a good feeling about this Hybrid.

That's a good looking bird. Those legs are huge! Please keep us updated as she/he gets bigger.

(Ayam Cemani x Red Roosters 8.5 weeks old) I was able to snag a picture of the 2 meat birds that were hatched by a broody. Mama Bird (Japanese Bantam closest to the middle of the picture) is less than half their size now, you can see one of her other chicks (bantam) weeding the Nursery plants over on the right. These birds mostly free range but they have a tiny feeder in their coop that I rarely fill. These are very elusive birds because the mama is the most skittish bird I have. When she sees me with a camera she goes into hiding and the brood follows. I had to sneak up on them feeding off a horse manure pile. They have a non meat bird large fowl in the brood but I can't seem to get a good picture of the bird next to the meat birds to see the size comparison. Although I am not all that impressed with the size of the Ayam x Red Ranger in general I am impressed with how big they have gotten on such little feed. With a broody hen leading the way they seem to an economical table bird. Between these 2 in the picture and the 4 I hatched myself, I noticed that they have later growth spurt. Most of their size was but on between weeks 5 and 8. The first 4 weeks they were not much bigger than the other large fowl their ages. I haven't been able to hold one from the broody mama to feel how heavy they are. She hates having her brood disturbed. Its the final weight that matters anyways.

I do not have a picture but I am starting to see that the Dorking X Red Ranger is pulling away from the pack in the brooder. He is a little over 3 weeks now. That one seems more promising as a decent meat bird.