My gander has blue eyes I should have named him Frank. I had 3 Muscovy all white with blue eyes they are gorgeous aren’t they such a pretty blue!!

Momplus1 said:
My goodness! Such beautiful babies. I am in love with mama Aspen. She is absolutely stunning! I need to add some of these to my flock ASAP. My Pekin and Jumbo Pekins have blue eyes and I love it! I know it's normal with Pekins but I still find it heart warming to look into those blue eyes. I have enjoyed reading through this post
Click to expand...

Thank you! Sorry for not replying. Muscovies are wonderful and can have such pretty colors. I was bummed when I lost both my white baby and chocolate baby this clutch, but these two survivors make up for the loss in their great personalities. Blue eyes are gorgeous, and I was beyond thrilled when I realized a hen from Aspen's last clutch had blue eyes. I'm glad this big handsome boy has them, too--can't wait for him to grow up.

Miss Lydia said:
My gander has blue eyes I should have named him Frank. I had 3 Muscovy all white with blue eyes they are gorgeous aren’t they such a pretty blue!!
Click to expand...

They really are! And quite striking against those red carnuncles. Sorry for failing to update ya'll lately. I'll give some updated pictures tonight.

I'm sorry for not updating in a while...

Both duckies are doing good and now get to go free range with the other ducks, since I figured they were big enough that the hawks wouldn't bother them in the open area. I get hawks are still a problem, and I'm watchful, but oddly enough I've never had a hawk bother any adult duck in all my time owning them...Could be because the red shoulders we have are all mostly smaller than most of the 'scovies...

Anyways, here a few pictures from the other week, I'll get updated ones tomorrow. 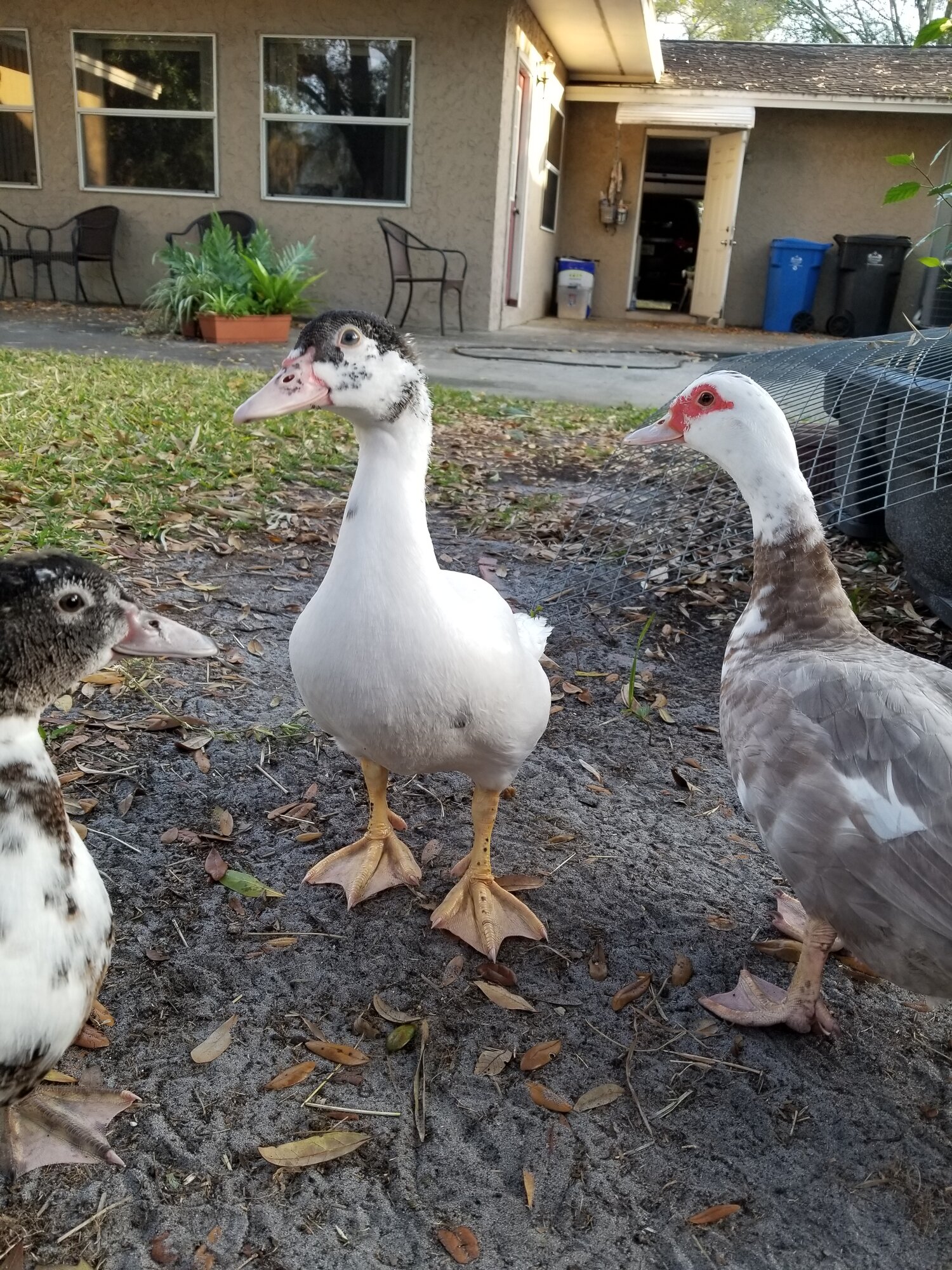 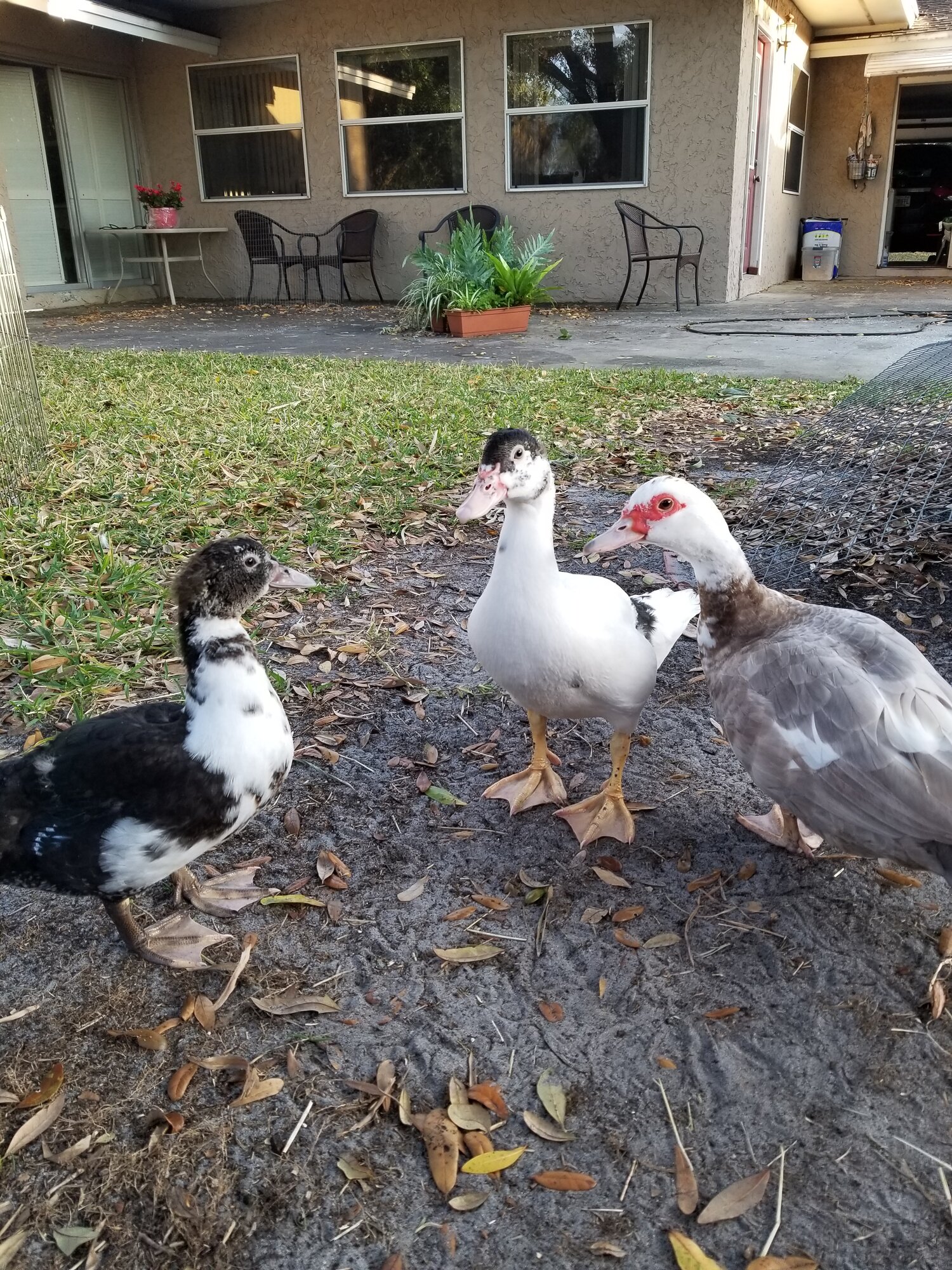 I also had a question concerning my hen, Aspen their mama. She is already laying eggs again and I believe she is already sitting on a nest, mostly because she hardly comes around anymore. She is laying in a spot I can't reach, but I don't want her hatching out another clutch.

Now, I don't coop my ducks, and I understand that isn't the smartest choice, but it is the unfortunate situation I am in, and I ask that everyone would respect that it is what it is. We live in a busy neighborhood with hardly any predators so I know what situation I am in and my ducks do perfectly fine. They are all Muscovies and can fly really well. (And I will make a pen for any injured ducks). So I'd ask that no one come at me for that. Thanks.

That out of the way, I built a makeshift pen for Aspen so she won't hatch the clutch, and my question was, how long will it take for the eggs to die off? I don't want to keep her cooped up forever, so I was just curious because I wasn't finding any answers off a google search.

I have eggs that were in the refrigerator that are working towards hatching that had been in there at least two weeks minimum. Is she sitting on them most of the day already? Or partially?

Knighstar679 said:
I have eggs that were in the refrigerator that are working towards hatching that had been in there at least two weeks minimum. Is she sitting on them most of the day already? Or partially?
Click to expand...

I feel like she's sitting all day. She'd usually come by a couple of times a day, but now she's coming by once, yesterday not at all.

Updated pictures, sorry for not posting in a while. Their wing feathers are totally in now, but they definitely have some more growing to do. Big boy here is about as big or bigger than my hens, and I'm certain now his sibling is a girl. 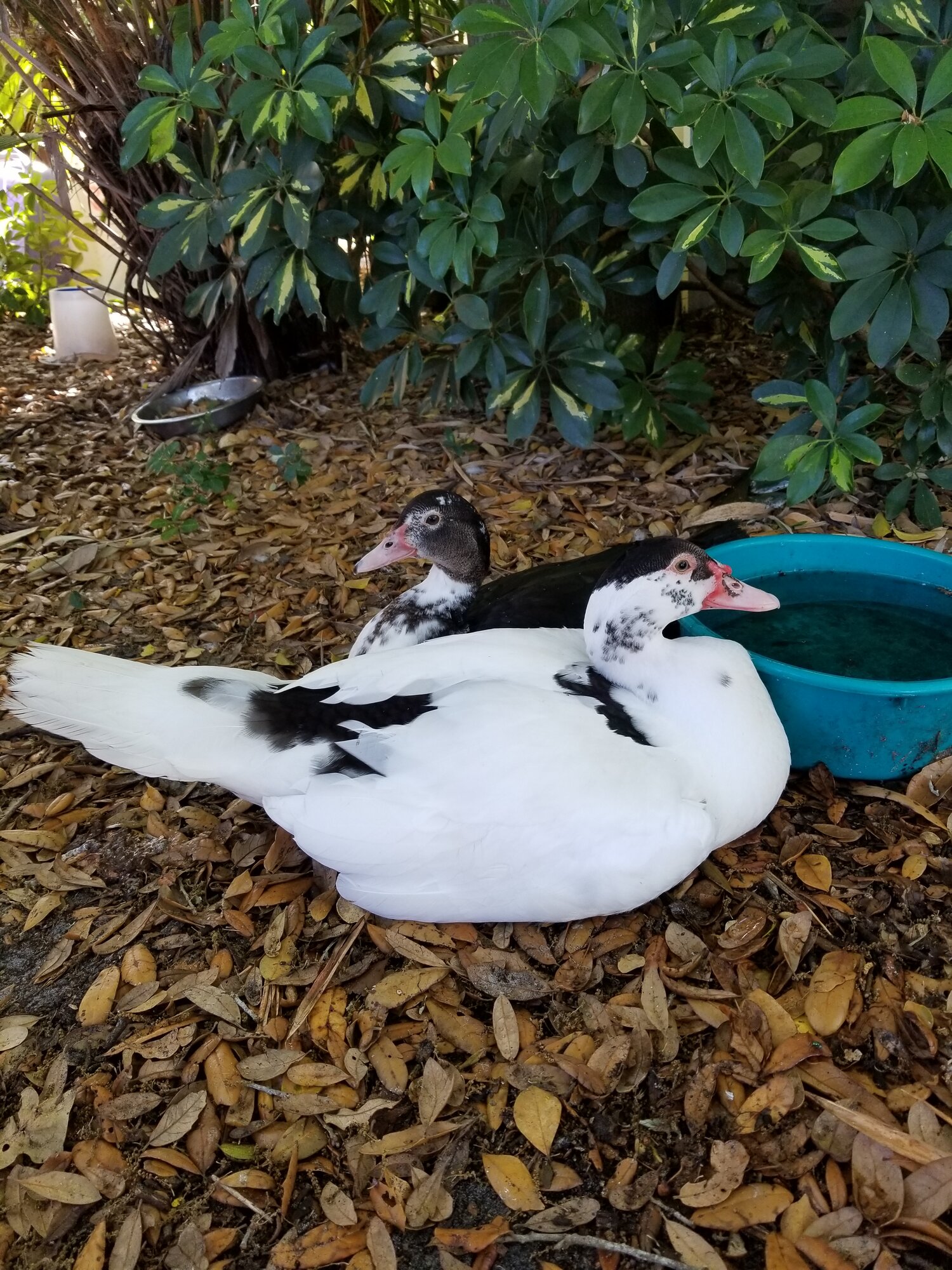 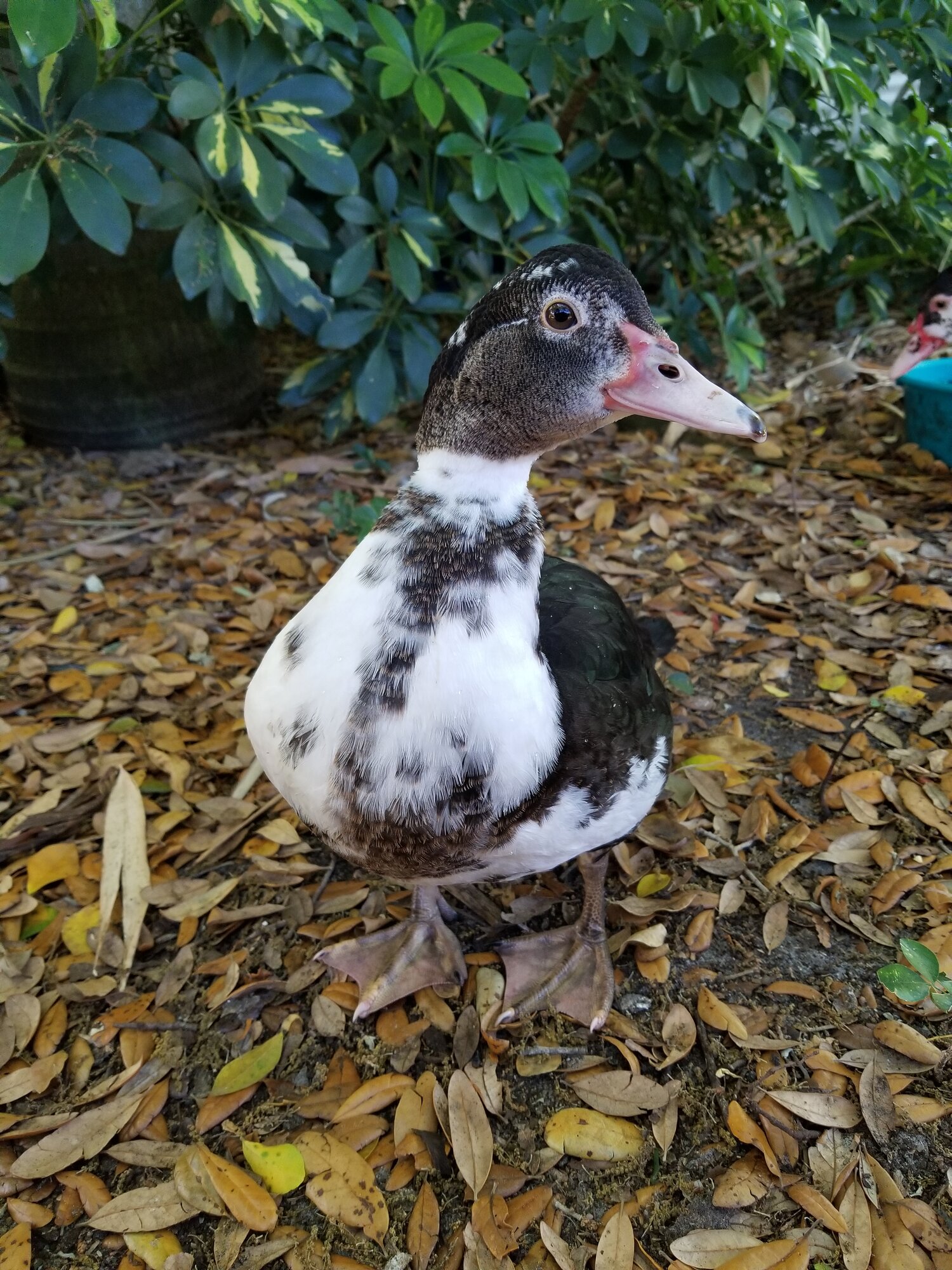 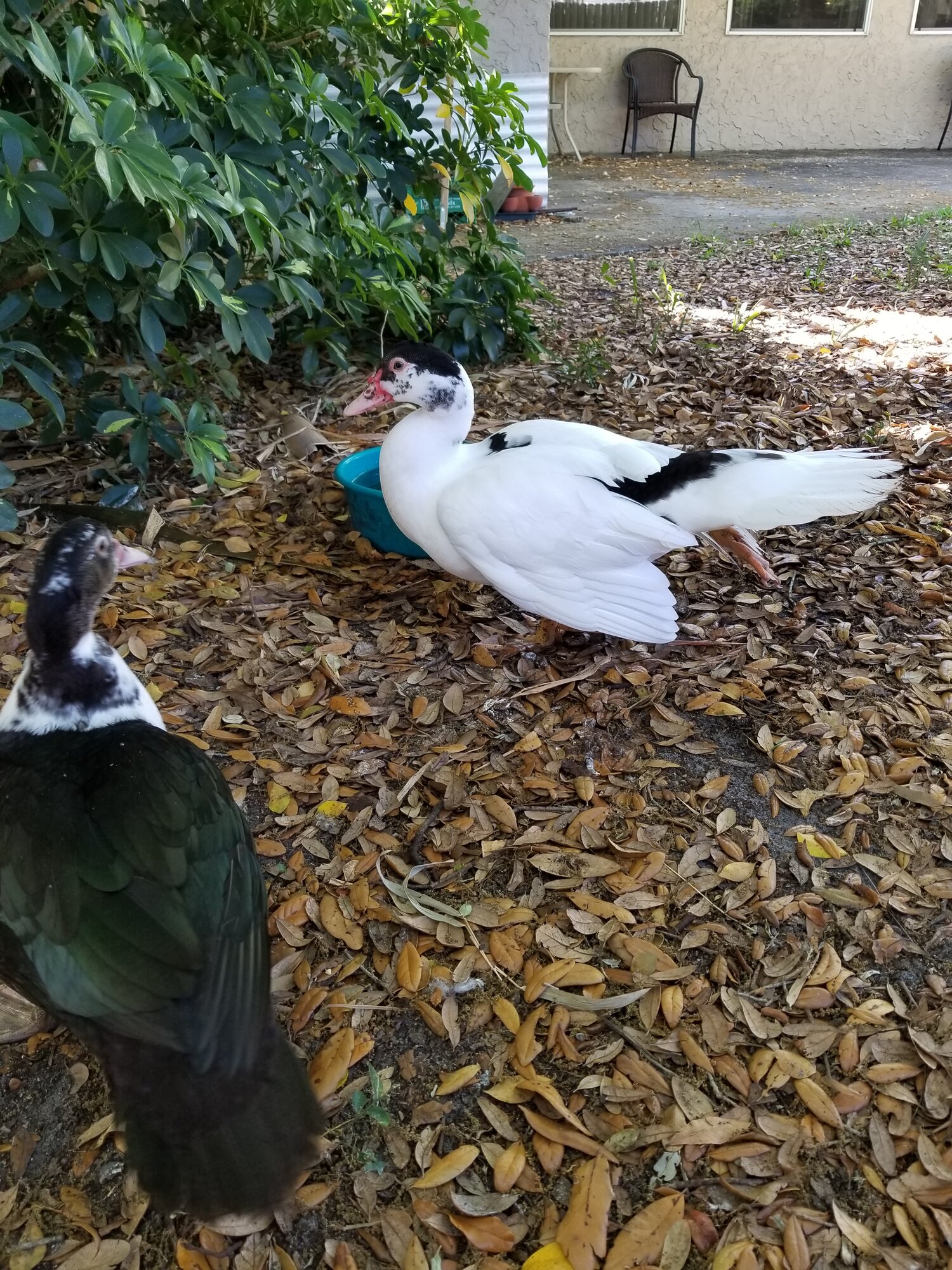 They're back in the backyard again because of an upsetting incident today. One of my drakes was killed this morning.

He wasn't necessarily a favorite of mine, but he was a funny drake that was always entertaining. I never named him but I liked to call him troublemaker because a while back in breeding season, I guess, he got pretty hormonal and would chase any girl he saw. He would always do this weird thing where he'd stick his beak in the air and shake his head, and he taught some of my other young drakes how to do that. He was always very talkative too. I'll miss him.

This may be a bit graphic for some of you, but when I went out there all I found was a wing and a foot and some bloody feathers. There was no body, but I was still able to tell which duck it was. Plus the drake is nowhere in sight. I'm a bit baffled as to what killed him and carried him off.

We do have red shouldered hawks, but most are smaller than or the size of my hens. I know there's one big one that I see every now and again, but even then that hawk wouldn't have been able to carry a big drake like this. I doubt it's a raccoon, since they usually leave a body too. Perhaps it got dragged, but I don't know. We have no other predators other than those I mentioned in the area we live in.
The other thing my mom and I were speculating was that it could have been an eagle. A few weeks ago, I went out back and thought I saw a hawk in a nearby tree. By the time I walked over to scare it off, it was already flying away, but I realized it was way too big and not the right shape or color to be hawk. I figured it was probably a juvenile bald eagle. It's very rare to see an eagle where we live, but we have actually heard and seen one before at a distance in the air. And from my research, that's the most plausible bird it could have been.

Do you guys think it's possible it could have been an eagle? Or maybe even the same one? I haven't seen it since so I kind of doubt that, but honestly I have no idea. I'm worried it might be back for more of my birds, whatever it is. If it can kill a big drake it can kill any of my ducks.

This was 'troublemaker' my drake: 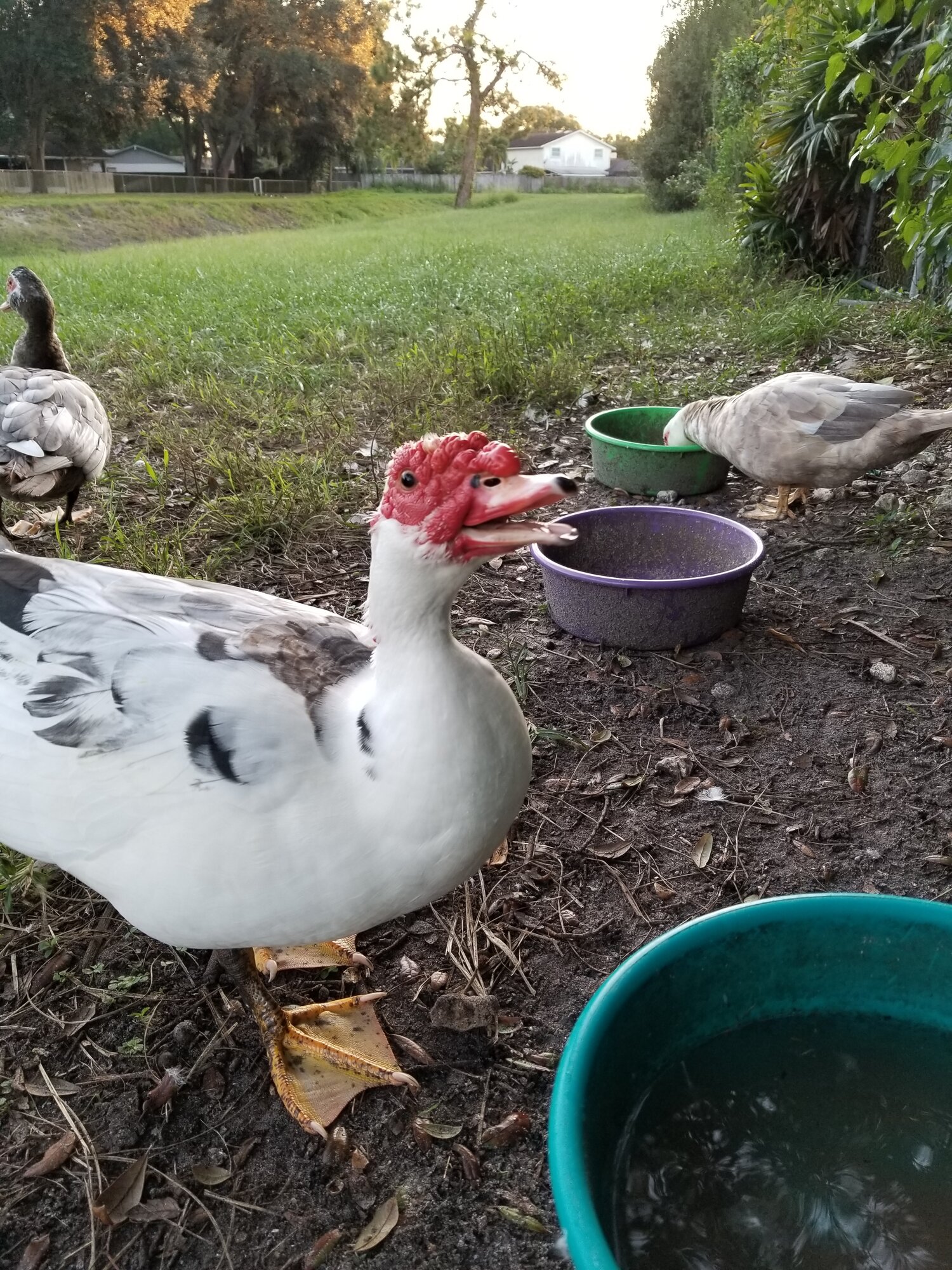 Skye'sDucks said:
My muscovy duck has three babies, and by now they're 2 weeks old, probably closer to 3. One of them is twice the size of the other two, I mean, it's very visible difference. I know at this age, you can't say for certain what gender your duck is until they get older and start developing traits that we know as drake or hen. I get that sometimes, you think one is male or female, but then they surprise you. But with this little guy SO big, I wasn't sure if it was possible to be sure if it will definitely be a drake, or if there's still a high chance it's just a fast-growing hen.

What are people's thoughts and experiences? I'm still fairly new to ducks, this starting my third year with them, and I'm very curious about this topic seeing I'm experiencing it. Thanks to anyone who replies!

Sorry if it's hard to tell from my pictures.

they sure are cute.

donkeydew2farms said:
they sure are cute.
Click to expand...

Very sorry for your loss