I thought I would share an old story with all of you who love your duckies! When I was a child living in Australia (my family immigrated from Pennsylvania) in 1961, my grandmother gave me a baby duck for Easter. I loved him dearly and trained him to pull a makeshift box like a wagon. He was so smart and trained that a next door neighbor who was a well know horse trainer called some people he knew at the Telegraph newspaper in Brisbane and had them come out and look. Neverthless, he had two sets of pictures on the 2nd page of that big newspaper! In time, a television show called ,"I've Got a Secret" called me to bring him on. Australia had their Aussie version of the American show, I've Got a secret. He was also school mascot. etc. We had to leave Australia to come back in 1968. I was very happy to come home to the United States but sad that I had to leave him. Luckily, I had a very lovely girlfriend who wanted him very badly and she loved him, so, he got a great home with lots of attention like he was used to. I am posting a couple pictures for you to see, they are old pictures of course. He was a Mascove duck. He was also a watch duck like a goose and if any strangers come into the yard, he would go after them. The Avon Lady was scared to death of him! I had to show her that he was very friendly actually and even though he was putting his head down with his feather straight up on top of his head and running after her with his head down low like a goose, that, if she would stop and not run and reach out to pet him, he would start to wag his tail at her!
This is the picture that the Australian version of Woman's Day took of him. They come out to the house too. 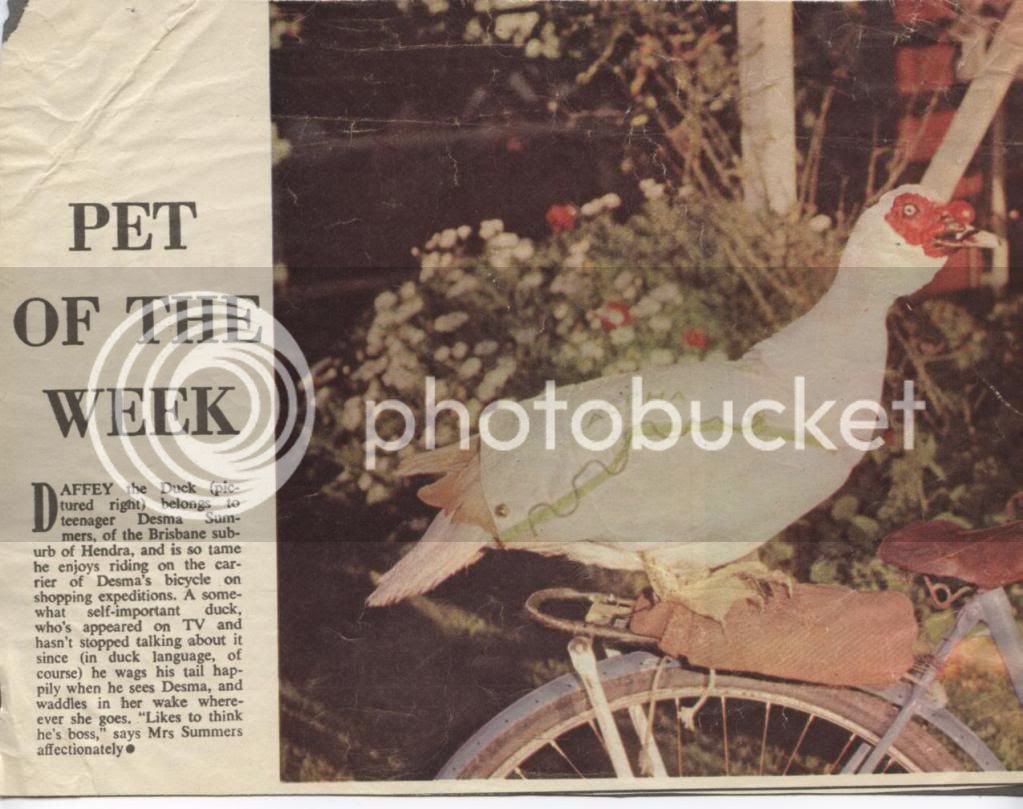 I AM TEN YEARS OLD HERE. DAFFEY IS ONLY ABOUT 6 MONTHS OLD. I MADE A MAKESHIFT WAGON OUT OF CARD BOARD BOXES AND HE WOULD PULL THEM AROUND FOR ME WHEREVER I WANTED HIM TOO. 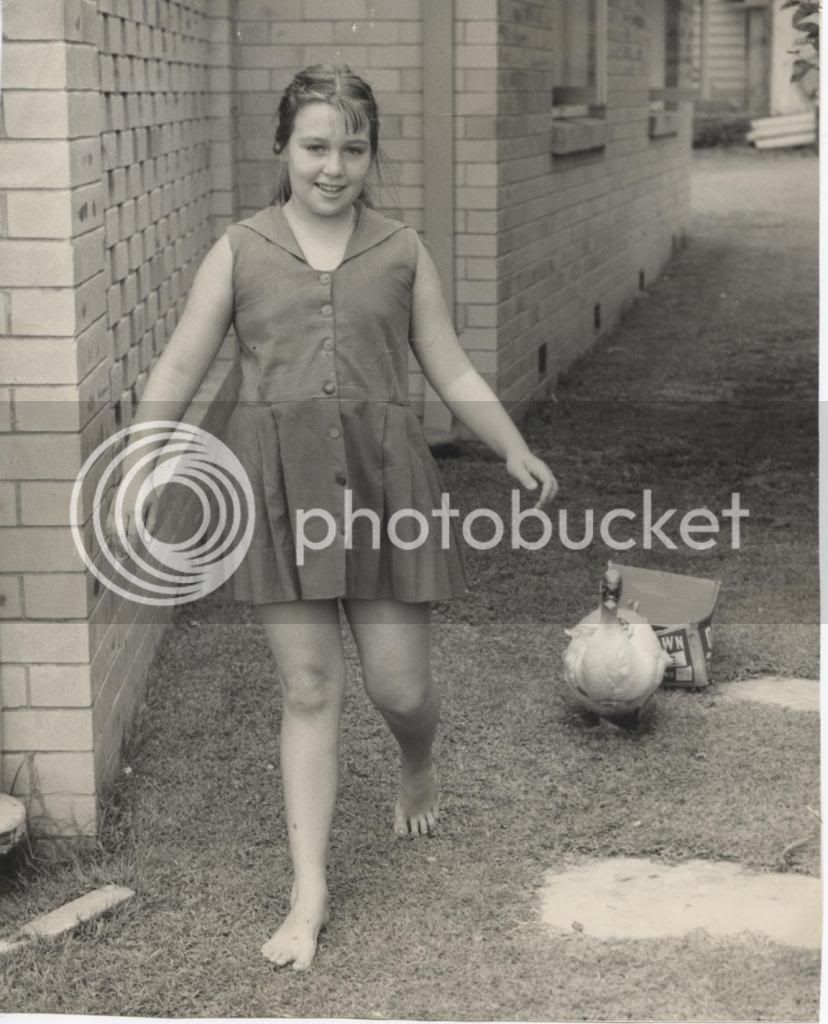 That is cute, and it must have been so exciting for you!

What a cute story.

Thanks so much for sharing that with us.

That's a cute story. How did you train Daffey to pull the box?

GREAT STORY!!!!!! I bet those are just wonderful memories! You're a beautiful girl ! I know you will always cherish those pics and memories.

I got him to pull a box like a wagon very easily. Since he followed me around constantly, I just attached it to him by making ducky tack and he pulled it for me with no problem. It was like he did it instantly. He just did what I wanted him to do. I would play hide and seek with him too. I would run away from him and even climb up on the roof when he didn't see me go up there and he would stand down below with his head turned to its side looking up at me with one eye going "haaah haaaah haaaah haaaah haahhh! I also played "crack the whip" with him. I tied a rope to my bike with a burlap sack attached at the end and he could hold on easy because of his sharp claws. I would ride really fast and he would hold on keeping his balance by flapping his wings. Seeing him make sharp turns and holding on was a real hoot! He must have loved it because he never wanted to get off the sack. He also knew how to climb the stairs. In Australia, we had a lovely big old home that was built up on stilt and to get to the kitchen and the rest of the home, you had to go up the stairs. He could get up the stairs and go right inside if he wanted to. 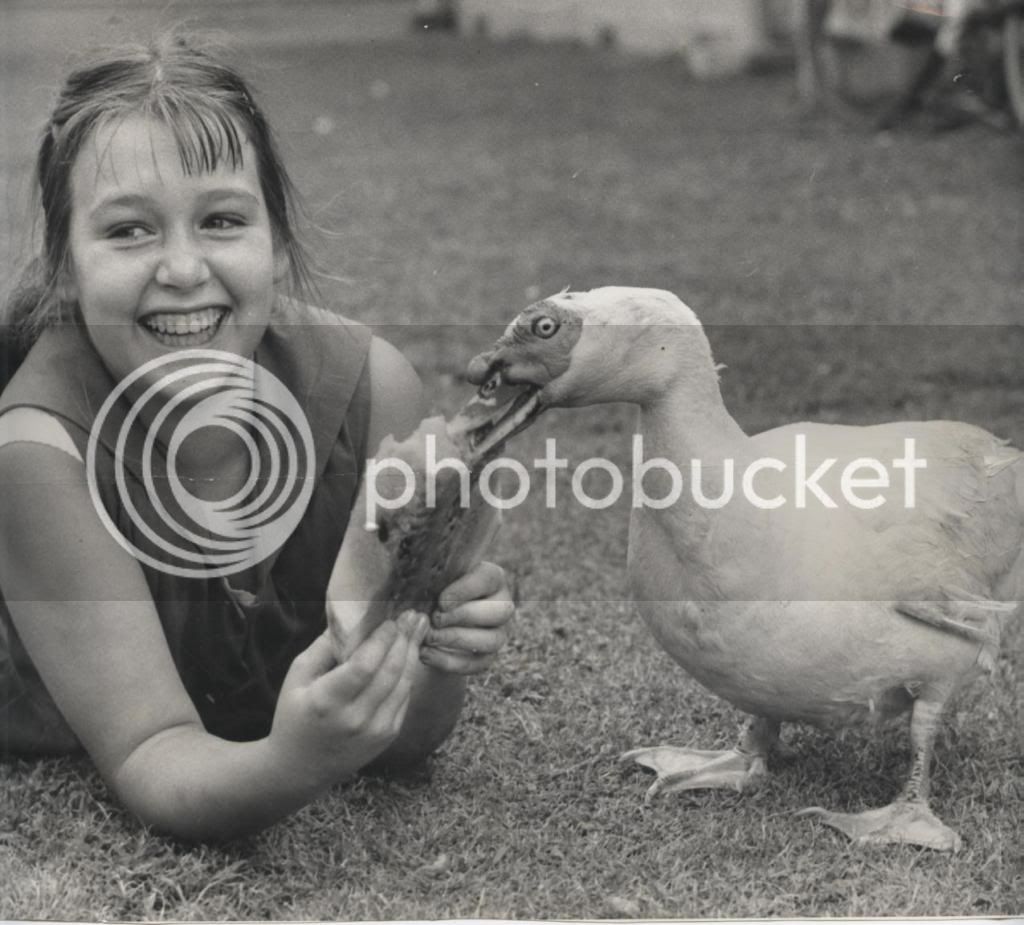 Such awesome pictures of an awesome duck!

What wonderful memories you have!

My male duck Spencer got his head and neck coiled around fencing.
2

My male duck Spencer got his head and neck coiled around fencing.