Being rather new at hatching eggs, I've just had an experience that I haven't found any info about on BYC. Is it possible for FERTILE eggs, upon candling at day 6, to have no embryonic development and no veins/blood vessels? The yolk themselves are intact, as I opened them to check them out on day 7. They look like a perfectly normal egg on the inside, no blood rings, nothing abnormal...they look just like an egg that you crack open to cook. These eggs were shipped to me. I have had "scrambled eggs" that I've cracked open to find the egg yolk busted. But these eggs are completely normal...just no signs of development.

These eggs were in an incubator with some Delaware eggs. I moved the Delaware eggs to a hatcher, where 3 of 4 hatched last Monday. So it's not the incubator settings. Please help me figure this out!

Probably just not fertile. Did you notice any sort of bullseye on the yolk? That is a sign of fertility. No bullseye, no chickie.

Sorry about your eggs -

Then they weren't fertile to begin with..... what you have there is a "clear" egg. No fertilization. Dont feel bad, I just threw out 27 "clear" eggs.
S

Quote:Nope, no bullseye in any of the eggs. But the person I got them from doesn't think it possible that these eggs are infertile. I'm just trying to clarify what's wrong with the eggs, because I know it's not how they've been incubated or handled. But regardless, by day 7, IF the eggs are fertile, there absolutely should be veins and an embryo, correct?
Last edited: Oct 17, 2008

On occasion, an egg will be missed on the "Fertility Conveyor Belt". It's either that or shipping damaged it enough so that development was stopped at the outset. And I even have another weird situation. After sending out my Lt. Brahma's eggs when she was in the pen with Suede to several people, they werent developing, even though I clearly had seen bullseyes in all I cracked open before that. The Buff Brahma's almost always developed, so I decided to incubate her eggs here just to see what was wrong. NONE would ever develop. I tried two different batches. Seems there is something genetically wrong with Miranda and her eggs, though fertile, just will not develop.

If she says they are fertile, could be something changed. My Delilah, who has been in with Suede for months, is no longer fertile. Could be all that fluff I trimmed has regrown or something is different about Suede's preferences now. Who knows? No more bullseyes, whereas previously, people have hatched her eggs. (doesn't matter, I'm taking her out of the breeding pen anyway)
Last edited: Oct 17, 2008

That happened to me as well I bought 24 EE eggs that were suppost to be fertile but not one f them was... She had maybe 3 roos in there. I don't see how they couldn't be, but they wern't. I just happens I guess.

Quote:Nope, no bullseye in any of the eggs. But the person I got them from doesn't think it possible that these eggs are infertile. I'm just trying to clarify what's wrong with the eggs, because I know it's not how they've been incubated or handled. But regardless, by day 7, IF the eggs are fertile, there absolutely should be veins and an embryo, correct? 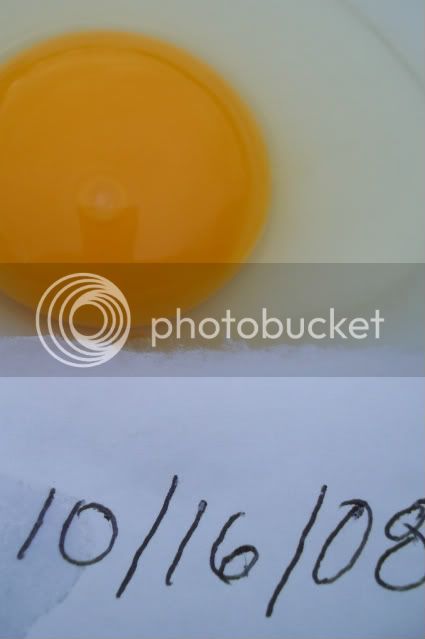 That's exactly what I was looking for, but didn't find, in any of the eggs. I'm going to upload some pics and see if anyone finds what I'm apparently missing.

an if it were infertile you would still see a white circle just with no ring....

I just tossed out 26 Guinea eggs from a swap on here none fertile either. No devlopement. I feel your pain .
You must log in or register to reply here.
Share:
Reddit Pinterest Tumblr WhatsApp Email Link