Do certain breeds just naturally have different personalities? I have 3 different breeds & I've noticed they all have different personality traits especially when it comes to being handled.
My colorpack doesn't like being picked up but won't actively fight you (just run off & make you chase them). If you create a little hand cave they will gladly cuddle up inside, enjoying the extra warmth, & doze off.
My amberlink also doesn't like being picked up & wants nothing to do with the hand cave but if you hold still they will explore you & the surrounding area peacefully.
My dominate copper wants nothing to do with being picked up, they'll run & peck you to get left alone. They want nothing to do with being near us & will constantly try to run off.

I try not to over handle them, but I want them to be comfortable around my & my daughter (who isn't actually allowed to handle them as she is 2). But I do wonder if the coppers will always be so easily spooked & if handling them is moot point?

Lucy cuddled up in her hand cave 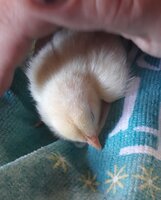 Well, there are some supposed personality differences based on breed- but really at the end of the day chickens are just like any other animal or human- we're all different regardless of our "breed".

Dogs have some very clear characteristics between the breeds though, for instance we all just know the difference between a Doberman and a Dachshund. I would say the chicken differences between breeds are not that pronounced.

At the end of the day though I can tell you with 100% certainty that different chickens have very, very different personalities- and that yes, I have seen some traits between breeds that stick. I'm sure may will have examples.

Moving Out with Different Ages!

How do I create a lap chicken?