Don't Laugh Too Hard: Converting an old she into a coop

I use to have backyard chickens and found BYC to be extremely helpful. In January I moved in with my best friend, her fiancé, and her sister. Her sister had four hens (3 RIR, and 1 BR) and a rooter that I think was a mutt. They already had a coop and run set up (much to be desired) so I kept my mouth shut since they weren't my animals.


In the spring we picked up 10 Leghorn chicks, 6 Peking ducks, and 6 Chinese geese. The additions were mostly grow outs to be food. Well, between the huskies (somehow some of the chicks got out, I'm still not sure how), and the hens pecking some of the Leghorns to death, we are down to one Leghorn.


Then we learned we were moving! Into a house with a nice big yard and an old shed that could be converted into a coop. I had always wanted Wyandottes, so my best friend said I could get a couple since we were going to have more room. I ordered 10. Five died within the first 48 hours of their arrival even in a nice brooder setup. One was a victim of the huskies. So I now have four Wyandottes and one Leghorn separated from the hens.


We are hoping to replace some of the RIRs with the remaining Leghorn and/or the Wyandottes. They are only a year old but I am the only one who really takes care of everything. So I would like to have the kind of chickens I want since I do all the work. We also kept a couple water fowl.


Well I had a lot of grand plans for our new coop. Nothing too fancy, because as much as I want to be handy, I'm not as handy as I would like to think. When I took my best friend out to show her my ideas she was upset that the part of the she I was planing for the birds was taking up too much of the shed. We plan on getting meat rabbits and had a different spot picked for them, but now she wants them in that shed as well. So I adjusted some of my plans and I think she is happier and we have come to a compromise. However now we will have to greatly cull down the numbers in our flock.


The tape measure is currently MIA, packed in a box somewhere. Once I can figure out the square footage I will know how many birds we get to keep. But this is where I need some help...


I know the coop has a few necessities. First being ventilation. There is one window in the shed that will be a big help with ventilation in the hot summer months. My other idea was to get vent covers (the kind used in a house) that open and close. That way in the cold winter when we are having a snow storm that is blowing snow, I can adjust which are open and which are closed. My plans was to cut an appropriate sized hole in the wall, attach some screen netting to help keep flies at bay, and screw the vent cover directly into the wall of the shed/coop. The shed is not currently insulated so I think this will work well. Would you suggest the vent covers be on the inside, or the outside of the shed?


The previous owner had two shelves on the end of the shed that will be used for the coop area. They are just two 2x4s with plyboard sitting on top. I took the lower plyboard off and I'm using it as a temporary barrier for the coop area so the girls have a safe place to be at night. They are using one of the 2X4s as a roost. My plan is to screw the plywood board into the studs of the shed, and add chicken wire, or wire mesh going up so the girls can't fly out. I want to remove the 2X4, cut it, and replace it wide side up so that it runs horizontally vs vertically to what will be the coop area. I will probably have to place two so that there is enough roost room. I also want to attach some kind of tray or something to catch their droppings to make it easier to clean. Does anyone have any great ideas for what to use a a poop tray?


Nest boxes are the next important part of their coop. I was planning on using kitty litter buckets. I'm trying to construct most of this out of items left at the house and things we have on hand. I'm not quite sure where I am going to put the nest boxes yet, I'm open to suggestions.


Of course they will need a door out to their run. We use an chain link dog run that is modified for the birds for protection. Unfortunately, we haven't been able to move the run yet, so I am having to move the birds twice a day into the shed and into a small section that was already fenced off. I know it is too small or the adult birds, so I'm keeping the water fowl in the main yard as much as possible so they can forage, and to give the hens a bit more room. The chicks are currently in a rabbit cage and are kept in the main yard during the day, and moved to the coop area at night. Once we have the run up I will section off a small area for them so the hens get use to them while they get bigger.


I would really appreciate any advice, or tidbits you have while I work on fixing up a new coop/run area. The run does have a net over it that provides shade and protection from hawks. I would like to cover the first couple of feet outside the coop with something to help protect against rain and snow. Also, although there is grass now, I know it won't be grassy for long. I would appreciate ideas on what to do to keep the mud down during rainy and snowy times. My best friend and I both breed rats, so I was mucking up the nasty mud and spreading some used rat bedding out at out old place. It helped dry up the muck, and gave the chickens something to dig through. This is still an option, but I would appreciate other ideas as well.


I do realize their current situation isn't ideal, and I am trying to rectify the situation as quickly as possible. I'm open to constructive criticism, but please at least make it constructive.


Here are some pictures of what I'm working with... 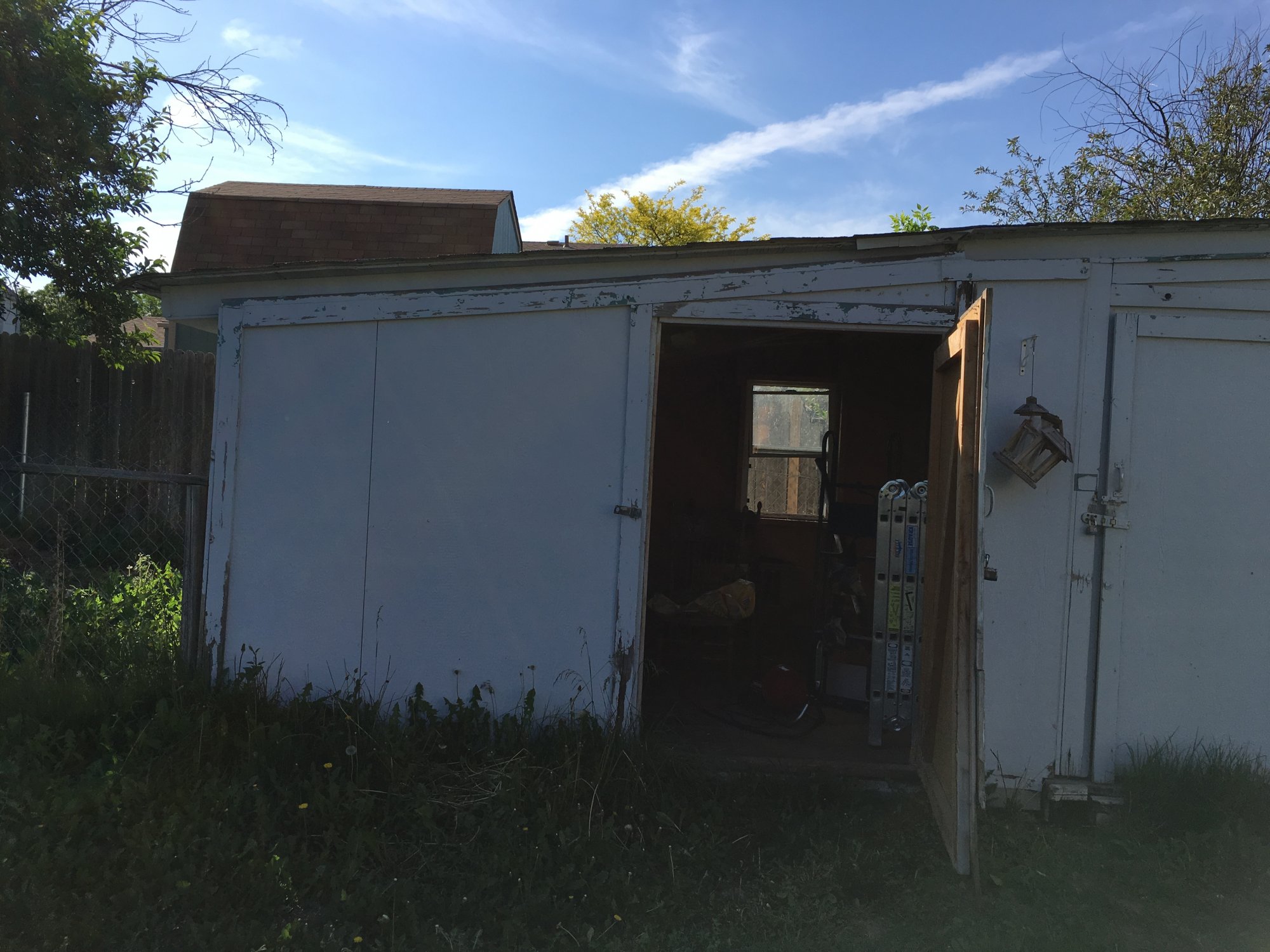 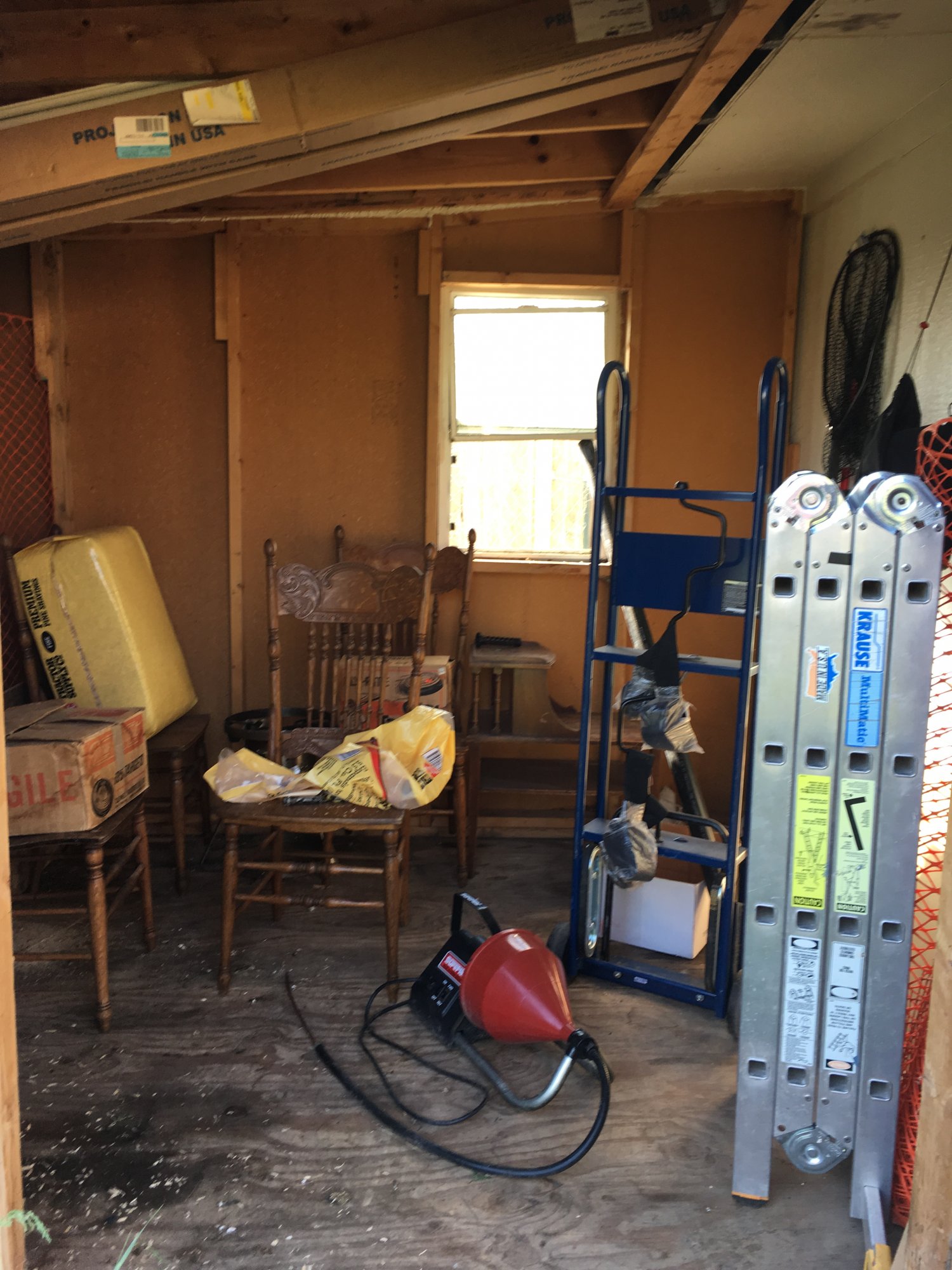 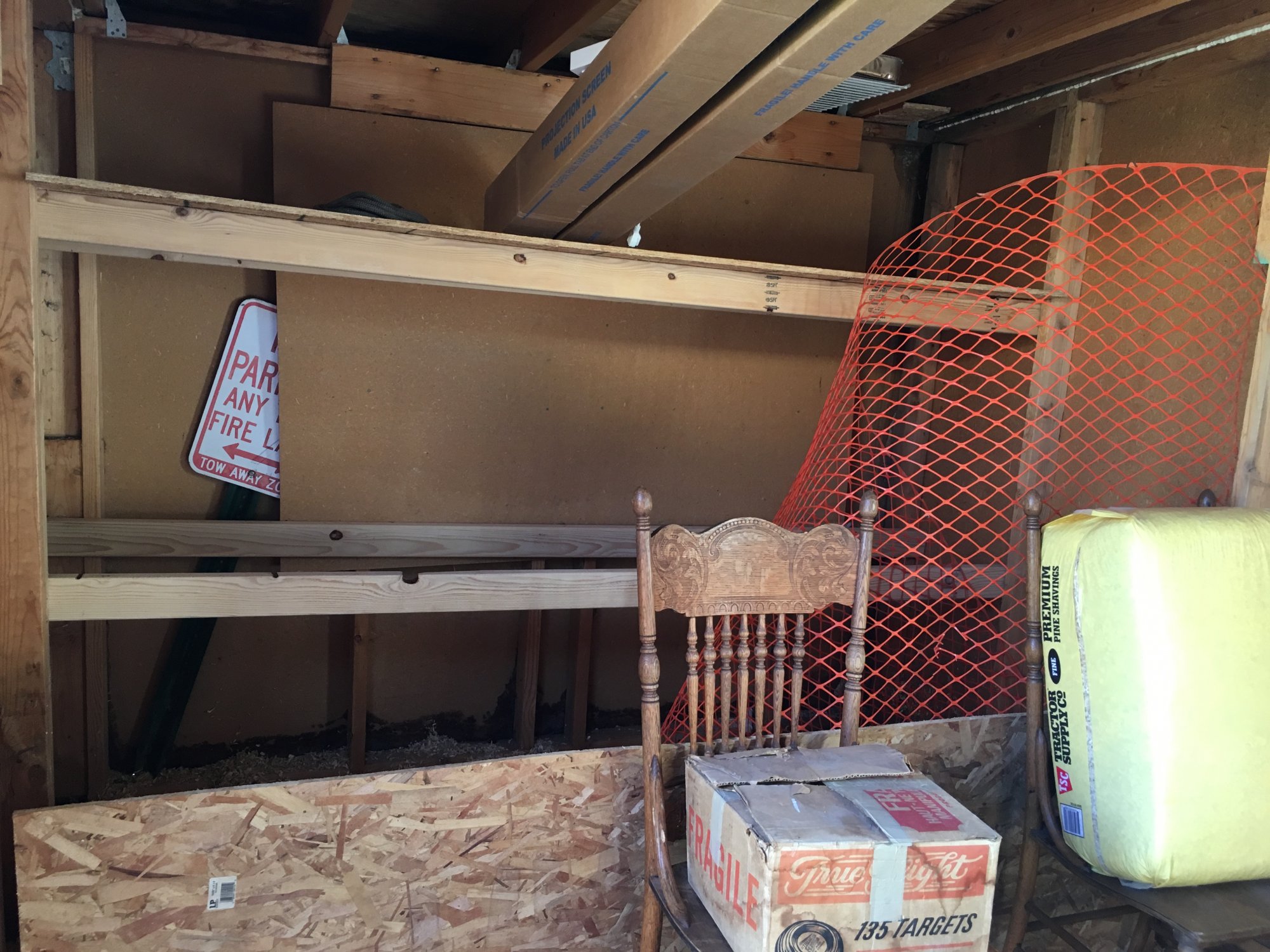 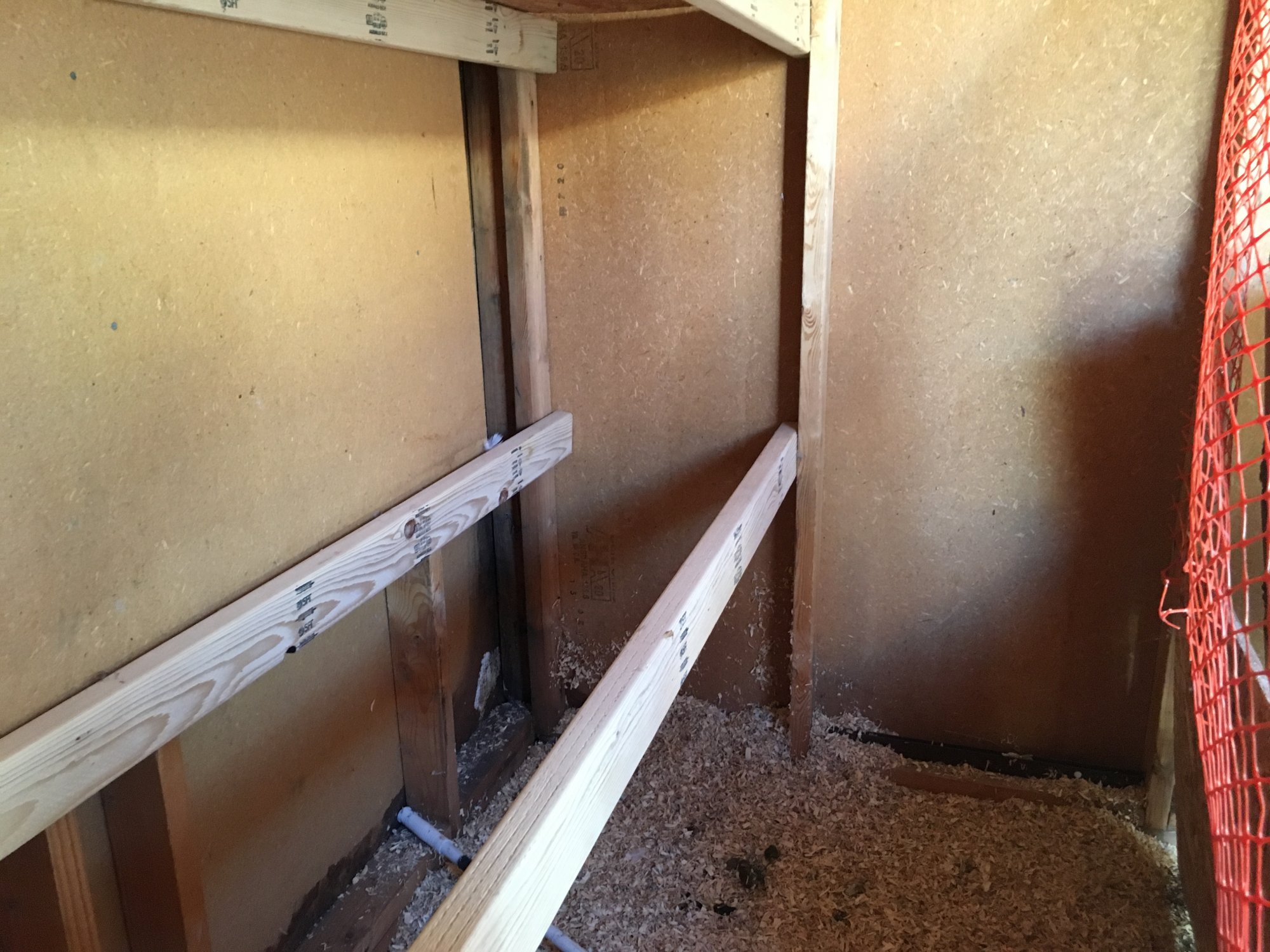 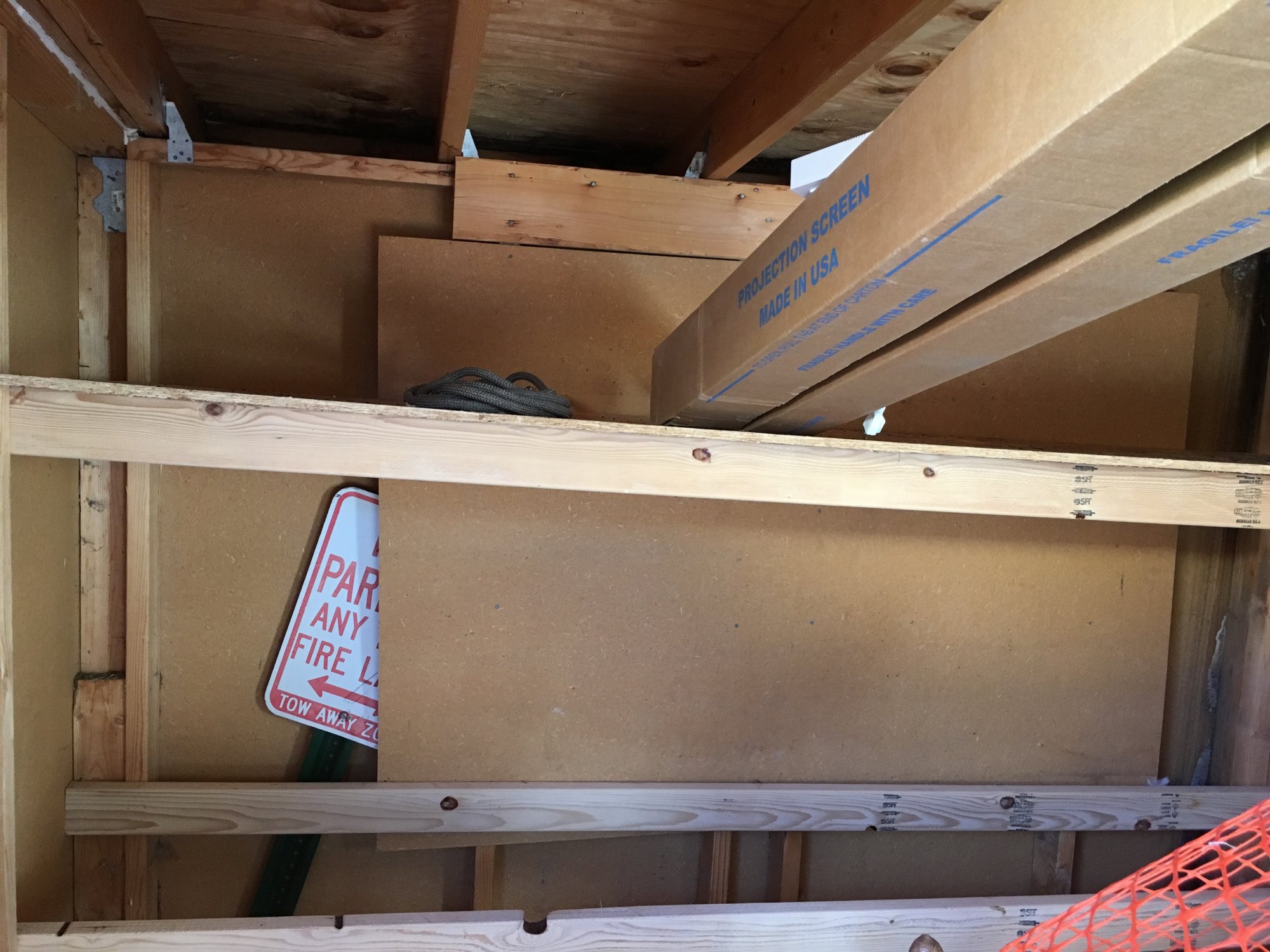 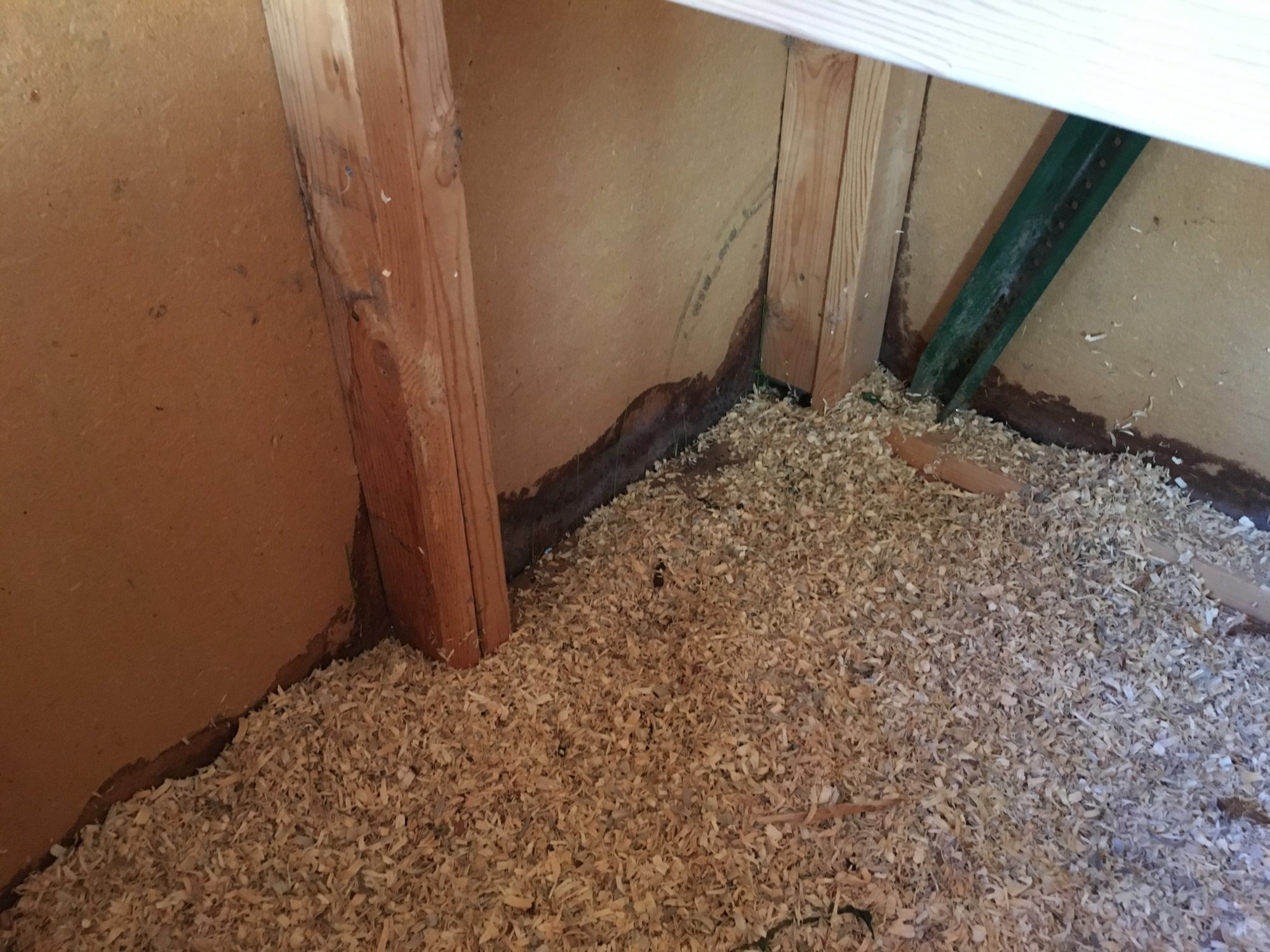 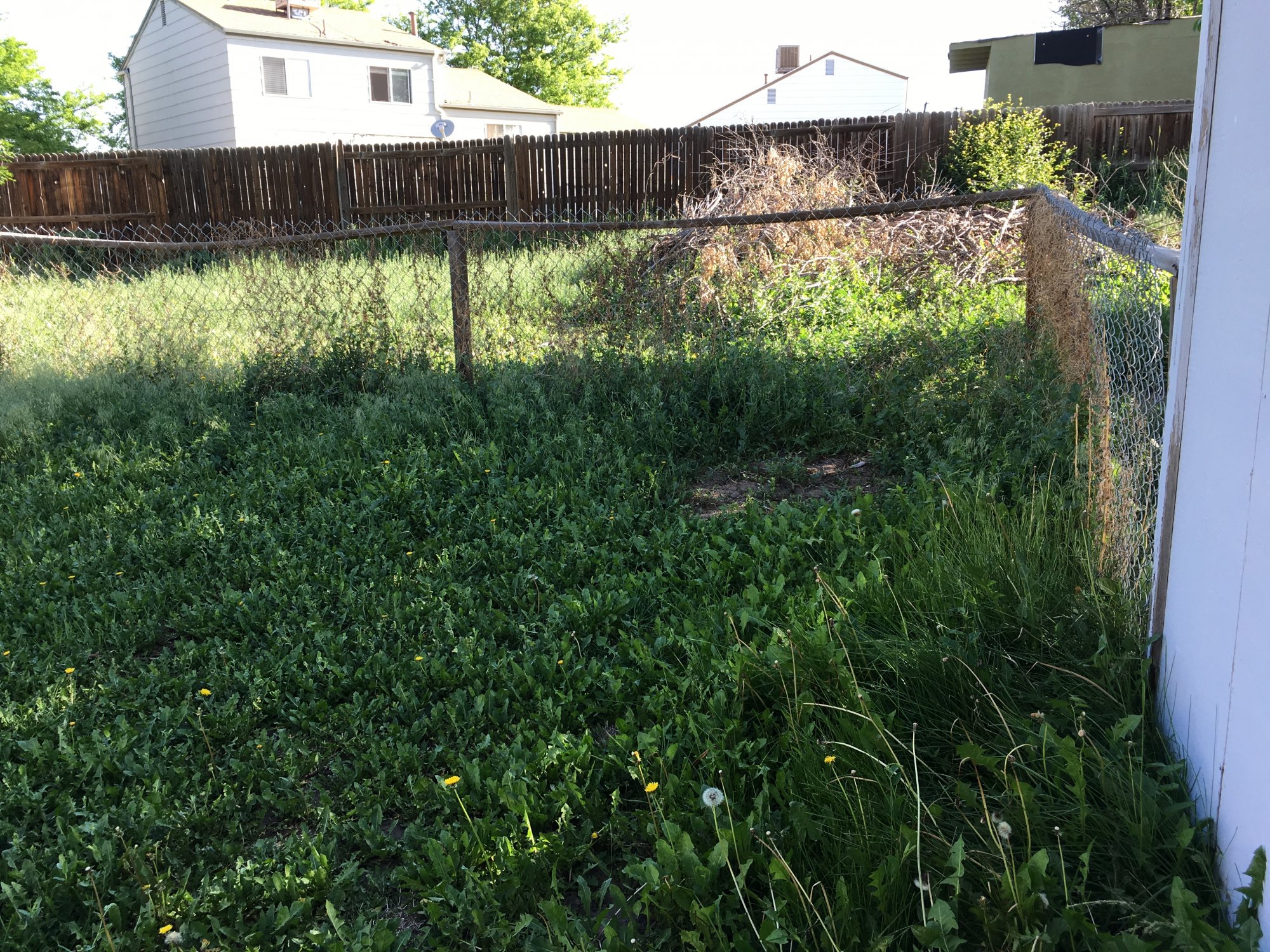 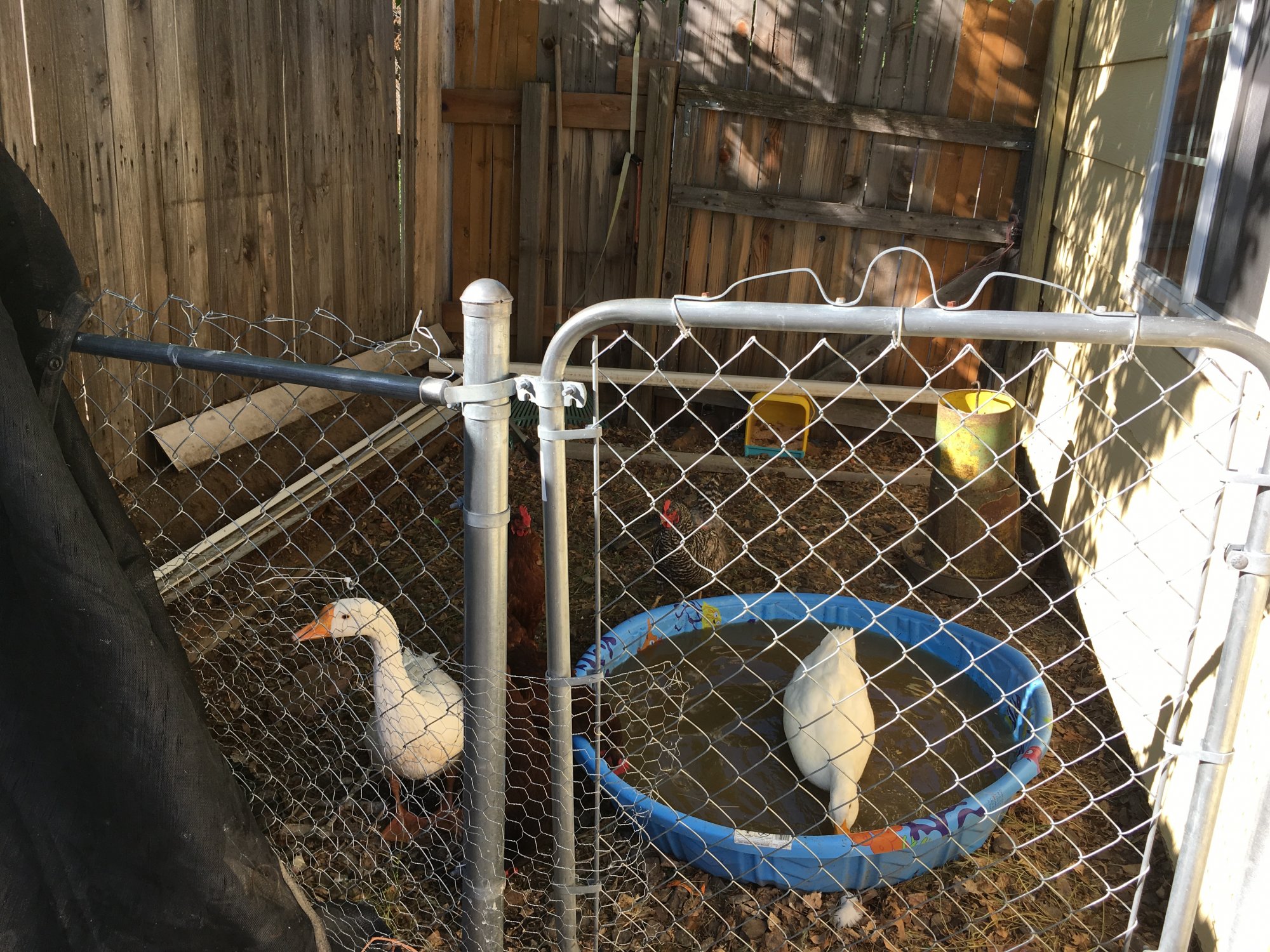 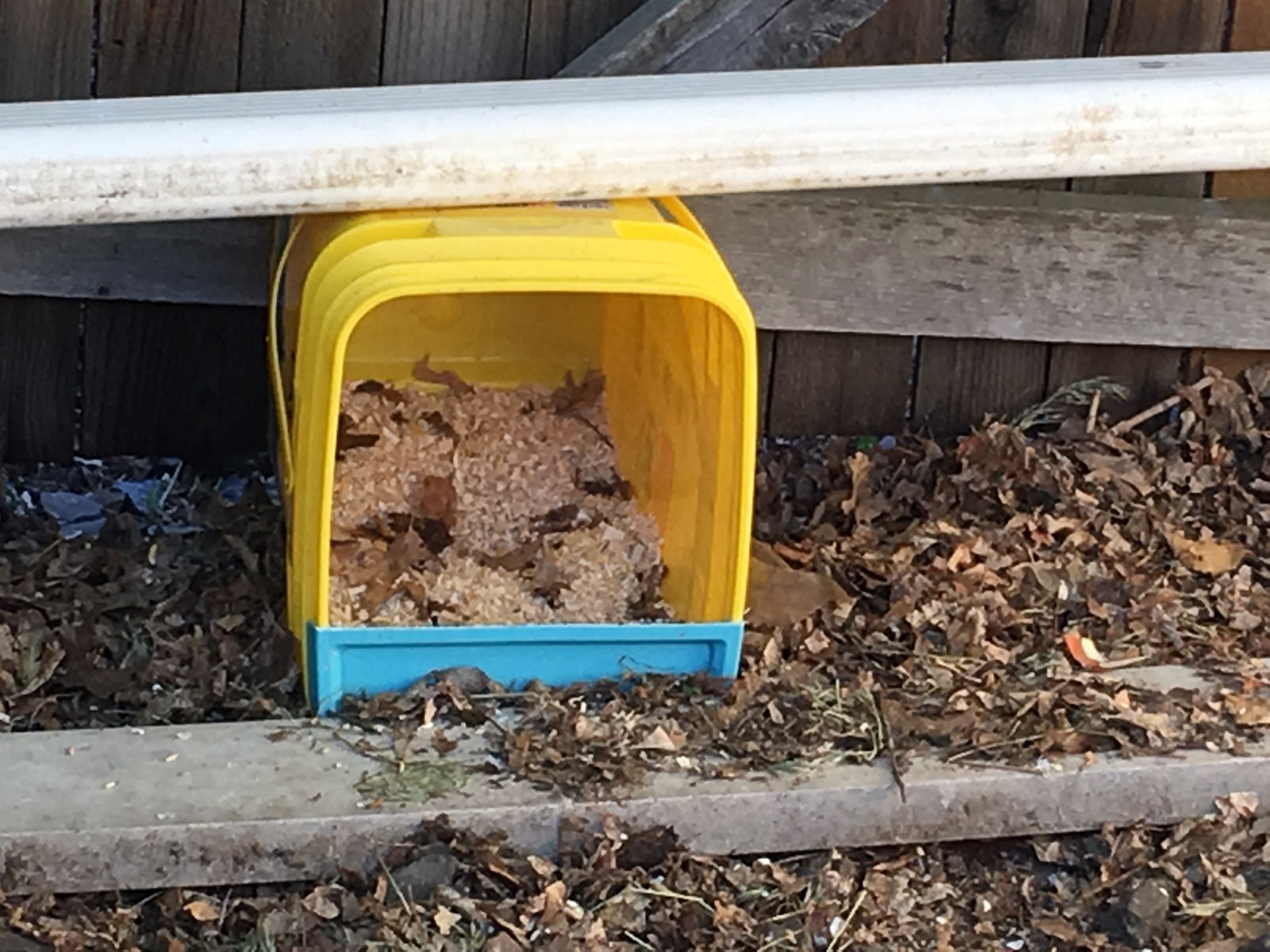 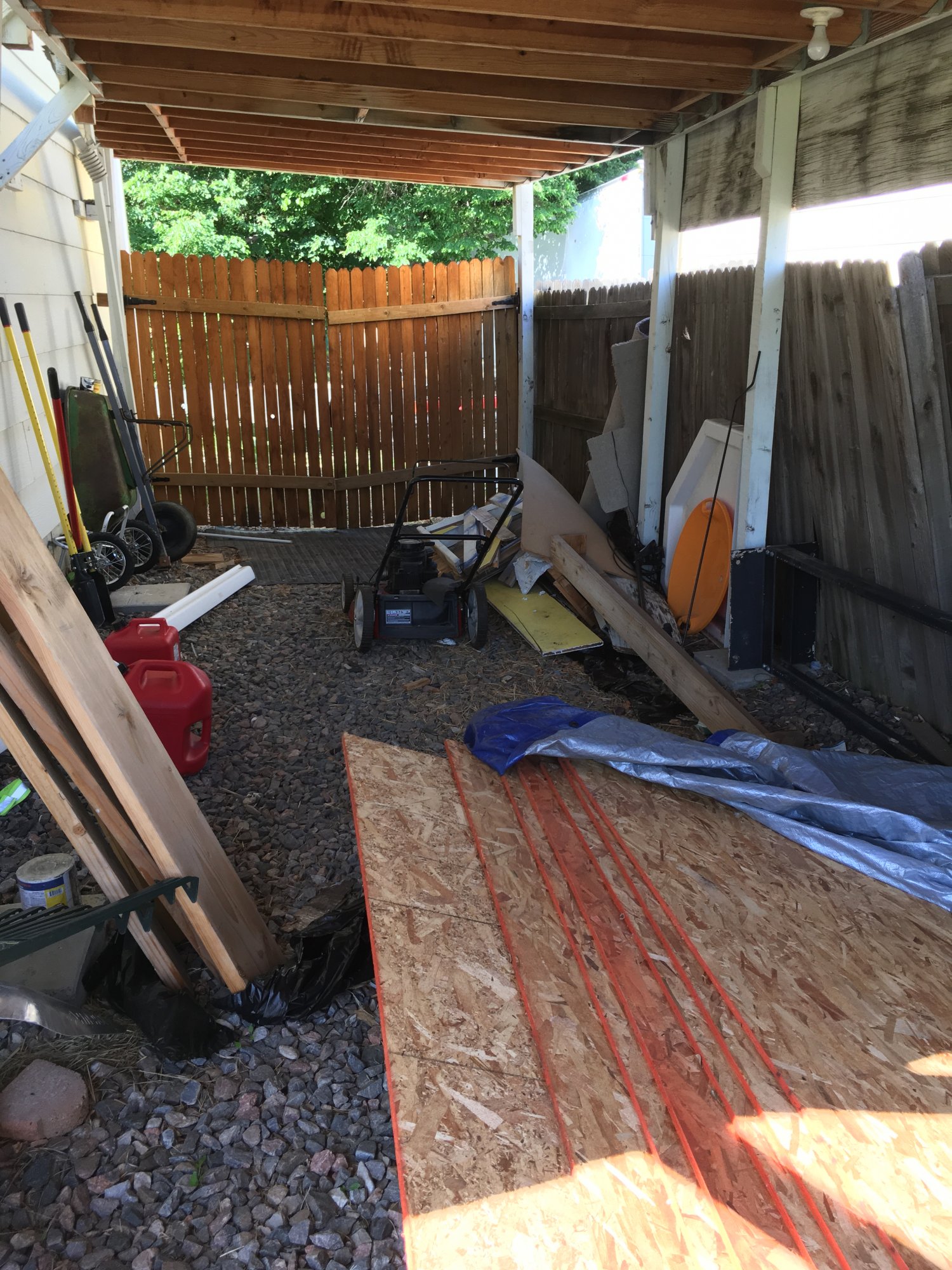 Here is more stuff the previous owner left behind that I am hoping to utilize.

What is deep litter?
2