We have had our backyard chickens for three years. The first flock of four hens started laying at about 5 months old. They had tiny eggs at first, as usual. Some of the first eggs our girls laid were soft, some having no shell. It took awhile before they were laying consistently and for their eggs were normal-sized, bigger and healthy looking. Our EEs laid huge eggs, but only 3 days a week. Winnie, our Colombian Wyandotte, was the best layer. She sometimes laid 2 eggs in a day and faithfully laid daily for most months. (We lost Winnie to a nasty raccoon last year...we still miss her.)

Our new babies, (Fifi and Gigi are Cuckoo Marans and Olga is a Blue Jersey Giant) are finally laying at 5 months old. Their eggs are small but healthy. One of the Cuckoos, for her first egg, laid a HUGE double-yolker! No kidding...her first. Since then, in a month's time, she's laid 3 more doubles and one triple-yolker!!! I have never heard of a triple! The Jersey did an even stranger feat...her first egg was actually 3 eggs!!! She laid 3, one of them was too soft to survive. She is laying daily now, sometimes 2 a day.

Has anyone ever heard of such a thing...double and triple-yolkers and multiple eggs right from the start? Is it as strange as I think? We feed Scratch and Peck layer and a Purina layer crumble. We free-range most of the day too, which, I think, makes a huge difference.

We would appreciate feed back on this. We are enjoying our new flock members and can't wait to see how their laying behaviors and eggs change over time.

Double yolkers are not that uncommon, especially with new layers.
Triples are more rare.
Consistent multiple eggs a day from one bird is hard to believe.
All of these are more likely to happen with high production hybrids than the breeds you list.

Wow! I've had a few double-yolkers from my Sapphire Gems, but a triple!! I don't have any idea how long your "bounty" will last, but it sounds like lots of fun to me. Of course, I have to admit, I took photos of my first double as I cooked it for breakfast.

My 5 Golden Comets laid small eggs to start but gave a couple of dozen or so double yolks.
My 6 Barred Rocks are 12 months old and I've only gotten 2 or 3 double yolks from them. 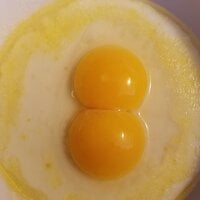 It is crazy! One more double this past weekend. Today, the Jersey Giant laid 2 eggs again. One of them was almost completely round and smaller than the rest. It is fun to crack the eggs and see the doubles!