Ok, I know that one of my babies is either a mallard or a rouen, but the other, I'm not sure about. I want to say it is a cayuga, but do cayuga ducklings have a white band around their neck? Plus the feathers coming in on it's wings are extremely dark mottled brown and black. Someone gave these two to me, and they got them from Privett Hatchery. The one in question isn't crested and does not stand like a runner.

Here is a picture taken on the day I brought them home (maybe 2-3 days old): 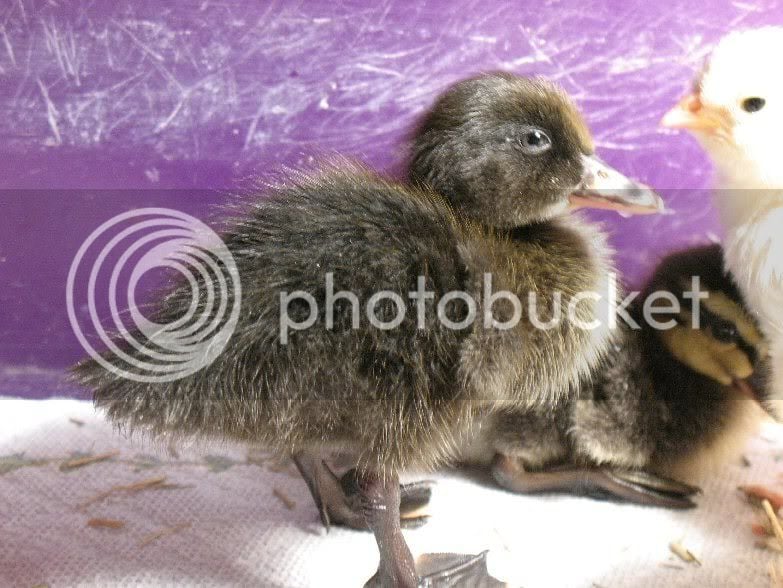 And here is one taken about a week ago: 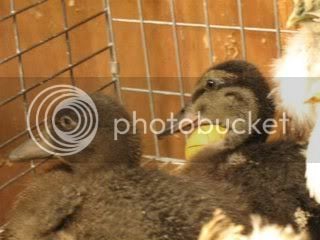 They won't hold still now. They are about 4 1/2 weeks old, are just starting to get feathers on their wings, and already weigh about 4 lbs. The mallard/rouen weighs about 2 1/2 lbs. They have adopted the silkie chicks, and if they are seperated (like for a swim) they do nothing but scream, silly ducks. They are fine as long as their chicks are where they can see them.

Looks like it could be a swedish. Awfully cute babies you got there!

I have two ducks like the one on ther right. Which one is the rouen/mallerd? I bought my two at the feedstore,but the guy didn't know the breed.

My cayugas had a small white patch on their breasts when first born. But their legs and beak are pitch black, and if I'm not mistaken, your babies bill has a bit of color on it? Good luck figuring him out!!

The rouen is the one on the right, with the "racing stripes" on it's face, lol.

It's feet are black and it's bill is black, all except for a little semi-circle at the very end. The color of the outline of the semi-circle is grey, and the inside is black.

It has a band of white/white yellow around 3/4 of his neck. It's tiny, just a few pin feathers thick.

It doesn't really matter what breed it is, they are both sweethearts and I love them! Makes me wonder why I even bother with chickens, except for the fact I don't think I could ever slaughter a duck that I have raised. No qualms about slaughtering roos.

Emily, if you'd like to see my 2 week old cayugas for a comparison click on the link to my blog below. If you scroll down to the post titled "Animal House" you'll see three pics of them. If you click on "older posts" at the bottom of the page I believe that next page has day old pics of them. Maybe that'll help. You're right though, they're adorable no matter what they are!!

HI,
I have a duckling that isn't a week old yet and looks exactly like your duckling on the right in the first pic. Mine also is black and has those goldish racing stripes on the head/eye area. Mine also has 6 of those gold colored spots on it's back. The dad was a Rouen, the mom was swedish/rouen mix. I'm guessing she's a girl as there is no stripe on the neck and I just got a feeing. Here she is, what do you all think? 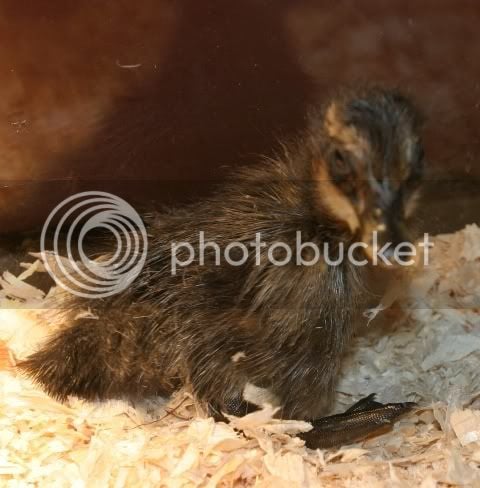