So - I set 6 eggs out of my Dutch Hookbill duck hen (with mixed daddies) around 5:00 p.m. on 3/2 in my Brinsea Octagon 20 Eco. There's a lot about candling eggs here on BYC, and it's all very helpful, but I haven't found much that's specific to duck eggs. So, I'm going to be updating this post with day-by-day pictures for everyone to see! Ducks develop at a different rate than chicks do, and I'm hoping this thread will help newbies to incubating duck eggs learn what to look for when candling!

For a candling light, I'm using a "Guidesman" brand 21-bulb LED flashlight. Bear with me as I experiment with ways to get the best pictures - there's going to be a lot of variation in how I'm holding the eggs, and the distance from which the pictures are being taken for the first few days! I'll have it all worked out by the time all the exciting stuff starts happening in the egg.

These egg shells are thick and pale blue in color.

3/4 - Early Day 2 of incubation:
The germinal disc is clearly visible and growing in all 6 eggs! 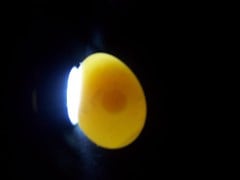 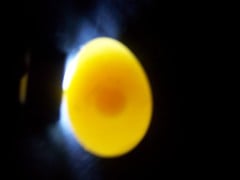 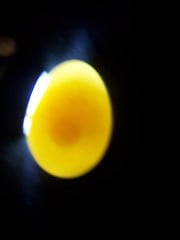 3/4 - Late Day 2 of incubation:
Look at how much that little dark disc has grown, in just about 10 hours! 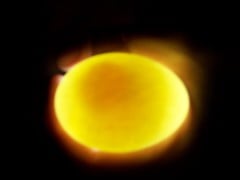 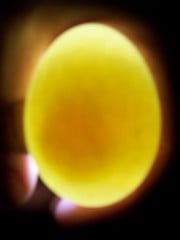 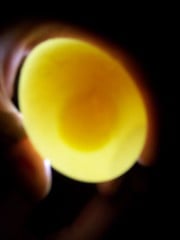 I could see a slight dark spot - this is where the heart is forming - I've marked it with an arrow in the first picture. 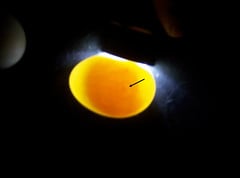 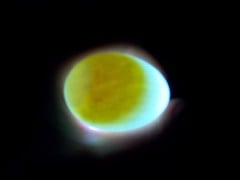 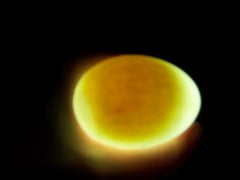 3/6 - Day 4 of incubation:
Now the exciting stuff is beginning! That little dark smudge from yesterday is now a functioning heart (I can see it beating), the circulatory system is developing and clearly visible to the eye - look at the little veins forming! 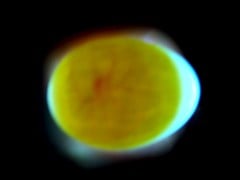 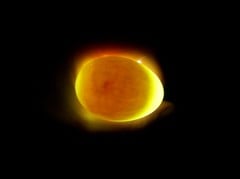 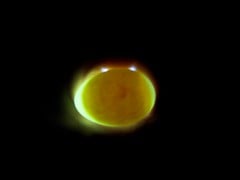 3/7 - Day 5 of incubation:
Well, I have 4 embryos going strong. I tossed two quitters this morning. One had begun to develop when the yolk ruptured (I suspect it was damaged from being out in the cold too long before I collected it), and another had a little blood ring stuck up on the side of the shell by the air cell - I'm hand-turning the incubator, so I'm not sure how that happened. Still, look at these healthy guys: 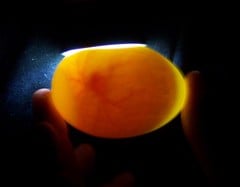 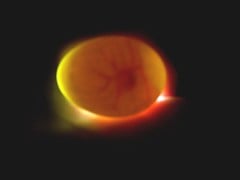 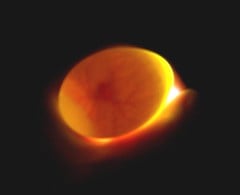 3/8 - 3/9 - Days 6 and 7 of incubation:
The eggs are full of veins now, and tiny little embryos that wiggle and dance around when I shine the light at them.

Good pictures are becoming increasingly hard to get - the eggs are much darker now, and the camera wants to register it all as one dark orange blob in the dark. I'm working on borrowing a better, professional quality camera - but for now, these pictures from my little point-and-shoot Kodak will have to do (please note that the little black dot in these pictures is a bit of stubborn dirt stuck to the outside of the shell): 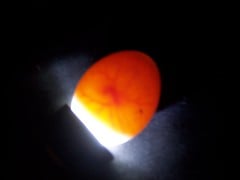 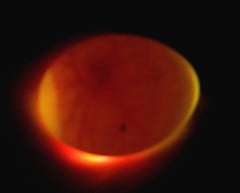 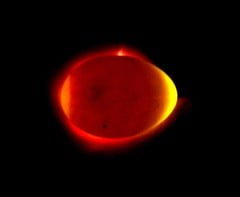 3/10 - Day 8 of incubation (Week 2!):
Sorry the pictures aren't much better - what I need is a camera with a high shutter speed in the dark (the one I'm using is infuriatingly slow, and if you can't keep perfectly still, the pictures blur). But, you can at least make out that the embryo is getting much bigger! 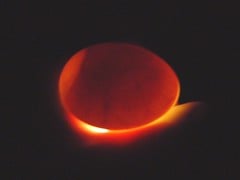 3/11 - Day 9 of incubation:
Boy do these little guys wiggle when I shine the light at them! It's still early enough in the incubation period that I can see into the egg and see the little guys moving around - by next week, I won't be able to see much going on - there's going to be a lot of duckling crammed in those little blue eggs! This Day 9 picture has been slightly edited to make it brighter and to enhance the contrast a bit - just so it's a wee bit clearer - that big dark blob is a tiny little duck: 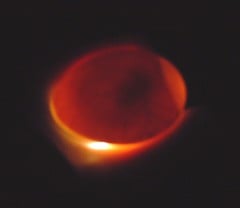 3/12 - 3/16 - Days 10 - 14 of incubation (Week 3!)
Most of the pictures I've posted so far were taken by my dinky, cheap little Kodak camera. Well, after Day 9, the Kodak didn't want to distinguish anything I was seeing from the dark room around it anymore - a good portion of the pictures came out black, with a dark orange ring around the egg. The trick for those of you at home candling duck eggs in these later stages of the incubation period is to shine the light in through the blunt end of the egg, where the air cell is - I could see the most amazingly clear shadow of the little ducklings, and was even able to distinguish the eye and the bill from the head last night! Unfortunately, these are the best pictures I've been able to get in the past 5 days, and they're awful, even though these were taken with a very good, $700 camera I borrowed from the neighbors AND edited to try and make them brighter 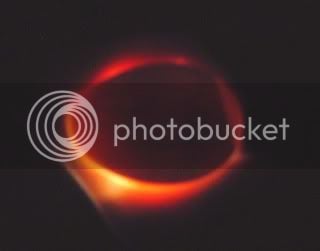 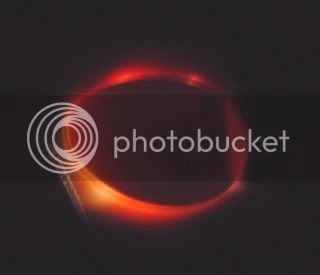 3/16 - 3/19 - Days 15 - 17 of incubation:
These are the best pictures I could get - it must be starting to get a little tight in there! These pictures were taken of the pointy end of the egg, to show the big veins that are down in there now - the ducklings aren't quite big enough that they're filling that area yet. I tried getting pictures of shining the light through the top (blunt end) of the egg, which gives a very clear silhouette of the embryo, but the pictures don't come out - all you see is all the light in the air cell, the rest of the image is dark. 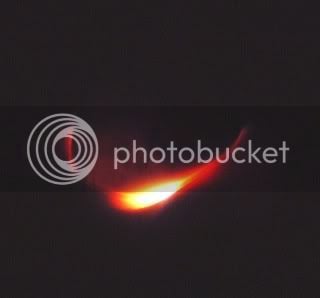 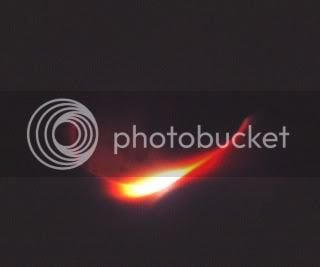 So, after Day 17, pictures became useless. You just couldn't see anything in them. As I'm typing this, it's Day 26 and all 4 eggs have pipped internally and are gearing up to hatch. I have another batch of duck eggs (Welsh Harlequins this time) that are on Day 7 right now, and throughout their incubation period I'll try and snap a few candling pictures of them to fill any gaps in the photo progression.

So, there will still be more updates to come, and I'm trying my best to make this thing complete.

Cool! I am very interested, as later this year I will be getting some duck hens for my poor lonely drake...and EVENTUALLY will be hatching their eggs!!

Looking forward to more pictures as these progress. I have hatched ducks and you are right about there not being alot for duck candling. Pics look great. Nice and clear!

Please keep this updated!! Hopefully soon I will be hatching some Runner/Campbell ducklings!

I'm giving myself a little bump - I have the updates all up now, with Day 9 coming tonight!

I still have the 4 embryos going strong - they sure don't seem to like when I shine the light at them, the way they wiggle and dance around!

Very interesting. I am working on doing something similar with the call ducks I have incubating now. You done a good job of chronicling the egg development so far. I'll keep watching this thread.

This IS a very interesting post! I think anyone who is incubating duck eggs can learn a lot from it.

great pictures. I tried to do some with my duck eggs, but I think you really need help. It is pretty hard to get the camera to focus while holding the egg and the flashlight in one hand.

Great pictures. We are thinking about putting some of my females egg in a bator pretty soon.

I
Tricks for candling brown/dark eggs?