if you could please help me identify genes of our ducks we've collected this year, I'm mostly intersted in their genes and combinations but to work with them, mostly with the recessive genes I need to be sure I have the correct information.
with help of https://kippenjungle.nl/kruisingEend.html I've found gene information I need but I'm not sure if I was able to identify correctly my ducklings so far.

First pic is a separate from others, we bought these as young black ducklings, not all of 'em were pure black, some got black patch orange beeks and legs, this drake (left) has pure black wings. Other drakes and the duck on the pic (right) got the last feathers white. (the legs are black orange patched visible on this pic) Drake's legs are fully black. We've been told they are Pekin x Rouen. I've searched the web for the cross and it showed me the same black ducks. Drake has a bit dark green on his head that is visible already, will he change the color later? he is about 5 months old. 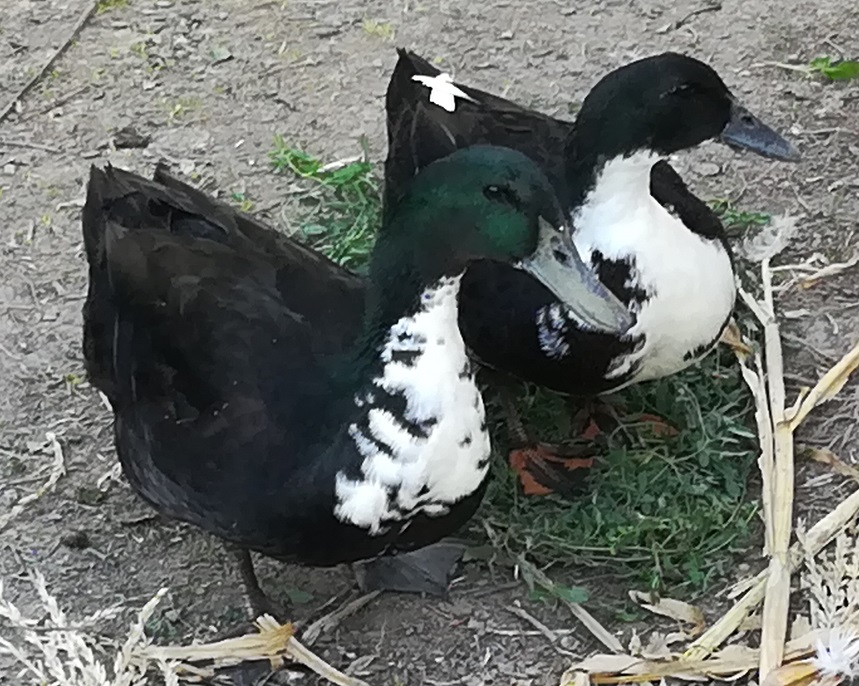 these two are now with our two pekin ducks from last year, what is the genetics of Pekins? as we got only pekin ducks and pekin drake we got all pekin white ducklings, with the gene calculator i've found that the "white" is a recessive gene, but if there is no non-white gene its sure that all babies are white. I have not found any information about genes of Pekin white colour just found one white in the options of the calculator.


my second pic has a bit more duckling they are about 2 months old now and i was lucky to buy some color full mix from a lady she was selling them under name "hungarian peasant ducks"
1. I've identified this duck as silver appleyard, comparing pics on the web of adult ducks, my ducklings etc. we have 3 of 'em.
2. two are whit with black patches and the third is pure white but it's from the same parents. are they Magpie?
3. should be Khaki Campbell, it was twice that big as the ducklings now its the smallest one, i know Khaki should be smaller and not that fast growin as others. And it seems her wings are standing away, could this be "angel wings" ? i've seen worse pics on the web but i know that in this age when the wings are growing they are more heavy and are falling from the body. and If this is really a angel wing, will he/she be able to have healthy duckling for next year? this Khaki per genetics is my most valuable now as it is alone of its breed here and quite rare to find.
4. should be Rouen blue, we got only one duckling we've seen the parents and it was called Rouen blue we should be sure with it, it was gray and now it's brownish with gray back and wings, i was able to make a good pic of it 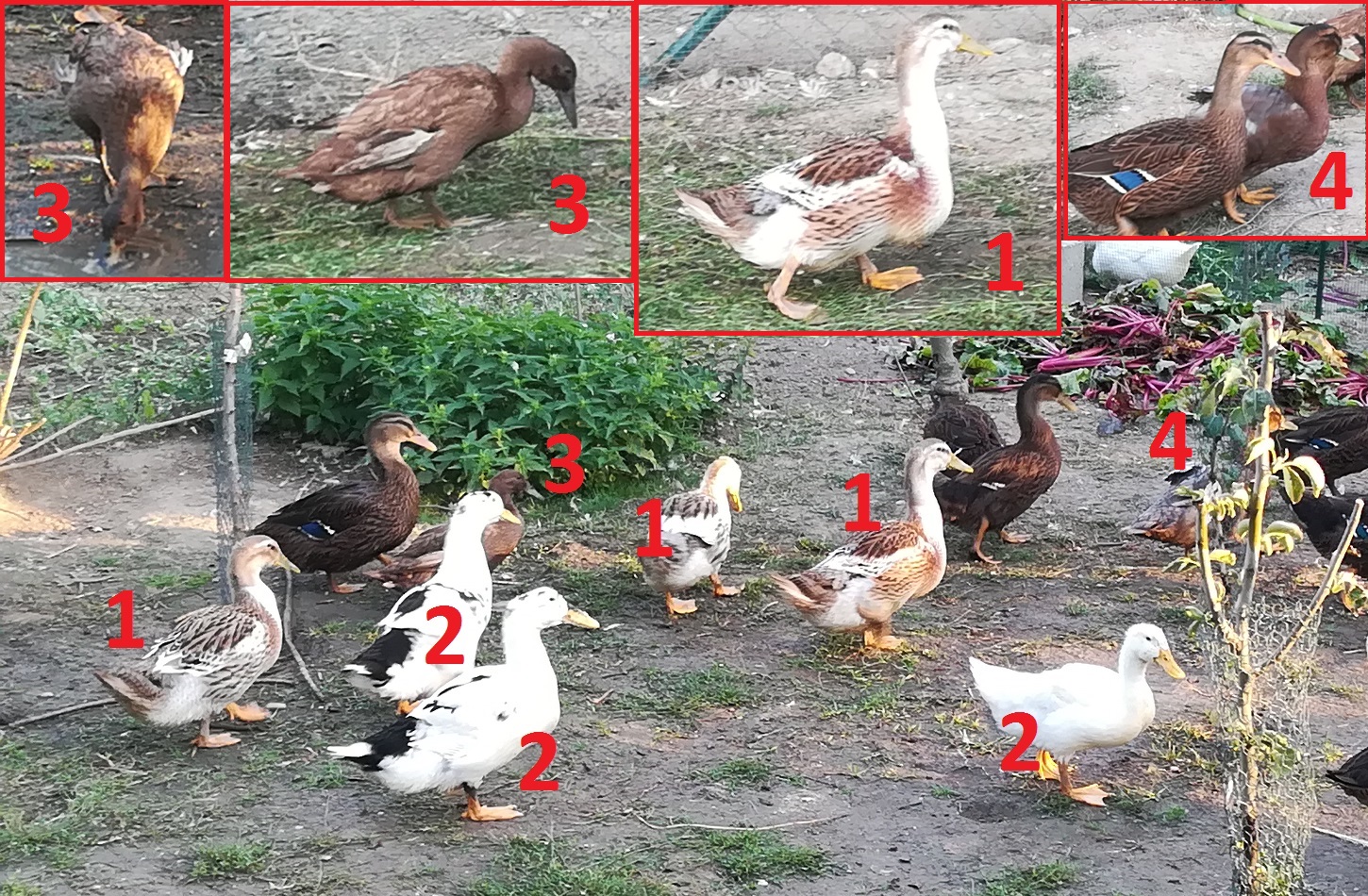 here are our 7 ducklings we bought from the lady 3 were yellow with some darke spots that become brown like apple silveryard #1 on upper pic, 2 are yellow with black patches they are white with black patches #2 one was fully yellow and is pure white from the same parents. and third was brown. As you may see the brown (Khaki?) was bigger and older than the ducklings but it is now the smallest duck from all. 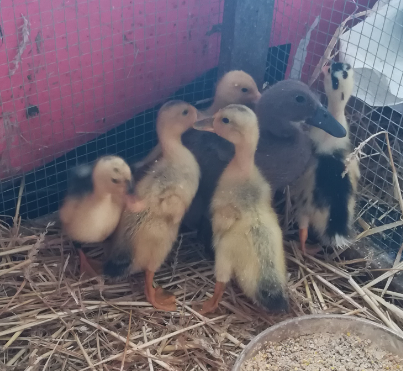 Duck love is recognizable in any language

Hmm, not sure about 1, maybe a saxony?

2’s are anconas, besides the completely white 2. That’s a.. Pekin or white layer it looks like.

3 I cant quite tell as the duck is father away, but looks like a KHaki Campbell.

Hope I helped.
Anyone who knows that I got some incorrect please correct me.
@PirateGirl
@Miss Lydia
@DuckyDonna

The pair in the first picture are black Swedish. That's about all I know for sure and I think FluffTheDuck's answers on the rest are about as good a guess as anyone can make. To answer your question, the dark green color on the drake's head will stay that way.

there were two more with these black ducks, they had more orange on legs and beeks and more white on the rest of the bodies, the remaining two looked pure dark like swedish. OK so actually the Swedish breed is actually Rouen X Pekin that result in black or gray when these two are mixed crossed further?
so it is possible that there are not two different breeds of ducks. 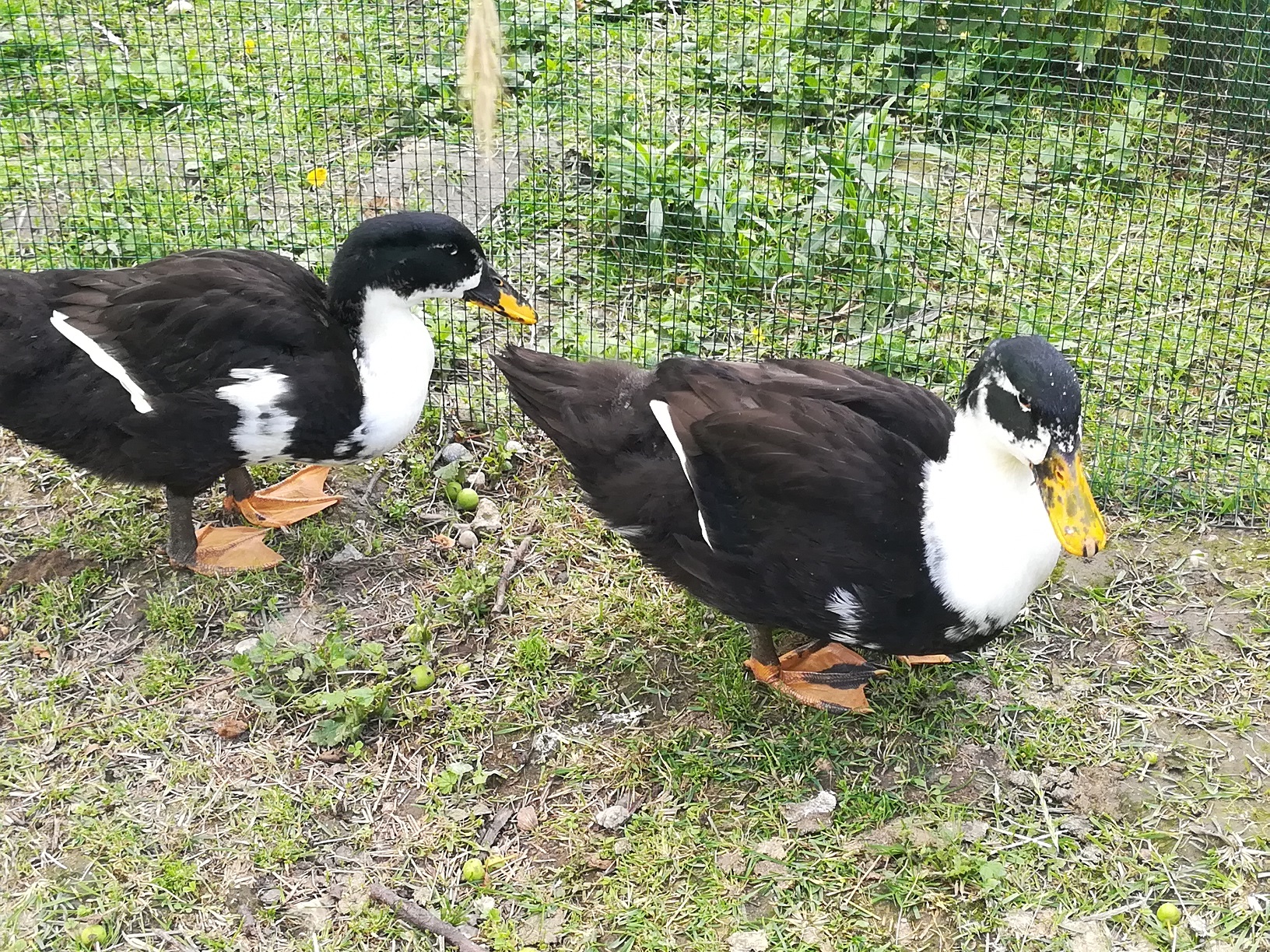 with the gene calculator I've made some reasearch of each colour genetics
per this mallard should be the same colour genes as Rouen,
and some breeds are actually mix of two pair of genes, or 3-4 genes like Welsh Lavender Harlequin.
with some of 'em I'm not sure as the name of the breed and the name how they are called etc are different, so I was comparing mostly the colours.

Question, so if my ducks (white with black patches) are Ancona not magpie, what is the genetic difference between Ancona and Magpie?
Magpie is EE dominant extensive black. Lady sold me third duckling that was with them as sibbling but it's purely white. a small issue is that two black/white are drakes and the white is duck female. If it's dominant she should has black patches too, if it's recessive she should be carrying the gene.
if the Extensive black EE is the same in Magpie, Ancona and Swedish blue (rouen x pekin) what are the other genes that makes the difference in appearence.

3 silver applyeard (if my identification is correct) are one drake and two ducks, as this is recessive it could be carried to ducklings without any issues.

seems the standard Rouen are not needed as whatever recessive genes i'm going to mix the Roun is the result.
Rouen Blue, dominant i nearly went crazy for them, and got only one duck from 20 eggs we bought. Now it's not that valuable as the Saxony is mix of Rouen Blue Silver appleyard.
At least the Khaki is ok, she is most valuable in our breeds pre the gene codes. we've treated her angel wings, hopefully it will be reverted.

Can a Silver Welsh Harlequin have a dusky gene?