@aart - I don't think it was anecdotal supposition, the breeder who wrote that comment had observed this tendency often enough in his/her own flock that saying it to other breeders would not sound like superstition. It was not specified whether trap nests were used to count egg production, so I'm going to assume they didn't, and yet the difference was obvious enough to be noticed over several generations of hatched chicks.

@Hidrainja4 - The breeder works with landrace chickens. The standards for such breeds are pretty loose, so I'm not sure if there's a minimum weight for their hatching eggs. Though, it is true that chicks hatched from big eggs are more vigorous.

My flock is primarily there for egg production. I usually keep my hens for 2-3 years before re-homing them, but I'd like to increase that time. (I'm aware they lay all their lives, though less reliably past 3 years old). If my experience with water-glassing works, I would be able keep them 5-9 years in my coop instead of 2-3 years. Being able to preserve my eggs months in advance means I wouldn't need my flock to lay in the middle of January, to ensure my family has something to eat during wintertime if a catastrophe like Montreal's 1998 Icing Period hits Quebec again. My flock's health would be better for it, and they would, I hope, not develop any health issues until far into their golden years. (Also I get more time to spoil them silly, so that's a plus.)

@Acre4Me - That sounds like the dream chicken for industrial producers o.o Do you have the link to this article/comment? I'd like to read it too, because as far as I know, a chicken who lays with an artificial light runs out of eggs sooner in life than one of the same age who is left to naturally 'recharge' each winter.

@Silkielee - the comment did not specify whether the hens observed (young and old) were broody. It's true that broody hens tend to lay longer in life since they take more breaks between each laying periods, but it doesn't explain why pullet-hatched chicks have an overall shorter laying lifespan than hen-hatched chicks. If both pullet and hen brood, their stock of eggs don't deplete. They're tied there. And in all honesty, if we put the two against each other in a laying race, the hen would lay less than the pullet each year because she's already got a few laying years of headstart on the pullet.

LOL that's easier said than done, most breeders in my area sell pullet eggs, especially if it's a rare breed of chicken. The last time I asked one about the age of his hens, he never outright answered me xD

Eelantha said:
LOL that's easier said than done, most breeders in my area sell pullet eggs, especially if it's a rare breed of chicken. The last time I asked one about the age of his hens, he never outright answered me xD
Click to expand...

I sure don't want to. But what do you do when those you would potentially like to buy from are out of your league?

Eelantha said:
I sure don't want to. But what do you do when those you would potentially like to buy from are out of your league?
Click to expand...

I had to change my goals. 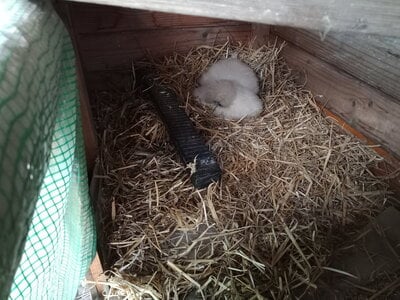 I wanted Ameraucana and Black Copper Marans when I first started with chickens.
Faced an early disappointment of those breeds being widely misrepresented,
and hard and expensive to find real and good ones.
So I had to wait a few years and finally found some local BCM eggs(not great lines) and some CLB which were pretty good.

@aart - I see. I started out with a flock of bendys, and later looked for other chickens to try out in my backyard. It took me five years and alot of reading on BYC, but I narrowed it down to Chanteclers, Russian Orloffs, Ameraucanas and Buckeyes. Ameraucana misrepresentation is widespread here too, and Buckeyes are almost nonexistent in Canada unless you look at hatchery stock and one or two breeders on the other side of the continent. Chanteclers are more available, and I've finally spotted two persons last year who proposed Russian Orloffs hatching eggs and chicks on Kijiji. Were I to try my hand at raising and breeding chickens, I think I'd start with Chanteclers and Russian Orloffs. High rusticity is one of their qualities, so if I can produce hens that lay for a very long time in their lives out of those two races (like this thread's mentioned breeder), I would be a very happy backyarder.
You must log in or register to reply here.
Share:
Reddit Pinterest Tumblr WhatsApp Email Link