Emu Vs Ostrich Thinking of Starting

I have been a member here for some time but do a lot more reading than posting. I have a small hobby farm in Deep South Alabama and love my birds.

I've had goats, turkeys, ducks, and peafowl in the past, but had to let them go when I was travelling 40 weeks of the year for my job. I loved my peas and it still bugs me that they're gone, but those beautiful big birds deserved to be with someone who had the time to take care of them.

I still have some chickens and a few guineas, and my job situation has calmed down enough in the past year that I'm finally able to get back into the hobby farm life, with no intention of going back to the road life.

I have a two-acre pasture with 5-foot fencing and a barn. Currently, there's only a horse out there that my four-year-old really likes feeding apples. So I *think* I have enough room, and with my experience with birds, I'm thinking about raising some emu OR ostrich.

I don't intend to butcher them for meat or oil. I don't have any moral objection to those who do, it's just not my thing. One reason I want to raise these giant chickens is for the enjoyment of the birds. But, the end-game for me is to eventually have a small breeding population that would allow me to sell eggs, chicks, and juveniles.

Keeping those goals in mind, I'm not sure if I'd be better off going with emu or ostrich. I'm hoping someone can help me answer a few basic questions and help me figure out which bird would be better for my situation and goals.

- It looks like more (a lot more) people on here raise emu rather than ostrich. Why is that?
- I read that emu don't lay as many eggs in warmer climates. It's HOT down here, and a major goal is to have lots of eggs and chicks. What is the difference in egg production for emu vs ostrich?
- Will either the emu or the ostrich have problems with my horse? The horse is a permanent resident, but I could section off part of the pasture to separate them if necessary. If one bird is more likely to get along with the horse where I don't have to separate them, that would be a considerable factor.
- Is there a significant difference in the ongoing expense of emu vs ostrich? I'm thinking feed, medication, veterinary considerations?
- Are either emu or ostrich more prone to disease or other medical issues?
- Are either bird's eggs more difficult to hatch? I don't have an incubator, but I plan to purchase one and I'll make sure it is ideal for whichever bird I go with.
- Are either emu or ostrich more difficult to raise to juvenile age? Like maybe ostrich has a high mortality rate in the first six months or emu have a low hatch rate?
- Is either bird more likely to tear down fencing and escape? I'm well outside of the city, but I can just imagine trying to wrangle a half a dozen 300 lb birds running through the woods.
- Will either bird be more hazardously aggressive toward me when I'm inside their fence? I know neither one probably makes a good lap-dog, and I'm accustomed to having a big bird that doesn't like to be touched from when I raised peafowl. I'd just really like to avoid having my ribs broken by an ostrich if emu are less aggressive or vice-versa.

'Will either bird be more hazardously aggressive toward me when I'm inside their fence?'

How much we're all going to learn in getting all the answers!!

@Pyxis has emus, maybe she can tell you about them

Have you thought about Rhea instead, I was thinking I would like a couple if the chickens don't work out, they are not as big. I had a Rhea egg once, it was big so I cracked it in a bowl and made a few omelettes with it.

I haven't considered rhea until you mentioned it. If they are as good or better at egg production when compared to emu/ostrich, and if they can thrive in hot, humid climates, I'd certainly consider them.

Now I know why you want an Ostrich lol. 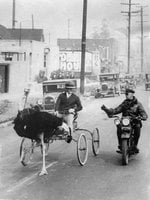 Emu and Ostrich what is the point?

Baby emu's head is tucked under its body!