Feather loss - not growing back as it gets cooler outside

Aw thanks for your support! I don’t think she has an oder no. Does the swelling in her face indicate Merek’s disease too? Can it get a little better when she’s done growing her feathers in?
A

Ali123123123 said:
Aw thanks for your support! I don’t think she has an oder no. Does the swelling in her face indicate Merek’s disease too? Can it get a little better when she’s done growing her feathers in?
Click to expand...

I'm not sure about the swelling of the face, but those feathers and the crustiness makes me think she may have cutaneous form of Marek's.

Let's tag in @azygous and @Eggcessive to see if they have any suggestions. I know you've been working on this for a while.

Now my lovely chicken is rapidly growing her feathers back but she is very ill looking. She is quiet and has her eyes closed for most of the day. Her face is still swollen. Not mites or lice. She recently started stumbling while she walks, unable to walk in a straight line unless she is running. She is still eating and drinking a bit but less each day.
I just sent a poop sample off to the lab a few days ago and will find out tomorrow if there is anything we can learn from that.

Any suggestions about what she might have? Do you think her symptoms suggest Merek’s disease? If so, I understand that can’t be treated. How long to you wait before putting her down? I don’t want her to suffer.

She has also been doing a gulping type thing for about a year now. I never thought too much of it as she has been healthy. Not sure if that helps.

I see an inner ear infection. 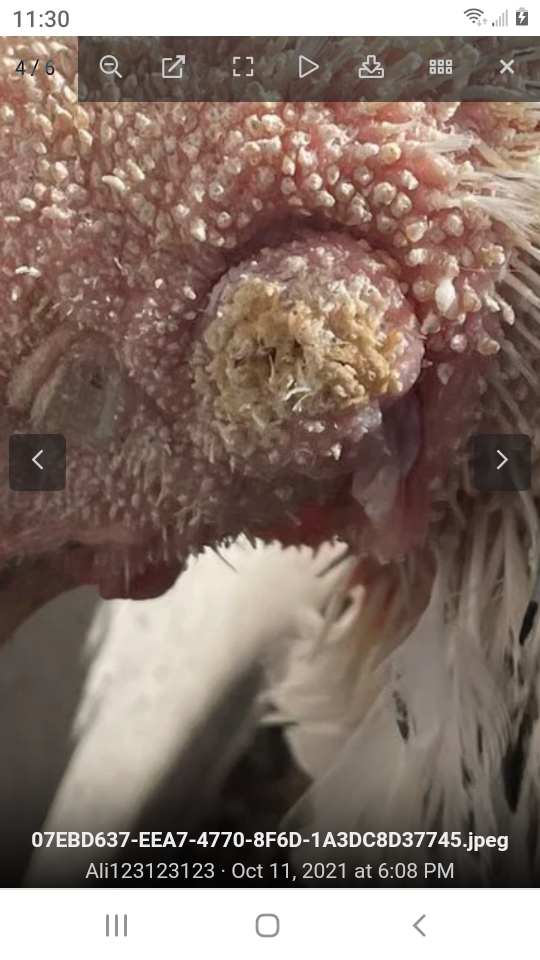 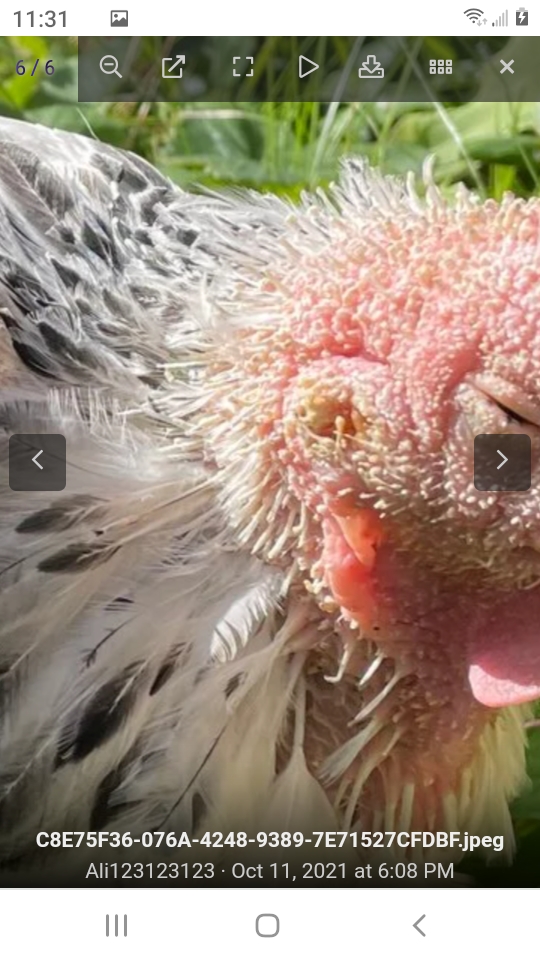 Ali123123123 said:
Aw thanks for your support! I don’t think she has an oder no. Does the swelling in her face indicate Merek’s disease too? Can it get a little better when she’s done growing her feathers in?
Click to expand...

There's a Marek's Disease variant that causes a swollen face, & feather follicle tumors. Or one, or the other.

My heart is weeping for this poor little hen. I've read the thread. You said that this has been coming on for a good while and she was behaving all right and seemed to be happy and healthy. But, now she spends her days with her eyes shut. Her postures in the above three photos indicate a chicken that is suffering pain.

Facing a wall is what chickens do who can no longer stand up for themselves. If she had any tail feathers, it's certain they would be hanging low, indicating pain and exhaustion. But it's the eyes that are most telling. Closed eyes indicates a chicken that has given up.

You asked when it would be time for euthanasia. I would say...now.

Favus could also be a possibility with the feather loss and crusty skin on her head, but Mareks may also be the problem. I agree that she looks like she is suffering from all of her problems. So sorry that she is very ill. I would also consider putting her out of her misery, but that is a decision only you can make.

for you and your precious hen.
A

Thank you so much for your support! She has looked quite sick like this for 2 days now. I’m so hoping to speak with the vet today to hear the results of the poop sample. If there is nothing there and I can’t do anything to help her then I would like to put her down. Heartbreaking. This beautiful creatures are pretty cool!
A

The vet called tonight and the poop sample came back that she had lung worm. I treated my chickens for this last spring as my other chicken was sick and made a full recovery. I was going to try to treat her tonight but she has rapidly declined and wouldn’t eat the medication. I don’t think she drank any water today and I couldn’t make her either. I made a plan with the vet to take her in tomorrow to put her down if the medication did not help but I couldn’t even try it. I think there are many underlying things going on and you have all been very helpful during this difficult journey.

C
Feather loss and not re-growing

Molting or getting bullied?