A) By participating in this game, I promise that all BYC Rules will be followed and that I have read and understood the Role Play Rules that are in a sticky at the top of the Games forum.

B) I promise that all content is to be rated G and suitable for all ages.

C) I promise that there will be no swearing, cursing (including censoring by using symbols) or inappropriate adult sexual activity or innuendo. This extends to mating, breeding or innuendo in non-human characters as well.

D) I promise to treat others with respect and kindness as is the BYC way.

“Once, the races of birds lived together in an uneasy truce. Then the pigeons, under their almighty general, attacked and reclaimed the city as their own.”

The young birds jostled against one another, until they all found a comfortable place in front of the elder. They gazed up at him with excited eyes.

One chick got up the courage to ask, “Why’d they attack?”

“Because we’re the strongest, fiercest birds!” another chick peeped, puffing up her chest.

The elder chuckled. “Well, that might’ve been part of it.” he cooed, the chicks straining forward to hear his soft voice. “But it wasn’t the only reason.

“For many, many seasons, the races of birds prospered and multiplied. Eventually, many came to the city, for it had many sources of food, less predators, and better weather. There were skirmishes, but they were short and between only a few birds. Then, a horrible drought came, and the birds of the overcrowded city, who had already been low on resources, found themselves having to fight to survive. The pigeons, though, were the smallest birds, and had no means to defend themselves. Even before the drought, they had been easily overwhelmed by the other races.

“Then, one pigeon rose up and took control of the various groups, transforming them into organized troops. This pigeon was the first general, who has names too numerous to count. He drove away the crows, ravens, and even the mighty seagulls with his army.

“But the other birds were angry. A raven came into the city by night and slayed the general. Though this was the work of but one bird, the pigeons were enraged. A new general came and led them to battle, killing many birds, not all of them ravens. The assassin, though, was never caught.”

The younglings stared up at him in awe. “What happened next?” chirped one.

“Well, the other races learned to fear the pigeons.” the old one said, a hint of weariness in his voice. “We rule the city, and under our general, we will for many generations.”

The younglings peeped to each other excitedly. But the elder pigeon just sighed. Though they had won many battles, he knew that it wouldn’t be the last time they’d have to fight. The war was far from over.


***
​
Summary
The four races of birds living in and around the city prospered for years because of an overabundance of food and fair weather. Then, there was a drought, and the birds fought until the pigeons drove most of them from the city. For two years, the pigeons have ruled the city, but the other birds are starting to get restless. There is not enough room outside of the city for them to live. Now they want to take back what was lost.

***
​
Pigeons
The pigeons are a war-like race. Even though they have a ranking system, they are often disorganized. The various gang leaders are distrustful of each other, and there is constant fighting among the ranks. They tie sharp things to their feet for battle, since both their claws and beaks are too small to do any real damage. Their main advantage in a fight is strength in numbers. The pigeons live primarily in the city, where they are often seen in flocks foraging together or gathering on rooftops.

Ranks
General: The top pigeon. Controls all the pigeon gangs, has a group of lieutenants that follow their orders and make sure the gang leaders stay in line.
Lieutenants: A group of pigeons that are loyal to the general and follow their orders
Gang leaders: Leaders of the various pigeon gangs under the general
Gang member: Pigeon in a gang
Non-member: Pigeons not attached to any gang

Vocabulary
Death-swords - bird control spikes
Pigeon-eaters - peregrine falcons, their main enemies, though can also be a general term for falcons and hawks
Night-stalkers - generally refers to cats, but can also refer to owls, raccoons, and other nocturnal predators
Loud-stompers - humans (only pigeons call them this)
Razor-talons - the sharp things pigeons collect to attach to their claws as weapons

Crows
The crows are very loyal to their family. The offspring of a pair are likely to stay with their parents and help raise their siblings for years. These birds will come together in huge flocks to swap experiences and news, though to other birds it just looks like a chaotic mess. The crows live in and around the city. They absolutely despise the ravens for unknown reasons, but have entered an uneasy truce with them in order to fend off the relentlessly aggressive pigeons.

Status
Loners: Crows not in a family group

Ravens
The ravens are more solitary than most of the other birds. Though they are known to, on occasion, group up in flocks if there are important matters to discuss. It usually takes several days of careful preparation, but once united, the ravens are a formidable force. They are very proud of their status as forest birds, and most know the layout of their home territory like the back of their wing. They are very stealthy, and may even teach another bird something if they have the patience and means to pay.

Seagulls
The seagulls are quite the rambunctious group. They are usually disloyal, even to members of their own race, but won’t hesitate to band together in the face of danger or the pursuit of food. They are frequently seen trying to trade whatever odd things they’ve found with others. Seagulls, partly due to their larger size and partly due to their inflated egos- bolstered by living near the sea- regularly act fearless towards other creatures, even humans.

Status
Seniors: Older, well respected seagulls. Other seagulls come to them for advice about nesting sites, pigeon raids, and where to get food. Some seniors require pay for their services, while some will give out information for free. They often lead attacks, and are no less fearsome than younger seagulls.

I shall appease you with my one character so there is no chance of confusion.
Raven
Name: Earl
Age: 16 years
Gender: male
Personality: has a high status and a lot to teach if you lend an ear. Reserved, but a strong fighter. Good old bird.
Description: very large raven, a little ragged and grey with age, but pretty well kept
Rank/Status: old bird
Family (if significant): open. His ancestors are dead though
Mate: no
Chicks: no. He's willing to talk to a few and explain things, but little patience for his own
History: strong fighter, has fought before, and he will fight to his end
Other:
Username: @AMERAUCANAS4REAL

AMERAUCANAS4REAL said:
I shall appease you with my one character so there is no chance of confusion.
Raven
Name: Earl
Age: 16 years
Gender: male
Personality: has a high status and a lot to teach if you lend an ear. Reserved, but a strong fighter. Good old bird.
Description: very large raven, a little ragged and grey with age, but pretty well kept
Rank/Status: old bird
Family (if significant): open. His ancestors are dead though
Mate: no
Chicks: no. He's willing to talk to a few and explain things, but little patience for his own
History: strong fighter, has fought before, and he will fight to his end
Other:
Username: @AMERAUCANAS4REAL
Click to expand...

Accepted! Congrats for being the first.

RoostersAreAwesome said:
Accepted! Congrats for being the first.

I am always first and last
And have absolutely no self control to not join rps.

watching
ill probably be too busy to join but ill see, looks cool

Name: One-Toe
Age: 5 years
Gender: Female
Personality: Fierce, cold, calculating, and surprisingly fast. Doesn't talk much, but when she does, you should probably listen.
Description: Darker gray pigeon with only one toe
Rank/Status: General
Family (if significant): Open, if anyone wants to make some
Mate: An unimportant lieutenant
Chicks: Open. General One-Toe doesn't have time to raise her chicks, so allows other pigeons to raise them.
History: No one knows. It is rumored that she lost her toes in a battle with a gull.
Other:
Username: RoostersAreAwesome

Name: Splash
Age: 2 years
Gender: Male
Personality: Will do anything to satisfy his curiosity. Loves the water for some odd reason. Open and accepting, is often seen hanging around seagulls and crows. Adventurous, and loves to collect things.
Description: 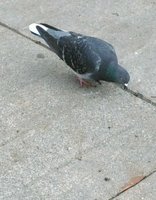 Rank/Status: Non-member
Family (if significant): Open
Mate: None
Chicks: None
History: The only chick to hatch. His parents hated his love of the ocean, and abandoned him as soon as they could. Other pigeons try to stay away from him, but he doesn't seem to mind.
Other:
Username: RoostersAreAwesome

Name: Fish Sticks
Age: 2 years
Gender: Male
Personality: Speaks too fast for many to hear. Has weird ideas that don't make sense to anyone. Very friendly, unless you try to steal his food.
Description:

Rank/Status: N/A
Family (if significant): Open
Mate: None
Chicks: None
History: None
Other: He chose his own name
Username: RoostersAreAwesome

Raven
Name: Molly
Age: 3
Gender: female
Personality: she is sassy and can be a nice kid, she is a bit sarcastic all the time
Description: tall for her age
Rank: middle class
Family: open
Mate: non
Chicks: non
History: she is a fighter and a strong girl, not one to be messed with.
Other:
Username: Butterscotchbitesfinger

Feathers! A story about chickens that I'm writing!
2