One of the additions I added to my little coop is a roo for my girls. Right now I have three hens: two a year and a half old, one is 6 months old. The roo is about 6.5 weeks and I was just wondering what an expected timeline re behaviours like crowing and trying to mate would be.

So far he's been pretty quiet and mostly just content to just roost and cuddle with the hens, and I'm ok with that, but also wondering how much to expect behaviour to change with age?

He's a little smaller than the older rooster the person I bought them from had available but that one was two weeks older and I thought the younger age would let me accustom him to handling and also being a pet more.

So far the new hen and rooster are a LOT braver and calmer about being handled than my older hens, which doesn't surprise me since the older hens also came to me a lot older and weren't used to a lot of handling. With that in mind, I wouldn't mind if all of them got a bit more accustomed to regular interaction with me. If anyone has any advice for this, I would appreciate it.

Before these four, I had had two girls from the Wild Bird Center, who because of their previous living situation were some of the calmest and cuddliest birds, let alone quail, I had ever met. Baba Yaga would roost on my chest and just hangout, and Kikimore would actually play a little with my Chihuahua.

What breed are they?

When your cockerel reaches sexual maturity, you will start seeing the behavioral changes. How quickly they reach sexual maturity is breed dependent.
My Delaware started crowing at 19 weeks. He started mounting my non-sexually mature 19-week old pullets at the same time.
This guy, although nice, was rehomed to make way for the boy I purchased to run the flock, my Salmon Faverolles, Fabio.
Fabio started crowing the day after the Delaware was rehomed. He is not so nice. But he is not mean either. He is going through teenage hormone driven stupidity and has had a few tune ups.
How a young cockerel behaves as he matures is pre-programmed into the bird.
You will find most people with a lot more experience than I will advise not to handle your cockerel as that will increase the chances of human aggression when the hormones start flying. I fall to this line of thinking. But I don't want my rooster as a pet, I want him to run my flock and guard them. He does that well.
He hated being handled as a chick and hates it just as much now. Our relationship continues to develop into one of mutual respect and distance. That works best.
Time will tell what kind of boy your cockerel will turn out to be.
You will be hearing from a lot from other members here. You will be presented both sides of the rooster raising mind sets.
Good luck.

Sorry i should have specified that they're coturnix quail.

I don't know much about quail... sorry!

Usually roos start crowing and mating when they are 6-8 weeks old. Your new boy might be a little shy right now, due to being moved, but within a couple of weeks he should be mating. He might not crow much if he is the only roo and has several hens.
Behavior wise, it can change a lot when he matures, but his genes have much to say as well - one roo might continue cuddling with all the hens, another might select a favorite and chase the others away, some are just bullies to everyone or get random attacks of bad behavior..

Pics of the new hen and roo cause theyre so pretty. 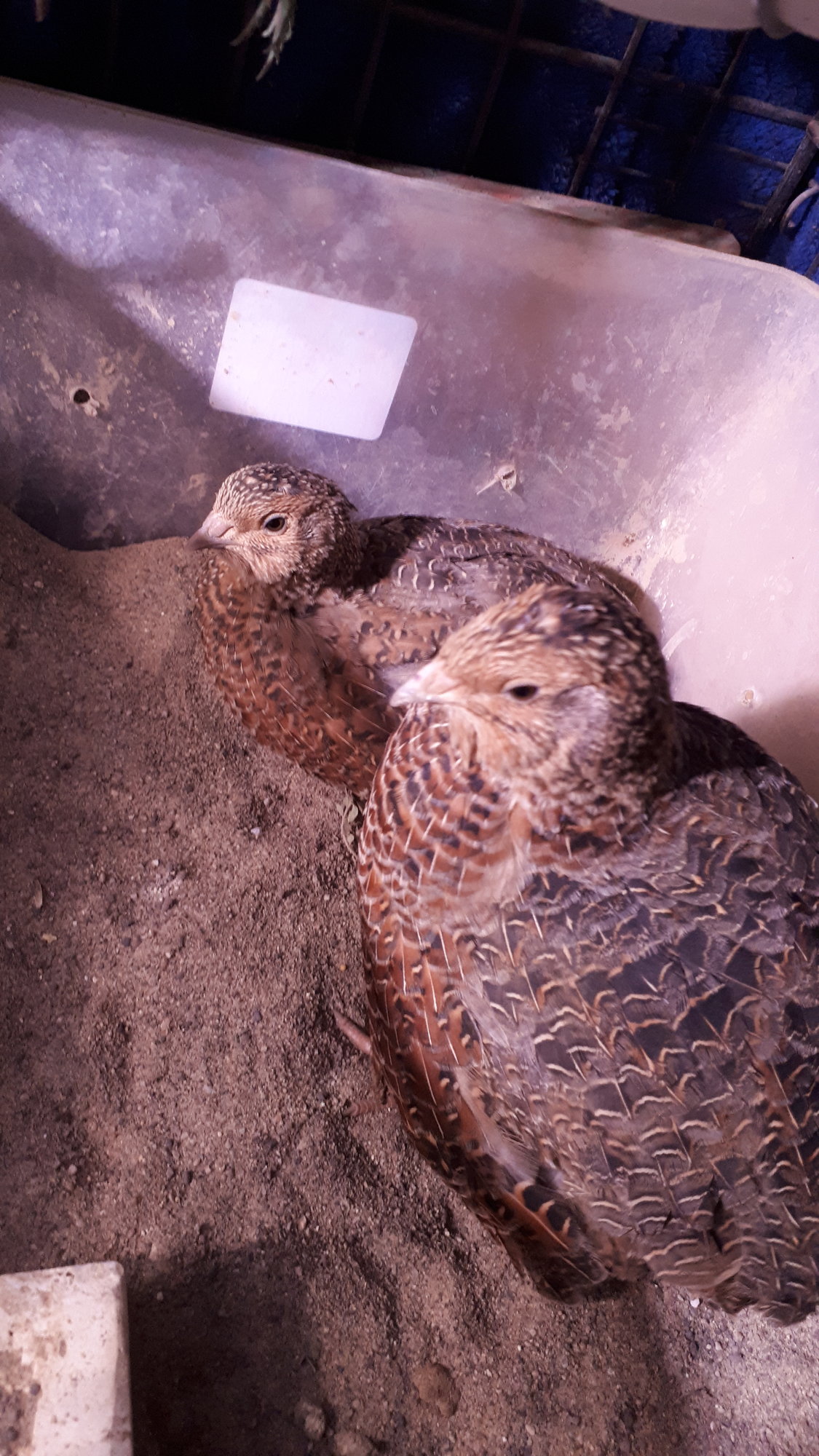 Quails! You need @CapricornFarm for questions about quail roosters, she's their queen.

But from what iv'e heard little quail roosters go through that butthole hormonal stage as well but i'm not sure quite when.

Pics of the new hen and roo cause theyre so pretty. View attachment 1589017
Click to expand...

It might just be the lighting but those two appear to be male, to me! Both have reddish breasts?

007Sean said:
It might just be the lighting but those two appear to be male, to me! Both have reddish breasts?
Click to expand...

Tibetans or Dark Range don't get the same sex differences that you get with the pharaoh and italians. I vent sexed them.

I've been so paranoid though that I ended up with two hens or two roos but I just reconfirmed a few minutes ago.

One had NO foam or rising ball, the other had foam.

Anybody Else have Monogamous Rooster?