Hatching: When do you give up hope? FINAL UPDATE pg2

We had 2 babies hatch yesterday and 3 today. There are still 2 eggs left, both "full-term" but neither has pipped yet. When should I assume they died, and throw them out??

Im trying to hold out hope, but I'm just not sure how long to keep them.

eta picture of the 5/7 babies 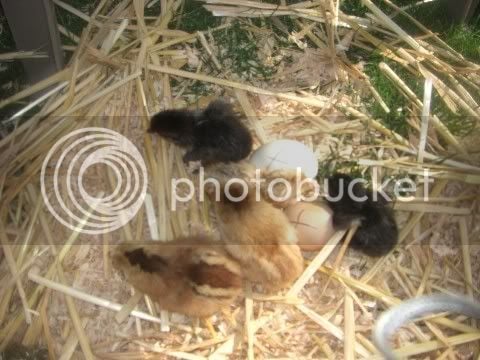 You are going to get many different opinions. I usually will open the remaining eggs
gently from the top 24 hours after the last one has hatched or on day 22, whichever
is sooner.

Many leave them until day 24.

Every hatch is a learning experience and I want to know if the egg wasn't fertile,
if it died in developent, or if it couldn't get out of the shell.

If you pop open the top and notice a live chick then you can do an assisted hatch.

Let us know what you find.

I have several birds running around outside who were late and needed help hatching.
Last edited: Sep 18, 2008

This is probably a stupid question, but by "open them from the top end" does that mean where the aircell is?

Quote:
Not a stupid question. Yup the air end.

I just looked at your pic you added? Was it a broody hen that hatched them, not
an incubator?

Yes, our little banty played surrogate mother to a clutch of eggs that were given to us- some silkies, banties and americaunas

You can also pick up the egg, gently tap on it and chirp. Generally, if there is a live chick inside, it will chirp back. My last batch i did that - nothing. Put the eggs back in the incubator, then someone chirped. So, give them a minute to respond.

Quote:
Yeah that's what I would do, especially since they aren't pipped. I always let mine wait till at least 3 days after they were supposed to, but they never hatch. Just wishful thinking. I can't bring myself to open the egg and find a dead chick, it would probably make me want to help all of them out, and we can't have that! I did have one that hatched on its own 2 days late, after everyone else was already in the brooder, so you never know. But like airheart said, hold it up to your ear, and tap the shell with your fingernail, and it should tap back if all is well. It would be very cool if it peeped. I had one that did that, and I was so surprised, I almost dropped it!!

Quote:
Is she still sitting?

Oh absolutely dont give up hope when "hatch" days arrives and goes! I had two hatch today that I was pretty positive werent going to. I was checking unhatched eggs, candling, taking them out of the hatcher when one chirped at me. Within an hour I saw a pip. Then another egg pipped shortly after that. So sometimes you get a great surprise.

A
Momma left her hatching eggs, can I give the chicks back to her safely?
2

When is the best time to take out hatched chicks?