I have a pullet (10 months old) that a week ago started acting a little slow... she separated herself from the rest (two other 10-month-old pullets and two 5-years (or more) old hens) at mealtime, waiting to eat until the others were done. Then she would often head off by herself. She quit laying. At the time I was doing a little coop maintenance, so I thought maybe she was thrown off by the changes.

A few days later I noticed some heavy pecking-order stuff going on with the two old ladies and my buddy Indie. So I separated them (the bullies) out from the rest for most of the day, and she seemed to be improving... for about 2 days.

Now she's really slow - but still stands, walks around and hangs with her peeps. She's just more puffed up and much slower than they are. She doesn't eat as much or as early. She waits to come out of the coop... she's drinking, but not like the others. She's usually a real pill to catch, and she still is, but she's calmer now when I do catch her. She's usually a non-stop talker (clucks and clucks at me non-stop), and she still is, just not nearly as much.

@TwoCrows and I were thinking mabe cocci, so I started them all on a round of Corid yesterday. (It's been 24 hours with Corid.) About 36 hours ago I noticed her shaking her head a bunch, lightly, but definitely a shaking. So I trolled the threads here and did a real examination on her. Here's what I found. Nothing.
- her ears are crystal clear
- there are no bugs on her anywhere (ears, under wings, vent, etc.)
- her feet are normal temp (no fever)
- her breathing is normal
- no runny nose, no watery eyes

Throughout it all, her crop has been empty in the morning and has food in it at bedtime (although not as much as usual).

They were wormed 3 months ago.

I have a vet that can see chickens BUT it's a hefty $$, and this month is not feasible for the hefty $$. I'm wondering if anyone has any thoughts? None of the others are in the least bit affected.

MichelleT said:
separated herself from the rest
Click to expand...

MichelleT said:
at mealtime, waiting to eat until the others were done. Then she would often head off by herself. She quit laying.
Click to expand...

MichelleT said:
Now she's really slow - but still stands, walks around and hangs with her peeps. She's just more puffed up and much slower than they are. She doesn't eat as much or as early. She waits to come out of the coop... she's drinking, but not like the others
Click to expand...

MichelleT said:
36 hours ago I noticed her shaking her head a bunch, lightly, but definitely a shaking.
Click to expand...

Can you post a photo of how she stands around?
She stopped laying - how were her eggs in the past - hard shells, no problems laying?
Have you felt for any bloat/swelling, feeling of fluid in the abdomen?
How is she holding her tail?

The head shaking could be neurological since you found not ear infection or external parasites.

The Corid won't hurt, so you may want to finish at least 3-5days of that. Since she is not laying (has stopped) is fluffed up, slow, not eating/drinking well and is isolating herself - I would lean toward a reproductive disorder.

I leave early in this morning, but I'll try to get a picture of her before I leave.
Eggs: she was doing fine. Our other hens that had internal laying problems (we've had 2 now) were laying thin-shelled eggs before they succumbed to the disease. Indie's have been beautiful. I checked to see if she was egg-bound early on, and she wasn't. I'm sure she'd be dead by now if that was the case. I checked her abdomen early-on too, and felt nothing out of the ordinary, but it's been a week so I'll check again this morning.

I am actually worried about the reproductive disorder as well... she's so young and that makes me so sad!

It's not looking good at all. Here are pics of her, one (the one where her tail is almost straight up) when she just came out of the coop. The other is after a few minutes. I tried to upload a video of her but it didn't work and I don't have time to mess with it right now.

My daughter has been the one catching her while I do the examination. This morning is the first time in about 4 days that I actually was the one to pick her up. She weighs next to nothing and her breast bone is way to prominant... she's starving.

Her fanny is a little poofy - nothing like our Henrietta in her last days, but not like a healthy bird either. I think I'm dealing with EYP. I am SO sad!! She's my girl that talks to me every time I go down to see them. 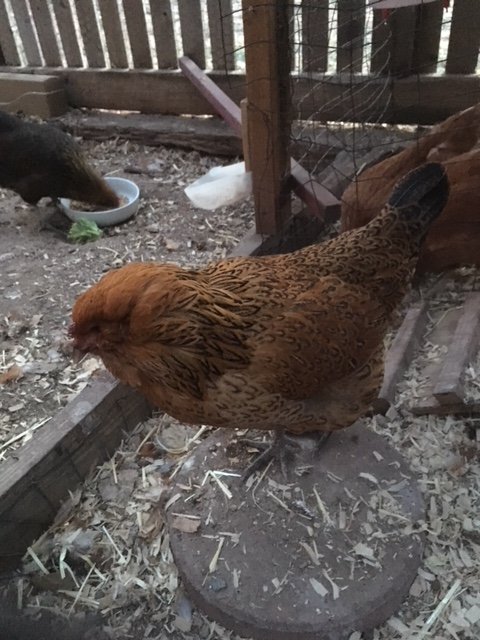 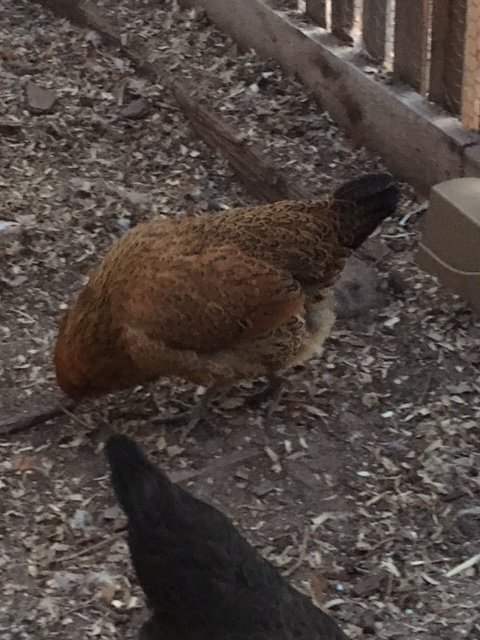 Will she eat better if you hand feed her?

I'm very sorry that she is not doing well, the weight loss is alarming, unfortunately, that is also a symptom of EYP or similar. It's so frustrating to not be able to make them better.

B
Month-old chicken keeps shaking head and has watery droppings!

Help - Chicken shaking her head and not balanced