Heat Lamp, Temp, and Other Questions

Hello! So I hope to be starting a flock of chickens in the next couple weeks, and I have a couple questions! I would like to get 7 Speckled Sussex chicks but have never had any type of poultry before! I have done lots of research but I need a little bit of help still!

Here is the orange bulb: 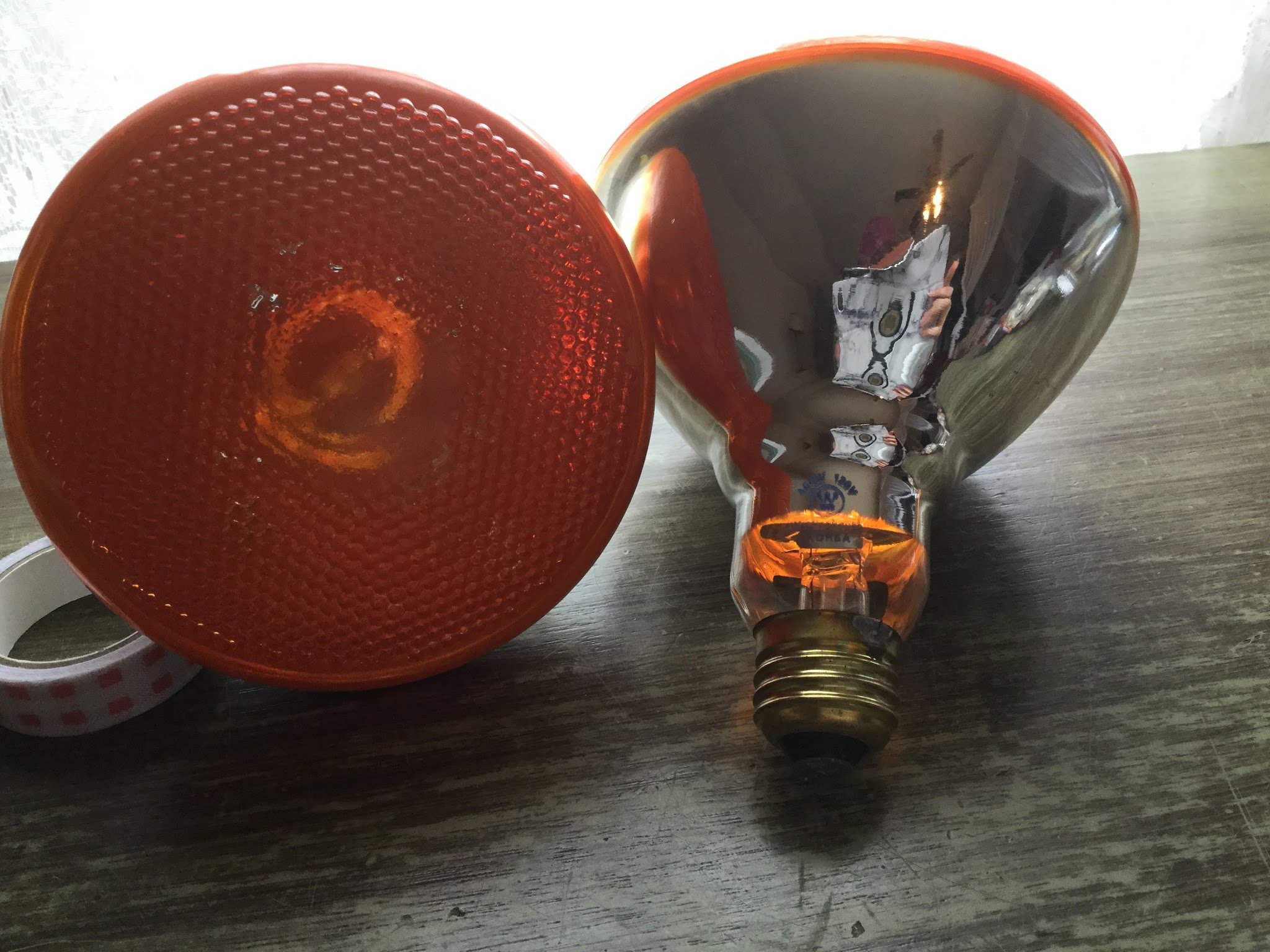 Thank you so much for all your help!

A far safer, effective and natural brooding system for chicks than any lamp is nothing more than a wire frame and a heating pad - one that doesn’t turn off automatically after a couple of hours or let’s you bypass that feature with the controller. Yep, a people heating pad - nothing fancy or special.

I’m not on my computer at the moment but either google “Mama Heating Pad in the Brooder” or enter that in the search box in the tabs above. I won’t ever brood chicks any other way.

I brood outdoors, as do many others, using Mama Heating Pad. Even in our “springtime chick season” temps of 20s, dropping into the teens here in Northwestern Wyoming, they thrive, and are off all heat at the end of their 4th week. Again, using either the search tab or google, look for “Yes You Certainly Can Brood Chicks Outdoors”. I’ve done 8 batches of chicks this way.

It’s as close to duplicating a Mama Broody Hen as we can get. It’s dark. It’s soft and cuddly. It’s warm. She doesn’t heat the entire space the chicks are in. She’s just “there” and they duck under her for a few minutes and then they’re back out exploring, even in cold temperatures. Chicks NEED to able to get out of the heat rather than be in a box at 95 degrees, and mine are living proof of that. She also doesn’t have a night light under her wings....when the sun goes down they snuggle under her and sleep quietly with her until the sun comes back up. She doesn’t let them eat 24/7....those little digestive systems aren’t designed or mature enough to handle being stuffed all of the time. They fill their crops in the evenings, then settle down and digest that during the night. All of that is what Mama Heating Pad accomplishes too.

I believe in Mama Heating Pad. If I didn’t I wouldn’t recommend it as highly as I do. But I also must be totally up front and say that there are also commercial brooding plates that do almost the same thing. Well, except they aren’t dark under there during the day. Or soft. Or cuddly.

And a Mama Heating Pad is a fraction of the price, plus it’s washable and you can use it on you the rest of the year.

BIG CAUTION HERE - Don’t use an older pad that you have rolled up or folded in the back of a closet somewhere. After years of that, the heating element wires can become brittle and get small cracks or even breaks in them, shorting out when being used. When you’re using it on yourself for a few hours, you’d notice a problem instantly but if it’s being left on continuously and is out of sight in another part of the house or an outbuilding, it could be hours before the issue is noticed and could be too late.

I know I haven’t answered all of your questions, but I think I did give you a viable alternative to lamps and gave you a way to keep your mom from breathing in all the dust and dander. Someone else is bound to chime in with those answers. I had 2 Speckled Sussex, but I got them locally. Most mail orderhatcheries can ship them to you, but if you can find a local breeder you’ll be so much better off.

Welcome to BYC, now that I’ve literally overloaded you with information you didn’t even ask for! But you’ll get to know me....most anyone here can tell you I tend to get wordy from time to time. Well, okay, most of the time!

Welcome! The reason for using a red light is because the chicks need the heat 24/7, and white light will prevent them from resting as they should at night.
BEWARE of random source lamps, not labelled for birds. Some bulbs are Teflon coated to help prevent breakage, and they will kill your birds! If you are in doubt, pick the safe choice at the feed store.
Towels in the brooder will be a mess in a day; plan to use bagged shavings (not cedar) or maybe pet potty pads as a second choice. You need enough space in the brooder for the chicks to have a warm area and a cool area at the other end of the brooder.
Set it all up at least a day or two before they arrive, with a thermometer under the heat lamp, so you know that the temperature will be fine for them there. If you get a heating pad as a brood plate, set it all up early too. It may struggle to keep the chicks warm enough at freezing temps.
Mary

Wow! That is a great idea! That really DOES seem like a wonderful (and more natural) option for warming the chicks! Thank you so much for all the info, I looked up your other article and it was very informative! Now I am off to go find a heating pad...

Kale Chips said:
Wow! That is a great idea! That really DOES seem like a wonderful (and more natural) option for warming the chicks! Thank you so much for all the info, I looked up your other article and it was very informative! Now I am off to go find a heating pad...

@Folly's place is absolutely right. They do need heat 24/7. But the difference between lamps and MHP is that the chicks regulate what they need and decide when they need it rather than just letting the lamps and charts tell them. Mama Heating Pad works by warming the chicks directly, with the heat right at their backs, just as a broody hen does. If they want it, they go get it. It does not, nor should it, try to warm the entire space the chicks are occupying. But I don't believe they need lights 24/7. I believe that natural day/night cycles are just as important as heat. That doesn't mean that either of us is "wrong". We each just have our own way, and don't mind talking about those ways. If there was only one way to do this, this entire website could be read in half an hour!

As for looking for heating pads, I recommend the Sunbeam X-press Heat. You can usually find them at Walmart or at any of the major chain drug stores, but here's a link to the ones on Amazon.

Also thought you might enjoy seeing a video of my chicks outdoors. It had warmed up to 38 degrees, if I remember right, and had been raining for a couple of days straight. The batch just before that, already integrated with the flock at 4 weeks and not needing heat anymore (their choice) but it was in the 20s when they were out there, doing exactly as you see these chicks doing. By the way, you may hear me refer to the little chick that died. She did. Somehow she managed to find the only weak spot in the brooder and squirt out. I didn't find her until we were doing chores and realized we had an escapee. We found her tucked way behind and almost under the dust bath bin - cold, stiff, and looking totally lifeless. I grabbed her, ran inside and stuck into the incubator with the eggs I had in there, and the second she showed signs of reviving I laid a heating pad on the counter covered with a towel, tucked her into it, folded the ends over her and within hours she was back out with the rest and I could barely tell her from the others!

She grew up to be a beautiful White Orpington, a steady layer, and just as friendly as all the others were as adults.

I love this particular video because it's obvious that I'm standing between them and Mama Heating Pad, and they are convinced that I'm going to eat them alive! They are cheeping loudly and cramming into the corner trying to get away from me. As soon as I move slightly, they make a beeline for the security and warmth of "Mama" and it's like instant quiet!!

Your chicks are absolutely adorable! And the peeping

!! You're right, they sure made quick work of crossing the enclosure to reach the safe cave

Thank you so much for the extra advice!

When shall I remove heat lamps?