I have a beautiful baby chick that looks completely healthy, except that she hops on only one foot and holds the other one up. It looks like it is twisted at the very top. She can move it, but it obviously pains her to put it down. She hops around with one wing open, covering the leg. She is only two days old. Is it broken? Should we try to splint it?

I have a pic, but I cannot figure out how to post pics on here.

Can someone help me?

Upload it on photobucket.com then use the image code. It sounds broken...

I have a three day old chick doing the exact same thing! Can't figure it out! I will be watching for your results. It is breaking my heart.

This is "Gimpy". She was born this way. It is not splay leg, as I am using paper towels. Is it broken? Can I help her? 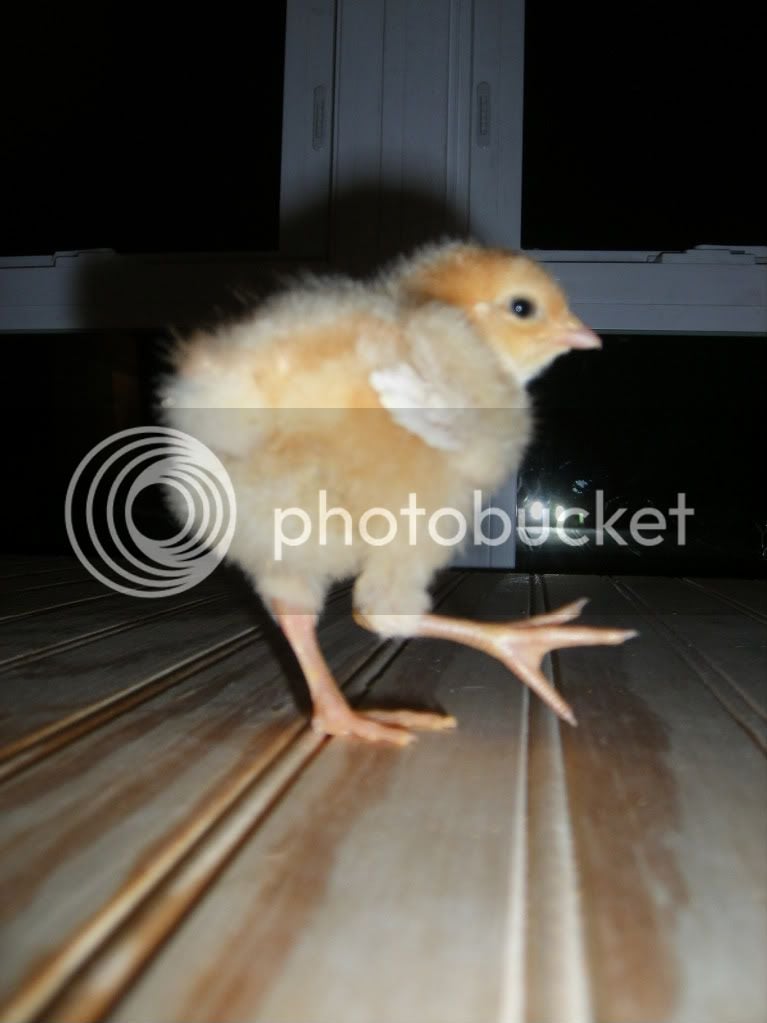 I would splint it with something with just a little bit of weight. I would fix it now, not wait. I fear it will be picked on by others when the pecking order is forming.

Also, I don't think it's really broken, I think it's a deformitie. If it's a hen, I wouldn't let her hatch eggs, to avoid other issues in young. If you can't fix the leg,you may look to the quality of life. If it's good, then she may be fine if not, that's a personal choice

If it's a deformed leg, will splinting it help it at all?

I've had several tries with this...none of them good.

Although I hate to admit this, most of the problems were from those that were raised naturally, with hens sitting on their fertile eggs. I guess it was a problem with irregular temperature control. However, for these chicks, they were never able to feed/drink properly, so I was forced to euthanize them, which was very, very upseting.

Then i got a batch of 500 chicks from a commercial hatchery, and one of those had a deformed leg. I tried everything I could to try to fix the problem, but nothing worked.

Because she had a deformed leg, I kept her separate from the others, except with a couple of "friends" for company, and she did OK. I kept so much food in that area that there was no competition for food, but she never grew well, and was always hiding off in a corner. By 3 months of age, she was less than half the size of the other birds, despite food ALWAYS being available and in several different places.

She just eventually died from "failure to thrive". Probably, if I hadn't taken such "heroic" measures, she'd have died in days-weeks of being hatched.

Anyway....I hope you have better luck than I did, and if your chick's leg is broken...it CAN be fixed.

It might help, but the chick will never be normal. It depends how much time you can devote to this one chick. If you have 4 chicks, you might be able to handle him, but if you can't seperate it, make sure it's always okay and able to get around properly, it may be best to cull

A
Chick with injured leg

L
Help- is this a broken leg?