Hello! First time chicken owner!!
I need some help so if anyone has any recommendations I will be sure to try it. So I have a young polish hen who was perfectly normal until she was about 14 weeks old maybe. First off I had a incident that this same hen was perching around dawn & fell off her perch straight into the wall & completely knocked herself out cold. I saw this happen so I quickly ran down there and grabbed her up cus I literally thought she was dead because she was not moving at all and her wings were spread. When I picked her up she was still out cold but I quickly got her into something safe and brought her inside. She SLOWLY started coming out of it. She was given a boost of hydration & vitamins/probiotic & left to take it easy overnight, inside. The next morning she was back to normal like nothing happened.
Now, fast forward to now. For the past week or two I have noticed her acting quite strange. I am going to post some pictures as well. I am not sure if this is a crop issue or not but she won't extend her neck. It's very off center sitting on her shoulders basically. I hope you can see what I am talking about by my pictures. In the pictures you can clearly see her head offset. Idk she has a crop issue because I feel like her head being the way it is would just make it look bigger than it really is. She has not lost her appetite whatsoever. But it definitely is more prominent now so its tough to really tell. I am hoping someone here has experienced this as well.
I've had friends that have chickens come check over her & they haven't dealt with this before. I heard it could be impacted crop BUT that wouldn't explain the head/neck ordeal. Then, I've thought "crooked neck?" BUT she isn't stargazing or looking all cock- eyed. Could this have been a result of what just happened to her over a month ago?

one thing to know also is that this was not immediately following her knock out, this started over a month later. And if it was gradual I didn't notice. She is able to move it fine, extend a little to eat & drink (but not real far) and she's had a puffed up, tail down appearance as well....
*I would appreciate any information or tips or a good how-to!*

Can you taker a video, upload it to youtube or vimeo then copy and paste the link here?

I know that polishes can have vaulted skulls that are part of their crests. Vaulted skulls can make a bird easily susceptible to brain damage. If she hit her head, that could be part of the issue? 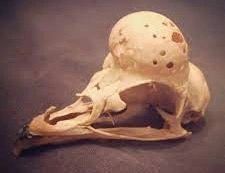 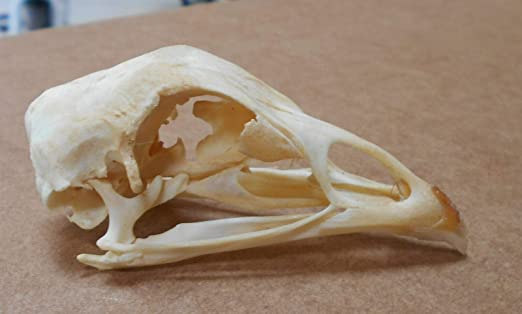 Here you can see the difference between a vaulted skull and a non vaulted skull. The 'bubble' part is quite thin and can have holes in it, as you can see, which makes it that an unfortunate hard peck in the right place or a knock on the wrong part of the head can be very damaging.

Seeing her action would be good, but I don't see any harm in treating this like Wry Neck. Give 400IU Vitamin E along with 1/4 tablet B-Complex daily. A little treat of egg will help with the uptake of E.

Can Sour Crop Cause Seizures?
2 3

M
Hen bringing up everything she eats. 12 days after injury by hawk