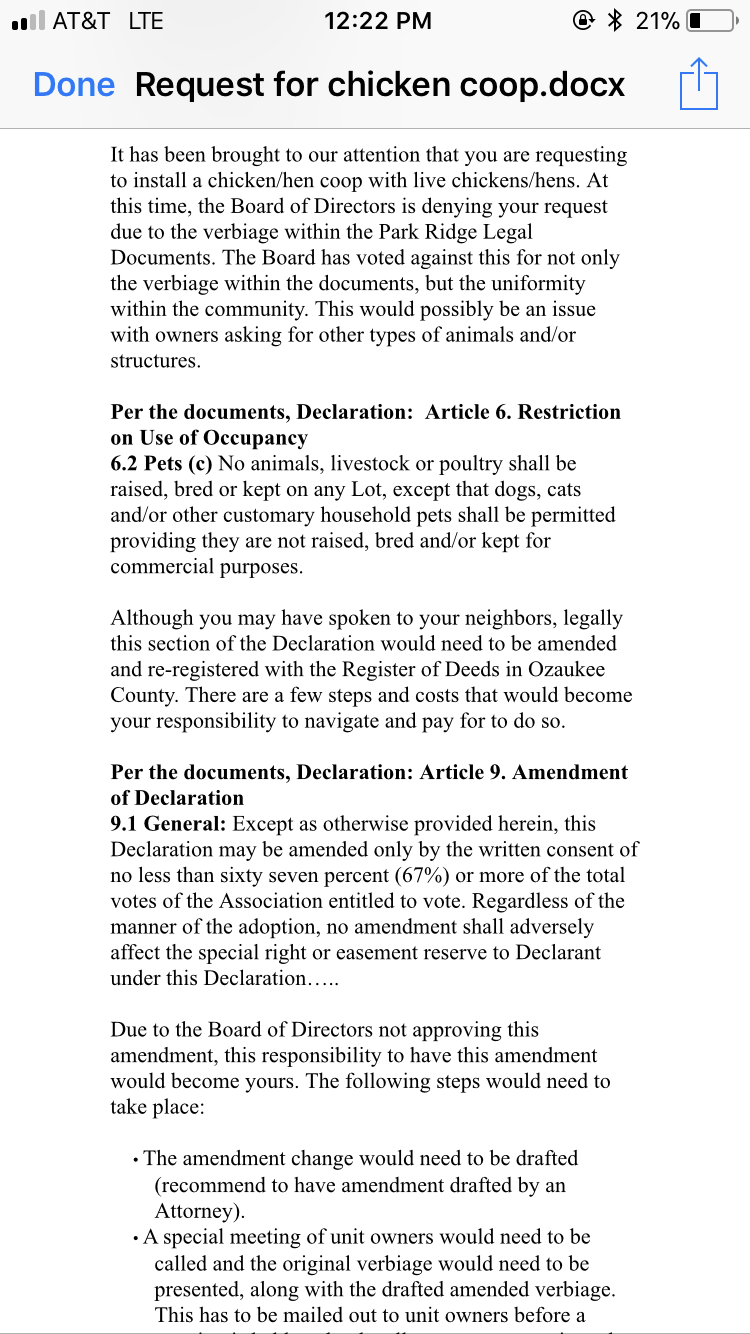 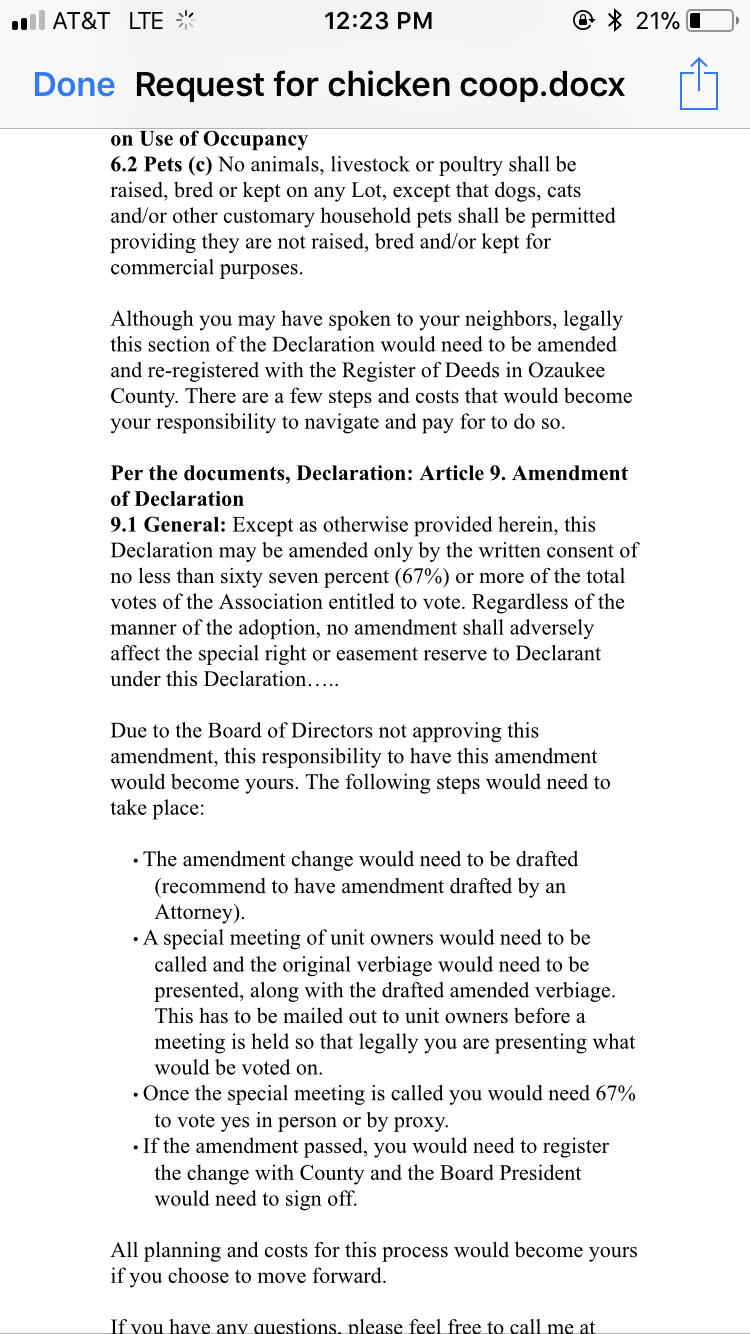 So I found out this week I might go blind and or need brain surgery (I’m 34) so if I seem grouchy that’s why. Comments like you shouldn’t have/that’s why I didn’t move into a HOA are not helpful. Neither are comments that I’ll never succeed and just wait until I can move.

I live in my forever home in the suburbs. It does not allow poultry via the HOA but 4 hens are legal in our city. Our HOA consists of 11 homes. I have spoken to all of them about the chickens by going door to door. 9 said yes 2 said maybe. I got this email today. Does anyone have any tips/advice/helpful info/amendment drafting ideas? The thought of having chickens in my future is all that’s getting me through this unexplainable brain condition I’m having currently. I really don’t want to just give up. Especially when my neighbors have been so positive about the chickens. Does anyone have any idea of the costs of filing an amendment?

Honestly even encouragement would be helpful at this point.

I'm so sorry. I don't know how much you can do besides what you have done in this thread:
Legal in city illegal in HOA.
I don't live in an HOA, so I have no idea how they work or how one would go about changing the rules.

Where would one file an amendment? That's where you would ask what the cost would be, I would think.

I can not give any advice, but please know that I am sorry to hear about your condition. I wish you well.

Sorry... HOA subdivisions are nowhere I would want to live in.
Paying taxes and owning your own home, then people telling me what I can or cannot do. That is why we moved to the rural country... We chose not to live in "cold war Russia"..
Best of luck.. I am afraid you have your hands tied.

I am so sorry... I don't know how to help... I hope someone can, it is sad to me how heartless people can be.

you are the blue one and they are red!!!!

I think you're on the right track, it's just that you're not as far down the path as you thought you were.
You've spoken to nine of your neighbors, and they are in favor - or at least, they say they are. You need to touch base with them and make sure they're still on board.

Then, as the letter you got from the HOA suggests, you need to draft a proposed amendment to the HOA documents.

You need to circulate that amendment to the other homeowners for their input.

If enough of them continue to green-light you, then you call a special meeting to propose the amendment and get it voted on.

Now, since everyone's inevitably busy, and attending an HOA meeting is about the last thing on their mind, the easiest way to pull this off is to collect a written proxy ballot from other HOA members ahead of time. If you collect enough of them up front, you walk into the meeting assured that your vote will pass.

You can do this. It's just a little harder than you originally thought it was going to be.

I am so sorry to hear of your condition. I wish you the best of luck.
My parents own a few properties in Idaho and I know a few are in neighborhoods with HOA. It depends on the HOA, some will more readily enforce it the others. But I would try to amend it or tell them your specific case. Maybe get your neighbors to sign a petition? Oh! Maybe try to get the chickens as 'emotional support' pets. Not sure how that works in your state, though.

If you re-read that letter that the HOA sent you - they're basically outlining the steps you need to take to get to success.

I would move the poultry and specify how many hens.

No animals or livestock shall be raised, bred, or kept on any Lot except that dogs, cats, chickens (up to 4 hens) and/or other household pets providing they are not raised, bred, and/or kept for commercial purposes.

bjmoose said:
If you re-read that letter that the HOA sent you - they're basically outlining the steps you need to take to get to success.
Click to expand...

You are right. It does. I was just expecting a totally different response and was discouraged. I’m still working on it. I was just hoping people had experience writing amendments and might have tips etc

N
HOA and My Pullets. Need HELP!!! Meeting Will Be Soon
2

Moving in Metro-Detroit with Hens