Help needed... I think my hen is stressed!

I currently have two hens and a cockerel who free range in our garden. They are all the same age at just a year old. We also have another hen who is broody at the moment, so she only comes out for 10 minutes per day. Earlier this month we lost another hen to unknown causes.

So basically, the flock had gone from 4 hens plus a cockerel to 2 plus the cockerel.

I think one of our hens is stressed. She is a booted bantam (sablepoot), so quite small. She went from being second in the pecking order (when there was 4 hens) - to being lowest with just the 2! The other hen is a welbar bantam and I think she is a bit of a bully. She was always top of the pecking order, and rather than assert her top position with a glance or noise, it’s generally with a peck.

Anyway, the booted bantam is a fairly good layer, and we usually get 4 or 5 eggs from her per week. She has always been quite “mardy”, and makes a lot of fuss and noise before she lays. She has even taken to laying in a makeshift nesting box inside. This has been for several months.

However, she hasn’t laid for the last 3 days, but has made the fuss and nose each day where we expect an egg. We have put her in the makeshift nest box, and she has sat for an hour or more but no egg.

Today was the same so we put her in the nest. We went to check up and suspected she could be broody as she had pulled out about 15 or so chest feathers. We thought this might explain her not laying - so we put her back outside to try and break the broody!

Anyway, she carried on with the shrill noises, so I put a couple of plastic eggs in the outside nest box. She went straight in - so again we thought “broody”.

But, an hour or so later, she had laid an egg! So now we’re thinking “not broody”. The egg itself had quite a few dots of ‘shell’ resembling sand on the outside which I think can be a sign of stress.

Her behaviour also makes me think she could be stressed. Hard to pinpoint but she is spending more time alone. She sometimes gets over mated and has lost a few feathers on her back in front of her tail.

I realise that we don’t have a great ratio of hens to cockerel at the moment, which is why we are letting our broody hatch some more - but they won’t be ready to integrate for several weeks after they have hatched.

I am in the process of building a run for the cockerel to see if that helps. But does anyone have any other ideas? Are there any natural remedies for helping relieve stress? Or any suggestions for dealing with a bully hen if that could be a cause of a stress issue?

With so ‘few’ chickens, I’m actually not sure who to move/remove if we do have an issue.

Sorry for the long-winded post... wanted to try and capture everything.

Do you still have the egg? It may help if you post a picture of it. If you do remove a chicken, don't remove the chicken that is being bullied. Once you put her back with the flock, she will be picked on even more. Instead, remove the bully. Making sure to provide plenty of food and water (maybe have several stations), have clean bedding, and providing plenty of space in the run and coop, including adding perches or things for your birds to jump up on to escape bullies in the run should help as well.

I’ve attached photos of the egg, with the sand-like addition on one end. I think I read somewhere that it can indicate stress.

Yes I agree and don’t intend to remove the hen who might be getting bullied. But don’t know if I should remove the cockerel or potential bully hen.

The chickens have a coop where they sleep and then free range in our fairly large garden (probably 20m x 15m). There are trees, bushes, plant pots, behind sheds, under shrubs, added perches... I feel like there are lots of places to ‘hide’ if necessary. That is one reason I find it so strange. They have a food station, where there are several feeders, and several water stations around the garden. I could be wrong but I can’t see that it is environmental. 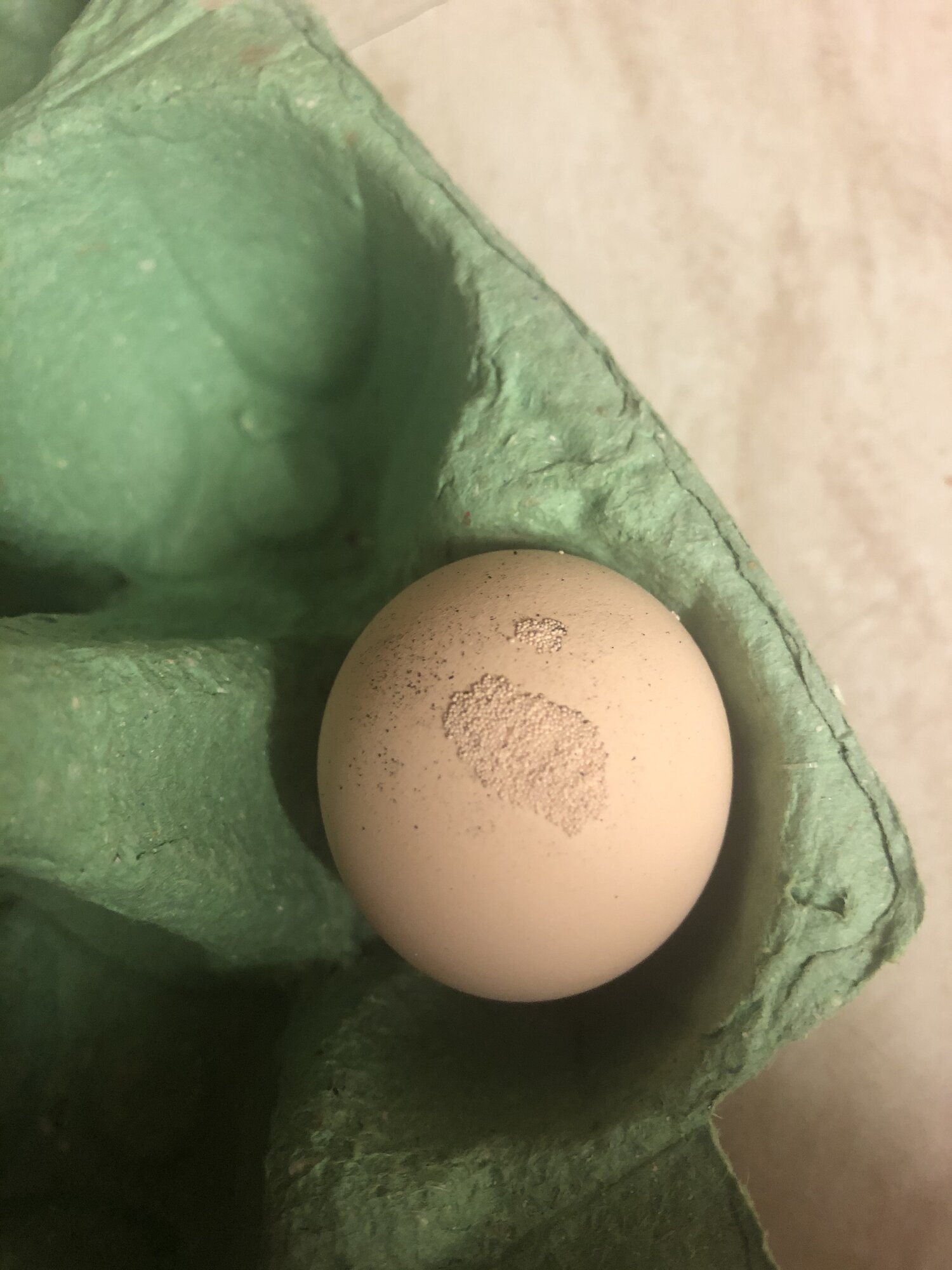 for some reason I am not seeing any pictures of the egg. Anyway, I do not keep roosters, but some people I know do keep their rooster in a separate, smaller coop for the majority of the time with the run separated so the hens and roosters can see each other but the hens don't get over mated.

Sorry I edited as forgot to add the egg photos.
Thanks for the info. It sounds like over mating may just be a general “thing” with roosters. If it comes to it, we may have to find him a new home. He’s generally a good boy - finds food and nesting places for the girls - very good around us - friendly - just very keen to mate in the evenings.

Do feed your chickens lots of calcium? That looks like a calcium deposit on your chicken egg, which can be caused by excess calcium or stress during the calcification process.

Not intentionally. They have layers pellets for feed, then cracked corn and sunflower seed kernels for scratch, plus occasional treats (various including mealworms, cheese, yoghurt, grapes, meat scraps). We always have a separate bowl of crushed egg shell and oyster shell available as the current broody laid a couple of soft shell eggs a few months ago.

I couldn’t say if the booted bantam takes too much of the crushed shells, but I know she pecks it.

Yes I had read that could be a cause of the calcium deposits. Should I remove the free issue shell?

Do you know if there is anything to include or exclude from their diet to help with a potential stress issue?

I would highly recommend to keep providing the oyster shell, as they do need it for the eggs. Keeping treats to 10% of their diet (If your chickens each eat 1/2 cup of feed every day, then that would be about 1 tablespoon) can help. Generally, stress is less likely to be caused by their diet, and is more often caused by over mating or bullies. It could also be internal or external parasites, trauma, or sudden change in diet.

Thanks for your help. Those feed proportions sound about right for what we do.
I can’t find any signs of external parasites and have brought a ‘wormwood’ natural de-wormer, which I will give to them in their water.
I guess I can put it down to the cockerel and/or top hen then. I’ll finish the run today and try isolating the cockerel and see if she improves. I can’t see any of them liking it very much though, especially as it will leave our booted bantam with the top bully hen alone. If that doesn’t work, I’ll try removing the bully instead, although that will then leave her alone with the cockerel.
I can’t believe my chicken math has turned out this way!

She's just stressed from the flock member loss and maybe the broody.
I wouldn't worry much about the excess calcium bumps unless it continues.