I have 4 hens that just turned a year old. Lunesta, my white hen (breed unknown, pictures below), was the first to start laying, but they were always those weird soft-shelled eggs. Since my chickens free-range on acreage (they roost on my porch right next to the front door), I generally have no idea where they lay their eggs unless I stumble upon them by accident. Only one of my hens uses the nesting boxes I built for them. Anyway, I don't think I have ever seen Lunesta lay a proper egg. Possibly an undersized egg with a hard shell in the beginning, but the other 3 hens lay brown eggs and that's all I've ever seen. However, I will occasionally find an exploded soft egg beneath their roosting spot or lying out in the yard.

About 3 months ago, Lunesta became extremely lethargic. I thought she might be egg bound, and since it was winter I brought Lunesta inside for soaks in warm water and confinement with a heat lamp. She improved quickly but never laid an egg during the week I had her indoors. She's been doing great since then, but a few days ago I noticed that her bottom was disgracefully dirty (with dark poop), so last night I brought her inside for another warm bath to get her cleaned up. She has always been a quiet bird, but she seems more subdued than usual, and last night I noticed that her stools were very watery, and one of them appeared to have yolk and albumen in it. She is eating and drinking okay, but she is still having watery stools. When she's awake and walking around, her tail is perked up, but she gets droopy during her naps.

Any advice? I've done a lot of research here, but I am still unsure as to what exactly might be going on with Lunesta. NOTE: I have never wormed my chickens. I have checked them for mites and found none. The other 3 hens are perfect pictures of health with no history of any problems. No recent changes in diet or environment.

EDIT: After further reading I think it seems likely that she is an internal layer. Am I correct in thinking that there's really nothing that can be done for this? 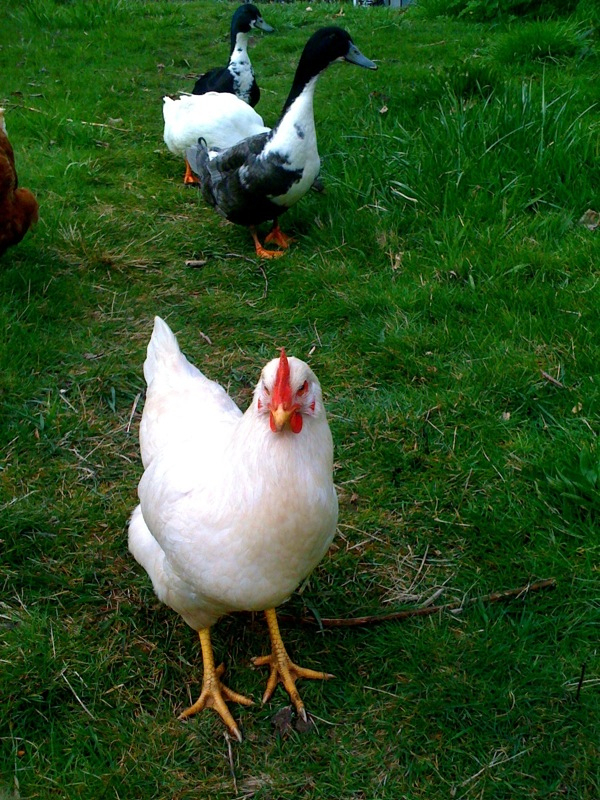 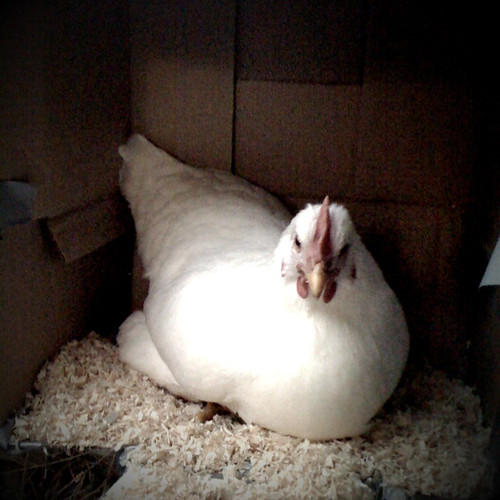 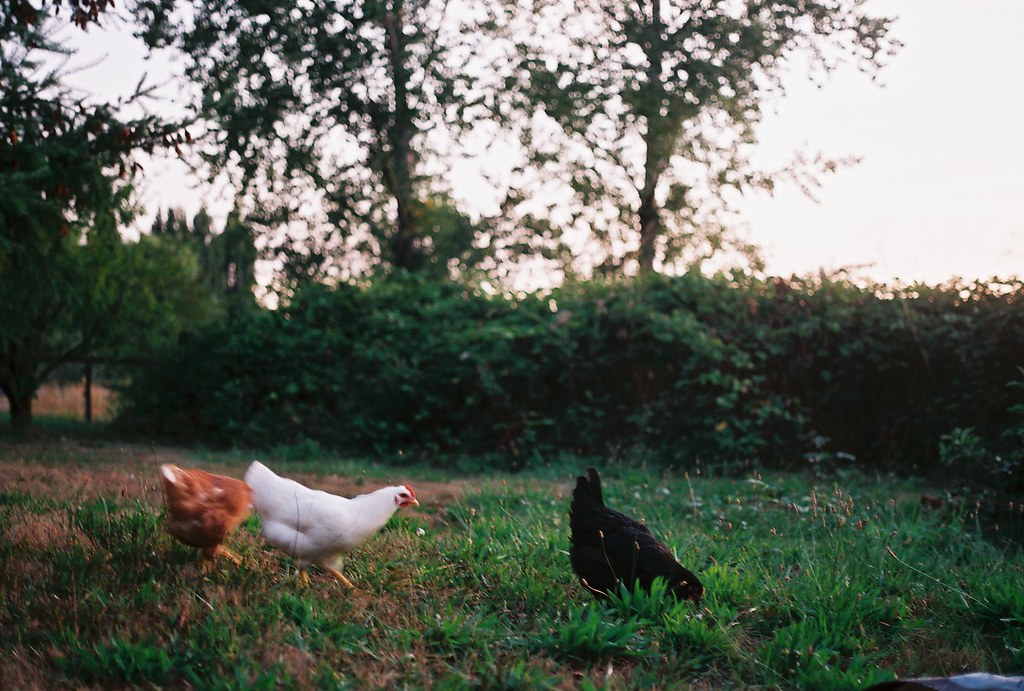 I thought I'd update on Lunesta to see if some additional information might yield some ideas.

Her condition has worsened. We took her to an avian vet a couple of weeks ago. She was more lively at that point, able to stand and walk on her own, although she was quite subdued. The vet examined her and ruled out egg impaction. Lunesta was already underweight by that point. She had several loose stools in the exam room, and the vet explained that what I was mistaking for egg yolk was actually yellow urine. They took stool and urine samples for testing, and we were informed that Lunesta's kidneys were badly out of whack. No signs of worms or other parasites in the stool, though. We tried to figure out if Lunesta might have gotten into something toxic (specifically, plant fertilizers), but I don't use any chemicals in my yard. Additionally, as I mentioned before, my other 3 hens are robust and vibrantly healthy.

We were sent home with Clavamox and advised to contact them again if Lunesta didn't improve -- if the antibiotics did the trick, we were to expect her to perk up quite quickly. Unfortunately, that didn't happen. I took her out into the yard for a little while the following day, and she barely walked around. I dug up some earth for her to peck around in, and she did so halfheartedly. When the other hens went over to the feeder, she joined them and actually showed some interest in the food for a brief period, particularly the black oil sunflower seeds. As the days went by, however, she showed no real change for the better. Nothing I offered to eat seemed to tempt her. She would eye it with interest but wouldn't do more than peck once or twice at the tidbits. We took her back to the vet, who recommended admitting her for fluids and support. She stayed at the vet for two days and was started on metronidazole; apparently the antibiotics were helping her, just not enough. The vet said Lunesta seemed brighter, just not bright enough. She passed a few solid poops, but this was after 2 days of force-feeding and flushing with fluids.

We brought her home and continued the course of metronidazole, but Lunesta has continued her slow decline. I would do anything for her, but I am literally tapped financially. I have continued to ply her with all kinds of special food, and it's difficult for me because she really does seem interested in the food, but in the end all she will do is take a few pecks.

Her stools are still loose. I have seen no signs of parasites or mites. She has never had any difficulty breathing. No discharge from the eyes or nose. No panting or outstretched neck. From time to time I have seen her sitting quietly with her beak slightly open, and the other night she kept shaking her head like something was tickling her, but it's not constant or even a daily occurrence.

I have been feeding and watering her by hand, putting food directly into her mouth and giving her water with a syringe (although she will sometimes drink on her own). Most of her diet has consisted of a wet mash made from crumbles mixed with Pedialyte. I give her a little bit of plain yogurt every day. I've also offered her scrambled eggs, hard-boiled egg yolk, pasta, fresh fruit, and canned cat food (beef). She is a HUGE fan of the cat food, but she will only eat it of her own accord if I take tiny little pieces of food and line them up in front of her. Even then she will only take 2 or 3 bites before losing interest.

I am beside myself at this point. I don't want Lunesta to suffer, but the moments of brightness and alertness, the moments where she is extremely interested in her food, are causing me a great deal of conflict. I don't want to give up on her if there's a chance she can recover, but like I said, I don't want to cause her to suffer needlessly due to my attachment to her.

I guess I just feel like I don't have a clear diagnosis for her; that's what frustrates me the most. It appears to be kidney related, but her medication didn't work. I'm half tempted to try worming her with something mild, but her weakness worries me. I don't feel she can handle very much stress to her system. If anyone has any ideas or theories, I would very much appreciate them.

All I can say is sorry! I'm in the same shape. Favorite hen. Good layer. Heat exhaustion last Sunday. She hasn't walked since. We are giving her every treat we can think of to perk her up, hand feeding her, cleaning her up, but no improvement. My husband and I made a promise that Monday would be it. We can't do any more. We are sad, as I'm sure you are. I'm just writing to say this. You have given her a great life. She has been loved enough to be brought in the house, and hand fed and bathed. She has been a lucky chicken and you have been a wonderful chicken mom. If you have to cull, or she passes, just remember that you loved her and gave your best. She wouldn't ask anymore of you than that. Good luck!!

Hen not getting any better
2

Looking for help with sick chicken