Help! We need Recommendations/Thoughts on these items for chicks?

My daughter has always used traditional heat lamps, and waterers for her chicks after she takes them out of the incubator and puts them in the brooder...but her past few batches have been terrible, because the heat lamp will die in the middle of the night, the chicks will get cold, and die. She wants to try these for her summer hatches, because she plans to breed and sell chicks in the summer and doesn't want to experience heatlamp issues again. So should she get these 3 things? What reliable heat source do you use for continuous hatches? What do you recommend for chicks? Will heat plates stay on/safe/warm if they are on for weeks at a time? She also just needs your overall thoughts on how to have the healthiest/happiest chicks..? 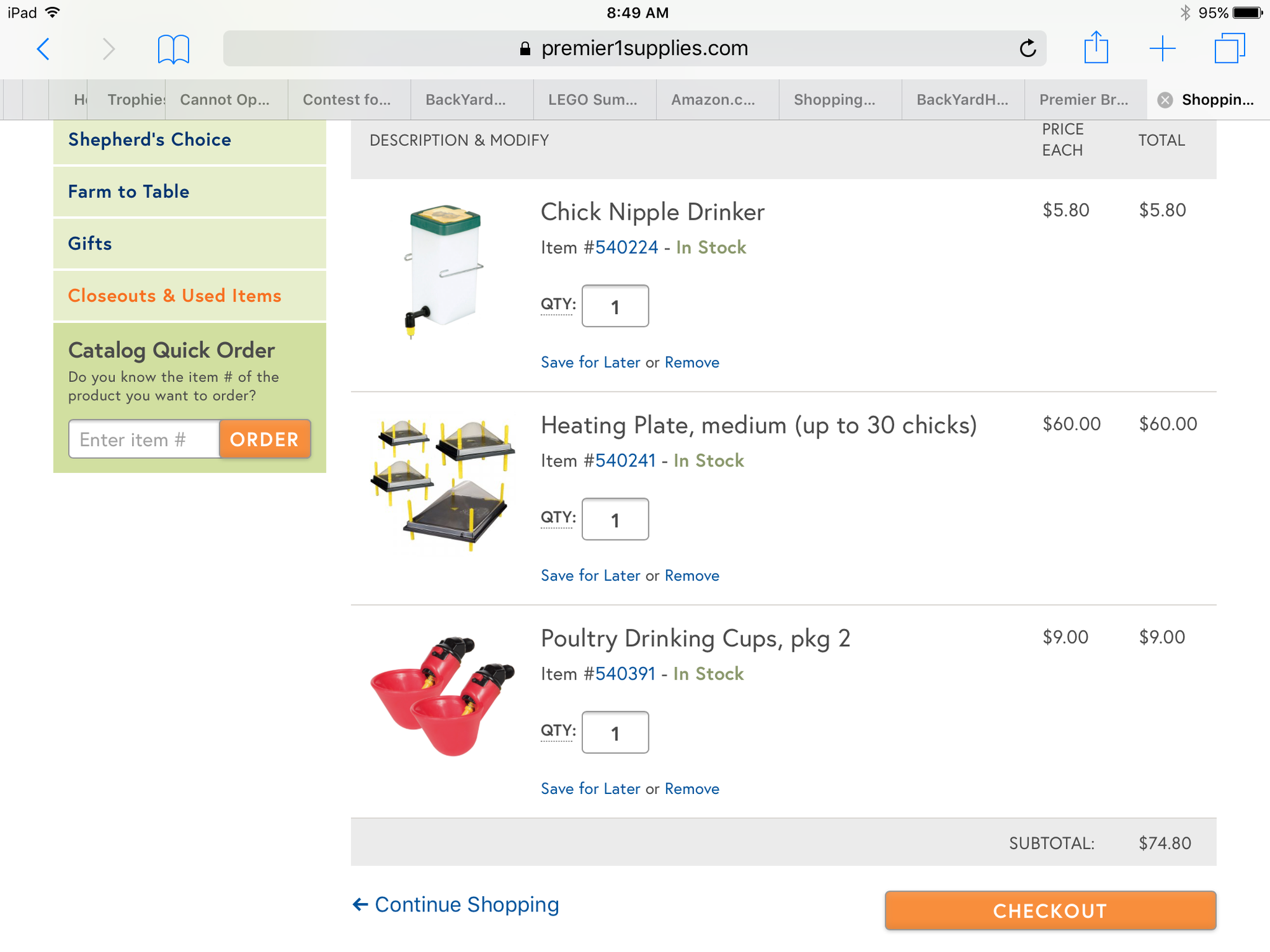 @Blooie Has got you covered. She helped me through my first batch of chicks and shared her unconventional method of using a heating pad to create a little warm cave for the babies! You can search MPH (or Mama Heating Pad) methods and find her thread, or maybe she'll chime in. But this method worked beautifully for my chicks, and I would highly recommend it!

Great! Thank you. My daughter has had chickens for the Past 6 years, and did tons of successful hatches/raising and such using heat lamps...but this past year the heat lamps have been absolutely on un-reliable.

I have used heat lamps for years, and always check them frequently, and have at least one backup bulb and lamp available.
Last summer I used Premier's heat plate for the first time, and liked it a lot! Do plan on getting one that's larger than the minimum size for the number of chicks planned!
I haven't done a home made heating pad brooder, although done well, they work too.
Having anything electrical on a surge protector pays off! If that's what is killing her heat source, it will make a difference.
My concern here is about an actual power outage, and having an emergency arrangement at a friend's house where the power is on is also important.
I've done fine with the 'old style' waterers, starting with the smaller size and working up to the big ones as they grow.
I'd recommend the brooder plates, for sure! Larger, not smaller size.
Mary

Little Farm Girl said:
My daughter has always used traditional heat lamps, and waterers for her chicks after she takes them out of the incubator and puts them in the brooder...but her past few batches have been terrible, because the heat lamp will die in the middle of the night, the chicks will get cold, and die. She wants to try these for her summer hatches, because she plans to breed and sell chicks in the summer and doesn't want to experience heatlamp issues again. So should she get these 3 things? What reliable heat source do you use for continuous hatches? What do you recommend for chicks? Will heat plates stay on/safe/warm if they are on for weeks at a time? She also just needs your overall thoughts on how to have the healthiest/happiest chicks..?View attachment 1624726
Click to expand...

Years ago, I switched from traditional heat lamps to ceramic heat emitters (like those used for reptiles) that you can get in wattages from 50-300 depending on needs. Putting two in the brooder will prevent loss if one goes out. The ceramic ones can break but they are much more durable than the glass ones and are more efficient.
That said, I finally switched to the Premier1 heat plates and I love them. They are very reliable and much more energy efficient. They will save their cost in the first brooding over the energy used by a 250watt heat lamp.
I still use the ceramic emitters in a hover type Ohio brooder if I'm brooding more than 50 chicks which isn't as often now.
If the building is below 45F the heat plates may not be strong enough.
The nipple water system is good for chicks but being careful it doesn't make the bedding wet.
I love the drinker cups but they don't work in freezing weather and I don't think baby chicks will get the hang of them.

Great info both of you! Do you just plug in the heat placate and let it go? Thank you.

Those are good things, yes.

A note on the heat lamps though: I've had a ton of trouble with them burning bulbs way too quickly. You need to go after them with a flat head screwdriver occasionally. Make sure they're not plugged in (!), take the bulb out, and look down into the socket. See the brass colored metal piece? It has a loose end, get the screwdriver under the loose end and gently pry it up. About 45 degrees, enough that it's at a fairly big angle to the base but can still push the bulb end over it. A lot of them I've bought now have that metal piece nearly flat when I got them. Some will end up staying flat after a bit of use. What happens is, when that piece is too flat it doesn't make good contact with the butt end of the bulb, so it ends up sending current intermittently and that burns bulbs out like crazy.

Thanks for the tag! After a terrible incident with a heat lamp for my very first batch of chicks where my little granddaughter got a nasty burn on her upper arm, I swore there had to be a better way. I looked into the commercial brooders, but just couldn’t justify the cost for something that would be used maybe once every year or two. Then I stumbled across a video by Patrice Lopatin showing her chicks living outside with a heating pad, and EUREKA! I found out that @Beekissed, one of the most knowledgeable, sharing folks ever, also used a heating pad, and learned later that @aart had been doing it too. The Mama Heating Pad is a long one, but just about everything you really need to know can be found in the first post. That has a lot of photos, and toward the bottom is a link to the the page in the thread that explains the way Bedkissed sets hers up, with good photos. Most people now do it the way she does.

So I didn’t “invent” anything - I just documented on BYC the way I was doing it as I went. Some things worked, some didn’t. Basically it’s a frame made of whatever kind of wire is at hand (I used an old bit of leftover welded wire fencing), a heating pad draped over or bungee corded under it, and chicks! The only “requirement” is that the heating pad either not have auto shutoff or a switch that allows you to select “Stay On”. And I never recommend using an older pad that has been rolled up or folded up in the back of a linen closet somewhere. Heating pads used for this are left on continually and we just have to be assured that they they are as safe as possible. For that I use the Sunbeam XPress Heat Pad, available at Amazon. I have two, a small one for indoors for my short observation period, and the large one, which is used when they move outdoors at a couple of days old. The small one I got at Walmart. I keep chicks inside (both hatched here or ordered) until I know they are eating, drinking, know where to warm up, and aren’t suffering from shipping or hatching stress.

The thread is called Mama Heating Pad in the Brooder. I found that chicks raised this way are calmer, more confident, can be integrated almost seamlessly at just a couple of weeks old, and they regulate their own needs. They are comfortable with natural day/night cycles, heading for bed under MHP and sleeping all night through until the sun comes up in the morning. MHP is soft, dark, and warm, just like a broody hen. I raise every batch this way.,,every batch, every time!

I have several short videos of MHP in action so if you’d like to see it at work, I can post one of them here for you. Here is a link to the thread:

That's a cool set up! So you made a homemade one, instead of using the premier1 heating pad?