Hen losing feathers from unknown cause- not molting! (Pictures)

George, one of two of my Rhode Island Red hens (yes, George is a boy name, yet she is a girl), has been (what we thought was) molting for a few weeks. However, her feathers look eaten away and the exposed skin on her wings is white and dry and overall doesn't look good. She doesn't seem to be eating or drinking any more or less than normal. The feathers on her back are fluffy, but no skin is showing. We have one other chicken, Henrietta, (of a breed I don't know) that has fluffy feathers on her back, and her wings look like they're suffering from the same condition as George, only earlier or not as bad. There is no bleeding or scabs. Poop appears normal. We use pine needles as bedding in the nesting box.
Occasionally, neighborhood birds fly into the old dog run we use as a chicken coop to pick at our chickens leftover scraps, so the condition might've come from the visitors. Though I haven't noticed any of them losing feathers, so it might not be that.
We have six hens and no roosters.
Am I just freaking out over extended molting? 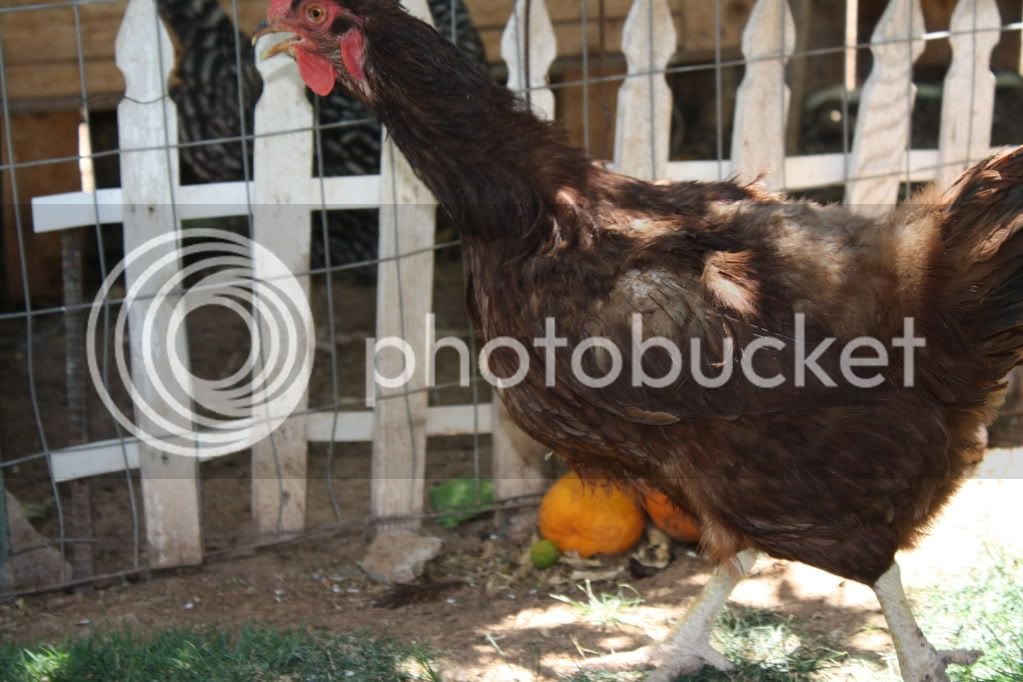 George again, back and wings 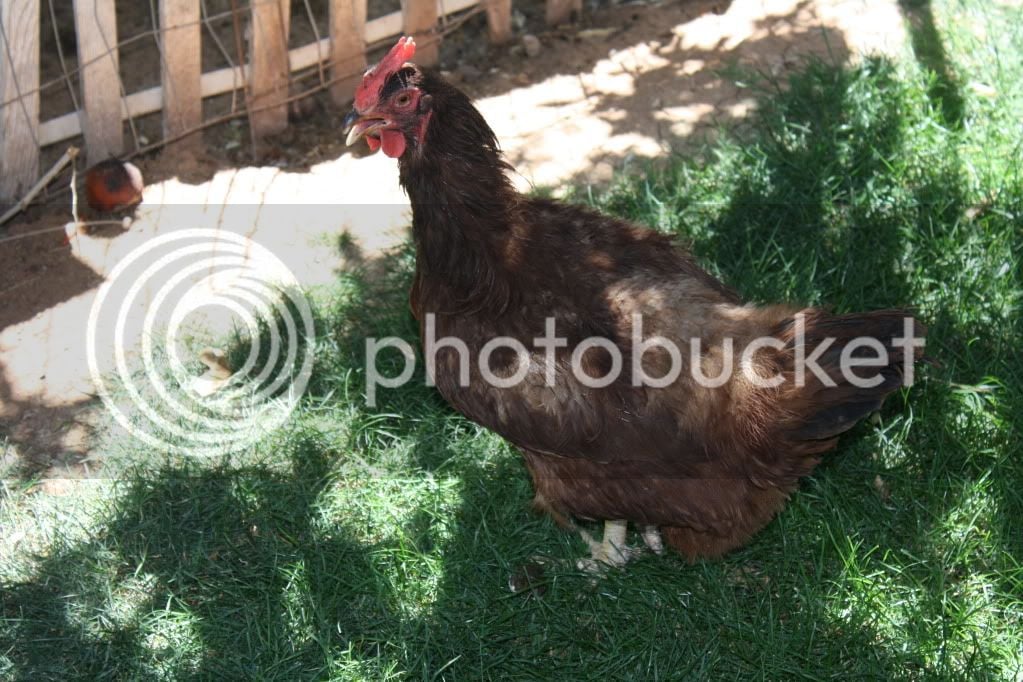 Fred being normal like a good chicken ought to be 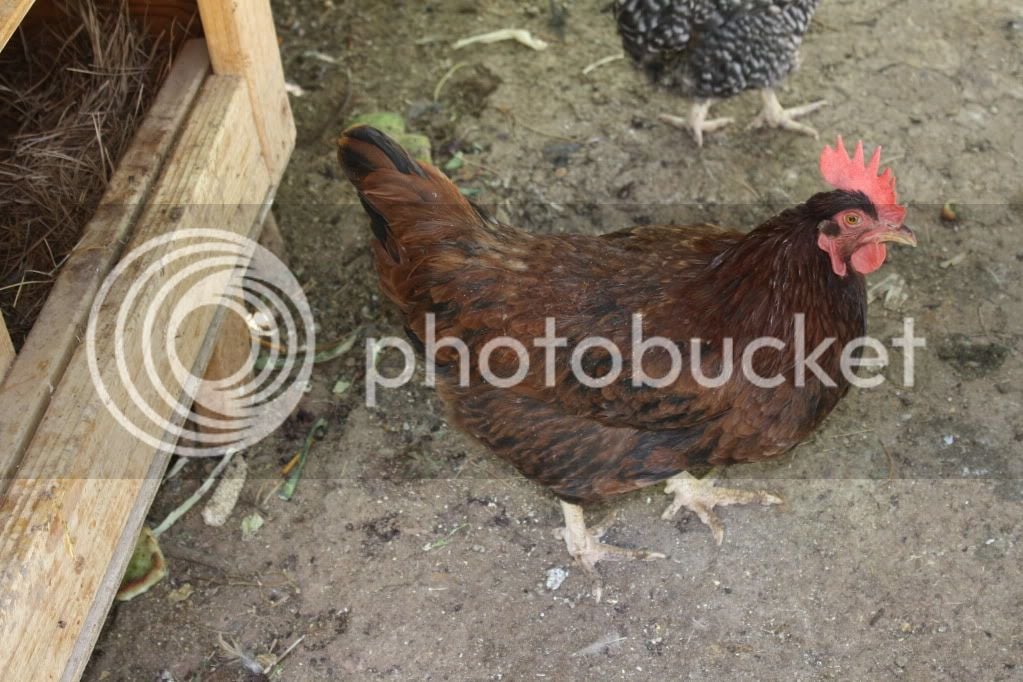 Fred and George- Fred on left, George on right 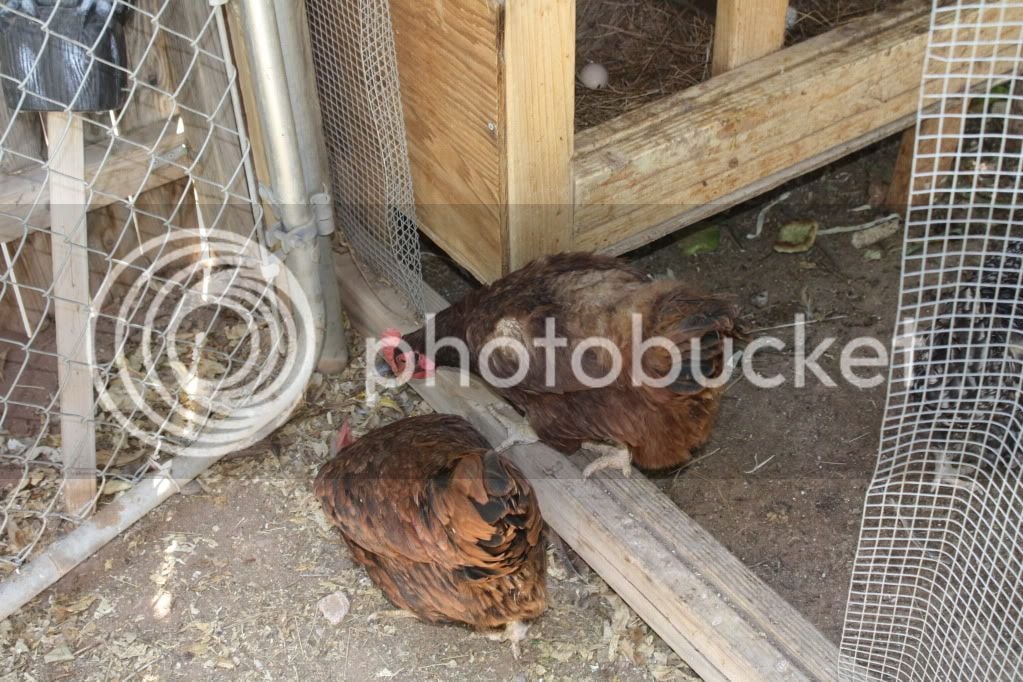 Henrietta- wing and fluffy back 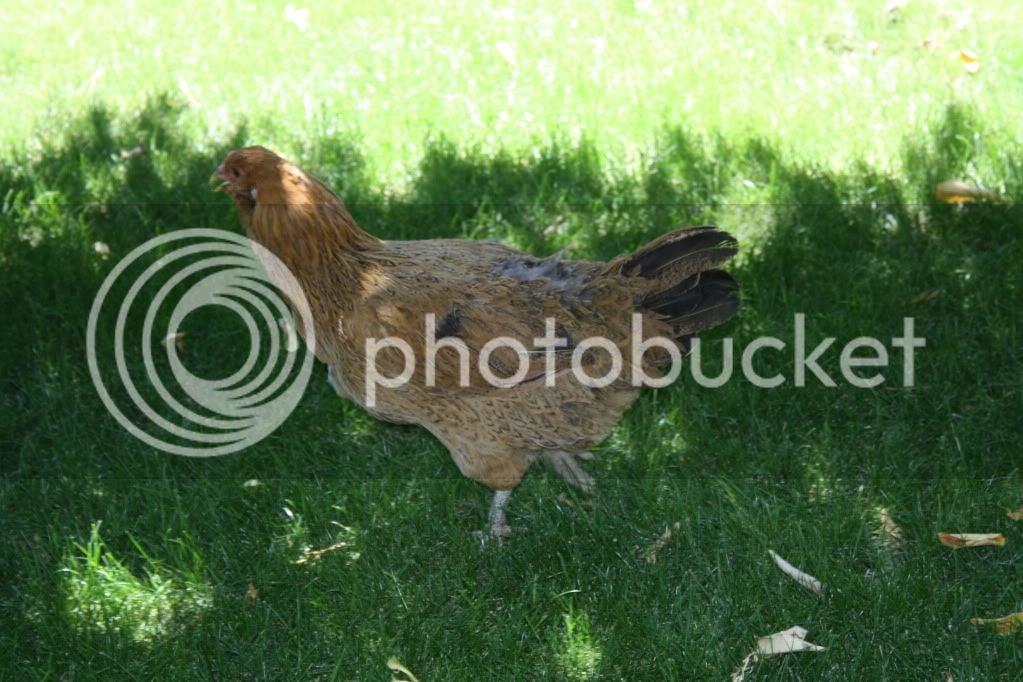 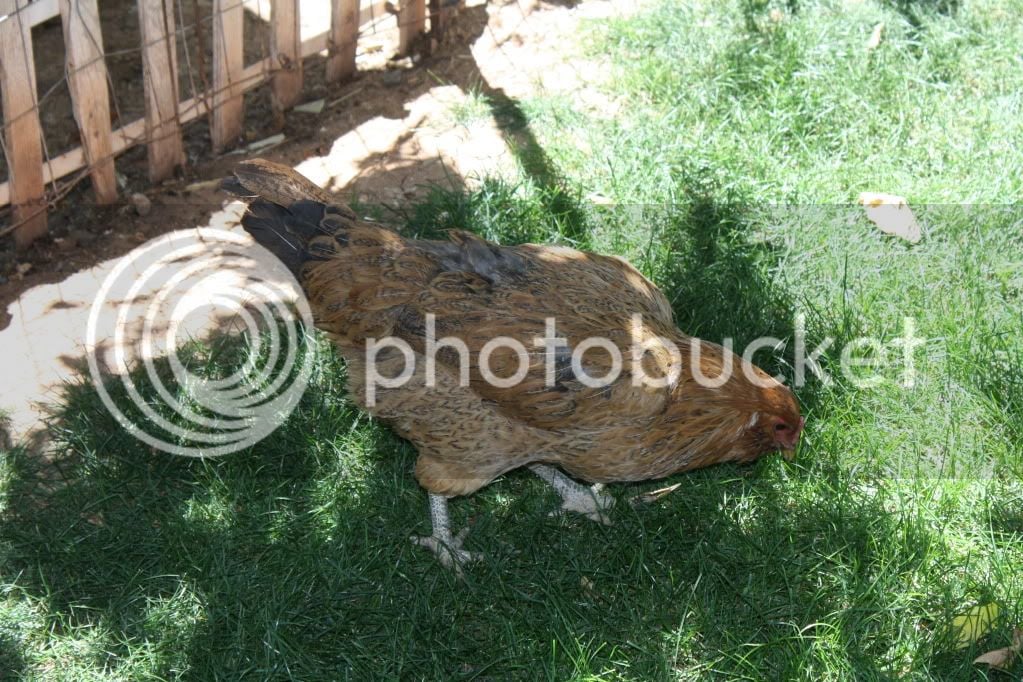 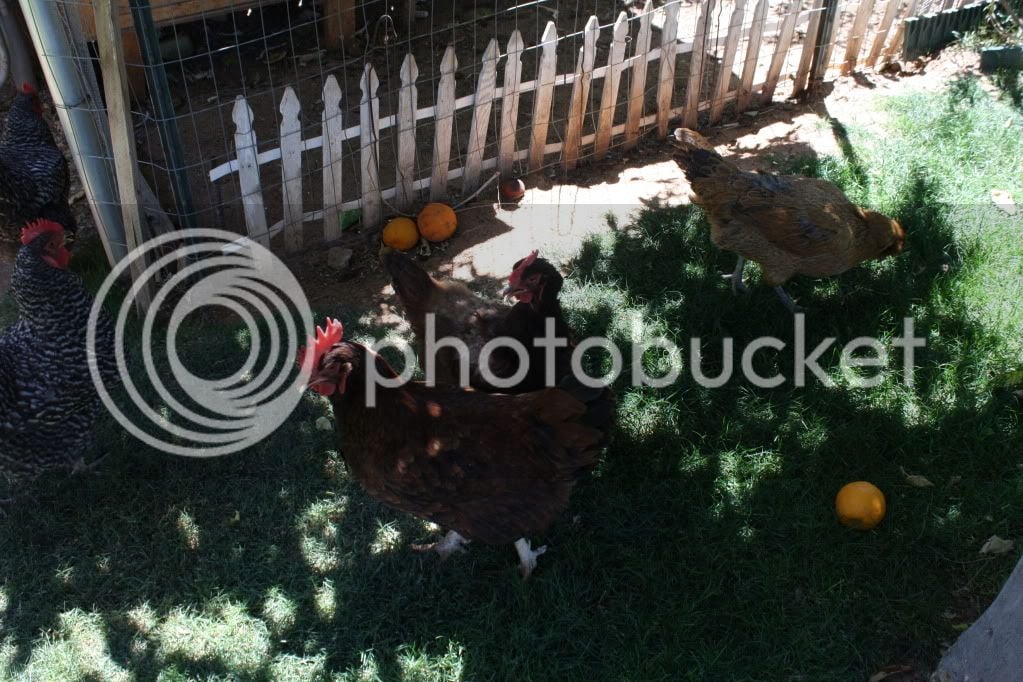 If you think you need (or want) more pictures of a certain chicken to help diagnose, I can take more.

Are they lower on the pecking order? They could be getting their feathers plucked out by the others, or it could be lice.

It looks very much like overbreeding to me. Do you have an active roo? George looks like a favorite.

I thought of lice/mites and needing more protein in their diet. It doesn't look like a molt, and it could very well be feather picking. There are a few threads on the FAQ page about pecking and feather picking. The usual causes are low protein and too little space.

Henrietta is the lowest in the order, and I think George might be in second.
We have six hens and no roosters.

I'll try and get some more protein into their diet and let them roam more often. Then they won't be cooped up and maybe find some bugs.
I'll also check out those threads. If that doesn't help, I'll be back.

Thank you for your advice!

Feathers On The Ground

Quote:
that's exactly what I was thinking. I have a girl that looks like this. I have a very active roo that is being rehomed next week. I'll be glad when he's gone.

Quote:
that's exactly what I was thinking. I have a girl that looks like this. I have a very active roo that is being rehomed next week. I'll be glad when he's gone.

I'd even guess that it's a dominant hen treading the poor subordinates. It's the exact pattern of breeding breakage, down to the bare shoulders.

You might double check on the roo...does a neighbor have one?

More pictures of the hens and their coop: 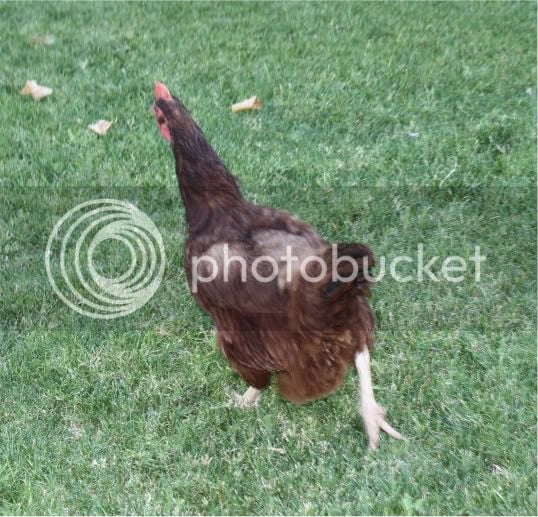 (The chickens are not allowed to eat and are not given any citrus to consume.) 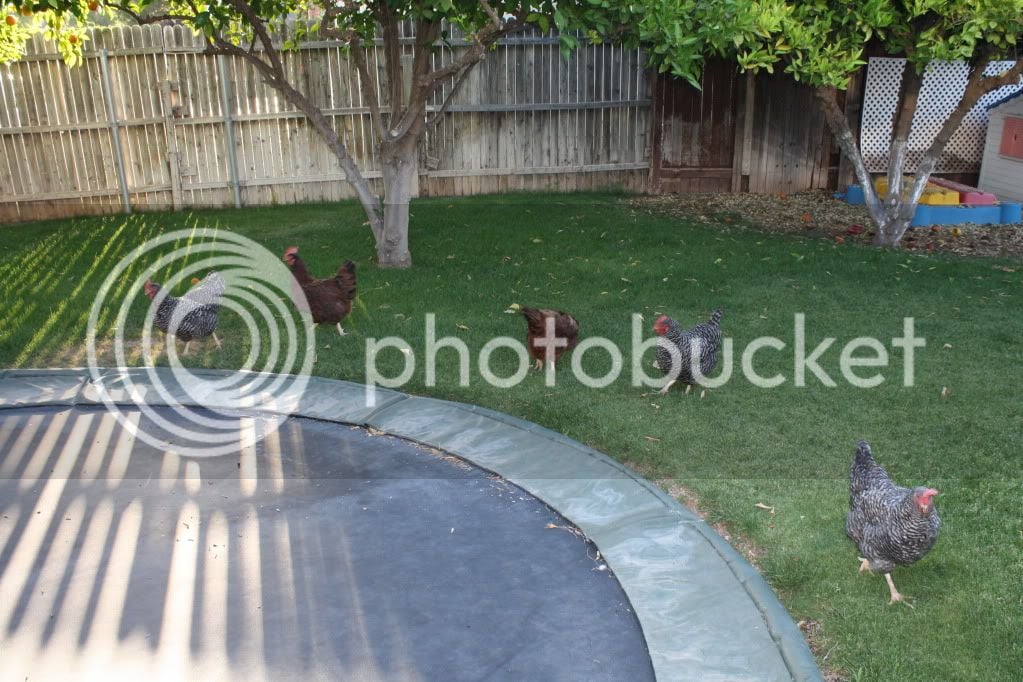 None of our neighbors have a rooster. But now, if we do get one, I'll know why my chickens have such weird bald spots.

How strange!! Its exactly like rooster over-usage...or as some refer to it: testosterone poisoning.

It could simply be a molt, but I'd look to a dominant hen positioning herself as a roo for reinforcement.

I'd look for who has the best looking feathers, and weight and then separate her from the others for a week and see if things start to get better. You will have your answer.

Is my hen molting?

What would cause two seemingly healthy hens to suddenly die?

P
Sole chicken has thinning wing feathers, but recovering from mites and molting?

Molting during a rainstorm
2