How do you make a frizzle?

I was reading the mcmurry hatchery catelog & they said only 3/4 of the frizzle eggs will actually frizzle. It also said they dont breed true.

So that means two frizzles will not make frizzle babies.

So - how do you make a frizzle?

Two frizzles do indeed make frizzles, however you will also get "frazzles," a serious defect of having brittle, often broken, and often lost or missing feathers. A trait that Murray McMurray does often breed.

Frizzles are made by crossing a frizzle x non-frizzle. But only 50% of them will be frizzled in the offspring.

Frizzling is just the feather's curl, it isn't a breed. There are several breeds with frizzling, but hatcheries like McMurray only offer frizzled Cochins.


The most awesome frizzle out there are frizzled Polish. . . 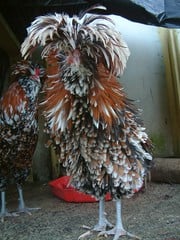 Yep, Illia is spot on

Especially about the polish frizzle! Totall agree with the frizzle frazzle comment and yep, I get 50% frizzle too. I dont know if anyone else has noticed this, but has anyone else found the frizzles are bit more energetic and scatty than their flat feathered counterparts? it is also important not only, NOT to breed frizzle with frizzle, but not to breed for too much head beard and muff plumage so as the poor birds can't see!
Illia - what colour is your polish frizzle in the picture? beautiful!

Wow - thanks for the info.

So what you are saying is if I have a frizzle rooster & breed him with my buff orpington - I'll have 50% fat curly buffs & 50% will look normal.

I can breed frizzle to frizzle but it causes genetic issues with the feathers breaking. That has to be uncomfortable.

I need to find a frizzle rooster & start experimenting! I'm going to turn into Dr Frankenstien!

In this case I need a blue or white crested frizzled polish rooster.... great information!!