I want that nest.

Well I have 5 hens and only 1 is laying, but this morning as she was on the nest I saw one of the others climb on top of her and tried to squeeze in next to her.
I've seen video clips where this happens as most of you know they can ignore the other nest and seem to have a favourite.
with me only having 1 still laying I only had 1 nest box in the coop, I had another 1 handy and quickly put some straw in it and put it down near the original 1, she did go in it but came out again to go back in the other where the hen was laying.
Then she gave up and came out, lo and behold another 1 did the same, but it was just 1 try then came out.
Eventually the 1 laying left the nest leaving me a nice egg, this had me slightly puzzled because here in the UK it is going dark around 4p.m. and starts to come light around 7.15a.m so the daylight is short.
I wouldn't have thought these other 2 hens would be wanting to start laying, in fact I'm waiting for the 1 still laying to stop soon as she is laying a lot of soft shell eggs, I'm hoping by Spring she will get things in order lol.

So can they start laying again especially as it is short daylight and Winter round the corner or is it something else that made them do this?

Don't know - I have lots of summer borns that haven't started laying so I'm guessing they'll wait now until the spring. My Araucana did start laying about a month ago which surprised me due to the light diminishing so much - laid maybe 8 eggs and has stopped again! From the 4 I have currently laying I get 3 eggs most days and some 2 egg days. 2 of the girls are production birds so guessing they'll maybe keep laying through this winter (they are just a year old now). Funny little things - it is all a mystery

Do they have oyster shell available ? Just wondering if they are having issues passing some late eggs.
should have asked- what ages are they?

Wow! What a surprise, I just looked in after about 3 hours and there was an egg in the nest, it's a small egg but good shell, I now need to find out who's it is, I have an idea it's that one from earlier but I will make sure.
So it looks like I will need to add another nest box or two, but they jostle for the favourite one lol.

Pullets usually lay all thru the season their first year.

@Cragg Klefor, Yes they have Oyster Shell and grit, I did have a Maran that laid good eggs but she stopped a while ago, it is this Black Rock that lays the soft/brittle eggs.
sometimes I catch her and get the egg before she breaks it, she isn't eating them she breaks them moving about in the nest.

The one I think is the one started to lay is this grey one, though I'm not sure what breed she is: 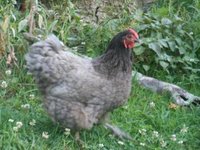 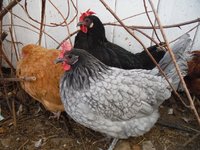 These are not my pics but she looks like any one of these grey ones, she is a big bird with a large comb.

For 5 birds 2 nests are plenty, put a fake egg in both...might stop them from 'sharing' a nest.
Trying to remember, so you know how old these birds are?
The 'nest dance' can be crazy.

If they are pullets, some or all may lay through the winter. The first bird pictured is a flat out beauty.

Depends on the breed. I have 3 Black Australorps that lay all winter. Where as my Speckled Sussex and Welsummer have stopped.

Hen laying 2 eggs at a time