Is this a malay mix?

First I would like to excuse my English, and also my lack of skills regarding chickens. What I know I mostly learned here.
This chicken was found alone on the street after the Easter holiday (April 20), only about a week old. Probably used as Easter decoration and tossed out when it was over. So it is no way to track its origin.
My daughter brought it home from the public farm where it was delivered by the finder. It was too small to survive, so she volunteered to bring it up to size on her own. Well, we live in a flat at 5th floor in the middle of a city, so yeah; it was a bit... weird. But it turned out to be big fun. She was a part of our family for about 5 months.

Below I will post the latest pictures, as those are easier to classify. I have plenty pictures of her stay with us at bxp.no, but I’m afraid the website is in Norwegian.

She is not the most social bird. She likes to follow the people it knows around, but don’t like to be petted. I’m the only person she clings to, but lately she started to pick on me too. She can be very aggressive if cornered, by man or other fowl (especially turkeys). She also is a clever thief, some visitors at the farm toss her crumbs, but she ignore the crumbs and jump up and go for the whole thing, cake, bread or whatever it is they are eating, often with success. I guess our socializing her as a house pet is to blame for her lack of fear and respect of people.

None among the staff know what she is. Some said she may be a sort of ”fighting fowl”, but in my view she does not attack or fight that much, she just don’t give in. Now even the turkeys and pea fowls who used to pick on her have respect for her. However, I have no knowledge, so I can’t tell.

About Aldo (her name)

I think she looks a lot like a wheaten Malay, but her comb is wrong, also her neck (and legs?) is a bit stumpy. Her size is pretty much the same as an Italian, but she is more compact, she feels very heavy and solid.
She looks like an eagle with comb, the stare makes most people avoid her.

What I wonder is:

Is she a particular breed, or is she a mix?
Is there “hot blood” in her (is she of an aggressive breed) that could make it impossible to have her among children and other birds? Will she change when she is mature? The answers will be important in order to determine her future. We may have to move her to a normal farm, without visitors. If she becomes more aggressive she may have to be taken out.
I’m told she laid her first small egg right after the last picture in this post, which is about 22 weeks after she was found. This post became way longer than intended. If you still read, here are the pics: She's very tall. Beautiful though. I looked at some pictures of a Malay and she's built like one. I think she's a cross between a Malay an some unknown other breed.
Last edited: Oct 22, 2014

Here's a flock of Malays 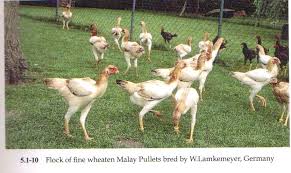 Either way this breed is not for beginners. They roosters are aggressive and the hens are predatory.

A few hatcheries are breeding these breed and you will find these birds lacking the characteristics of a bird from a serious breeder.


And welcome to BYC!

She's probably a mix of several Oriental breeds, including the Malay or Aseel. Personally, I think she looks a little more like an Aseel than like a Malay.

Thank you so much for the answers. Yes, I agree that she looks like an Aseel too. But I can't make that decisive call of what she is.


I red some of the reviews of Aseels, and most fit her. She is social (to those she knows), intelligent, guarding, tough and steadfast. Aldo is borderline aggressive to other people and fowl, but she is more docile and dont try to attack/intimidate like before. I do think she is more intelligent than the other hens and roosters at the site. I just hope she dont turn predatory.

There is some new info about her. She have started to lay, and in a short time had 5 eggs. She is a very determined hatcher, and seldom leaves her eggs. She makes a very threatening hiss and expand her feathers to look larger when visitors get too close when she is on her eggs.
She dont attack or pick, even if she try to scare, and I can gently lift her wing to look at her eggs. I dont know if that is just me, or if she would let anyone else do that as well. Her scare tactic is very effective. She still remember me, and she still came when I called for her just before she laid her eggs.

I must say the responce is very nice, and thank you for the greeting

Have you considered,Yamato Gunkei. I do not know too much about the breed. The recently became available in the US at Greenfire Farms, and your resembles the breed. According to literature i have found as well as Greenfire Farms,The Yamato Gunkei is an ancient ornamental fowl from Japan that was bred to extraordinary effect by exaggerating a number of physical traits. It is the largest of the small Shamo breeds, and it has the muscular dinosaur-like legs and feet of the Shamo family. Its breast muscles are so large that they part the feathers to reveal deep red skin underneath. But, its most striking feature is its wrinkled face; wrinkles that begin at a few months of age and that quickly multiply as the bird grows older. They have pea combs like yours!

what gender & breed is this?

Help! I think Dolly may be a Donald
2