Who would have thought that the possibility of dementia might arise in my flock? And how about just discovering another old girl may be going broody?

My three-fourths blind twelve-year old Light Brahma Lady Di is displaying signs of dementia, or whatever you would call it when an old fat hen makes constant noises of grumpy discontent. Mostly she lies about on her Cleopatra cushions with her other ancient friends. In between, she's sending out fog horn signals and stumbles around searching for, I don't know what.

She is mostly blind now, but she can locate the food bowl, most of the time, but actually hitting the target can be a prolonged exercise. I make food available where she can find it, and also water, since it's gotten hard for her to target the vertical water nipples. But this morning, instead of going directly to the big bowl of fermented feed in the coop where the old biddies are fed, she stumbled off to a corner as if she wasn't sure of where she was heading. She eventually came back to the water bowl. Her health is good in every other respect other than for the tumor on her head she's had had half her life.

The other hen, my ten-year old GLW Su-su has been laying regularly for the past three or four weeks, even some acceptable egg shells among them. Yesterday, she laid a shell-less egg, and last night she spent the night in the nest and there was another shell-less egg under her this morning. None of this is remarkable. What has me in a state of wonder is that Su-su is now displaying all the signs of being broody. Who can mistake that broody clucking?

The reason I'm posting this, and I know I would be in rare company here, but have any of you had old hens with these issues? Or heard of these things going on with old chickens? I mean, going broody at age ten? Heck, I feel as caught off guard by this as I would if I'd just found out I was pregnant, a damn rare event for a 78 year old woman. 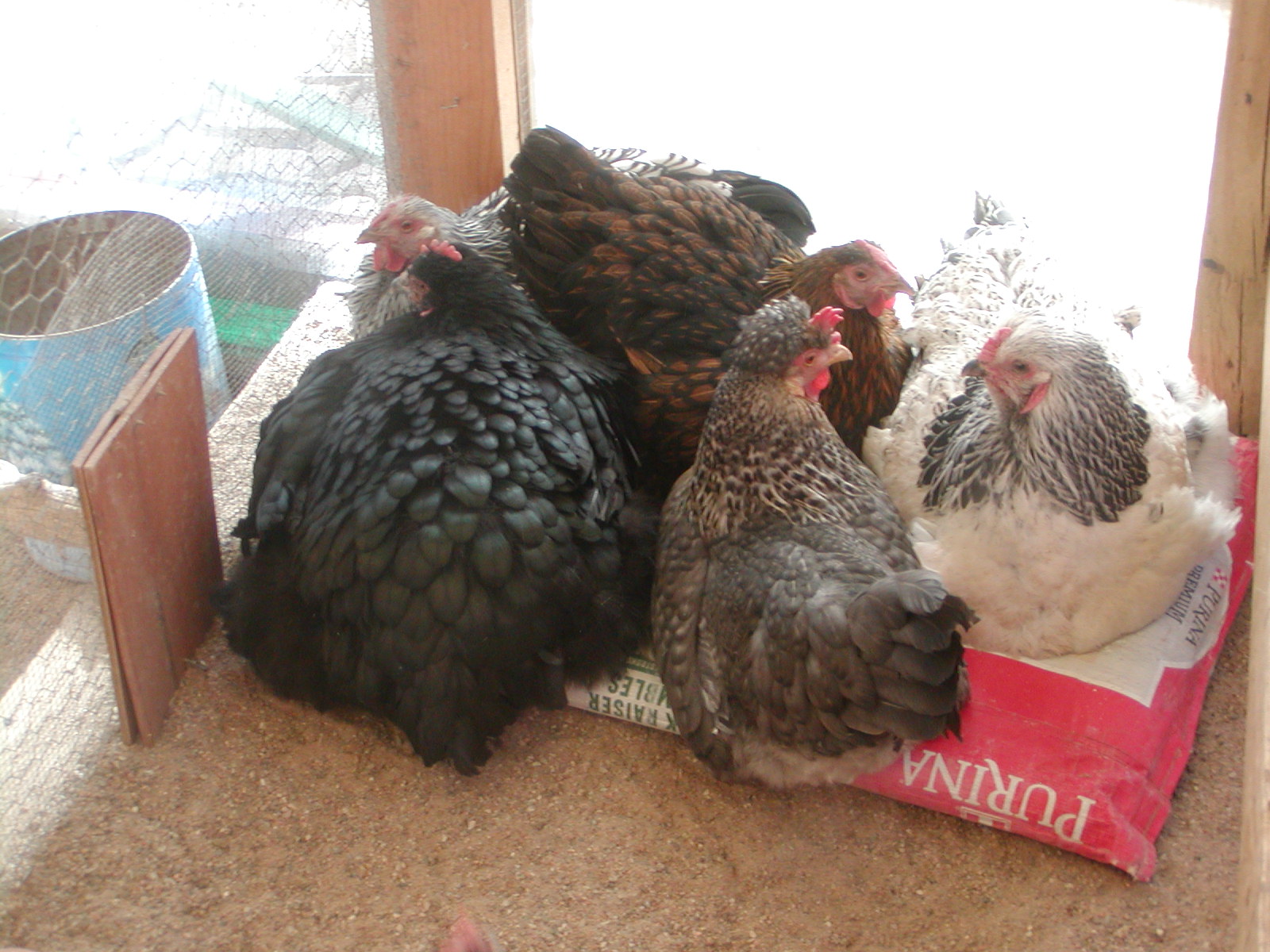 Su-su and Lady Di are the ones in the rear and far right.

Oh, the thinks you can think up if only you try!

I think it's amazing you have girls that old, what a pretty bunch of girls! I also dig the pillow

Inner ear issues and sometimes what appears to be arthritis set in. With game hens, I back off on the layer / production feeds in favor of lower calorie mix that has lots of greens. A lower roost is provided as needed.

Lady Di and her pal Morgan the Black Cochin have a roosting perch a foot off the coop floor, and I need to left both old gals onto it each night. Lady Di overshoots it if she tries and ends up wedged between the perch and the wall on the floor, and Morgan won't even try because she is the laziest chicken in the universe.

Wow, the Golden Girls and Maude, near right.
I don't have advice, my oldest girl was 49 months old. GC

Su-su is still acting broody, but I've decided it is a "partial" broodiness like the time a number of years ago when she did the same thing to care for chicks I had in the run at that time. Those were about the age of these, five or six weeks old, and she cared for them until they were four months old. She's been showing the same signs of "caring" for the present chicks, even though they really require no care at this point.

I should call her Granny Su.

Lilith, by the way, the eleven-year old SLW hen in the rear left, has been laying shell-less eggs. There was one on the poop board under her this morning. This got her into trouble last year when an egg collapsed inside her. She survived a nasty infection and prolapse that time. That she's still alive and in good health is miraculous.
V

I can only hope to have a long term flock like that at some point. Maybe my 8 new mixed breed ones will outlive the older ISA Browns I have that are dying off one by one at only two years of age.

What's your secret to success with long lived chickens?

My chickens get a lot of love. They also have been getting fermented feed for around ten years. My hens lay regularly well past the expiration date on their reproductive systems. My Welsummers are seven years old and laying as regularly as when they were young.

I even have an avian leukemia in my flock, so it's even more remarkable.

Yesterday, Lilith the eleven year-old SLW, turned up with another prolapse and dripping white mucous from her vent. She's on calcium and penicillin for a probable collapsed stuck egg. I've been treating the prolapse with witch hazel and cortisone cream. She spent the night in a crate in the garage since her vent had been injured before I discovered her plight.

Now, 24 hours later, still no egg remains and the prolapse is improving. I decided to move her in her crate back to the run. She immediately set up a chatter to let everyone know she was back and still second in command. It was hard to miss the difference in her mood, from mute to chatty when she was reunited with her flock. Goes to show how much better a chicken feels when permitted to remain with the flock while recuperating from illness.

Having aging chickens in a flock is definitely risky. It's little wonder that a lot of flock managers cull chickens when they approach "middle age".

azygous said:
It's little wonder that a lot of flock managers cull chickens when they approach "middle age".
Click to expand...

So far most of the hens I culled were having laying issues. Egg bound, Prolapse and internal laying. The one exception was an egg eater. She would eat half the eggs she laid. Good strong shells. I believe she got a taste of a soft shelled egg and started pecking good eggs. I caught her in the act. GC

How long should I separate an aggressive chicken?

Food and water spills from chicken’s beak when she bends down to peck at the ground.

J
Is my pullet broody or having eggs stuck inside?