It's Official...Deville is a Roo!

We have three new EE/Ameraucanas about 10 weeks old. When they arrived one of them had markings that made her look like a villianess so she was named Cruella and one looked liked our older EE named Sandy so we named little one Cindy. The third one look sorta like a bird of prey and so we decided to name her Deville. So we had cruella deville. hehehehe Anyway, I suspected Deville of being a roo yesterday when someone in the baby tractor crowed and he was the only one not looking surprised.

This morning while I was carrying him to their tractor, the neighbor's BO Roo, Brewster, did one of his morning crow to the neighbors. Deville balanced on my hand, pulled that neck up and let loose the most off pitch pathetic yet cute crow in response. He looked at me with this look on his face that said "HA, I can do that too!" His little chest was puffed out about it too.

So, no more searching for the right friendly roo for my girlies...I have him. Let me introduce you to Eggtopia's little Roo, Mr. Deville! 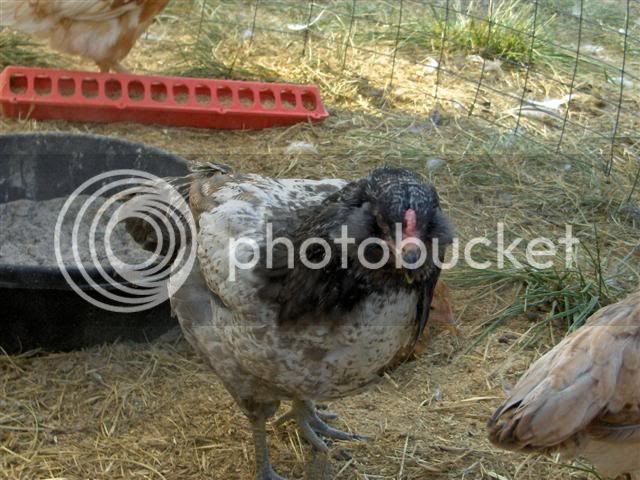 Nice to meet you Mr. Deville

I'm glad it worked out just right for you and your girls.

Thanks gritsar! He is such a sweetie and already protective of his girls. One of my big girls (28 weeks) was strolling by their tractor today and Deville fluffed all up and ran over to the side where my big girl was and gave her the fuss. He even pecked at my big girl, who promptly replied with a peck of her own and then walked away. But he was The Little Man.

have I got a STORY!