My 25-week old Cream Legbar pullet has been virtuallly lame for over 8 weeks. This pullet was vaccinated against Marek's, and has not suffered any visible injuries. The backyard flock of 8 pullets is closed, in a new facility, in a new location, with a fully enclosed large backyard run. No biosecurity breeches have occurred.

Initially, we treated her at home using B-complex vitamin crushed and placed on her food, and poly-visol w/o iron on mealworms. She improved for 3 days, then reverted to remaining inside the coop, in a crouched position.

We took her to an exotic animal vet, which was not very insightful. Mentioned injury and Marek's as possible causes, and offered euthanasia.
We inquired about Marek's blood testing by Texas A&M (which we had brought computer printed information from their website) and the vet drew and sent a sample. We await the result.

The vet gave her IM injection of vitamin B, treating her for pernicious anemia. We were hopeful, but this showed no improvement.

The hen has never laid an egg, and is behind her siblings in physical devlopment.
She is not sneezing, and continues to limp over to feed herself and to the waterer, but she's not thriving.

In the video, at 57 sec, she can be seen yawning. She yawns fairly frequently. She also shakes her head at 1:11. 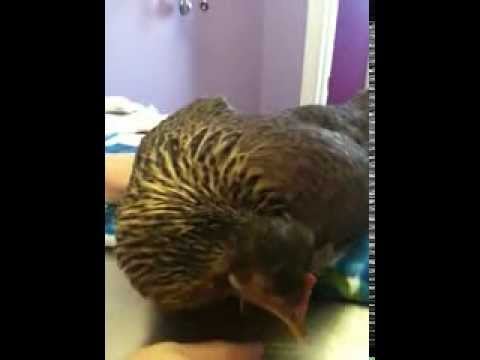 Confirmed on 30-Sep via blood test that she has Marek's disease. Sad day.

The occasional yawn is probably her just adjusting her crop, not gapeworm. I would go ahead an worm her though just because she probably has other worms, especially if you are worming your other birds. Valbazen cattle and sheep wormer is the only one that gets all worms, Safegard Liquid Goat Wormer is also good, just doesn't get tapeworm which is rare.

Jul 29, 2021
HeatherChickenMom
H
K
How long it takes to die from Marek?

K
Chicken unable to stand for the last 4 weeks!